Viewers have called for Maxine Peake to be boycotted after she shared an anti-Semitic conspiracy theory about George Floyd’s death – the latest in a history of outbursts from the actress.

The inflamatory remarks saw Labour politician Rebecca Long-Bailey sacked for sharing them, with leader Keir Starmer standing firm this morning to resist calls to reinstate her from hard-left supporters.

But it is just the latest in a string of controversies from Peake who has years of form in contentious comments, including calling for ‘violent revolution’ in 2017 and claiming there were ‘no working class actors’ in Hollywood in 2011. She also bemoaned in 2014 that actresses with accents were taken ‘less seriously’.

Indeed she gave her now-infamous interview with the Independent when she was supposed to be in Palestine with activists.

And while she portrays herself as a dyed in the wool socialist she was brought up in a family she said aspired to be ‘middle-class’.

She only got into politics after moving in with her late Communist Party member grandad Jim Taylor who told her about the cause.

In 2014 she paid tribute to him at Bolton Socialist Club as she received an award for her contribution to socialism, describing it as ‘better than a Bafta’.

Last night there were calls for Peake, 45, to be dropped from acting roles for the remark on Mr Floyd and Israel, with people urging the BBC to stop using her. 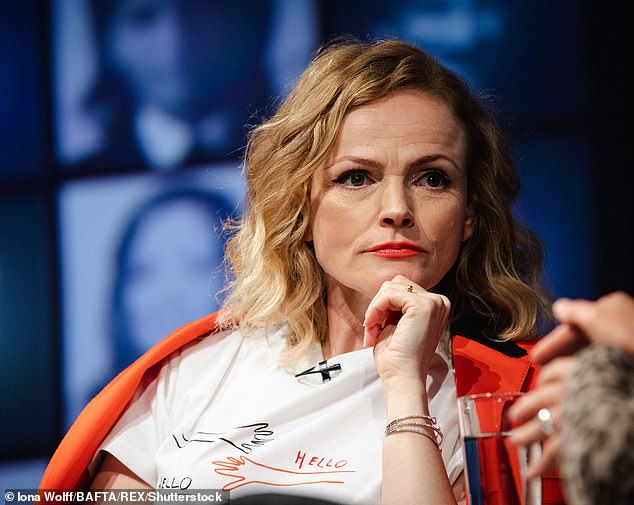 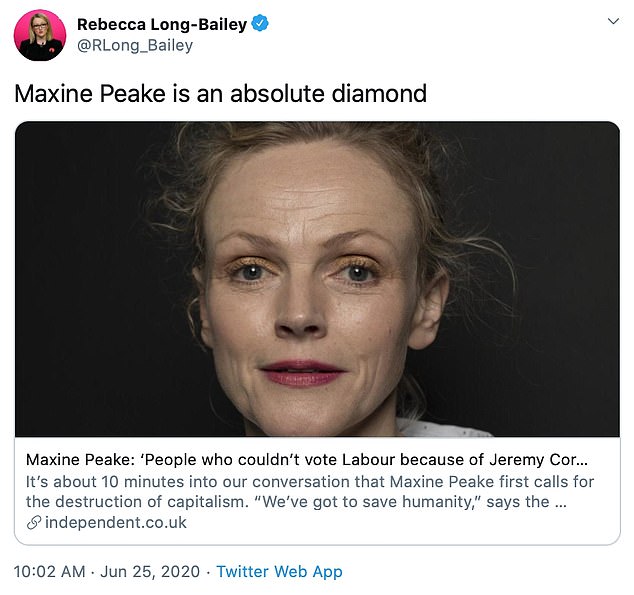 Rebecca Long Bailey was sacked from the Labour frontbench by Keir Starmer yesterday after retweeting a link to the article with the caption ‘absolute diamond’.

Peake practice: from Communist to Socialist

Maxine Peake’s political leanings were forged in her childhood by her grandad.

The actress grew up in Bolton, Greater Manchester, in a working class family.

She said in an interview with the Guardian both she and her late mother Glynis aspired to be middle-class at the time.

When her parents divorced when she was just nine and she carried on living with her.

She went to school with Radio 2 DJ Sara Cox and even worked as a lifeguard with Take Me Out host Paddy McGuinness,

When her mother moved away to live with a new boyfriend, Peake went to her grandad Jim’s house to stay, who she said was a communist.

She said in an interview with the Guardian the grandparent became her mentor and gave her a political education.

She said in 2018: ‘My grandfather had a life-changing influence on me. He never had any ambitions to be a politician – he worked on the assembly line at Leyland Motors – but his life was politics. He was a self-educated man and he had a thirst for knowledge. He was a member of the Communist party

‘I left the Communist party at 21, when I went to London to drama school, for no other reason than that I could not fulfil my commitments to it. But I am still a socialist.’

One said ‘Perhaps it should also consider not contracting Maxine Peake’ while another simply declared ‘another actor to boycott’.

It came after the head of Britain’s biggest Jewish community group said the actress – who is a former member of the Communist Party – did make an anti-Semitic remark.

President of the Board of Deputies of British Jews Marie van der Zyl condemned Peake’s comments, which linked the American’s death to the Israeli Secret Service.

The Shameless actress rowed back on her remarks last night and insisted she was against any form of discrimination or racism.

But Mrs Van Der Zyl said: ‘Rebecca Long Bailey retweeted an interview and in that interview she called Peake a diamond. We challenged Long Bailey on the retweet and she issued a clarification.

‘We wrote to her at 12.19 and made it clear that we were concerned that she was repeating the conspiracy that Israel was somehow responsible for the murder of George Floyd.

‘This was anti-Semitic because somebody has dreamed up a theory that links Israel to the horrific cold-blooded vile murder of an innocent man.

‘The Israelis had nothing to do with it and there is a group desperate to blame them and Jews for every wrong in the world.

‘I don’t think anybody comes out of this happily – and Rebecca Long Bailey’s response was pathetic and as someone who wanted to be an Education Secretary she would be expected to read and understand things. Peake should also have been fully aware of what she was saying’.

Peake, 45, came under fire yesterday after claiming Israeli secret forces taught US police tactics which killed George Floyd. Her comments have led to a political backlash, with Rebecca Long Bailey being sacked from the Labour frontbench after sharing the article.

Peake, a Jeremy Corbyn supporter, also called for the overthrow of ‘capitalist, fascist dictators’ and ‘systemic racism’ by violent revolution.

Yesterday the Campaign Against Anti-Semitism group condemned Peake, saying that her ‘views have no place in decent society’.

The actress has now issued a clarification, insisting that she was ‘inaccurate in my assumption of American Police training & its sources’.

Peake said she finds ‘racism & antisemitism abhorrent & I in no way wished, nor intended, to add fodder to any views of the contrary’.

However, her statement, released nearly 12 hours after the Independent article was published, did not contain an explicit apology.

Some viewers called for Maxine Peake to be boycotted, urging the BBC not to employ her in future 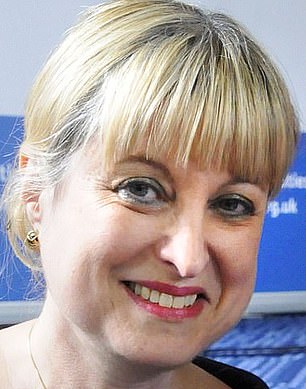 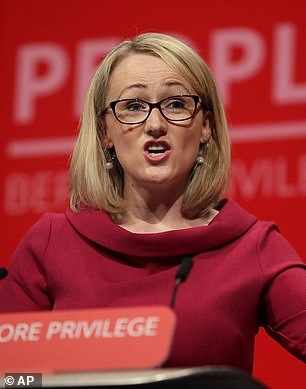 President of the Board of Deputies of British Jews Marie van der Zyl (left) condemned Peake’s comments, which linked the American’s death to the Israeli Secret Service. Rebecca Long Bailey (right) was sacked from the Labour frontbench after sharing the article

‘I feel it’s important for me to clarify that, when talking to The Independent, I was inaccurate in my assumption of American Police training & its sources,’ she tweeted.

‘I find racism & antisemitism abhorrent & I in no way wished, nor intended, to add fodder to any views of the contrary.’

In her interview with journalist Alexandra Pollard, Peake called ‘systemic racism’ a ‘global issue’ and called for the overthrow of ‘the establishment’.

She then alleged: ‘The tactics used by the police in America, kneeling on George Floyd’s neck, that was learnt from seminars with Israeli secret services.’

This statement has been denied by Israeli authorities.

Her comments were criticised as appearing to be a variation on the ‘blood libel’, where Jews are held responsible for the death of others.

The Campaign Against Anti-Semitism said: ‘Maxine Peake’s disgraceful promotion of a conspiracy theory tying Israel to the racist killing of George Floyd is unacceptable.

‘Moreover, her attempt to shame those who felt threatened by the prospect of Jeremy Corbyn, an antisemite, becoming Prime Minister, is also outrageous.

‘It is regrettable that Rebecca Long Bailey and another Labour MP retweeted the interview but it is to their credit that they later clarified or deleted their tweets, recognising… that Ms Peake’s views have no place in decent society.’

Board of Deputies President Marie van der Zyl said: ‘I would like to thank Keir Starmer for backing his words with actions on anti-Semitism.

‘After Rebecca Long Bailey shared a conspiracy theory, we and others gave her the opportunity to retract and apologise. To our surprise and dismay, her response was pathetic. Her position as Shadow Education Secretary was therefore untenable.

‘There can be no space for this sort of action in any party and it is right that after so many challenging years Labour is now making this clear under its new leader.’

Jonathan Goldstein, chair of the Jewish Leadership Council (JLC), told MailOnline: ‘Today (Thursday) we saw significant action from Sir Keir Starmer in ensuring there is zero tolerance for anti-Semitism within the Labour Party.

‘His actions show he understands the severity and harm that anti-Semitic conspiracies do to our politics.

‘We welcome this decisive leadership and firm action.’

Sir Keir had previously vowed to wipe out the ‘stain’ of anti-Semitism from Labour and rip out the ‘poison’ that dogged the party under his predecessor. 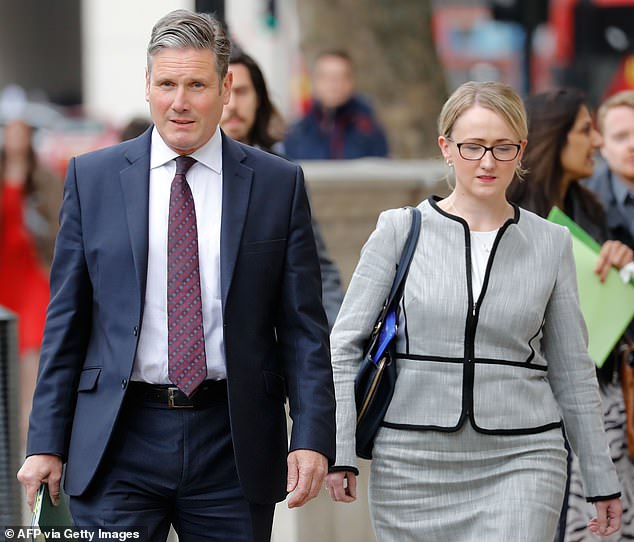 ‘We have to face the future with honesty,’ Sir Keir said.

‘Anti-Semitism has been a stain on our party. I have seen the grief that it’s brought to so many Jewish communities. On behalf of the Labour Party, I am sorry.

‘I will tear out this poison by its roots and judge success by the return of Jewish members and those who felt that they could no longer support us.’

‘It’s entrenched, isn’t it? We’ve got to the point where protecting capital is much more important than anybody’s life. How do we dig out of that? How do we change? 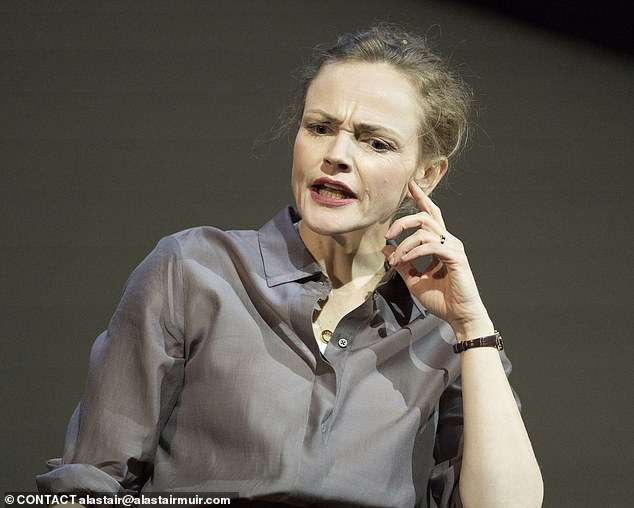 ‘With what’s happening in America at the moment, it’s about financial control. It’s about keeping the poor in their place.

‘I don’t know how we escape that cycle that’s indoctrinated into us all. Well, we get rid of it when we get rid of capitalism as far as I’m concerned. That’s what it’s all about. The establishment has got to go. We’ve got to change it.’

Peake campaigned for Labour at the December election, and also turned her fire on traditional Labour voters who felt unable to back the party under Corbyn.

‘Those people who were normally Labour supporters who felt they couldn’t vote Labour? Well I’m sorry, they voted Tory as far as I’m concerned,’ she told the newspaper. ‘And it breaks my heart, because you know what? I didn’t like Tony Blair, but I still voted Labour because anything’s better than the Tories.

‘There’s a lot of people who should hang their heads in shame. People going, ‘Oh, I can join the Labour Party again because Keir Starmer’s there’, well shame on you.’ 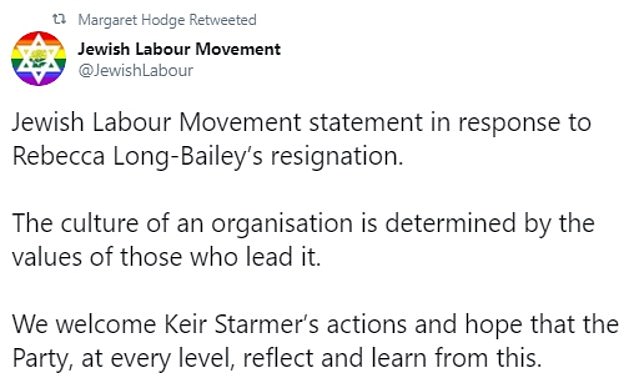 Labour MP Dame Margaret Hodge, who is Jewish and was a leading critic of Jeremy Corbyn, said: ‘This is what zero tolerance looks like.’ Jewish groups also lined up behind the move

She also managed to throw in a backhanded jibe at Sir Keir himself, saying: ‘I think people will get behind Starmer, won’t they? He’s a more acceptable face of the Labour Party for a lot of people who are not really left wing. But that’s fine. Whatever. As long as the Tories get out, I don’t care anymore.’

In her interview with The Independent, Peake also praised the role of actors in the world, adding: ‘I’m not saying we are the saviours of the human race, but a lot of people have a television.’

Rebecca Long Bailey was sacked from the Labour frontbench by Keir Starmer after retweeting a link to the article with the caption ‘absolute diamond’.

After her sacking, Ms Long Bailey said she had merely ‘retweeted an interview that my constituent and stalwart Labour Party supporter Maxine Peake gave’.

‘Its main thrust was anger with the Conservative government’s handling of the current emergency and a call for Labour Party unity,’ she said.

‘These are sentiments are shared by everyone in our movement and millions of people in our country.’

‘I could not do this in good conscience without the issuing of a press statement of clarification,’ she said. ‘I had asked to discuss these matters with Keir before agreeing what further action to take, but sadly he had already made his decision.’

Sir Keir justified his action, telling the BBC: ‘The sharing of that article was wrong, because the article contained anti-Semitic conspiracy theories.’

‘As Leader of the Labour Party, Keir has been clear that restoring trust with the Jewish community is a number one priority. Anti-Semitism takes many different forms and it is important that we all are vigilant against it.’

Peake has frequently railed against the ‘crippling austerity measures’ and in 2017 backed the use of violence to install Corbyn as Prime Minister.

Asked if she wanted a peaceful or violent revolution, she replied ‘both’: ‘You can’t have a peaceful revolution now. Terrible thing to say. But we need a coup!’

In 2019, she co-signed a letter backing him in the election, lauding the former Labour leader for his stance against ‘far-right nationalism, xenophobia and racism’.