‘What on earth is THIS?’ Woman blasts Woolworths after her groceries were bagged in plastic instead of paper – but she insists she’s not a ‘Karen’

An angry woman has denied she is a ‘Karen’ after blasting Woolworths for an online shopping blunder.

The Sydney woman posted a lengthy message to Facebook after she paid extra for her groceries to be bagged in paper – not plastic.

But in a mix-up, every individual item came in a plastic bag.

‘Woolworths what on earth is this?’ she wrote.

‘I get my groceries delivered and pay EXTRA for paper bags because I don’t want plastic.

‘And then you put EACH can of cat food in a separate plastic bag and then put the bagged cans into a paper bag! Why?’

The woman said she could understand if the contents of the plastic bag were breakable and likely to spill ‘but it’s a metal can of cat food!

‘The eggs and glass jars weren’t in their own bags, so why this?’

‘I have already stopped buying fresh fruit and veg from you because (aside from being near rotting every time) you put individual pieces of fruit in little plastic bags. Stop it!’

Woolworths introduced a fully recyclable paper bag at stores nationwide earlier this month for environmentally conscious shoppers at the checkout and online. 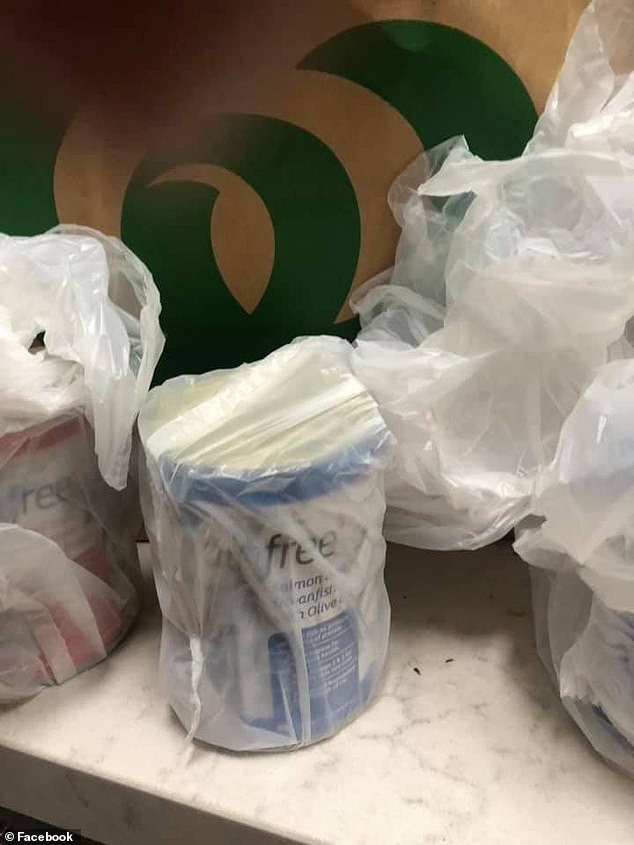 The Sydney woman posted a lengthy message to Facebook after she paid extra for her groceries to be bagged in paper – not plastic. But in a bizarre mix-up, every individual item came in a plastic bag

The paper bags cost 20 cents – five cents more than the plastic reusable bags brought in after single use plastic bags were phased out across the country in 2018.

The furious social media post has garnered nation-wide attention but the woman at the centre of it told Daily Mail Australia Woolworths have not offered her any explanation.

‘I really didn’t intend for it to go as far as it did,’ she said.

‘There were a lot of pretty nasty comments. I believe ‘Karen’ was bandied about fairly liberally.

‘Honestly, I am not a Karen – I don’t have a bob and have never asked to speak to a manager in my life!’

Her social media critics have been harsh.

‘Oh no it’s the end of the world. Stop being lazy and do your own shopping,’ one user wrote.

Another described the issue as a ‘first world problem’.

‘People are lucky they can get groceries on the internet,’ the person said.

‘Yes there can be a few problems, sometimes items are not available and delivery times are sometimes late but overall the benefits outweigh the problems by a significant margin … (it) is really a trivial problem.’

‘To prevent cross-contamination during a delivery we ensure chilled pet food is separated from food for human consumption.

‘Our personal shoppers do this by bagging each chilled pet food product separately, or placing the product in a separate bag dependent on the customer’s selection.

‘On this occasion a personal shopper appears to have separated tin pet food in a bag, which isn’t our usual practice.’