Animal charities are begging Britons not to release sky lanterns during today’s ‘Clap for Our Carers’ salute amid the coronavirus crisis.

The RSPCA warned floating lanterns are dangerous to animals and can have a ‘devastating impact’ on the environment, alongside placing extra strain on emergency workers.

Sky lanterns decorated with a Union Jack have been promoted ahead the nationwide campaign that takes place every Thursday at 8pm to show support for the NHS.

Sky lanterns decorated with Union Jack symbols have been promoted ahead of the ‘Clap for Carers’ initiative on Thursday night, which shows support for NHS workers

But the devices, which are lifted into the air through an open flame, can be eaten by animals or cause entanglement, leading to injury or death.

Farmers have also called to end the release of sky lanterns, saying they pose a fire hazard to the countryside.

The National Farmers’ Union tweeted on Wednesday: ‘Sky lanterns can cause fires, litter our beautiful countryside and injure or even kill farm animals and wildlife.

‘If this is something you feel strongly about, join our campaign to end the release of sky lanterns for good.’

The National Fire Chiefs Council echoed the advice, stating: ‘NFCC is warning a campaign encouraging sky lanterns to be lit as a show of solidarity for NHS workers is “misguided”. 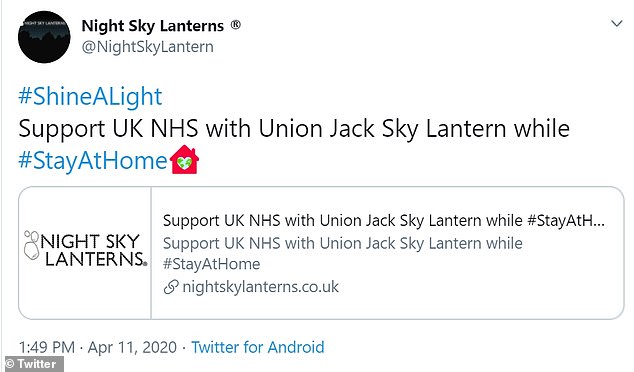 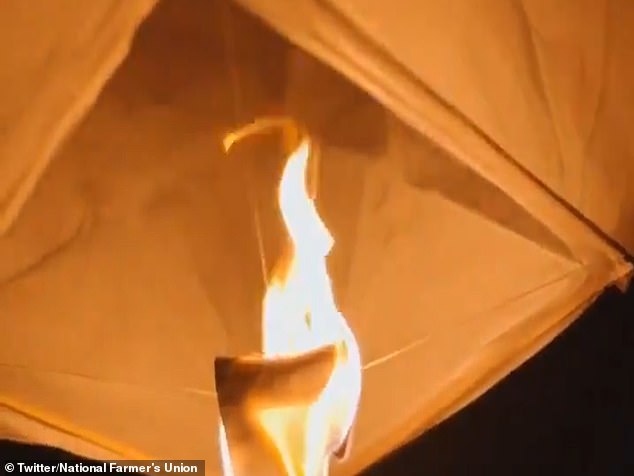 Footage posted by the National Farmers’ Union, which has also called to end the release of sky lanterns, saying they pose a fire hazard to the countryside

‘This could lead to an intensive and complex large-scale incident; time which could be spent supporting vulnerable people in the community.’

Dr Julia Wrathall, the RSPCA’s chief scientific officer, said: ‘It is great that people are looking for ways to show their support for the NHS staff and other key workers at this challenging time – but it is so important people keep sky lanterns grounded.

‘Lanterns may look pretty – but they’re actually just pretty dangerous. They can be fatal to animals; destroying habitats, or posing a risk of ingestion, entanglement of entrapment as they return back to Earth.

‘Every single local authority in Wales has already banned sky lanterns from being released on their land – highlighting just how dangerous these devices are considered to be.

‘As people across Wales pay tribute to key workers amid this time of crisis, we urge them to show support and gratitude through other means – such as clapping from their door-steps, placing decorated signs in their windows and donating whatever they can to worthy causes.

‘And, of course, staying safely at home where possible.’