THIS year’s Crufts finale descended into chaos when an animal right protestor stormed the arena, claiming it promoted ‘canine eugenics’.

And now campaign group Peta have taken their opposition to dog shows a step further – claiming it is ‘anti-feminist’.

A blog post on the website of Peta’s American branch said dog owners can’t be feminist because ‘if you buy a dog, you are funding sexual exploitation.’

The post, entitled ‘You can’t be a feminist and buy a dog’, noted the use of ‘bitch’ as an insult.

Joel Cessio, 32, from Nice, France stormed the stage as Yvettte Short picks up her winning dog, Tease, and runs off 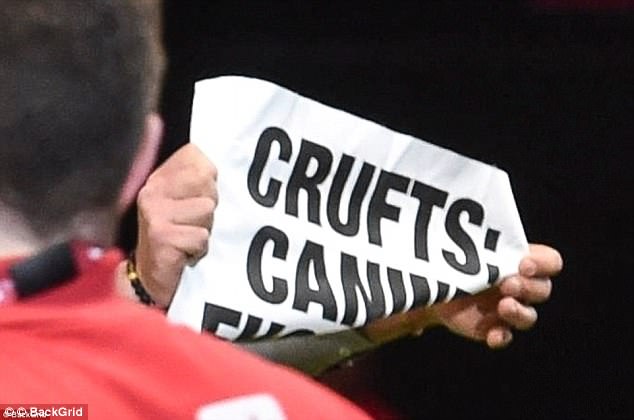 It said: ‘Apparently, it’s supposed to be an insult. Perhaps that’s because, in breeders’ circles, female dogs’ main purposes are to win beauty pageants and then to be bred repeatedly until their bodies wear out.

‘In puppy mills and breeding operations, female dogs are trapped in a nightmare sickeningly similar to the illicit sex trade. Their bodies are controlled, manipulated, bought, and sold – all for the financial benefit of their peddlers.’

The post then appeared to make a comparison between puppy mills and prostitution, stating : ‘Unfortunately, just like selling women, selling puppies can be profitable. 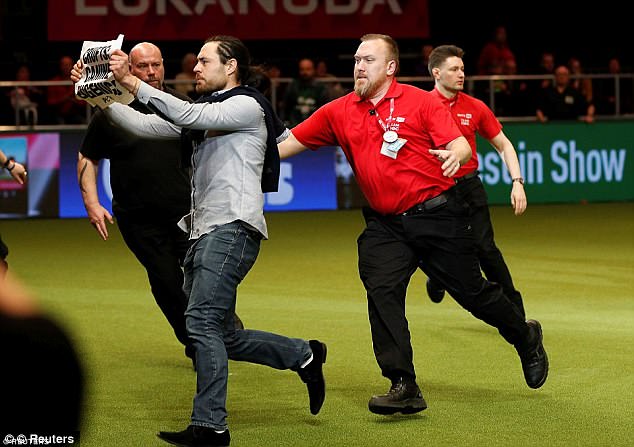 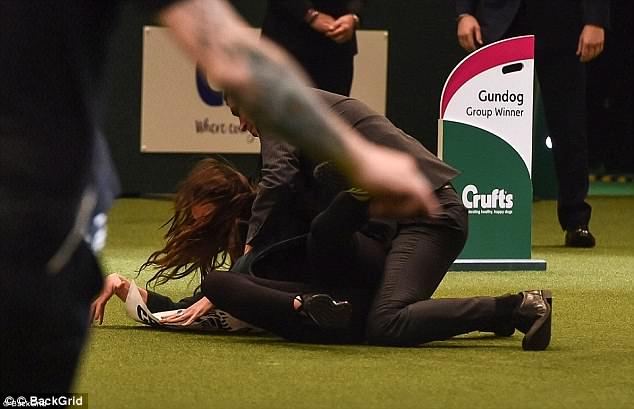 ‘Almost all the cute, wriggling ones in pet store windows or sold online for hundreds or even thousands of dollars came from an abusive hellhole like the one in North Carolina, even though customers are often given a shamelessly dishonest sales pitch about “carefully chosen facilities.”

Asked whether it was attacking dog shows as misogynist, a spokeswoman for Peta UK told The Times: ‘Any institution that treats females as breeding machines is anti-feminist. Not only are dog shows such as Crufts creepy, they also encourage people to breed dogs purely for their physical appearance, commonly at the expense of their health.’

A spokeswoman for the Kennel Club, which runs Crufts, said there tended to be a gender balance between male and female dogs on show.

In a tweet, dog lovers Lucie Jayne Betts criticised the post: ‘I didn’t buy mine, I rescued him, so according to Peta, I apparently get to keep my feminist card. Though besides, there’s a HUGE difference between reputable breeding and puppy farms. Likening dog breeding to human sexual exploitation is absurd. Utter drivel.’

Caroline Kisko, secretary of the Kennel Club, said: ‘All breeders, from individuals who only ever breed one litter through to large-scale breeding establishments, should be adhering to the Animal Welfare Act and prioritising the health and wellbeing of dogs above all else. It is crucial for anyone considering getting a dog to do their research and go to a responsible breeder or a rescue organisation to avoid unknowingly supporting the puppy farming trade.’

Earlier this month, the Crufts Best in Show award ceremony was marred by a protestor who ran across the floor before he was tackled by security. 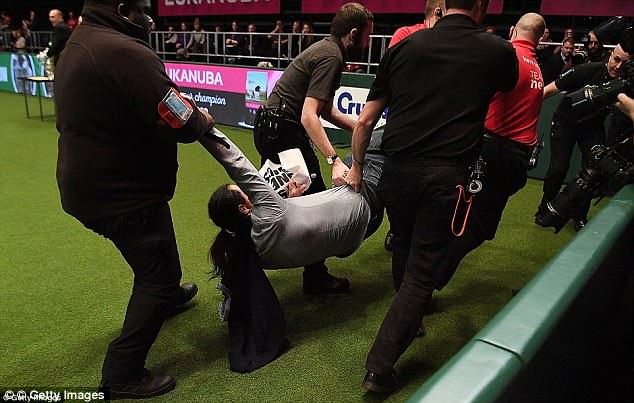 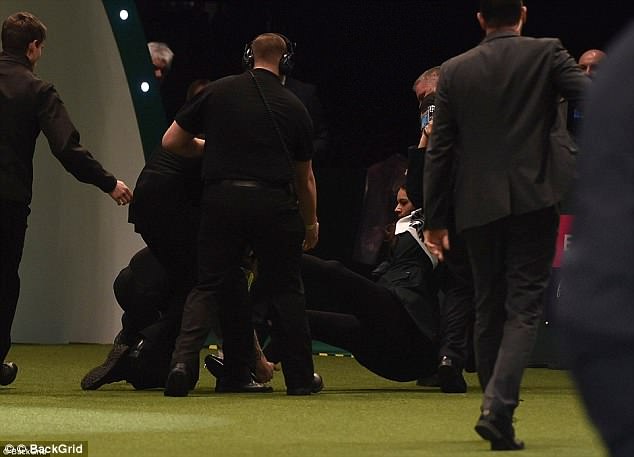 A blog post on the website of Peta’s American branch said dog owners can’t be feminist because ‘if you buy a dog, you are funding sexual exploitation’

The activist waved a poster that said: ‘Crufts: canine eugenics.’ As the demonstrator ran towards her, winning whipped Tease’s owner Yvette Short, of Edinburgh, picked up her dog and went to safety.

The crowd at the Birmingham NEC, which has seen an estimated 160,000 visitors across four days, then booed the protester as he was taken away.

Peta, the campaign group that calls for the ethical treatment of animals, claimed responsibility for the stunt, which was shown live on Channel 4. Peta’s director Elisa Allen said: ‘Crufts glorifies pedigree fetishists’ twisted pursuit of the “perfect” dog.

‘There’s nothing natural about breeding dogs with extreme and debilitating physical traits, and Peta urges everyone to stay away from this cruel beauty pageant.’ Crufts said: ‘It appears that protesters from Peta gained unauthorised access. In doing so they scared the dogs and put the safety of people and dogs at risk in a highly irresponsible way.’ ends