Her 1991 testimony against Clarence Thomas riveted the nation, but failed to derail his nomination to the Supreme Court. Now, 27 years later, Anita Hill says the Brett Kavanaugh confirmation hearing – with no FBI investigation and no witness testimony – is destined to be unfair, just as she and many others felt the Thomas hearing was.

Still, she says, whatever happens, don’t look at the Kavanaugh case as a referendum on the #MeToo movement, or a barometer of its success. #MeToo is much bigger than that – and the ship has sailed.

‘A lot is different now,’ Hill, 62, says of the year since the movement was launched, following scandalous revelations about producer Harvey Weinstein.

‘A number of powerful men have been held accountable. I don’t think any one episode is going to define a whole movement.’

Besides, she told The Associated Press in a telephone interview Tuesday night, ‘Remember, #MeToo is about raising awareness. Just because the Senate’s awareness hasn’t been raised, doesn’t mean that the rest of us haven’t evolved and learned.’

Moment of history: Anita Hill’s questioning by the Senate Judiciary Committee over the sexual harassment allegations she made against Clarence Thomas has been widely compared to the impending hearing of Christine Blasey Ford’s allegations against Brett Kavanaugh 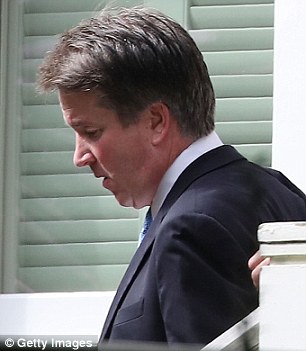 In the years since she sat in that bright turquoise suit, in front of an estimated 20 million TV viewers, and calmly and deliberately recounted her allegations of workplace harassment against Thomas, Hill has been somewhat of a reluctant heroine to many women, living a quiet academic life at Brandeis University for two decades now.

The Kavanaugh hearing, in which Christine Blasey Ford will detail her allegation of a sexual assault from when she and the judge were teenagers – a charge he denies – has trained the spotlight on Hill again, as people recall her 1991 ordeal and discuss similarities.

Hill herself will be nowhere near Washington when Thursday’s hearing takes place. She’ll be in Salt Lake City, where she was giving a lecture Wednesday evening at the University of Utah.

Asked what advice she might give Ford, Hill is typically measured in response.

‘Our circumstances are very different,’ she says. ‘And I try not to give blanket advice because these situations are just so personal.

‘I don’t know her, I don’t know her state of mind, the entirety of her story. It’s unprofessional as a lawyer but insensitive as a human being, to mete out personal advice to someone you don’t know.’

One thing Hill does know, she says, is that the session will be stacked against Ford.

‘It’s hard for me to imagine it can be fair,’ she says, criticizing the lack of an FBI investigation and allow witnesses to testify (only Kavanaugh and Ford will testify).

‘Sexual assault does not happen in a vacuum,’ Hill says. ‘There is a context.’ Ford contends a drunken Kavanaugh groped her and tried to take off her clothes at a party when he was 17 and she was 15. Ford says Kavanaugh put his hand over her mouth when she tried to scream.

A full investigation would provide context, says Hill, such as the culture of high school drinking that Kavanaugh may have been part of. 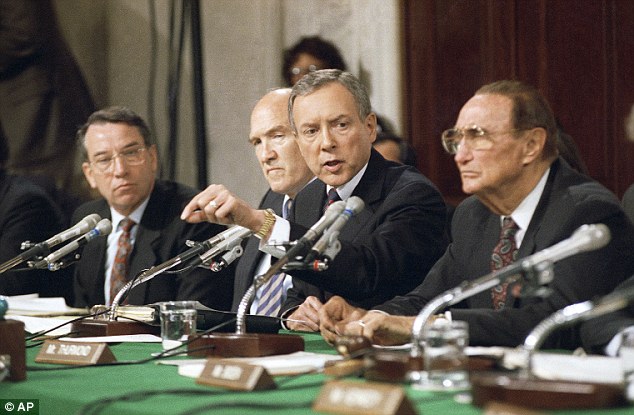 Flashback moment: Orrin hatch was on the Senate judiciary committee in 1991 and is still on it now; he questioned Anita Hill but a sex crimes prosecutor will question Christine Blasey Ford

‘The reason I think it’s not going to be fair is that it doesn’t give you all the information,’ she says.

‘And I believe it is designed to pit his word against hers, and we know that (he) has all of the power of the presidency behind him. And she doesn’t.’

It’s not lost on Hill, and many others, that the current Judiciary Committee shares some optics with the committee that questioned her.

In 1991 it was composed of 14 white men; there were only two women in the entire Senate. Now the committee’s 11 Republicans are all men. Of 10 Democrats, four are women.

The composition of the committee ‘doesn’t surprise me because the Senate is dominated by men,’ Hill says.

‘There are women on the committee, and that’s new, but the overwhelming vision of the Senate Judiciary committee is still largely white and male.

‘We know that even a few women can change the conversation, so we have to keep pushing to make sure that representation IS truly representative.’

Part of Hill’s work today is as head of a commission in Hollywood aimed at targeting sexual abuse and harassment in media and entertainment.

‘It’s not a short term project,’ she says. ‘It will take time because we are looking at an entire industry and it’s an industry made up of different components.’ But, she says, ‘I’ll tell you that a new level of awareness has come in the last year or so.’

Hill has plans that go beyond her #MeToo-related work and her teaching. She is finally starting in earnest this year, she says, a longtime project to sort through thousands of letters of support from 1991 and 1992. Many writers gave descriptions of their harassment or abuse.

‘It’s going to be interesting to see whether or not peoples’ experiences have changed in the past 20-something years,’ she says.

Here’s something that hasn’t changed: that famous suit. Hill never put it on again, and resolved to one day let it go and give it to the Smithsonian.

‘No update,’ Hill says with a sigh. ‘It’s still in a garment bag. But yes, it will leave my possession at some point. I haven’t quite figured out when.’