By day, Vogue editor-in-chief Anna Wintour runs the biggest fashion magazine in the world. And by night, she is the US Open’s biggest cheerleader.

The tennis superfan was on hand for Day 3 of the Open this week, her third day in a row attending matches in Queens, New York.

For her third appearance, the 68-year-old arbiter of style sat in the stands with friends, cracking a smile as she watched Serena Williams bested Carina Witthoeft at the USTA Billie Jean King National Tennis Center.

Ready to roll! Anna Wintour was on hand for Day 3 of the Open this week, her third day in a row attending matches in Queens, New York 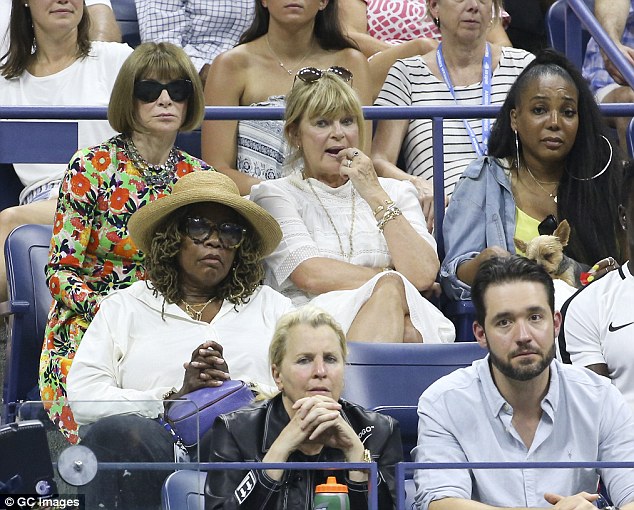 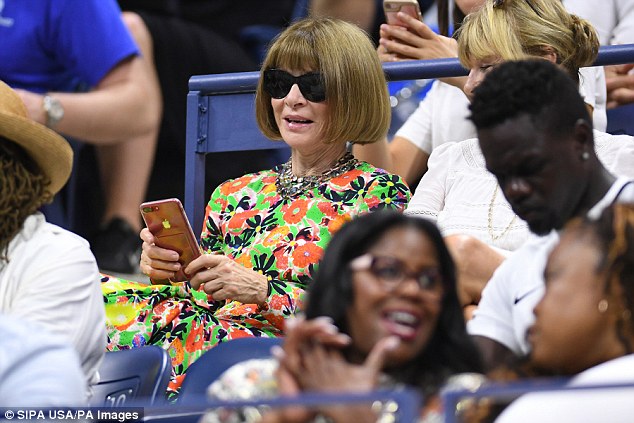 Special: The 68-year-old was in Serena’s own box for her match against Carina Witthoeft 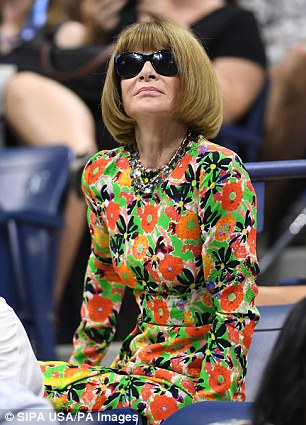 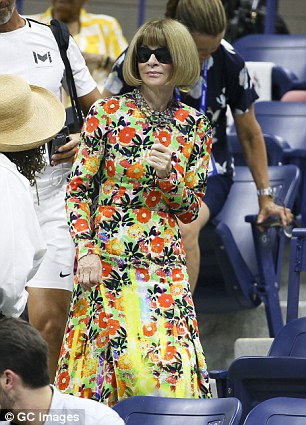 Style: She wore sunglasses throughout the game, in addition to her floral dress and beaded necklace

Wintour was all smiles when she arrived for the match in a shin-length floral dress — which, shockingly, had long sleeves despite high temperatures of 92°F in New York on Wednesday.

She paired the sunny poppy-print number with her go-to nude Manolo Blahnik sandals — which are custom-made for her by the man himself, naturally — and one of her signature  multicolor beaded necklaces.

The Vogue boss also carried a floral bag and, of course, topped the whole look off with dark sunglasses.

She sat in Serena’s box to watch her play, sitting beside Vanity Fair contributor Anne McNally.

According to eyewitnesses, she seemed pleased as she watched Serena win, though the fashion editor didn’t remark publicly on the athlete’s choice of a purple tutu for the game. 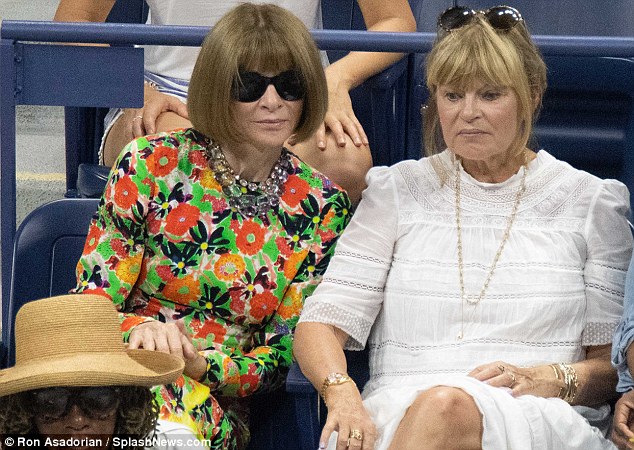 Woohoo! She seemed pleased that Serena, one of her favorite players, won 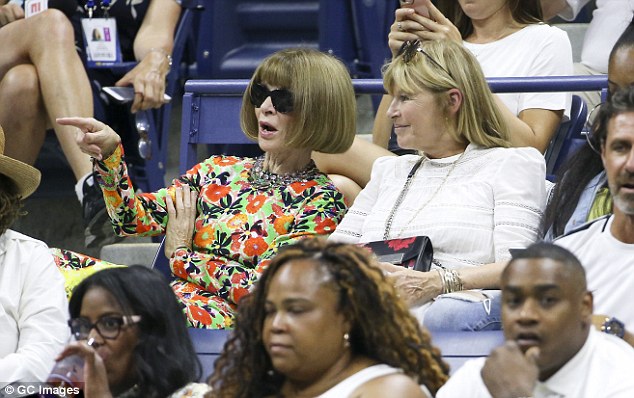 Hot! Her dress had long sleeves despite high temperatures of 92°F in New York 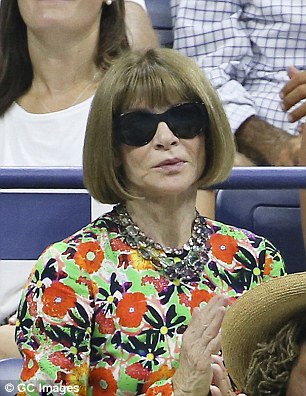 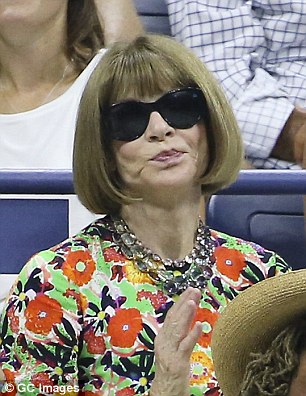 Streak: This was Wintour’s third day in a row at the US Open 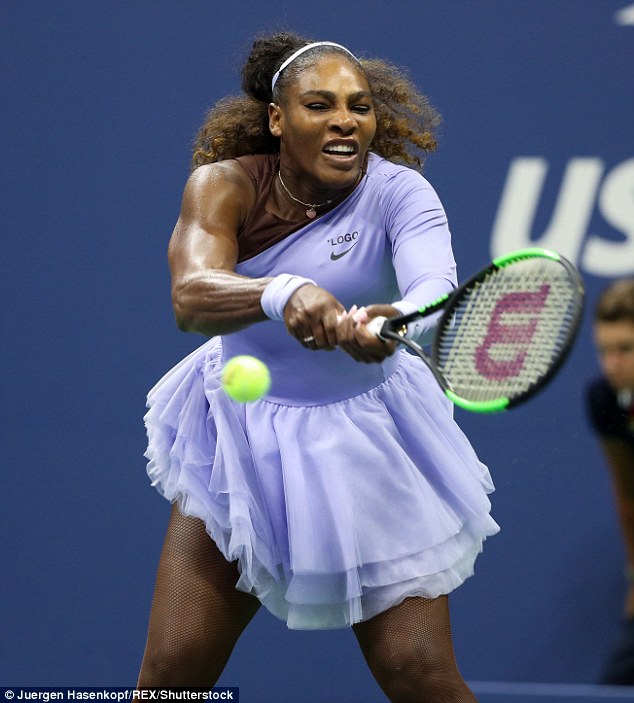 Awesome! She watched Serena play in her purple tutu and win the match

The previous evening, Tuesday, Wintour smiled in the stands for Roger Federer’s match against Yoshihito Nishioka.

Ever the VIP, she sat in Federer’s box at Arthur Ashe stadium as well, just behind his wife, Mirka.

Wintour wore a black, white, and purple dress that night, teamed with Manolos, a beaded necklace, and sunglasses, as well as a small woven clutch.

This week, Federer told press that he often asks Wintour for fashion advice, and got her opinion before signing his new sponsorship deal with UNIQLO.

‘Sometimes she likes to know what I’m going to wear. She asked me what I was wearing to the US Open and I would show her and she has her comments and sometimes when I have choices, I’ll show her. 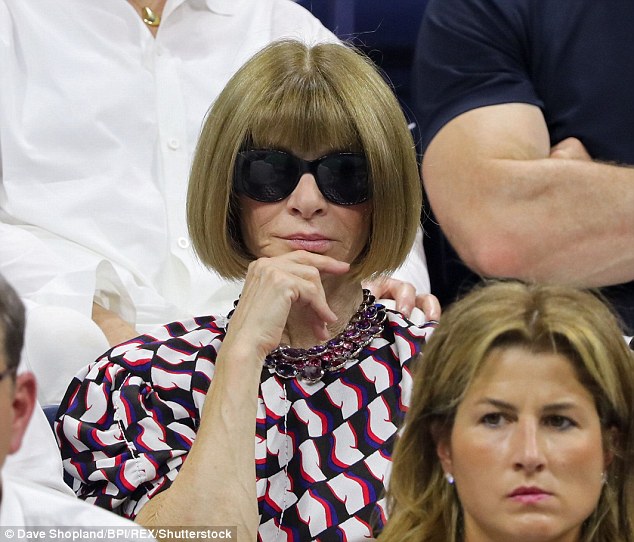 Making the trek: On Tuesday, Wintour also attended the US Open in Queens 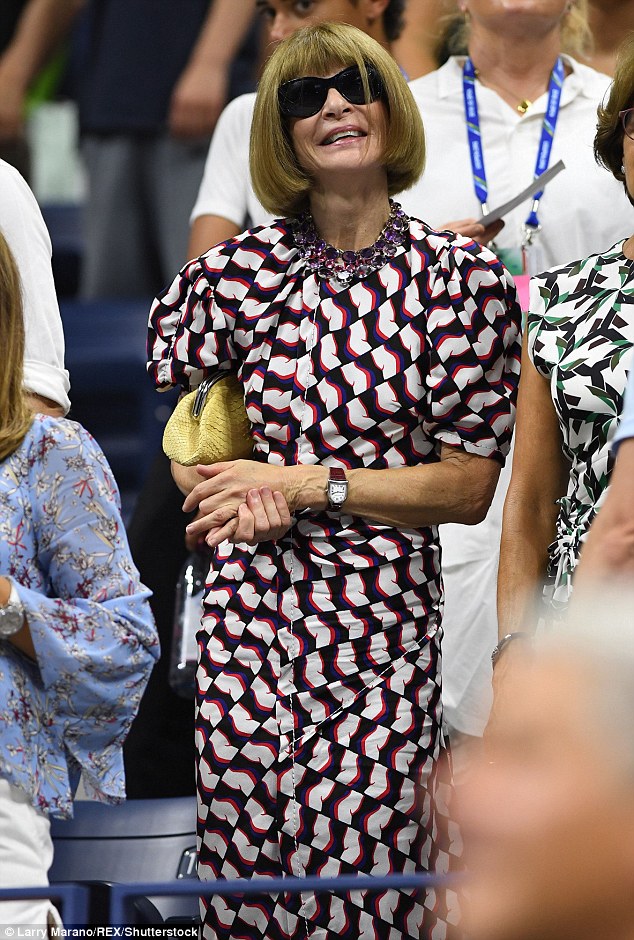 The look: She wore a printed number and one of her go-to beaded necklaces and sat in Roger Federer’s box to watch him play, alongside his wife Mirka 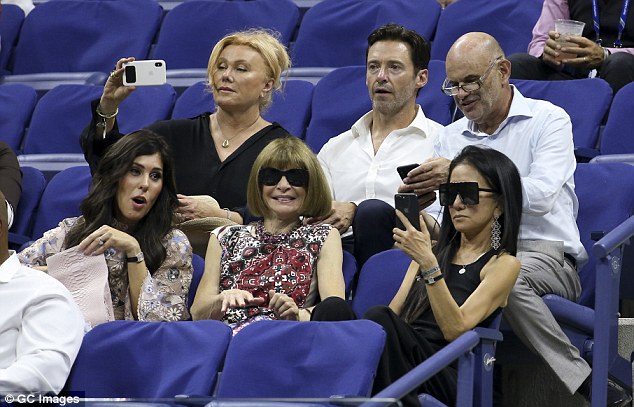 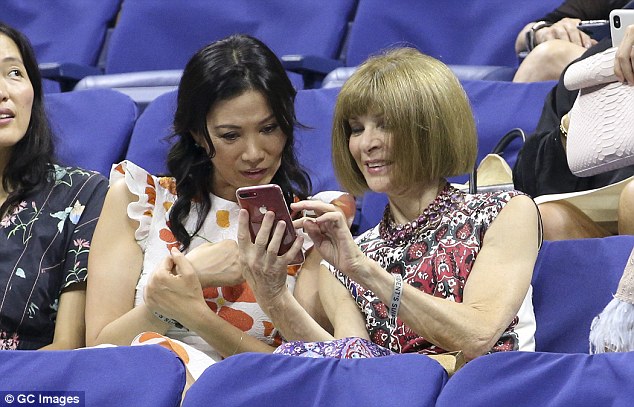 In the stands: Wendy Deng was also in attendance, and sat alongside the editrix 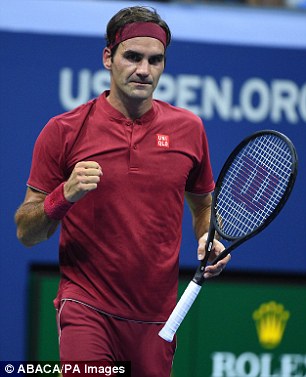 And back on the first night of the Open, on Monday, Wintour turned up for the occasion as well.

She sat with friend Wendy Murdoch, and spent time chatting with Gayle King, Hugh Jackman (her favorite action star of all time, according to her 73 Questions interview), and Hugh’s wife Deborra-lee Furness.

She wore a similar printed dress, beaded necklace, and heels, and was seen laughing with her companions in the stands.

A tennis player herself — she regularly gets up early to play before work — Wintour also frequently pops up at other tournaments.