Tennis fanatic Anna Wintour made a stunning appearance to day five of Wimbledon match where she was pictured with a beaming smile in the Royal box.

The Vogue-editor-in-chief, 72, is known for her courtside appearances -especially if her good friends Serena Williams and Roger Federer are playing.

Wintour was photographed wearing an all-white outfit which was anything but ordinary and a radiant smile as she sat courtside in the Royal Box.

The Vogue boss stepped out in a long dress patterned with trees and a floor-length embroidered coat and her staple dark shades.

Anna Wintour, 72, made a stunning appearance at the Wimbledon day five match 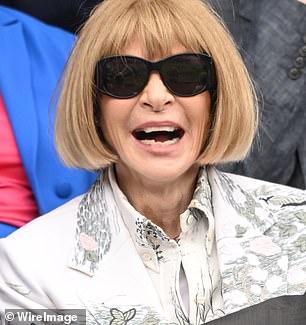 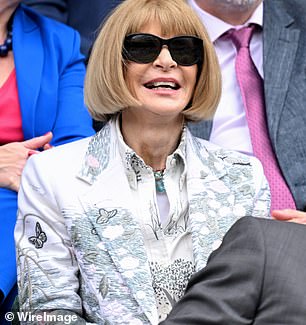 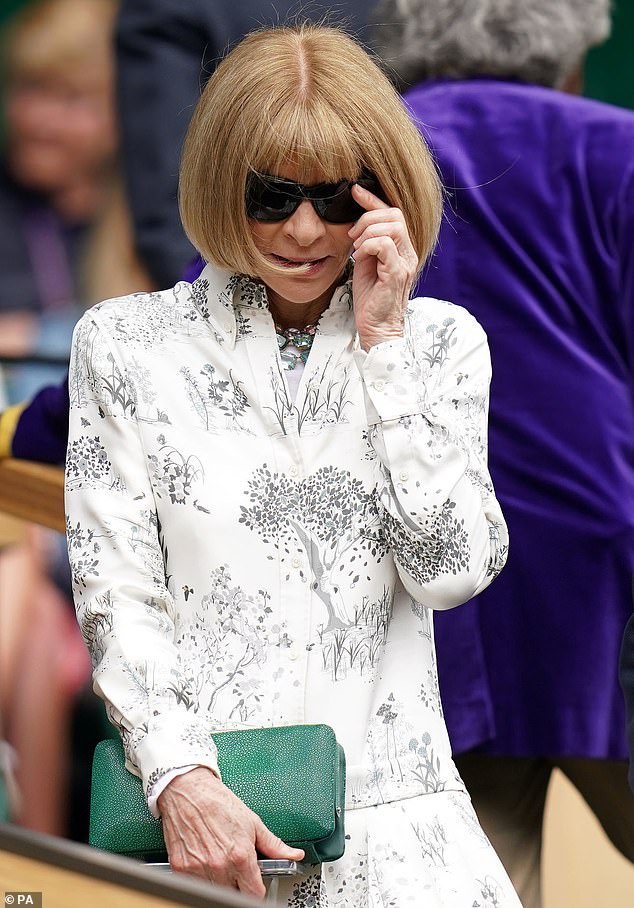 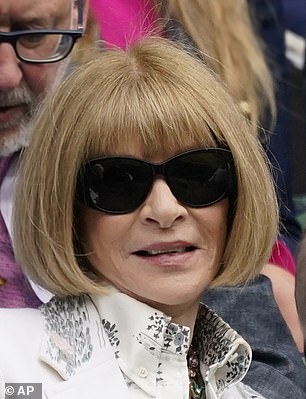 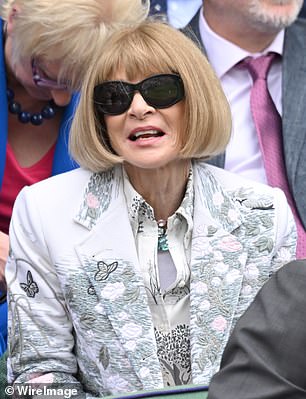 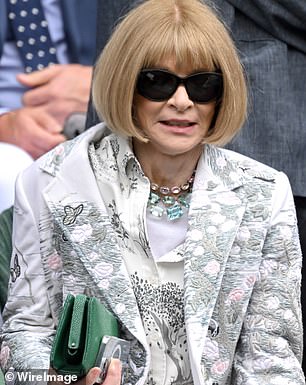 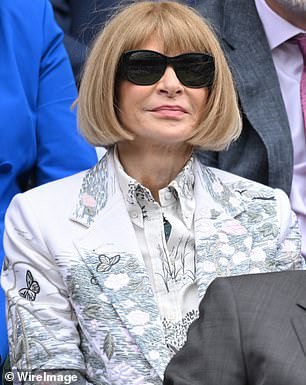 She added a touch of color to her outfit by pairing it with a green clutch purse and turquoise jeweled necklace.

And while the 72-year-old’s friend Roger Federer was missing due to injuries, Wintour still showed her support.

As always she had prime seats for the event and cheered alongside Katherine Jenkins, Sir Cliff Richard, Andrew Lloyd Webber, Princess Michael of Kent and Lady Marina of Windsor.

Although Djokovic beat Wintour’s longtime friend Federer in the 2020 match, the fashion industry’s most powerful editor still showed her support for Djokovic, whom she is said to have built a close friendship with in the past few years. 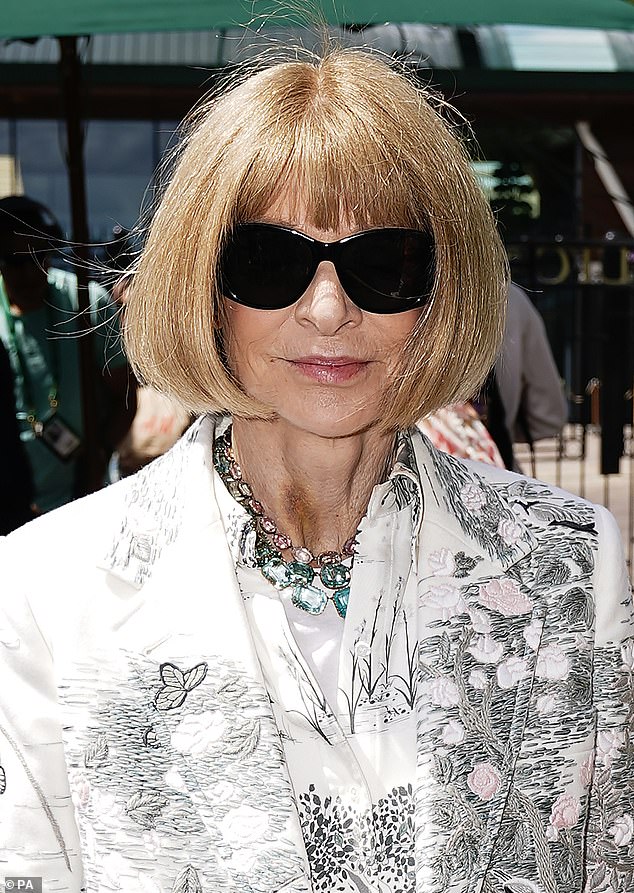 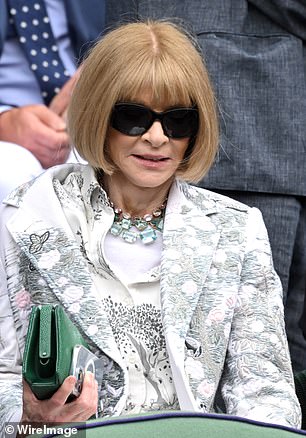 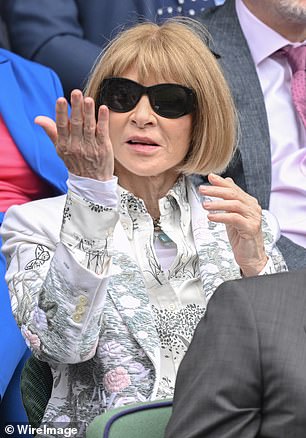 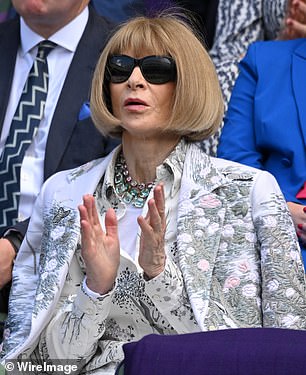 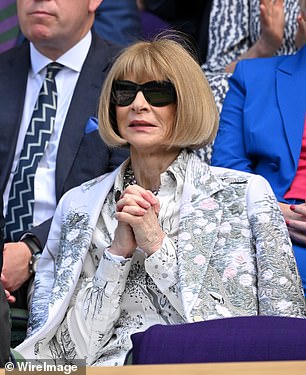 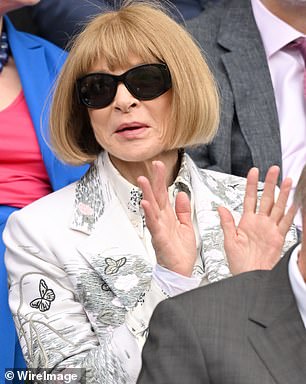 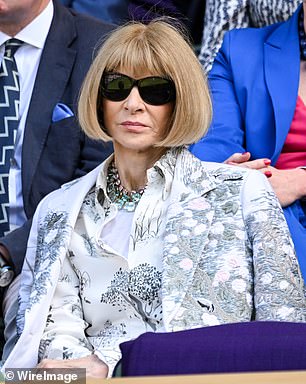 Wintour appeared in high spirits at what is believed to be her first match of the Wimbledon tournament.

As always she had prime seats for the event and cheered alongside stars Katherine Jenkins, Sir Cliff Richard, Andrew Lloyd Webber, Princess Michael of Kent and Lady Marina of Windsor as they all sat in the Royal Box.

Just days before Wintour made her star stunning appearance, her close friend Serena Williams faced Harmony Tan, who is currently ranked 113 in the world.

The 23-time Grand Slam title winner described her loss as ‘insane’ and intense.’

In a 2014 73 Questions video for Vogue, Wintour said her dream partner’s would be Williams and Federer

‘That was insane and intense. Not the result I came for, but my goodness I enjoyed that. I hope you did as well. Onward and up,’ she wrote in the caption of her Instagram post following her defeat.

The match marked nearly a year since the seven-time Wimbledon champion sustained an injury and was forced to withdraw as she left the court in tears.

Despite the loss, Wintour was all smiles as she cheered courtside.

The Vogue editor was last seen at the 2021 US Open and is known to attend almost all major matches.

Wintour is a tennis player herself and regularly wakes up early to play before she heads to work.

The editor has made it tradition to show up for both Williams and Federer and has seen them play at major tournaments including the US Open and Australian Open.