Annabella Sciorra, the actress who is one of several women to accuse Harvey Weinstein of rape, says she derived ‘no relief’ from seeing the former Hollywood titan being led away in handcuffs on Friday.

‘The law finally caught up with Harvey Weinstein on Friday and charged him with multiple counts of rape and sexual assault,’ the star of the 1991 film Jungle Fever tweeted on Sunday.

‘But nothing about that felt celebratory to me.

‘The smirk on his face as he was led out of the police station in cuffs made me physically sick.

‘The public statement from his lawyer was intended only to denigrate all the brave women who came forward and spoke out against him.

Annabella Sciorra, the actress who is one of several women to accuse Harvey Weinstein of rape, says she derived ‘no relief’ from seeing the former Hollywood titan being led away in handcuffs on Friday. Sciorra is seen above in March 2018 at an event in Beverly Hills 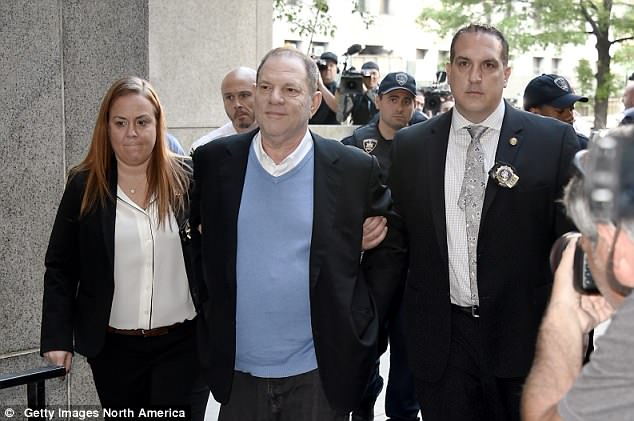 ‘The law finally caught up with Harvey Weinstein (above) on Friday and charged him with multiple counts of rape and sexual assault,’ the star of the 1991 film Jungle Fever tweeted on Sunday. ‘But nothing about that felt celebratory to me’

‘And I got no relief from seeing this monster walk into court, then sneak out the back door after posting a million dollar bond.

‘All that says is, money buys VIP treatment in the justice system no matter how serious or violent the crimes.’

A handcuffed Weinstein appeared in a Manhattan court to face charges of rape and other sex crimes against two of the scores of women who have accused him of misconduct, ending his reign as a Hollywood kingpin.

Sciorra tweeted that Weinstein should have received the same treatment as Kalief Browder.

In 2010, Browder, an African American teen from The Bronx, was arrested and sent to Rikers Island jail at age 16 for allegedly stealing a backpack.

He was held for three years in jail without trial – two of those years in solitary confinement. Shortly after his release, he committed suicide.

Browder maintained his innocence. He was never tried or found guilty of any crime.

The Browder case has been cited by advocates of criminal justice reform since the boy was never able to afford the $3,000 bail, thus resulting in his extended stay at Rikers before he stood trial. 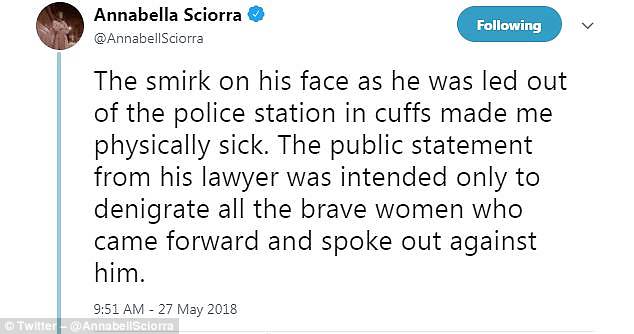 Weinstein, by contrast, was able to walk out of jail after posting $1million cash bail.

He is now allowed to go between New York and Connecticut but must wear an electronic ankle monitoring bracelet.

‘If there was truly “equal justice under the law,” Harvey Weinstein would be behind bars in Rikers today, waiting for his own day in court, not free to roam New York, his other hunting ground, wearing an ankle bracelet,’ Sciorra tweeted.

Sciorra, best known for her roles in the hit film The Hand That Rocks the Cradle and the TV series The Sopranos, said that Weinstein violently raped her in the 1990s, and then sexually harassed her over the next several years.

Sciorra was a rising star thanks to her leading role in The Hand that Rocks the Cradle when she met Weinstein at a party; she said that he was polite and gave her a lift home, according to The New Yorker.

Later, she pitched a screenplay written by a friend – a comedy called The Night We Never Met – to him, and he said he wanted to produce it with her in the lead.

But when she said she didn’t want to record the film directly after another two back-to-back shoots, Weinstein threatened to sue her.

His representatives denied that claim.

Later, after a Miramax party, she said Weinstein offered her a lift home – but this time he didn’t leave. After she had gone inside and undressed for bed, she heard a knock at her door.

‘It wasn’t that late,’ she said. ‘Like, it wasn’t the middle of the night, so I opened the door a crack to see who it was. And he pushed the door open.’ 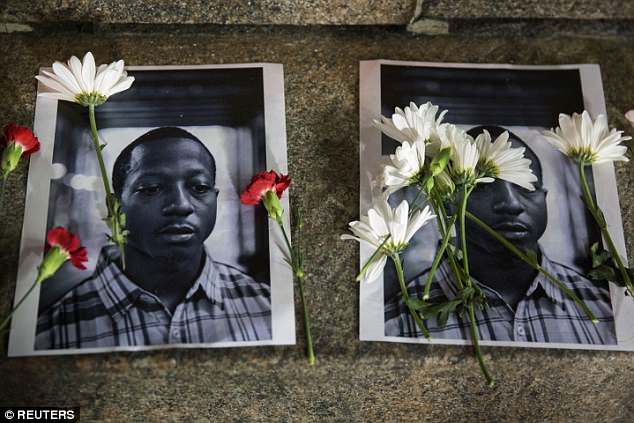 Browder (seen in the above stock photos) committed suicide in 2015 after he spent three years in the Rikers Island prison without being convicted of a crime. He was confined to prison because he wasn’t able to pay the $3,000 bail after he was accused of petty theft

She said he ‘walked in like it was his apartment, like he owned the place, and started unbuttoning his shirt. So it was very clear where he thought this was going to go.

HARVEY WEINSTEIN FACING UP TO 54 YEARS IN PRISON ON CHARGES

And I was in a nightgown. I didn’t have much on.’

Sciorra, dressed in just a nightgown watching him walk around the apartment, apparently looking to make sure no one else was in the home, she said.

She told him to get out. He approached her. Then, she said, he raped her.

‘He shoved me onto the bed, and he got on top of me,’ she said. ‘I kicked and I yelled,’ she added, but the bulky Weinstein was far stronger.

‘When he was done, he ejaculated on my leg, and on my nightgown. He said, ‘I have impeccable timing.” The nightgown was a family heirloom, she said.

He then attempted to perform oral sex on the weakened and frightened woman, who began to shake violently as she tried to fight him off; she believes her apparent ‘seizure’ was what scared him off.

Sciorra said she blamed herself for the attack for months after.

‘Like most of these women, I was so ashamed of what happened,’ she said. ‘And I fought. I fought.

‘But still I was like, ‘Why did I open that door? Who opens the door at that time of night?’ I was definitely embarrassed by it. I felt disgusting. I felt like I had f**ked up.’

Meanwhile her career – which had been riding high up to that point – faltered.

She didn’t work from 1992 to 1995, being told that people had heard she was ‘difficult’ – something she attributes to ‘the Harvey machine’.

Finally, she said, she found work again – and Weinstein found her.

While in London filming The Innocent Sleep in 1995, she said, she began to get answerphone messages from Weinstein, then cars pulling up telling her to get inside, and ultimately Weinstein himself pounding on her hotel door.

‘For nights after, I couldn’t sleep. I piled furniture in front of the door, like in the movies,’ she recalled.

Eventually she asked Matthew Vaughan – then a young producer, now known as the director of the Kingsman movies – to help move her elsewhere. Vaughan said he recalled booking her another room.

In 1997, she signed up to Sylvester Stallone movie Cop Land; she said she didn’t realize it was a Miramax film; Weinstein’s reps said the company’s name was on the script.

Regardless, she said, when she checked in to the Hotel du Cap-Eden-Roc, in Antibes, France, for the Cannes Film Festival, she discovered her room was next to his. 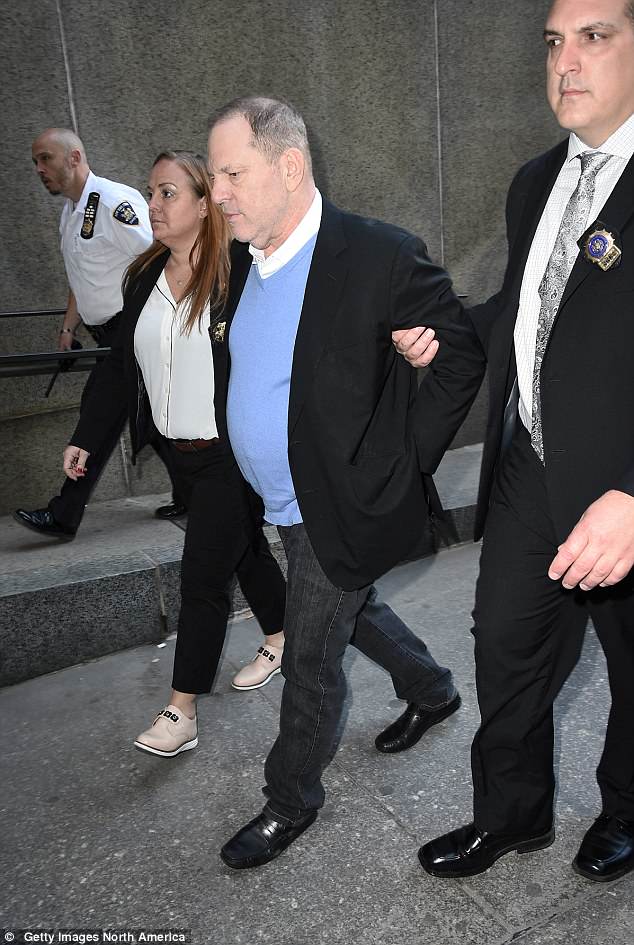 Last year, Sciorra came forward and accused Weinstein of raping her. She believes her spurning of his advances ended up costing her career opportunities

Early one morning, she said, she was awoken by a knock at her door, and opened it to see ‘Harvey in his underwear, holding a bottle of baby oil in one hand and a tape, a movie, in the other.’

He pursued the still-groggy woman into the room while she frantically dialed room and valet service – and only left when staff arrived, she said.

When she opened up to a friend who told her to call police, she replied: ‘I can’t go to the police. He’s destroying my career.’