Annastacia Palaszczuk has wished her arch-rival Gladys Berejiklian well – and set the record straight about their famously frosty relationship.

‘I wish Gladys Berejiklian the best for the future,’ the Queensland Premier said in a statement.

‘Contrary to some public commentary, I have always respected Gladys and found her to be good company’.

Ms Palaszczuk went on to say Ms Berejiklian’s ascension to the top job in 2017 was a ‘significant achievement for women everywhere.’

Ms Berejiklian resigned after NSW corruption watchdog announced it was investigating her about her secret relationship with disgraced MP Daryl Maguire.

The watchdog known as ICAC is investigating whether Ms Berejiklian encouraged or allowed corrupt conduct by her ex-boyfriend and former Wagga Wagga MP Mr Maguire between 2012 and 2018.

It will also probe whether she breached public trust by not reporting any suspicion of corrupt conduct.

The frosty relationship between Ms Palaszczuk and Ms Berejiklian was laid bare when a series of icy text messages were released in June.

The conversations were released under a Right To Information request and appear to show the breakdown in civil communication between the two leaders.

What started out as warm and friendly texts between the pair in January 2020 after the devastating bushfires have since descended into single-word ‘thx’ responses.

The two leaders have been at loggerheads over the response to Covid since the first the pandemic started, with a series of border closures between NSW and Queensland causing havoc for residents of both states. 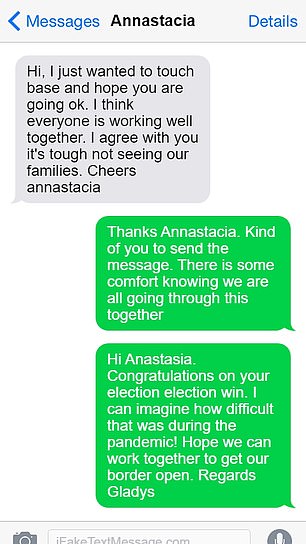 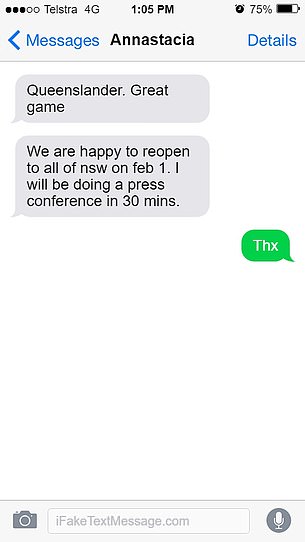 Text messages between state premiers Gladys Berejiklian and Annastacia Palaszczuk started out warmly , as seen in this exchange from April 2020 (left). But tensions over the border closures between New South Wales and Queensland saw communications break down in increasingly terse texts, like this exchange, pictured on the right, on November 5, 2020

Ms Berejiklian has been vocal in her frustration at Queensland repeatedly shutting out its southern neighbour – but Ms Palaszczuk has been equally resolute in defending her cautious approach.

The text messages – some of which were censored before release because they contained personal or irrelevant information – reveal Ms Berejikian repeatedly mis-spelled Ms Palaszczuk’s first name, using only one N instead of two, and two Ss.

The pair exchanged 20 messages between January 2020 and March 18 2021, with nine of them redacted, according to the Daily Telegraph.

They start on January 3 2020, when Ms Palaszczuk texted her NSW counterpart to offer help in the response to the bushfires hitting the NSW south coast.

‘Anything more we can do to help please let me know. Cheers annastacia’ she texted.

Ms Berejiklian replied: ‘Thanks Anastasia[sic]. Much appreciated. We are as well prepared for tomorrow as we can be. Victoria also I’m [sic] very bad shape. Take care and stay in touch.’

As the Covid crisis began to spread out across the world from Wuhan in China’s Hubei province, the pair swapped notes on January 31.

‘I have written to the PM about more info on arrivals from Hubei province FYI,’ texted Ms Palaszczuk ‘Hope you are going OK. Tough year for bushfires. Kind regards annastacia.’

Ms Berejiklian replied: ‘Thanks for letting me know Anastacia [sic]. We are hoping worst of season is behind us….’

When the nation went into lockdown mode in March, and Australia began holding national cabinet meetings with all the state leaders, Ms Palaszczuk again reached out to Ms Berejiklian as the pair shared their concerns over the impact of the pandemic.

‘Hi, I just wanted to touch base and hope you are going ok. I think everyone is working well together. I agree with you it’s tough not seeing our families. Cheers annastacia,’ she wrote on April 7, 2020. 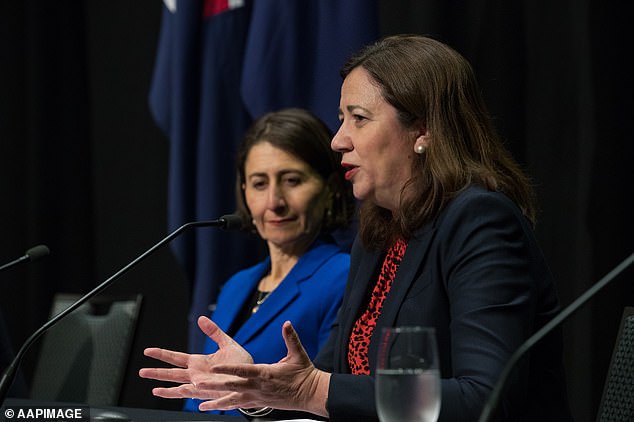 The NSW premier replied, spelling her name correctly for the one and only time during the exchanges: ‘Thanks Annastacia. Kind of you to send the message. There is some comfort in knowing we are all going through this together.’

Over the winter though, the tensions began to show. As NSW dealt with localised cluster outbreaks without going into lockdown, Queensland responded by closing its border to NSW residents.

Ms Berejiklian snapped in one text: ‘All I have had are questions from the media about statements you and you colleagues have made on the border.’

And on September 22, 2020, Ms Berejiklian sent another terse message: ‘Hi Anastasia [sic] [redacted] My health Minister has already been in touch with yours. Thanks again.’

The NSW premier was warmer in November though after Ms Palaszczuk was returned to power in the Queensland state elections – but the border closures still rankled.

‘Hi Anastasia [sic]’ she wrote on November 1. ‘Congratulations on your election election [sic] win. I can imagine how difficult that was during a pandemic! Hope we can work together to get our border open, Regards Gladys.’

But she was ghosted by her counterpart and the message got no response until four days later after Queensland snatched the NRL State of Origin opener 18-14 at Adelaide Oval.

The NSW Premier fumed to the press at the time: ‘She didn’t mention borders or thanks for the congratulations. I didn’t know whether to be shocked or bemused frankly.’

It would be three months of bitter battle between the two states before the border would re-open, with the NSW Premier given just 30 minutes notice of the decision.

‘We are happy to reopen to all of nsw [sic] on feb1 [sic]. I will be doing a press conference in 30 mins,’ the Queensland Premier texted on January 28.

The NSW premier had a one word response: ‘Thx’.

Despite the chilly texts, Ms Palaszczuk insists the pair are still friendly in real-life.

‘Everyone tries to portray it as some sort of fight and it’s simply not. It is simply not. I think it is over-reporting, we get on incredibly well behind the scenes.’

On Tuesday, her office told Daily Mail Australia: ‘The Premier has a good working relationship with all Premiers. They are all focused on the serious COVID situation and keeping their states safe. 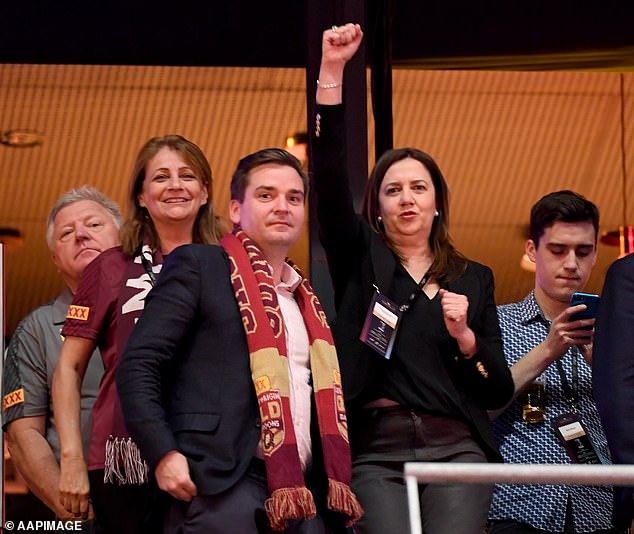 In a text to her NSW counterpart, Queensland premier Annastacia Palaszczuk (pictured) gloated simply in a message: ‘Queenslander. Great game’