Queensland Premier Annastacia Palaszczuk has put aside her differences with Sam Armytage to wish the Sunrise host ‘all the best’ in her post-morning television life.

Ms Palaszczuk was one of a handful of guests who gave Armytage an emotional goodbye as she finished her last day at Seven’s breakfast show on Thursday.

She also extended an invitation to Armytage to visit Queensland, in a slight dig at the outgoing Sunrise host who was fiercely critical of the Sunshine State’s border closures during the Covid pandemic.

‘I just wanted to wish you all the very best for your future. Congratulations on a great service to Australia,’ Ms Palaszczuk said in a recorded video message.

‘I wanted to let you know there is always a warm, friendly welcome here in Queensland for you on your next Queensland holiday.’

Queensland Premier Annastacia Palaszczuk (pictured main) wished Sam Armytage (inset) ‘all the very best’ for her post-morning television life, while also extending an invitation to the Sunrise host to visit the state after being critical of border closures

Armytage later revealed to her Sunrise colleagues how shocked she was to be invited by the premier to holiday in Queensland.

‘That was lovely of her to do that. And she’s invited me back to Queensland which I did not think would happen,’ she said.

Armytage regularly used Sunrise air-time to attack the premier for her draconian border closures during the Covid pandemic.

In September, Armytage blasted Ms Palaszczuk after claiming she refused to appear on Sunrise to front up to questions about her restrictions.

It came after a fire tore through Mungindi, a drought-stricken town on both sides of the Queensland and New South Wales border, wiping out its only supermarket and butcher.

But due to Ms Palaszczuk’s hard border closures, locals were forced to leave their border bubble to get essentials, or travel 160km to the nearest supermarket.

‘My blood is boiling because a lot of things she has done lately. You guys have now got no supermarket and no water and no food, basically,’ Armytage said. 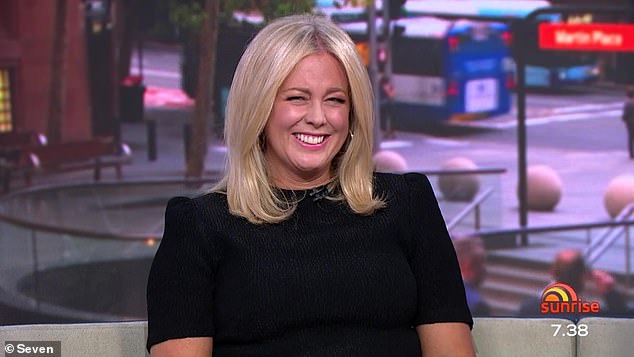 Armytage (pictured on Thursday during her last morning at the helm of Sunrise) thanked Ms Palaszczuk for her message, saying it was ‘lovely of her to do that’

‘She won’t come on the show. I am happy to have it out of there. I’m fed up of what’s going on in Queensland.’

The Sunrise host said she was ‘astounded’ by the Queensland border debacle, adding it was ‘beyond comprehension’ the woman was denied the chance to attend the funeral.

‘I was astounded and I watched the news last night and I saw Annastacia Palaszczuk play the bullying card,’ Armytage said.

Weeks later the pair clashed on air just before the Queensland election after Ms Palaszczuk finally agreed to an interview.

Armytage demanded to know what response Ms Palaszczuk had to ‘people who say you’ve been playing politics during a pandemic’.

The premier denied the claim, adding: ‘Sam, I did have to make some strong decisions about those borders and they were tough, they were tough on a lot of people’.

Armytage, 44, announced her resignation live on air on Monday, saying she wanted to step back from TV to spend more time with her family. 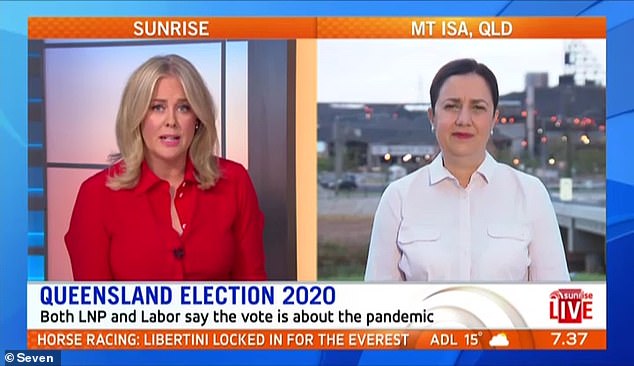 New South Wales premier Gladys Berejiklian was also among the well wishers, telling Armytage she was leaving the show at the top of her game.

‘To the lovely Sam, congratulations on a great innings at Sunrise. You’re leaving on your own terms at the top of your game and we couldn’t be happier for you. All the best for the future,’ she said.

‘You’ve brought something to the mornings that I think Australians who’ve been tuning in for so long have really appreciated,’ Mr Morrison said.

‘I appreciate now as you say, you’re editing your own story. And I know things have been pretty tough for you over the past 12 months and I’m sure you’re looking forward to a new period in you life after recently being married.

‘I want to thank you for the many times when you’ve grilled me… but also some of the lighter discussions we’ve had. I wanted to wish you all the best. God bless.’