Queensland has been urged to increase its vaccination rate as the premier and chief health officer warned entry of the Delta variant into the state was inevitable and would be uncontrollable.

Premier Annastacia Palaszczuk once again warned ‘Delta will come here’ once the nation’s borders are re-opened, as she announced no new community cases of transmission in the state on Wednesday.

‘We have walk-ins so there is no excuse,’ she said. ‘We need to get our vaccination rates as high as possible before we have those outbreaks here.’

Her comments were backed up by Chief Health Officer Dr Jeannette Young.

‘We will see Delta variant come in and it won’t be able to be controlled,’ Dr Young said.

‘The only control will be, the number of people who are vaccinated.’

‘We have walk-ins so there is no excuse,’ Queensland Premier Annastacia Palaszczuk said as she urged Queenslanders to lift vaccination rates. ‘We need to get our vaccination rates as high as possible before we have those outbreaks here.’ 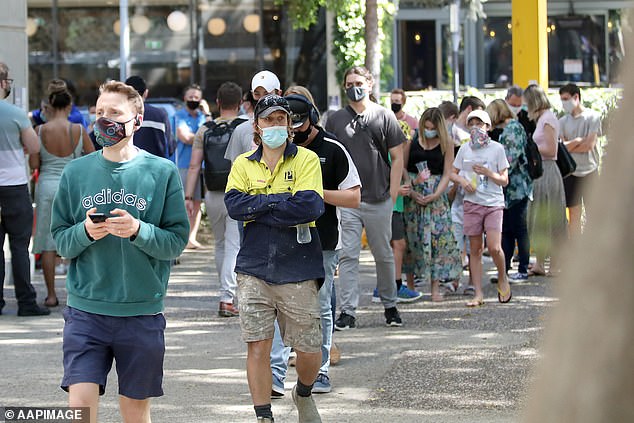 People line up at a mass vaccination hub at South Bank in Brisbane. Ms Palaszczuk said 67.76 per cent of Queenslanders had now received one dose of vaccine, while 48.89 per cent were now fully vaccinated

Ms Palaszczuk said 67.76 per cent of Queenslanders had now received one dose of vaccine, while 48.89 per cent were now fully vaccinated.

During a press conference at a vaccination hub at Ipswich, west of Brisbane, Ms Palaszczuk pinpointed people in Logan, Beaudesert, Ipswich and the Sunshine Coast as areas where vaccination rates needed to be lifted.

The state announced vaccination bookings could now be made via Queensland’s check-in app.

Ms Palaszczuk defended her government’s recent controversial comments in relation to Commonwealth funding of Queensland’s health system to ready it for an expected Delta outbreak.

‘This is what’s coming right across the country and that is why we are putting a lot of effort into preparing our hospitals and now is the time for greater co-operation between the Commonwealth and the states.

‘This is a concern not just shared by the [states] health ministers but also by the AMA.’

Ms Palaszczuk scolded one reporter for ‘mixing these messages up’ in regards to her government’s stance on Federal funding of the state’s hospital system.

‘These are pressures being experienced across the nation and with Delta, you add further pressures,’ she said.

‘That is why we are working very proactively with all our hospitals and health services.’

She cited statistics from NSW where people were waiting an hour for an ambulance as a result of the extra pressure brought on the system by the Delta variant. 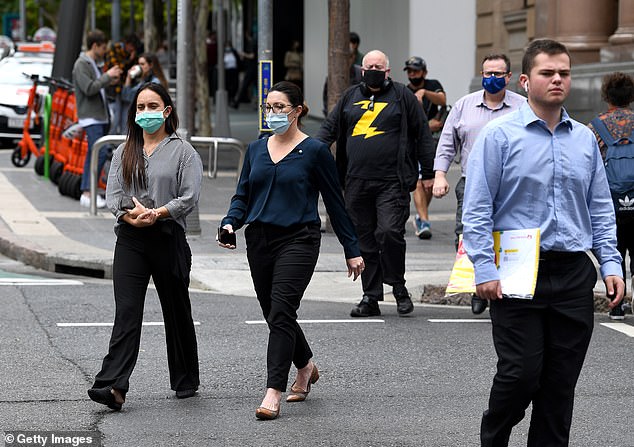 Queensland’s vaccination rates are at similar levels to Western Australia and Northern Territory among Australia’s states and territories. Pictured: People walking in the Brisbane CBD 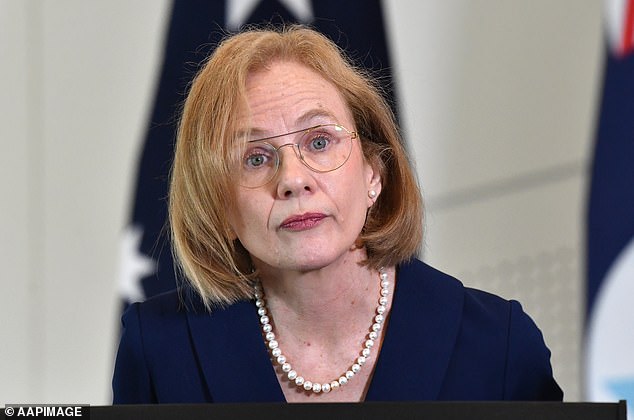 Chief Health Officer Dr Jeannette Young predicted the Delta variant will enter the state and won’t be controlled. ‘The only control will be, the number of people who are vaccinated,’ she said

Queensland’s vaccination rates are at similar levels to Western Australia and Northern Territory among Australia’s states and territories.

Ms Palaszczuk insisted that despite reports Queensland would not re-open at 80 per cent of the eligible population, the state continued to follow the national plan.

‘We’ve got a target of making sure we have 80 per cent double dose vaccinated but what I said yesterday, is that in the ACT they have 93 per cent [vaccination].

‘To protect Queenslanders I would like to see as many Queenslanders as possible vaccinated which would reduce our risks if and when we get those outbreaks.

Health Minister Yvette D’Ath said Queenslanders would learn to live with Covid but warned against a ‘pandemic of the unvaccinated’..

‘We don’t want communities that have lower rates [of vaccination] than the rest of the state and the country becoming infectious hotspots,’ she said.

‘When we talk about 80 per cent, well, if we have 90 per cent in some areas of Queensland and 60 per cent in other areas, what’s going to happen to those communities at 60 per cent?

‘They will get the virus running through their communities, we can’t risk that.’