ANNE ATKINS: Belief in the sanctity of life shouldn’t make you a target of hate

Which was exactly how I reacted. I am passionate about democracy and willingly embrace democratic decisions – even if, like Saturday’s result, they’re ones I might not have voted for myself.

And yet there was just the tiniest of niggles. A small part of me said, it’s not entirely democratic – is it? Not everybody gets a vote. Strictly speaking after all, there is a voice that’s been lost among all the rather distasteful triumphalism of the winning side, and one that for many it’s easier not to think about: the voice of the children who now will never be born.

My own opinions on abortion are not entirely black and white.

I remember, in my 20s, watching in horror the 1984 film The Silent Scream, which showed a termination in graphic detail. That a foetus is human, and living, seems to me undeniable. My Christian faith convinces me that we owe everyone, particularly the vulnerable, rights and protection in any civilised society. And yet in 2016, the last time statistics were taken, 185,824 abortions were carried out on women in England and Wales. Almost four in ten terminations are now carried out on women who have undergone the procedure before, while 50 women had each had eight terminations. That represents a lot of children who will never be born – with many more to be added when this law comes to pass.

But while I am pro-life, I have also experienced the visceral terror of a pregnancy I didn’t believe I could cope with: two of our three eldest have recognised disabilities, and when I was pregnant with our fifth, two scans suggested our child was likely to have Down’s syndrome. So I know what it’s like to be terrified of my own pregnancy, and I don’t believe I could ever condemn another woman for such a hard choice.

What is undeniable however is that in this debate, those who find themselves on the ‘wrong’ side can discover that their voices simply aren’t allowed to be heard – that they can be shouted down and their legitimate and compassionate concerns dismissed as women-hating, bigoted or uncaring.

The pro-choice arguments are always – initially, anyway – based on the (tiny minority) of hard cases: victims of rape or child abuse; those carrying foetuses that will never come to term.

We all know the other side of the story however; that abortion can be, for some, a lifestyle choice: nothing more than a contraceptive option.

Indeed, just last year the head of one of the UK’s biggest abortion organisations said abortion should be regarded as no more than another form of birth control. Termination of a pregnancy should not be seen as exceptional but merely as ‘birth control that women need when their regular method lets them down’, Ann Furedi of the British Pregnancy Advisory Service said.

It’s this euphemistic disregard for a life that is so disturbing – as if it were no more complex an issue than having a tooth removed.

The fact is that abortion is increasingly seen as a commonplace procedure, with clinics rubber-stamping applications, no questions asked.

What has been lost from the debate in this country and Ireland is that abortion isn’t the only option for an unwanted pregnancy. 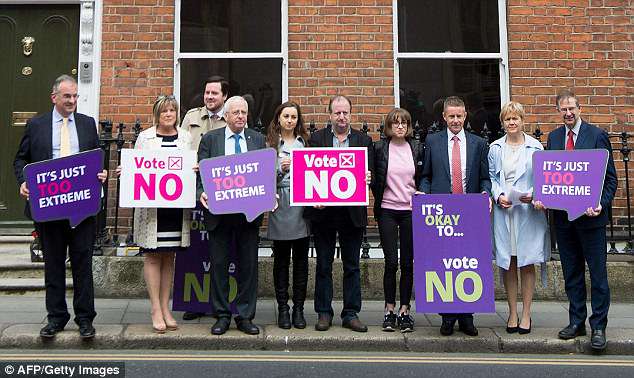 Activists from the ‘Love Both, Vote No’ campaign hold up placards before Friday’s referendum

A few weeks ago I visited Ealing, west London, to interview clients, passers-by and members of the pro-life group Good Counsel Network outside the Marie Stopes clinic, prior to Ealing Council’s vote banning demonstrators from outside.

I was deeply impressed by what I found. I couldn’t help concluding that the pro-life demonstrators – a group of committed Christians – represented the first time many of these vulnerable women were offered a genuine choice: an alternative to abortion.

They were not protesting, far less harassing and not even attempting to change minds. They were simply handing out information.

The information they offer is that an alternative exists for women who would prefer to keep their babies. That women who fear eviction, or loss of employment; whose partners have threatened to leave, or worse, report them for illegal immigration; that those who have assumed they have no choice but abortion, can be given help, support, accommodation, food and clothes in order to keep their babies if they prefer.

You’d think no one could object to this, right? Wrong. This offer of actual real-life choice prompts fury from the supposedly pro-choice campaigners.

So I can’t help wondering how democratic this change will actually prove to be. For instance, as soon as the result was known, the talk was all about putting pressure on Northern Ireland. Excuse me? How is that democratic?

So I fear not just the loss of unborn life. But also the loss of free speech, particularly from those saying abortion isn’t necessarily the only option.

And that, for me, is a loss of genuine choice.