Anne Hathaway was spotted working on the New York City set of the upcoming biographical drama series WeCrashed on Wednesday.

The 38-year-old actress appeared to be in a serious mood as she sported a nearly all-black outfit and kept her eyes fixated on the ground while moving around the project’s production area.

The upcoming series is based on the rise and fall of startup WeWork, and it is set to make its debut on the AppleTV+ streaming service in the near future.

Hathaway sported a sleek button-up dress that obscured much of her frame while she worked on the project’s set.

The Les Miserables star also sported a pair of black velvet shoes that complimented her main article of clothing.

The Academy Award-winning actress accessorized with a single necklace and a set of dark dual-tone sunglasses.

Her typically free-flowing brunette hair remained tied back in a tight bun for the duration of filming. 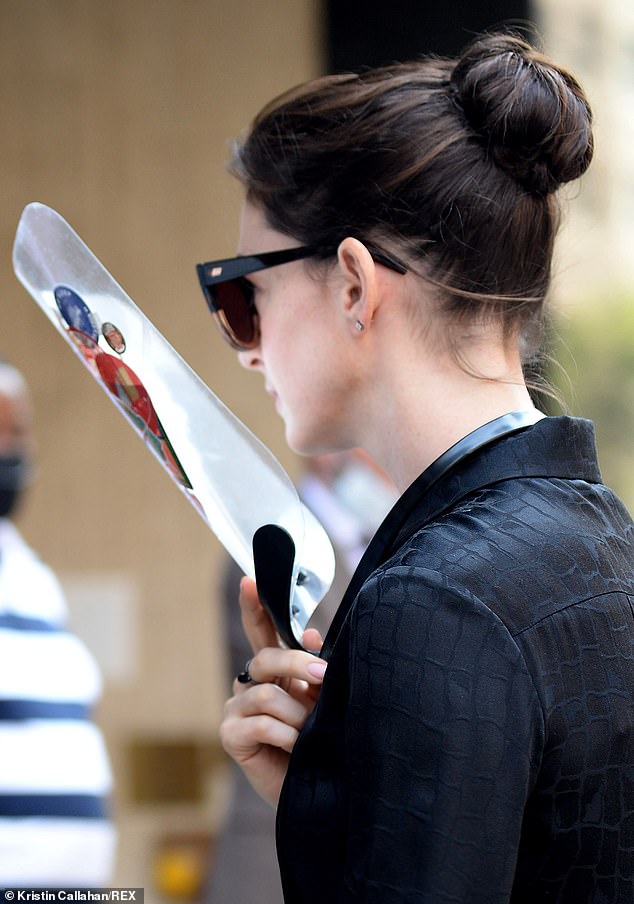 Keeping it simple: The performer sported a black button-up dress that obscured much of her frame during the shoot 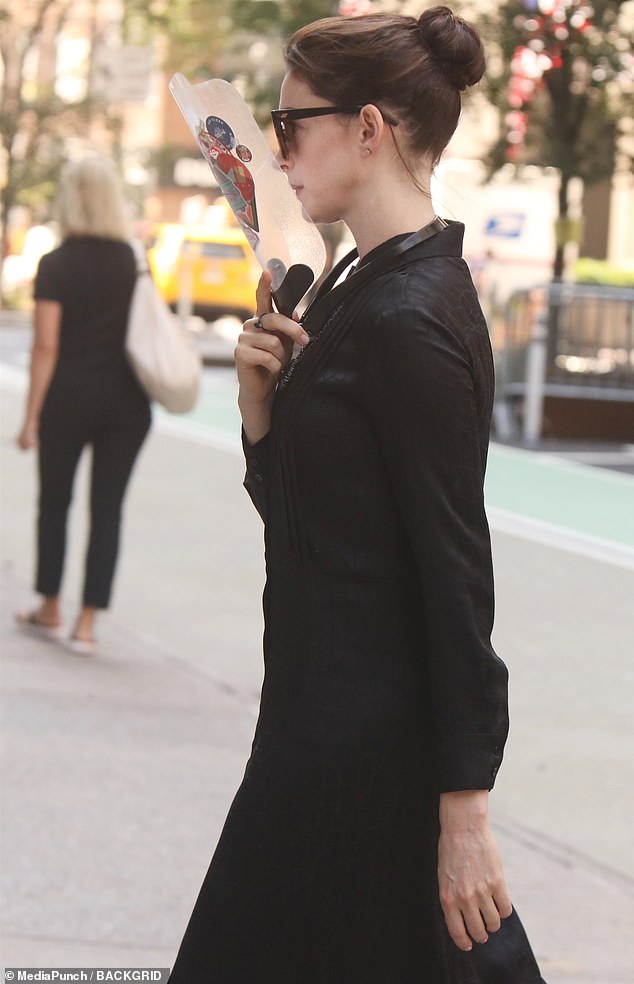 Staying safe: The performer notably kept a stickered-up facial covering with her to keep herself protected from COVID-19

Hathaway also partially obscured her face with a stickered-up facial shield to keep herself protected from COVID-19.

Development on WeCrashed was first announced in February of 2020, and an official confirmation about the project was made that December.

The series is based on the podcast WeCrashed: The Rise and Fall of WeWork, which was presented by David Brown.

Lee Eisenberg and Drew Crevello were later given credit for creating the series, while creative partners John Requa and Glenn Ficarra will direct each episode. 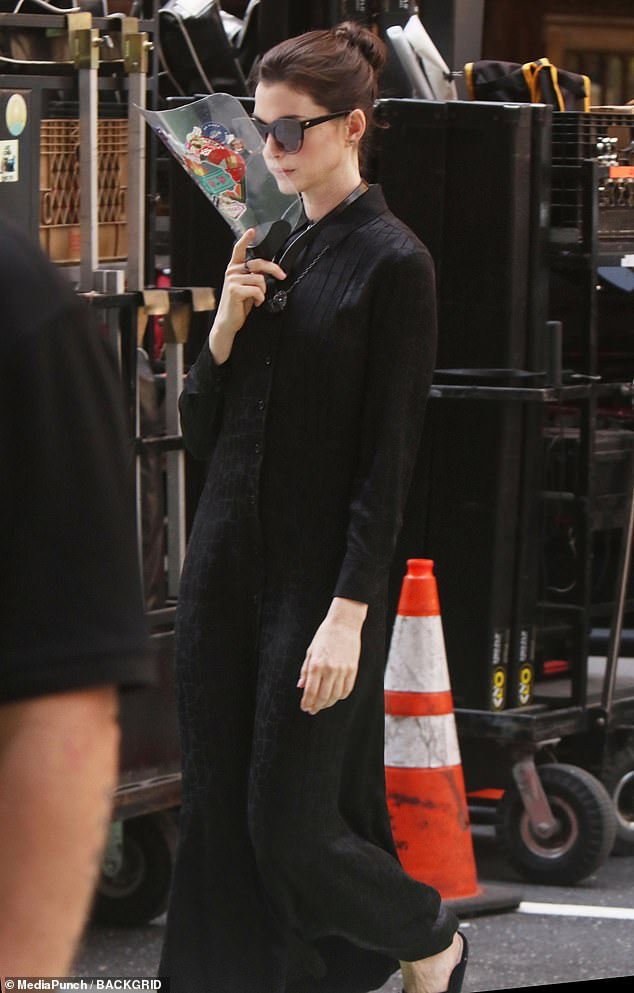 Source material: WeCrashed is based on the podcast WeCrashed: The Rise and Fall of WeWork, which was presented by David Brown

Jared Leto was later added to the cast as WeWork founder Adam Neumann, while Hathaway will portray his wife, Rebekah.

Other performers who will appear in the upcoming program include America Ferrera and O.T. Fagbenle.

Principal production had commenced prior to this past May, and it is currently scheduled to conclude later this year.

WeCrashed will run for a total of eight episodes, and its release date has not been made public as of yet. 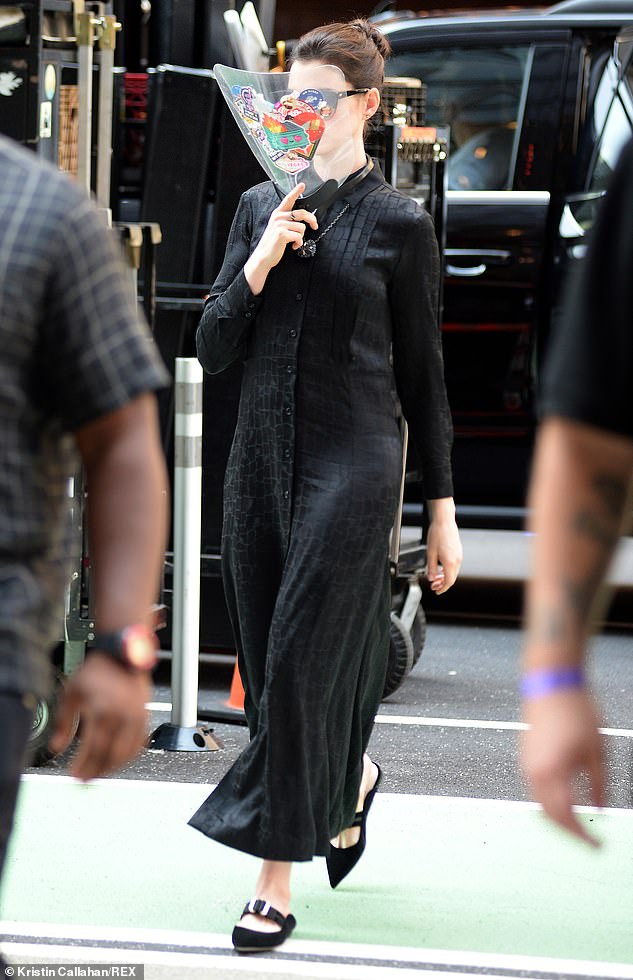 Stacked cast: Also set to appear in the forthcoming series are performers such as Jared Leto, America Ferrera and O.T. Fagbenle

A separate series centered on WeWork from showrunner Stephen Falk was also previously announced to have been in the development stage.

Succession’s Nicholas Braun is currently set to star in the forthcoming project, which was set to begin filming last year.

A film based on the saga of the ill-fated company is also being developed, with The Big Short’s screenwriter, Charles Randolph, penning its script.

The existence of the project was first made known to the public in 2019, and a potential release date has not been set. 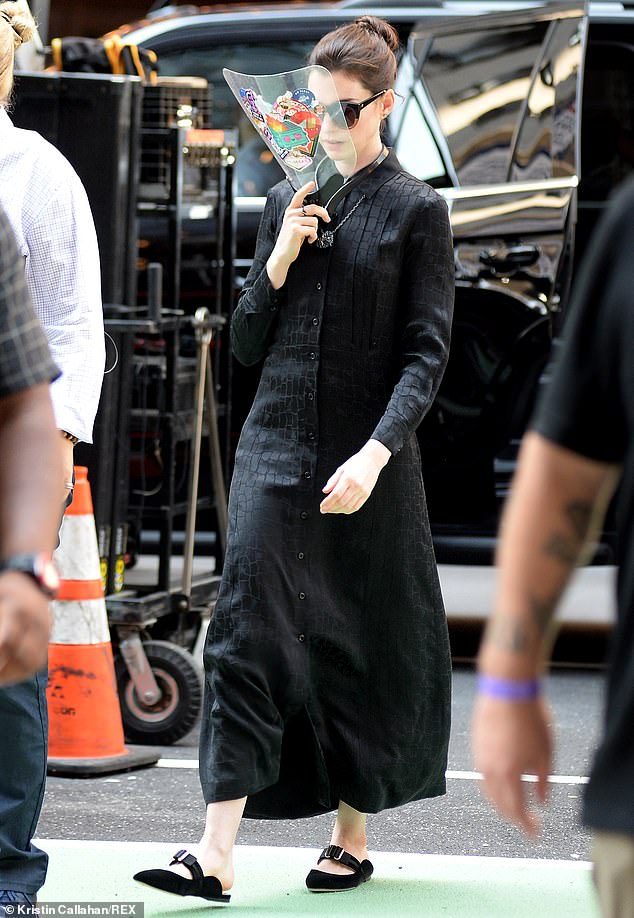 Several projects: A separate television series and a film based on the rise and fall of WeWork were also previously announced to be in development