Anne Heche’s mom, 85, has now lost FOUR of her five children and husband, who died of AIDS

Anne Heche’s Christian psychologist 85-year-old mother had already survived three of her five children, and her husband, prior to the tragic death of her actress daughter on Friday.

The Six Days, Seven Nights star was pronounced dead on August 12 at the age of 53 a week after she was involved in multiple car crashes. Heche first slammed into a garage at an apartment building, then careened into a home in her blue Mini Cooper leaving her ‘severely burned’ and ‘intubated’ in a hospital.

Anne Heche’s family has been beset with tragedy, beginning with the death of her sister Cynthia Heche in infancy due to a heart condition, secretly-gay patriarch Donald Heche dying from AIDS in 1983, and later that same year, brother Nathan Heche was killed in a car accident in New Jersey at 18.

The actress’s troubled relationship with her family first became public knowledge following the release of her 2001 memoir Call Me Crazy, with Anne estranged from her mom as a result of her lesbian romance with Ellen DeGeneres.

Anne Heche pictured with her mother, Nancy, at the premiere for the movie Six Days, Seven Nights in 1997 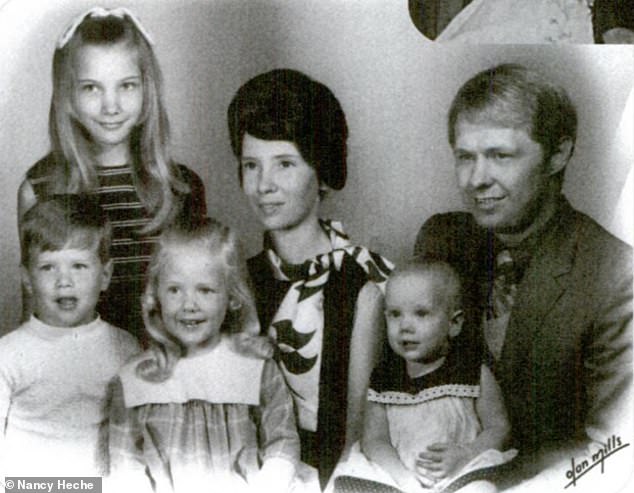 The Heche family pictured in 1970, from left to right, Susan Heche, Nancy Heche, Donald Heche, Nathan Heche, Abigail Heche and Anne Heche. All members of the family bar Nancy and Abigail have since died tragically-young 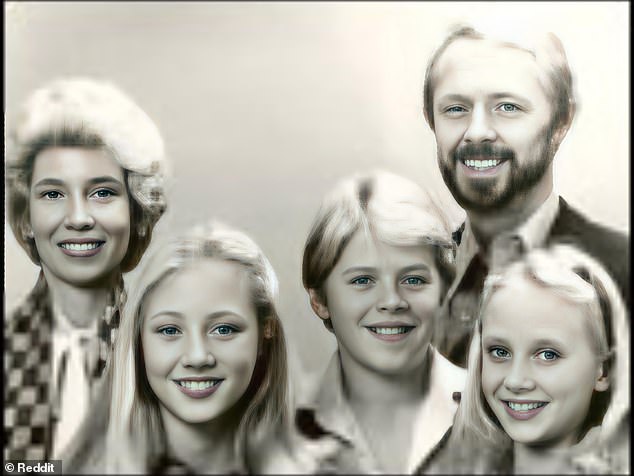 In the book, Heche disclosed that she was sexually abused by her father, Donald, in her youth. She also alleged that he gave her genital herpes as a result of the abuse.

In response to Heche’s autobiography, Nancy Heche said: ‘I am trying to find a place for myself in this writing, a place where I as Anne’s mother do not feel violated or scandalized.’

Both Heche, and her older sister Susan, revealed in their separate books that Donald Heche lived a bizarre duplicitous life.

By day, he was a closeted homosexual and God-fearing Baptist choir leader; by night, he left Heche’s mother and four children at home to cruise gay bars in their hometown of Aurora, Ohio.

Nancy wrote in her book, The Truth Comes Out, that during her marriage to Donald, the pair experimented with amyl nitrate, also known as poppers, in order to liven up their sex life.

She said: ‘Don and I used the poppers together. When we first moved to Atlantic City and were living in the house with Don’s ”business’ partner,’ we were given some little bottles of the dizzying stuff ‘to enhance our sex life.’

Nancy continued: ‘But I’m a very non-gay wife coaxed into snigging the poppers as a novelty for our sex life. It seemed innocent enough. Why would I question him?’

Heche’s mother, Nancy, lectured for years on the ‘evils’ of homosexuality following her husband’s death in 1983 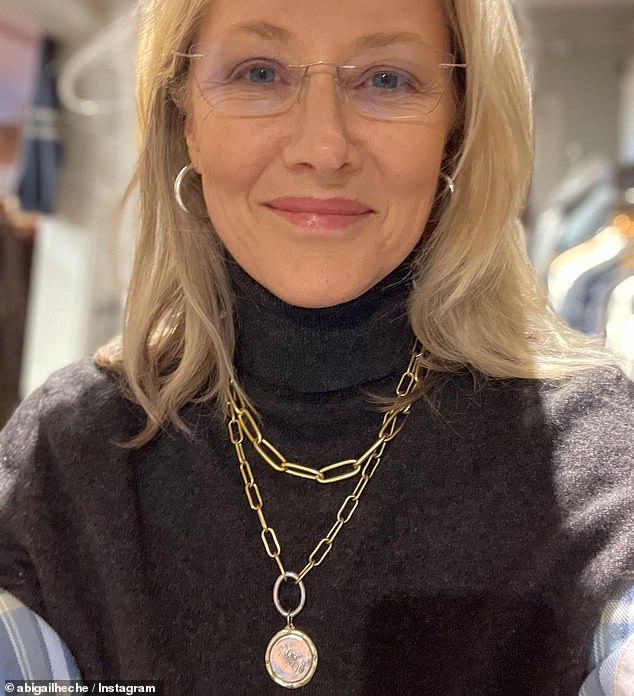 Heche’s other sister, Abigail. She’s an Illinois-based jewelry designer. Heche said in an interview that she had rebuilt her relationship with her sister following a years long absence from each other’s lives

The Heche family matriarch went on to say that after reading an article about the prevalence of poppers in the gay community, she came to the conclusion that both her husband and his ‘business partner’ were homosexuals.

In 1983, Donald Heche became one of the earliest Americans to die of AIDS – just two years after the killer virus was first spotted in a cluster of gay men.

The drama didn’t end there for the family. Anne Heche had long claimed that she was black listed in the early 2000s in the fallout from her public lesbian romance with Elle DeGeneres.

That black listing appeared to extend into her relationship with her mother.

In 1998, Heche told the Tampa Bay Times that her mother believed that her lesbian relationship was a ‘sin.’ 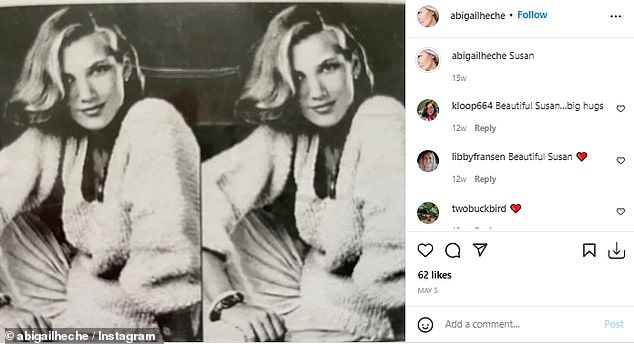 While Nancy Heche told the Christian Broadcasting Network that she felt her daughter’s relationship with Ellen DeGeneres was ‘Like a betrayal of an unspoken vow: We will never have anything to do with homosexuals.’

In a separate interview, Nancy told AL.com in a 2009 that she felt as though she didn’t handle her daughter coming out in 1997 well.

She said: ‘I’m sorry I didn’t know how to deal with it well. God was giving me an opportunity. We had good moments of trying to connect. All of us were learning how to handle it. We loved each other; how do you live out that when you disagree?’ 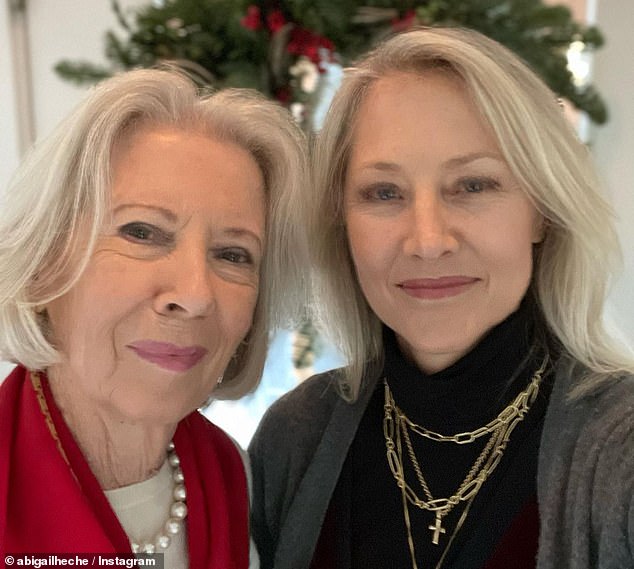 Nancy Heche pictured with her daughter, Abigail. In addition to her mother, Heche said her sister remained distant from her relationship with Ellen was made public

Nancy also said that she found out her husband was a homosexual from his doctor. She said: ‘We fail. We betray each other. It’s a sad story. God had to teach me a lot. We’re to act out of our healing, not out of our woundedness. I was hurt and felt betrayed.’

She also downplayed any tension between her and her daughter saying that they have a ‘typical mother-daughter relationship.’ She said: ‘We connect and we don’t connect. That’s pretty typical. I have a growing relationship, a loving relationship with her. I love her.’

Heche admitted in a 2011 interview with the Daily Telegraph that she had recently begun to rebuild her relationship with her sister following a 20-year feud. The ‘I Know What You Did Last Summer’ star said: ‘She came out to visit last week, and we’re having a wonderful time in our friendship as we’ve gotten closer. We’ve both put our stuff behind us.’

In 2015, Nancy Heche conceded: ‘[Anne has] stopped talking to me. She made the decision to cut off communication.’

Thanks to a role in a 2004 TV movie named ‘Gracie’s Choice,’ where Heche played an abusive alcoholic mother, she told the Los Angeles Times that she came to terms with the idea that her mother didn’t love her.