She announced she would be leaving BBC Radio 1 in April after 17 years on-air.

And after bidding farewell during an emotional final show on Friday, Annie Mac, 43, took to the dancefloor at The London EDITION with a string of celebrity pals.

For her own leaving party, the Irish DJ looked sensational in a lobster-printed multi-coloured flowing maxi dress.

Goodbye! Annie Mac, 43, bid an emotional farewell to BBC Radio 1 after 17 years with a star-studded bash at The London EDITION on Friday

Her raspberry-red painted lips popped against her glowing skin and her beautiful brown tresses had been styled into gorgeous curls.

Annie accessorised her look with a pair of round gold earrings, a delicate chain necklace and a classic black belt.

Donning a comfy pair of white trainers, the Tottenham Hotspur fan was quite the social butterfly as she floated around the five-star boutique luxury hotel to chat the famous faces in attendance. 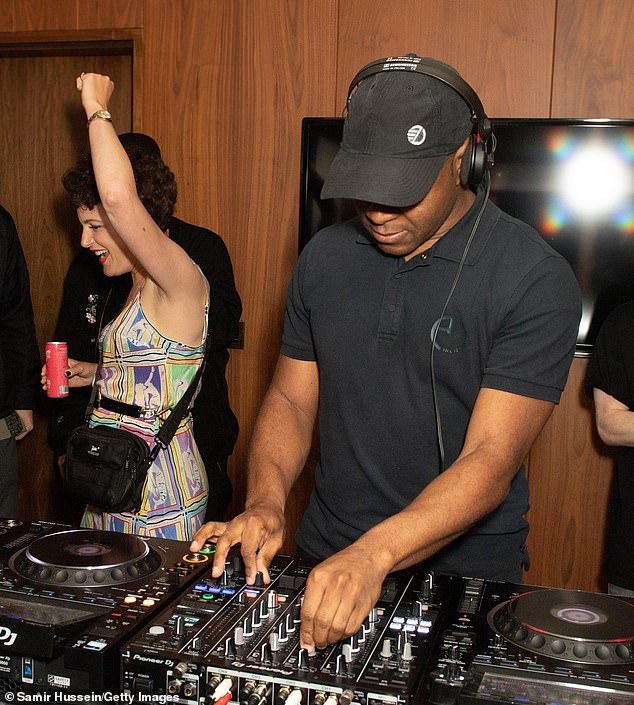 Having a good time? For her own leaving party, the Irish DJ looked sensational in a lobster-printed multi-coloured flowing maxi dress as she danced the night away 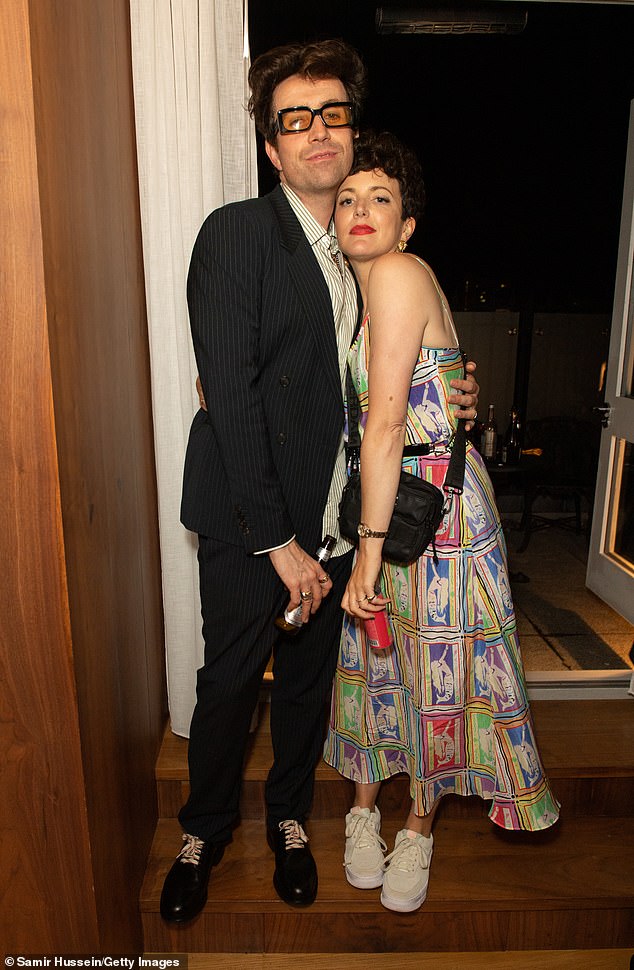 Best pals: Annie was joined by many of her pals at Radio 1 following her final appearance, including Nick Grimshaw 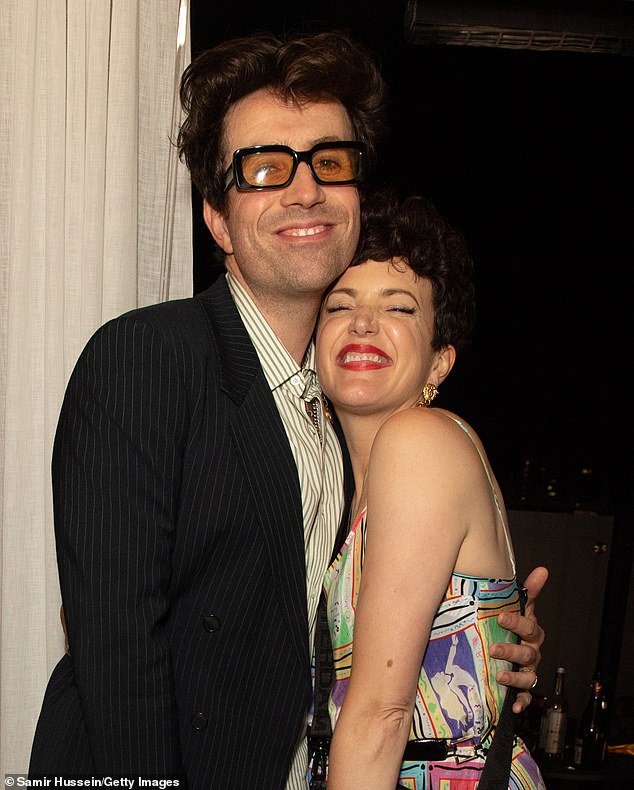 Departing: Nick himself had announced he was leaving Radio 1 last month after 14 years with the station 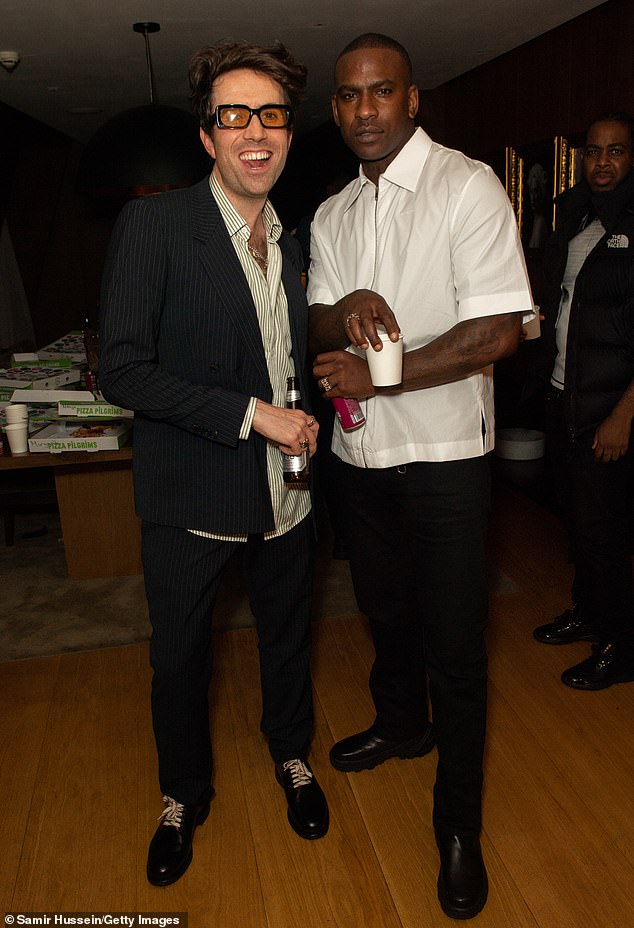 Jovial: He was seen posing with Skepta inside the party after joining Annie for her last ever Radio 1 show 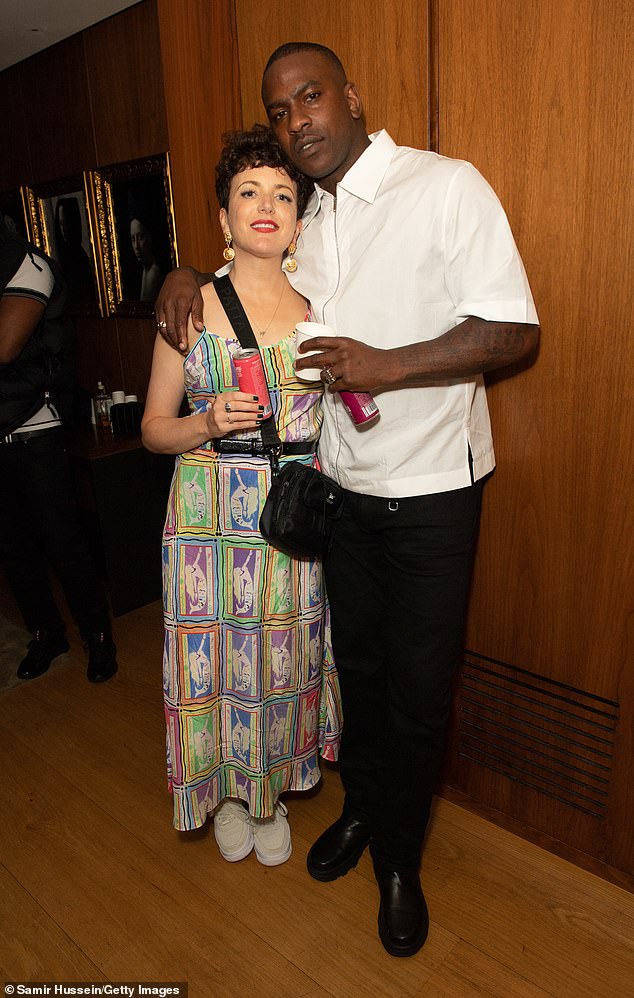 Looking good! Annie appeared alongside Skepta at her leaving bash after recording an emotional final edition of her evening show

At the Soho hotspot was fellow Radio 1 DJ Nick Grimshaw, 36, who sported an off-white and black pinstriped shirt along with a black suit jacket, trousers and pair of boots in the same colour.

He accessorised his look with a pair of oversized orange tinted glasses and had styled his brown locks into a messy quiff.

The drivetime presenter was seen chatting away with rapper Skepta, 38, who showed off his neck tattoos in a simple white short-sleeved shirt, also with black trousers and shoes.

Heart FM presenter Dev Griffin, 36, had tied back his afro and donned an edgy grey motif printed T-shirt for the exclusive event. 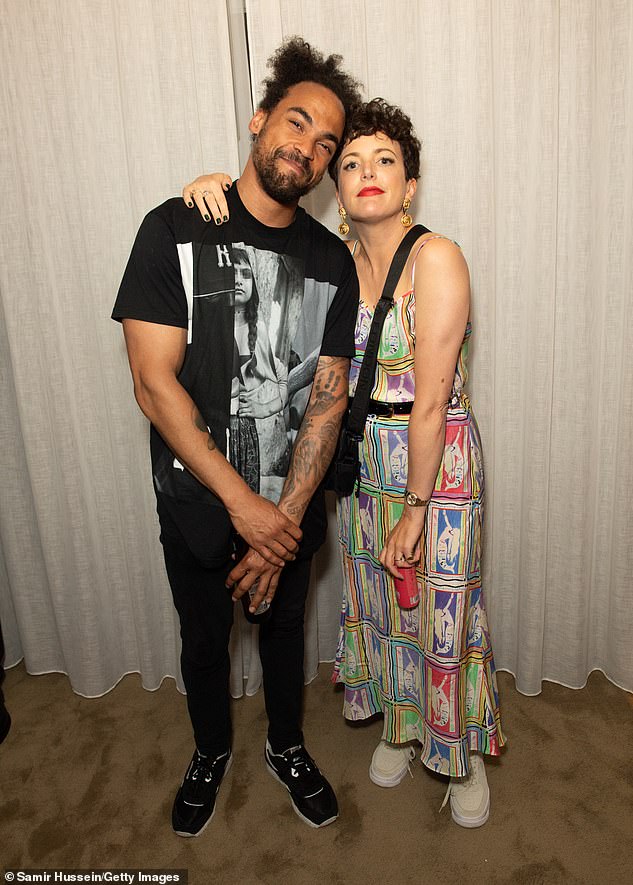 Posing up a storm: Annie was also joined by fellow Radio 1 presenter Dev Griffin as they marked the end of an era at the radio station 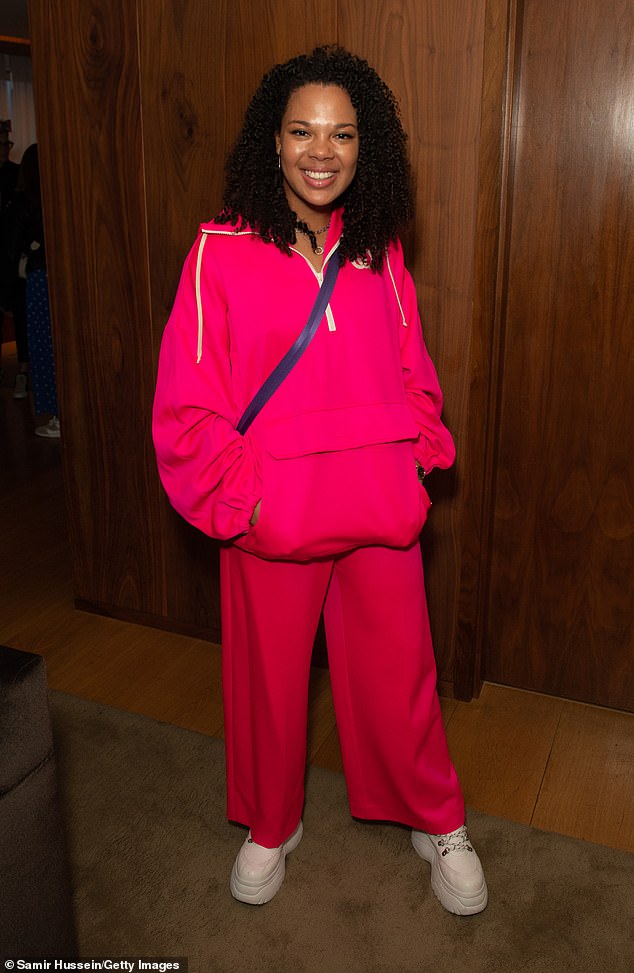 Stylish: Jaguar cut an edgy figure in a fuchsia pink ensemble and chunky trainers as she arrived for the evening

Behind the decks was BBC Radio 1 Xtra DJ Jamz Supernova, 30, who displayed her perky assets behind a shiny brown blazer.

Singer Oliver Sim, 32, who wore a black T-shirt and denim jacket in the same colour, alongside a pair of tan trousers, flashed his pearly whites alongside Nick as they took in the London skyline view from an outside terrace.

Radio 2 DJ Trevor Nelson, 57, looked typically trendy in a black-and-white stripy shirt, which he buttoned-down for the affair, along with a black trench coat and trousers in the same colour. 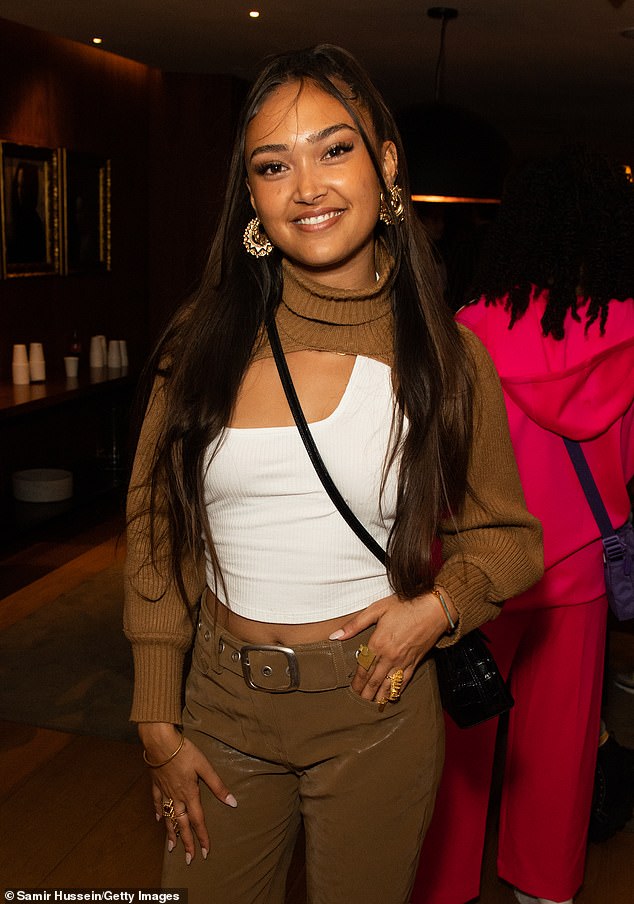 Standing out: Singer Joy Crookes donned a white bodysuit teamed with chic green chino trousers as she posed at the celebration

Singer Joy Crookes donned a white bodysuit teamed with chic green chino trousers as she posed at the celebration.

In true house-party fashion, pizzas were provided by Pizza Pilgrims, freshly made in their Dean Street, Soho pizzeria. The bath of the penthouse was filled with Miami Cocktail Company cans on ice and Asahi provided beers for the evening.

In May elaborated on her decision to leave Radio 1 as she appeared on Tuesday’s episode of  The One Show.

Annie said: ‘The thinking was, I’ve just had the best time and I really wanted to leave Radio 1 feeling like everything was brilliant about my time there and I wanted them to feel that too.

‘It’s the idea of leaving a party when you’re having the best time. I’m conscious of Radio 1 being a place that is, I don’t feel like you have to grow out of or too old of music, its ageless, I just feel like I’m ready for a change.’ 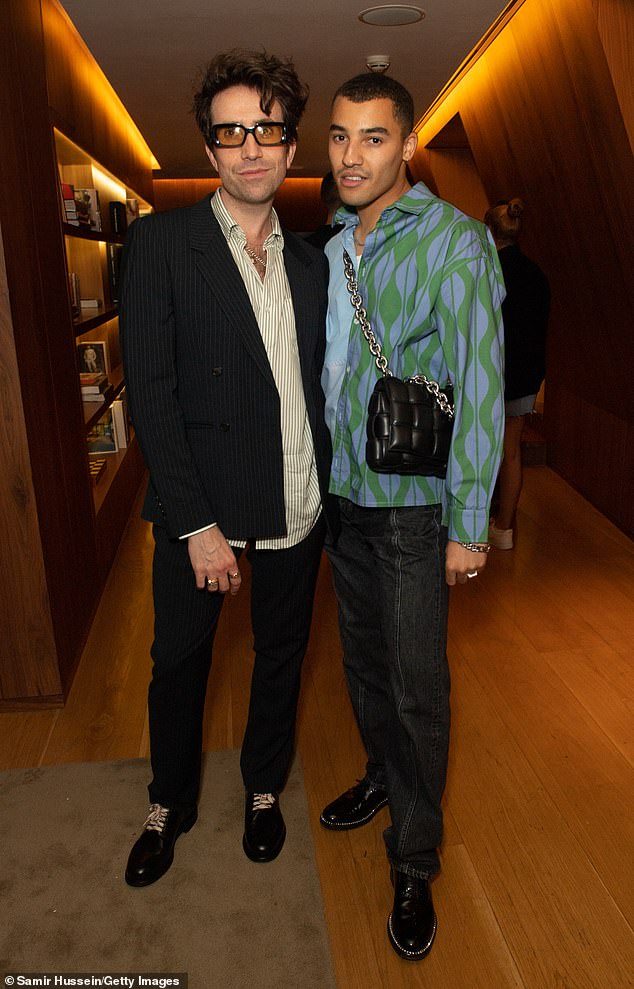 Together: Nick was also seen at the party posing with Meshach Henry

But Annie was quick to reassure viewers that she plans to return to radio at some point after taking a break and figuring out what her next show might look like.

In April Annie announced she planned to leave BBC Radio 1 after 17 years, amid several line-up changes at the station.

Confirming her departure, the DJ told listeners her job at the broadcaster has been like a ‘second home’, as Clara Amfo has been revealed as her replacement on BBC Radio 1’s flagship music show, Radio 1’s Future Sounds. 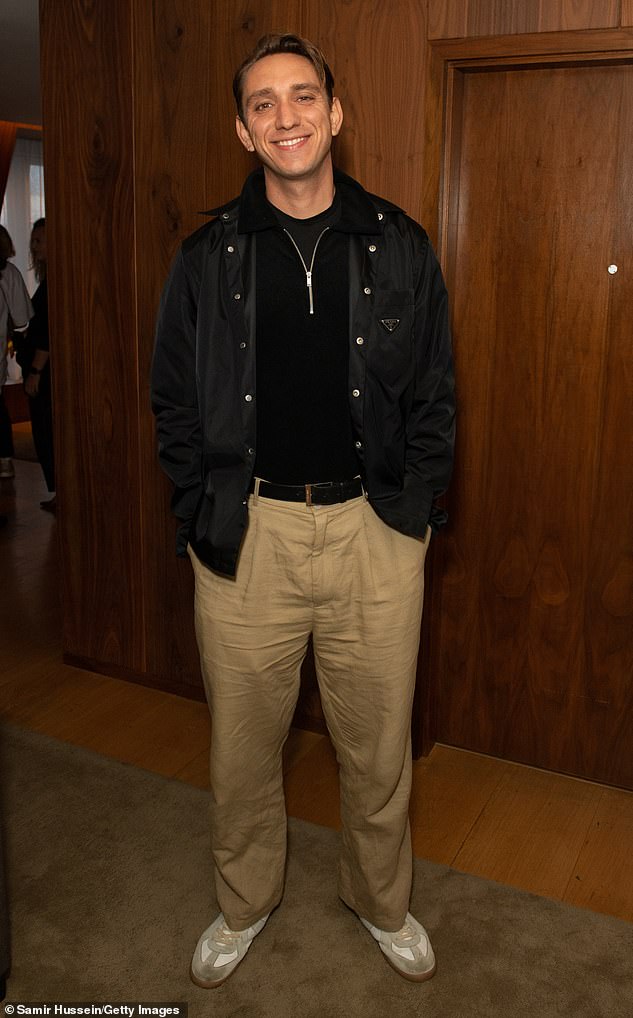 Say cheese! Singer Oliver Sim, 32, who wore a black T-shirt and denim jacket in the same colour, alongside a pair of tan trousers, flashed his pearly whites 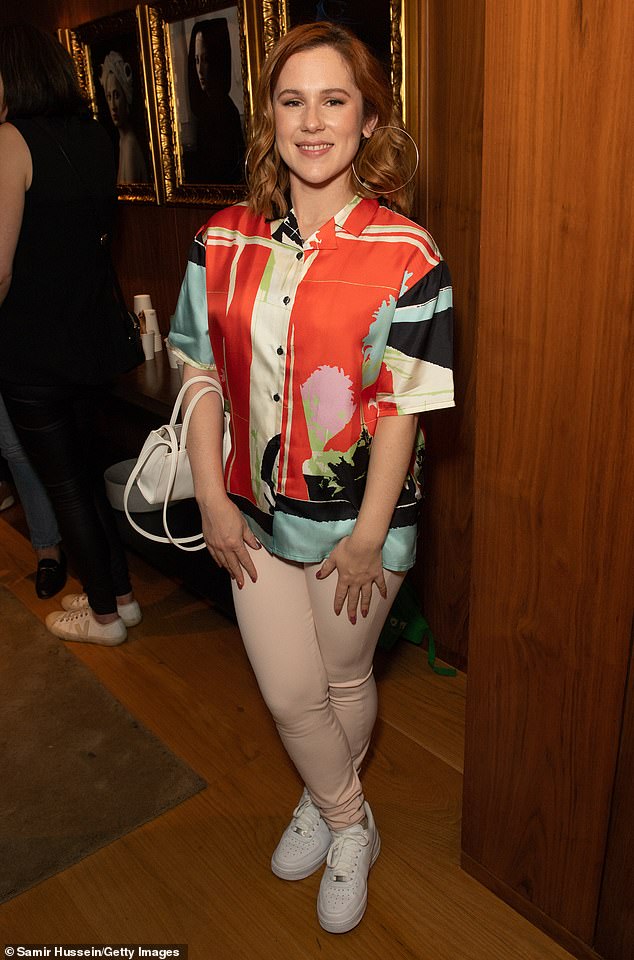 Pretty: Katy B opted for a fun silk paisley printed dress and pale pink trousers as she arrived for the party

She said: ‘After 17 wonderful years I have decided it’s time to leave Radio 1. This second home has been the thread that has run through nearly my whole adult life; I have grown up, fallen in and out of love, moved homes, climbed up the career ladder, got married and become a mother twice over.

‘I have done this alongside you, my listeners, who have done your own versions of the same. I will be forever grateful to you all for welcoming me into your days.

‘I have never not walked out of the studio feeling lighter and happier than when I walked in, and that is all down to you.

‘Working at Radio 1 has been like being at the best party ever and it is a wonderful feeling to be leaving with a huge smile on my face. Thank you, thank you, THANK YOU!’ 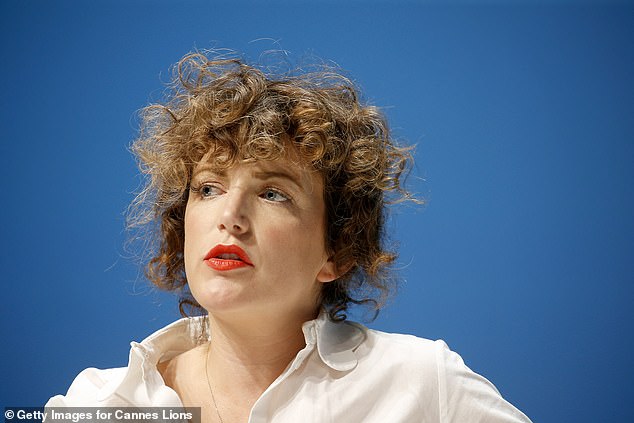 Looking ahead: Annie announced she would be leaving the BBC station in April after 17 years on-air and declared it would be the ‘end of an era’