‘Anonymous’ taunts Trump, warns president ‘will hear from me, in my own name’ before 2020 election

The infamous Anonymous author of ‘A Warning’ continued the charade Tuesday night with an ‘ask me anything’ post on Reddit that revealed the writer will directly confront Donald Trump before the 2020 presidential elections.

‘Trump will hear from me, in my own name, before the 2020 election,’ Anonymous responded on Reddit when a user accused the author of having ‘so little integrity’ not to ‘come out publicly and speak.’

On Tuesday night, the author answered questioned for a full hour on Reddit.

‘I wrote this book to alert the American people about the dangers posed by President Trump as I have seen firsthand,’ Anonymous posted to the subreddit IAmA. ‘I’ll be answering your questions on Reddit from 7 – 8 PM EST.’

A link to Amazon’s page where ‘A Warning’ can be purchased was included in the Reddit post, as well as a link to the book’s publisher, 12 Books’ tweet confirming Anonymous would be answering questions on Reddit.

Anonymous created an ‘ask me anything’ post on subreddit ‘IAmA’ where the author answered questions related to the book, New York Times op-ed and time serving in Donald Trump’s administration 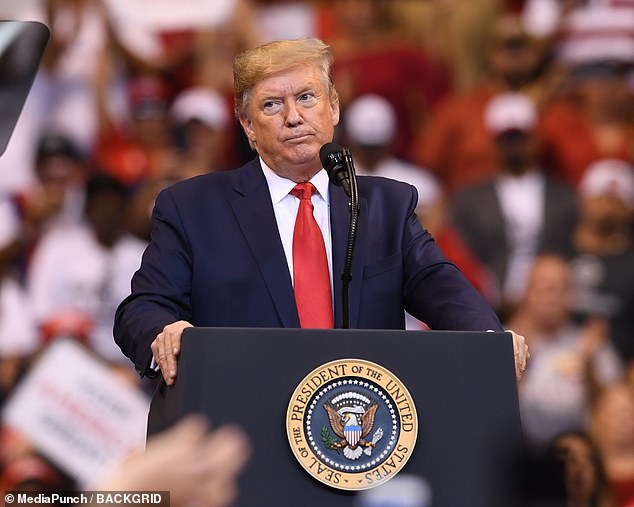 ‘Trump will hear from me, in my own name, before the 2020 election,’ the writer claimed in the post when confronted about the lack ‘integrity’ in writing the op-ed and book anonymously 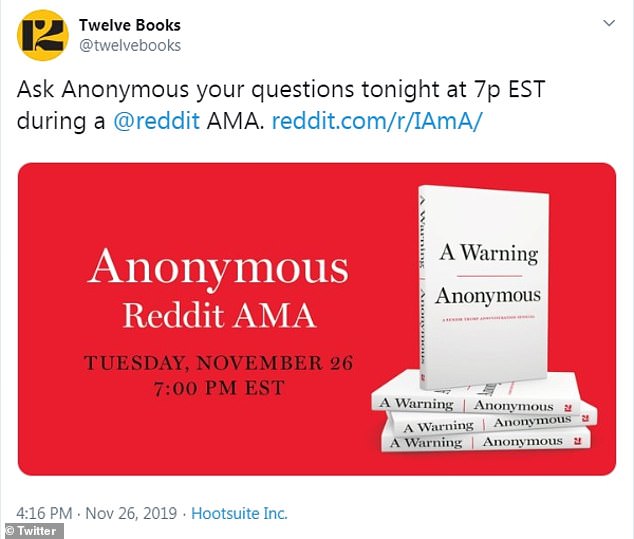 On the post, a moderator admitted Reddit wasn’t able to verify the original poster – or OP – by it’s usual standards, but said publishers of ‘A Warning’ assure them ‘it’s the same guy and we have no reason not to believe them.’

While there were plenty of clues of Anonymous’s identity in the Q&A, the mysterious power player’s name was still not revealed.

On user simply asked: ‘Will Navy beat Army this year?’

Anonymous, who also authored a New York Times op-ed last September detailing a resistance within the Trump administration, used the word ‘lodestar’ in the piece – sparking speculation over who the writer is.

Lodestar either refers to a star used to guide a ship’s course or something that serves as inspiration.

The definition could indicate the author is someone within the Defense Department, which a New Republic writer suggested in a Monday report of a former Navy commander who went to serve in the Pentagon under Trump’s administration.

But others at the time of op-ed’s publication thought the use of ‘lodestar’ led the trail back to Vice President Mike Pence, who often uses the uncommon word.

It appeared Anonymous was playing with those trying to guess the identity, because the word ‘lodestar’ was used in one response, even though Pence has vehemently denied that he is the author described only as a ‘senior official’ in the Trump administration. 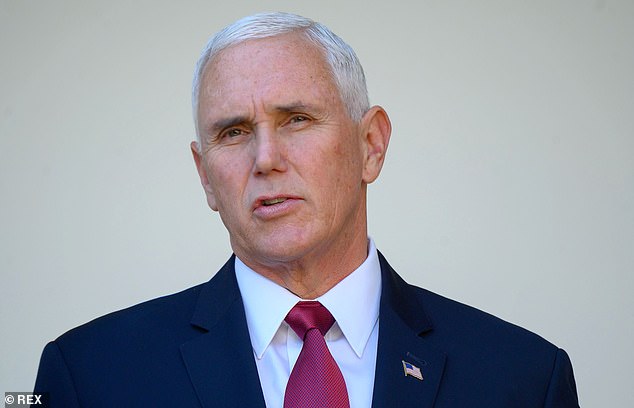 The op-ed used the uncommon word ‘lodestar,’ which Mike Pence often uses, leading people to believe he was behind the op-ed and book – a claim he vehemently denies. In the Reddit post, Anonymous again used ‘lodestar’ when claiming the president has veered from the Republican party’s founding principals 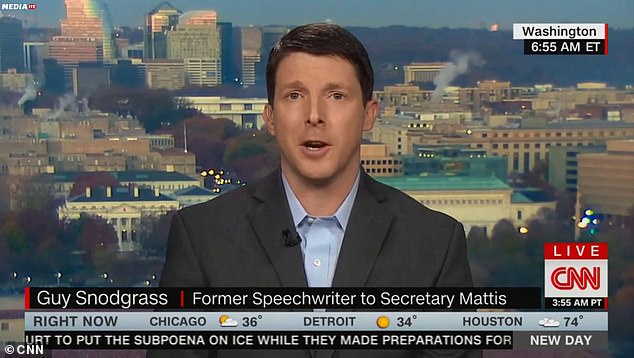 Former Navy commander who went on to serve as Jim Mattis’s speechwriter, Guy Snodgrass, denied on Tuesday that he was the author behind the op-ed and book after speculation swirled. He claimed he puts his names on his books because he feels authors need to have transparency and accountability

‘Do you believe your book provides clues or tangible examples of behaviors of which the republicans can find reasons to distance themselves from the president?’ one user asked Anonymous Tuesday night.

‘I hope so. Our lodestar must be the Party’s founding principles, and the President has veered far from them–the notions of free minds, free markets, and free people,’ Anonymous responded, taking the opportunity to use the word ‘lodestar’ in a possible taunt to Trump.

Guy Snodgrass, who worked as former Defense Secretary Jim Mattis’s speechwriter, shot down suggestions this week that he is Anonymous – which David Kusnet guessed in a New Republic piece this week.

‘No, I’m not the writer,’ Snodgrass told CNN Tuesday morning, claiming he hasn’t even read ‘A Warning.’

He also added that he feels it’s important to put your name to books for transparency and accountability.

One user seemed to feel the same way in asking the author, ‘Why be be (sic) anonymous instead of showing accountability so there is trust?’ 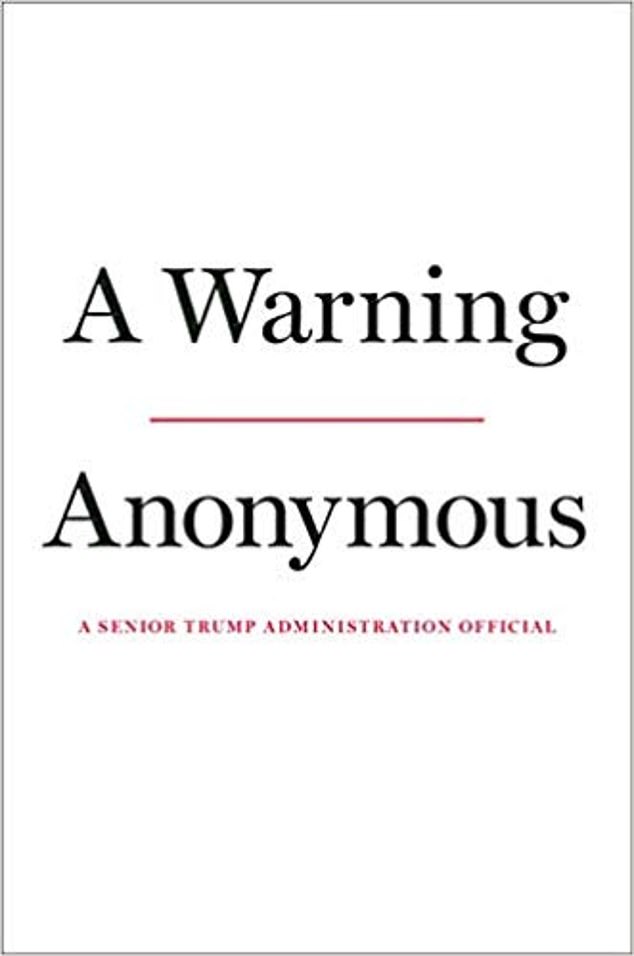 Despite all the denials, Anonymous will remain as such, it details in the book. ‘[F]or now, if asked, I will strenuously deny I am the author of this book, including when the president demands we each disavow it,’ Anonymous wrote

‘Not everyone will agree with my rationale, but anonymity has a long tradition in American politics, as far back as the birth of our Republic,’ Anonymous wrote, adding that when people hide their identities like this they wanted the public to ‘focus on the message and not the messenger.’

Anonymous has claimed not revealing identity is a way to minimize distractions that would take away from what was outlined in the September 2018 op-ed or new book, which was released this month.

‘Trump thrives on distractions, and anonymity is a way to deprive him of his favorite weapon of mass distraction–personal attacks–and force the discussion to center on the substance, his character,’ the author claimed.

Although Snodgrass, Pence and several other administration officials have denied writing ‘A Warning’ and its preceding op-ed, the author admitted that if confronted they would not admit to being the writer.

‘I have decided to publish this anonymously because this debate is not about me. It is about us,’ a passage from the introduction of ‘A Warning’ in the section ‘On Anonymity’ read.

‘So for now, if asked, I will strenuously deny I am the author of this book, including when the president demands we each disavow it,’ Anonymous wrote.