A dancer is overcoming the anorexia demons that ruled her life for more than four-years, made worse by cruel bullies mocked her over losing her dad to cancer when she was 10.

Dance teaching assistant, Sasha-Louise Szymczak, 21, from Birmingham saw her weight drop to just 7st 8lbs when she started surviving on just 300 calories a day and exercising for hours.

After her father, Nick, passed away in 2007 following a battle with bowel cancer, she didn’t know how to cope without him and started controlling her food intake.

Sasha-Louise felt victimised throughout her entire time at school career as she was cast out by her peers, only to go through further stress at university as she struggled with her workload and loneliness.

On top of all that the pressure of the dance industry made her believe she wasn’t good enough and that she just needed to look thin to be accepted.

Sasha’s turning point came when she realised she may not be able to finish her university degree because she wasn’t strong enough for her dance exam.

Now on the road to recovery, she has managed to get herself into a much healthier regime and currently weighs 8st 10lbs.

At the peak of her eating disorder, Sasha weighed just 7st 8lbs. She would survive on just 300 calories a day and exercised for hours to keep her weight down

‘I was always closest with my dad, we would go shopping together, I would go to the pub with him and we would play on the pool tables, he’d take me to the park nearly every day after school,’ Sasha recalled.

‘It really affected me. I felt like I’d lost all feeling of emotion, I cried every night just wanting him to come back, hoping one day he would.

‘I felt lost, out of control. I was being manipulated by a voice in my head telling me food and socialising were unnecessary. The only thing deemed to be acceptable was my anorexia and losing weight.

‘I was diagnosed with anorexia nervosa almost two years ago, but I’ve been suffering with symptoms of anorexia for around four years.’

Sasha was driven to anorexia by school bullies and the pressure of her dancing career as she grieved for her father. Dancing is her passion, but wearing a leotard and tights made Sasha feel insecure about her body 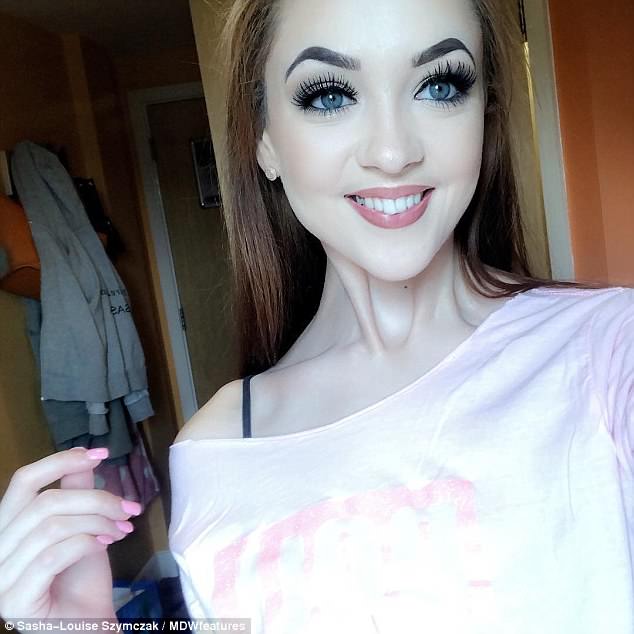 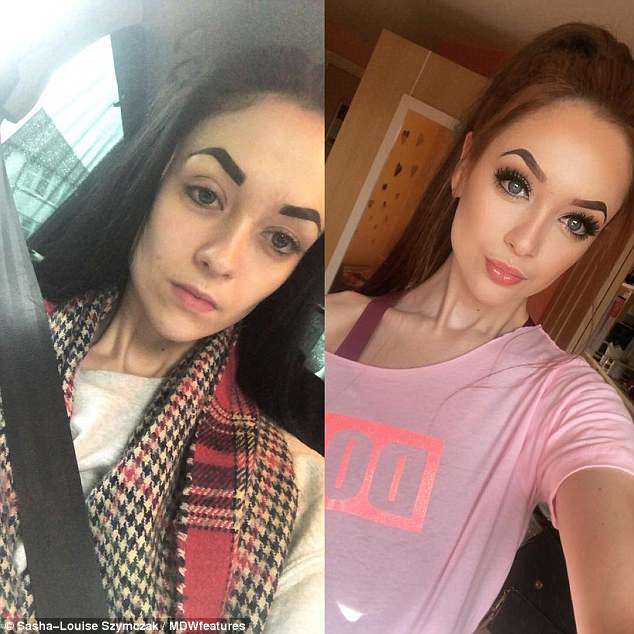 Sasha left, while suffering from anorexia and now during her recovery (right). Her new healthy outlook has helped her carve a future for herself. 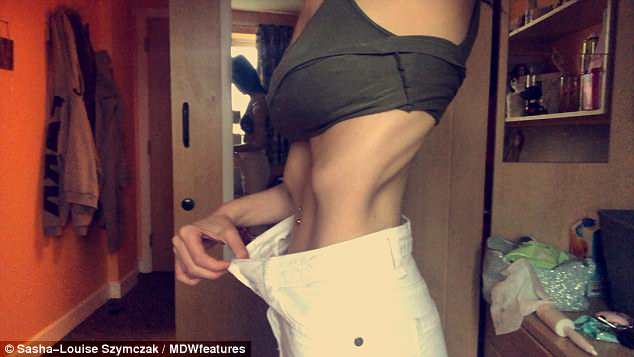 While going through this difficult phase in her life, Sasha didn’t get any respite from feeling pain when she went to school as she was frequently bullied which made her feel even lonelier.

‘I was bullied throughout primary and secondary school, mainly for my Polish surname,’ she said.

‘I was also bullied for certain aspects of my appearance. My eyes were “too big” and my ears “stuck out too much”. 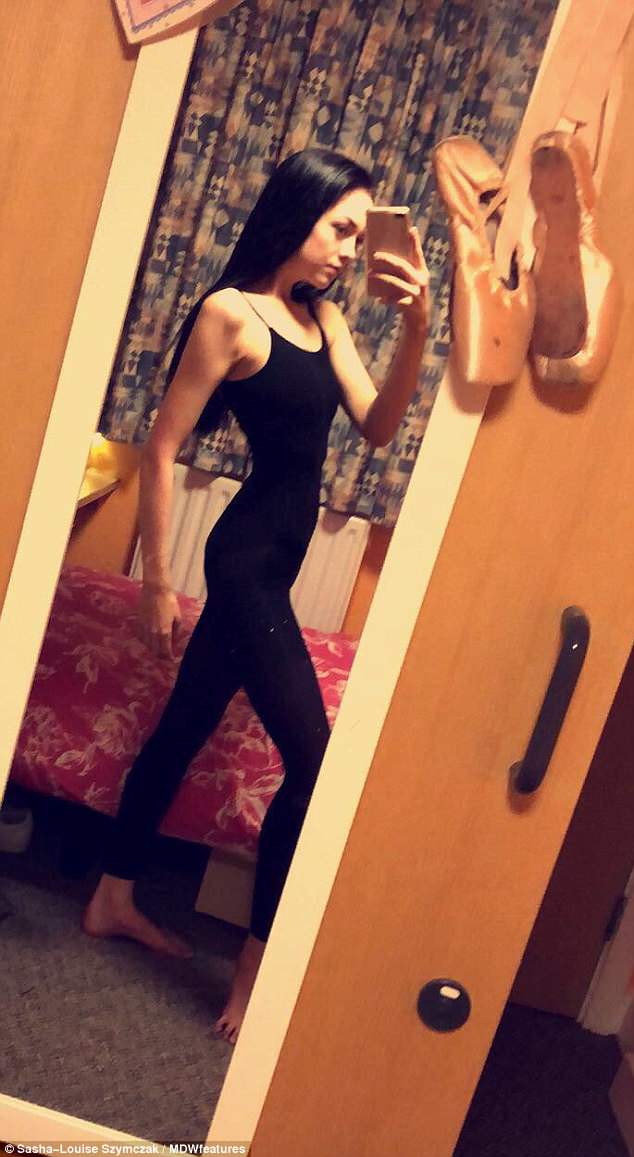 Sasha is now in the process of regaining the weight she was meant to be in the first place and is finally in a happy place.

‘I would get comments about my dad’s passing, with people saying “you only cry at school because your dad’s dead”. I would just generally get horrible comments from people calling me ugly and worthless.

‘I strongly believe dancing was a huge contributor – spending everyday in front of a mirror in the bare minimum of a leotard and tights. It’s hard to hide away from all your “bumpy bits”.

‘My head would scream that my legs were too big to be successful in the industry, that I had to lose weight to be accepted. 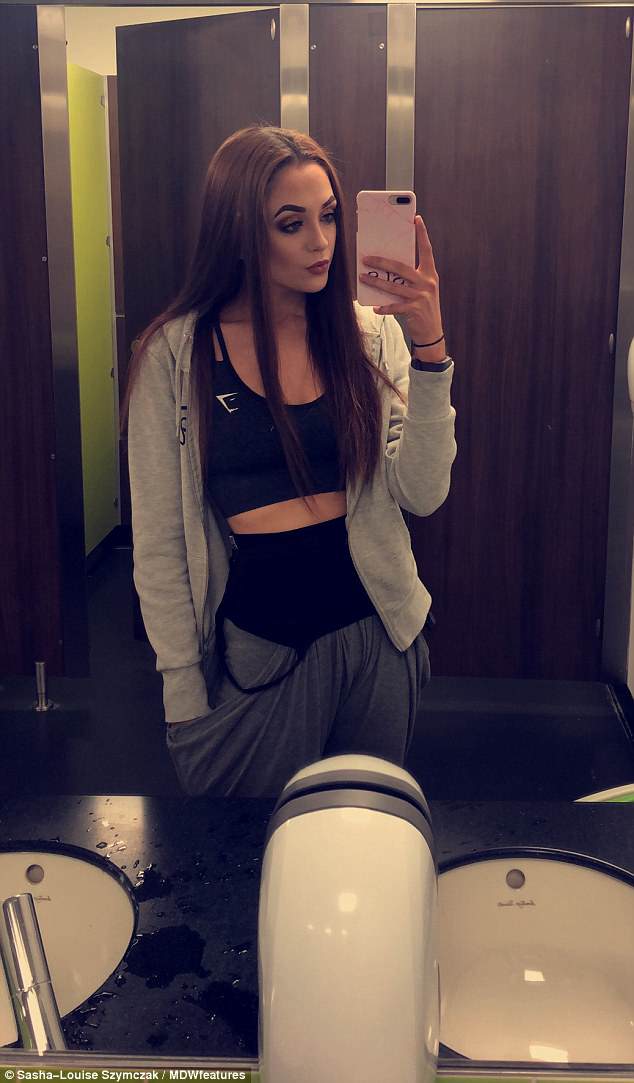 ‘I went through stages in high school when I would only eat salads for lunch and that would be it until I got home for my evening meal.

‘I had a rule of not eating before midday and not eating after six in the evening, giving me six hours to eat.

‘However, I wasn’t “allowed” to eat more than three hundred calories which usually meant a piece of toast, a Muller Light yoghurt, and an apple.

‘I would walk everywhere, and I wouldn’t sit down. I was doing sit-ups in my room constantly as well as doing star jumps before bed. I’d also go to the gym for hours on end and dance for hours with no energy because I just wanted to be thin.’

Dance teaching assistant Sasha felt victimised throughout her entire time at school, but is now overcoming her demons

Although not fully recovered yet, Sasha has seen her confidence grow immensely in the few months since she turned her life around.

Sasha is now able to see the severity of her illness and she no longer wants to feel controlled by it. She can now look forward to her future and having children, but most of all, loving herself and her body.

‘I was advised not to take part in a dance exam due to my ill health causing my underweight and malnourished body.

‘I went ahead with it anyway which resulted in my legs giving way three times and collapsing. Only then did I see what I was doing to my body,’ she added. On the left, Sasha is shown before her recovery process, while the right shows her healthy and happy

‘The smile on my face wasn’t genuine, my eyes were dead, I was broken. I was manipulated into thinking the only way up was to get the number on the scale down.

‘But enough was enough, I wanted to live. I’m now halfway through my recovery journey and things are starting to look up.

‘I don’t like to think I’m “gaining weight”, instead I’m regaining the weight that shouldn’t have been lost in the first place.’