A woman with anorexia and bulimia who once weighed five stone and tried to kill herself has made a full recovery after taking up yoga.

Lydia Davies, 27, became vegan in 2010 but her focus on eating quickly morphed into the disorders and she kept dramatically losing weight for years.

A waitress from Surrey, Miss Davies battled with them for many years – becoming so bad she would only eat three spoonfuls of tinned asparagus a day.

But after a holiday on her own last year, she says yoga has changed her life and that mastering handstands has helped her recover from her eating disorders. 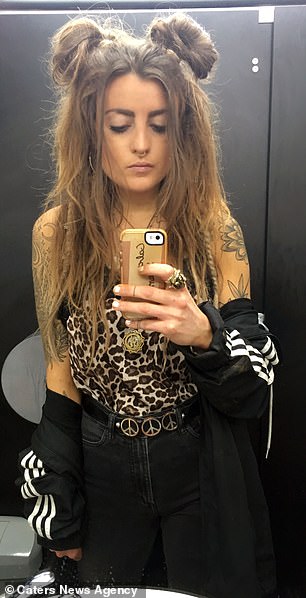 Lydia Davies, now 27, became anorexic after she got hooked on losing weight when she turned vegan in 2010. At her worst she weighed just five stone (31kg) and she tried to kill herself, but she has now recovered which she says is thanks to her travelling and yoga

‘Last year I started yoga and finally accepted myself as I am,’ Miss Davies said. ‘I went on a holiday by myself, just before Christmas.

‘During this silent holiday I was doing yoga every day until I saw someone on Instagram doing handstands and I thought to try it as well.

‘It has helped me a lot, it kept me focused because a great amount of balance and concentration is required.’

After becoming hooked on losing weight when she turned vegan, Miss Davies kept shedding the pounds until she lived off Starbucks drinks, raw vegetables and diet coke.

During a family holiday in Cuba, she started eating even less and secretly exercising, wanting to look good in a bikini.

And while on a second holiday in Zante she survived on just salad, cigarettes and ice tea.

Miss Davies said: ‘I have been a vegetarian by choice since I was 13 and in 2010 I gave up chocolate for lent.

‘I started losing weight and I liked that, until Easter Sunday when I ate so much chocolate, with my brother.

‘We felt so bad about it that we decided to try going vegan for a year and eventually he forgot about it but I took it very seriously. 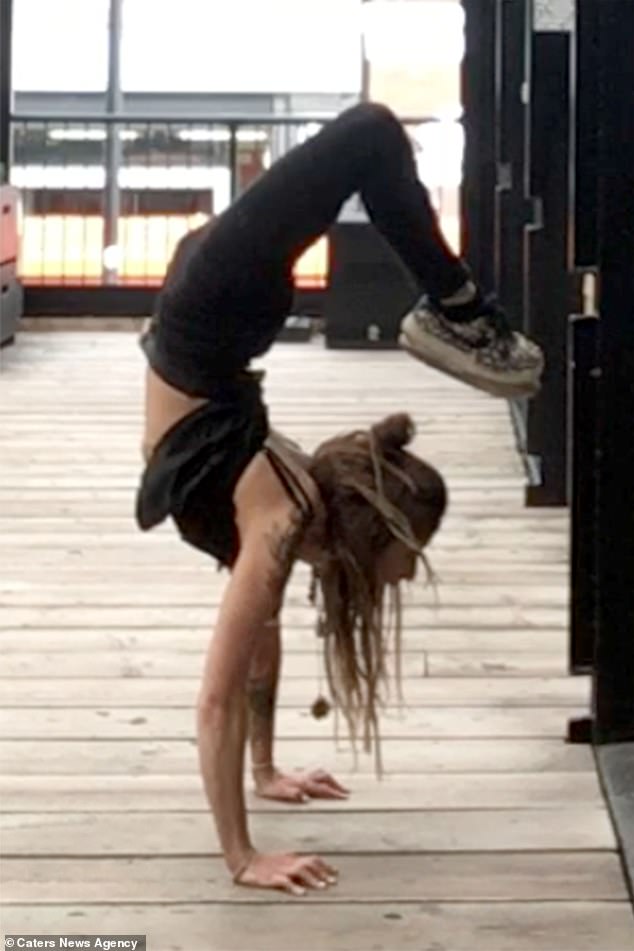 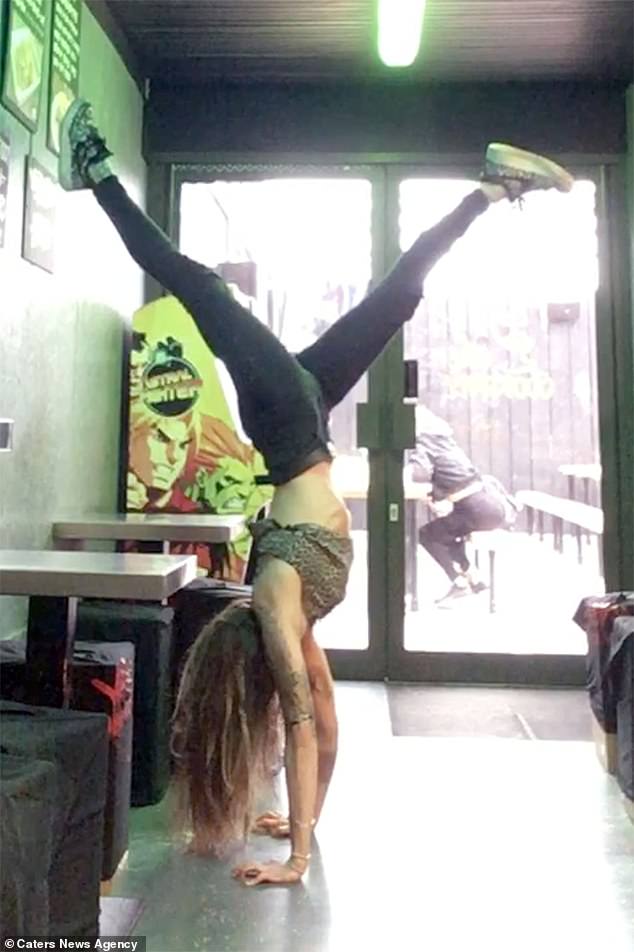 Miss Davies, pictured doing a handstand, now wants to become a yoga instructor and to help other people going through the same things she experienced

‘My friends were all worried about me. I was terrified I was going to gain weight I was taking laxatives, even though I actually lost weight during the holiday.

‘All I remember was lying on the sunbed next to the pool and feeling the plastic was hurting me. I had to put towels underneath me but I was still in pain.’

The problem got worse a few weeks later when she threw up food for the first time after panicking over finishing off a bowl of soup and a salad.

Her family was particularly worried about her, advising her to stop veganism and start eating more before going off to University in September 2012.

Miss Davies ended up eating as little as possible and went down to a dangerously light five stone (31.7kg).

Eventually she was eating just three teaspoons of tinned asparagus a day as her only source of nutrition but it wasn’t only her body that was changing.

The thrill of her shedding the pounds had become her obsession and if she didn’t feel she was losing any weight she would just do some exercise or encourage herself to be sick.

Miss Davies and her brother had committed to cutting out meat and dairy after feeling guilty for eating so many Easter eggs in 2010, but she quickly got addicted to the feeling of losing weight and spiralled into life-threatening anorexia 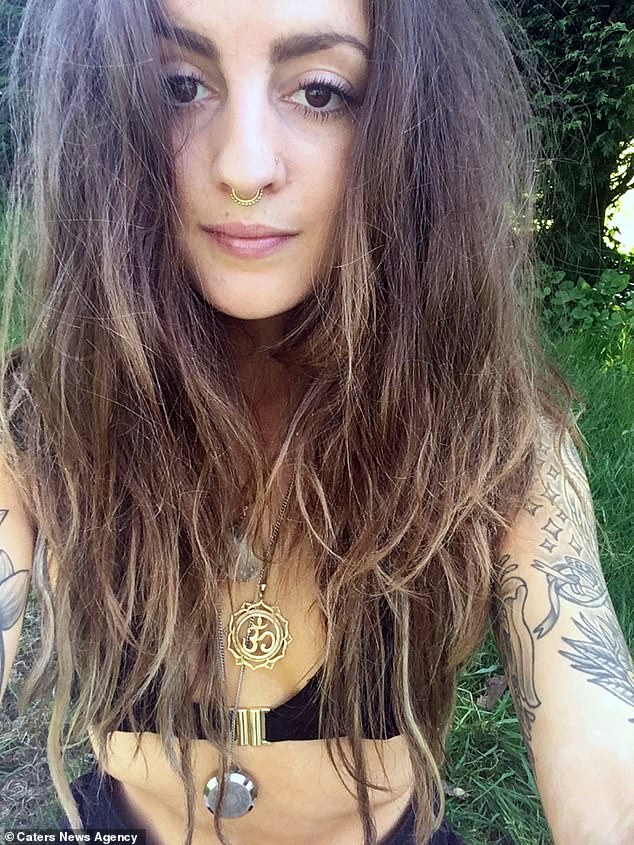 Miss Davies said her perspective changed when she went on holiday by herself last year, and she ‘finally accepted myself as I am’ (pictured recently)

Anorexia is a serious mental illnesses where a person restricts their food intake, which often causes them to be severely underweight.

‘The University was worried about me as well and I was referred to an eating disorder unit.

‘I was so much in denial they had to breach the contract and inform my parents – I eventually moved back with my parents and continued recovery as an outpatient.

‘My medical risks were particularly high, even in my first appointment I was told I was going to die if I kept going.

‘I had osteoporosis, I was losing hair, my muscle was wasting, I needed to have my heart and blood monitored on a weekly basis and my period stopped so infertility was a possibility.’

Miss Davies was determined not to eat so she was secretly dumping the food in several bins and not following any meal plan.

She became housebound as burning too many calories could be dangerous and so wasn’t allowed to walk or drive.

She said: ‘Starting eating and gaining weight made me switch to bulimia. I was spending most of my days trying to eat more, to the point that I was unable to stop.

‘Then the shame and the guilt would lead to purging and that kept going for another two years.

‘I had attempted suicide several times, trying to cope with depression and suicidal thought, I once drank some cleaning products and I also overdosed twice.

‘Being vegan has slowed down my progress but I am glad I did it. It took me six years to recover but it’s my belief and I wouldn’t change it.’

Miss Davies said travelling to Bali, Australia and Thailand helped her become inspired and gave her the drive to recover. 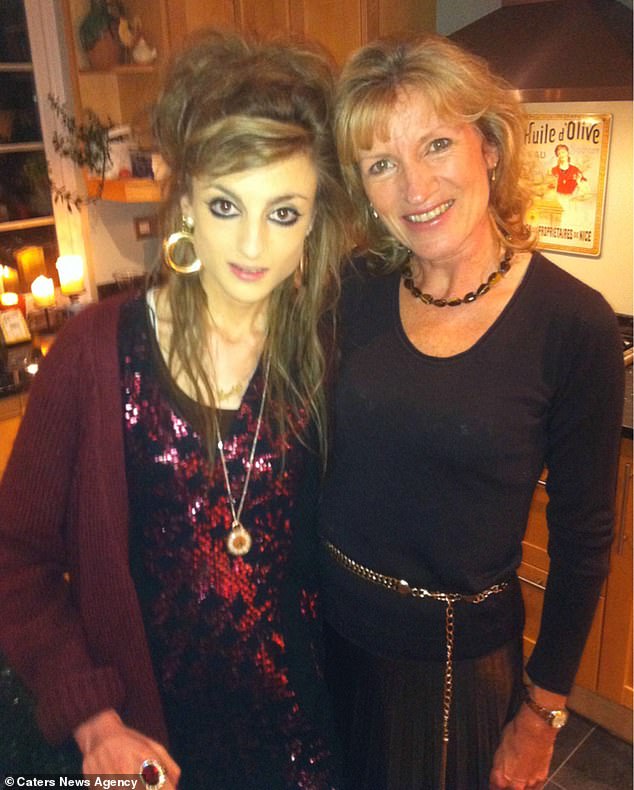 Miss Davies, pictured with her mother Beverley while she was anorexic, became housebound because she didn’t have enough energy to walk or drive when she wasn’t eating

Thanks to taking up yoga, she is now strong and healthy and is trying to raise awareness about mental health.

Miss Davies has written two books, with her most recent one,’ Raw: The diary of an anorexic vegan’ dealing with recovery issues, addictions and mental health.

Her goal now is to become a yoga instructor and be able to help people struggling with recovery.