That is the equivalent of one in five Americans who had been employed back in February when the unemployment rate had reached a 50-year low of just 3.5 percent.

According to a Labor Department report released on Thursday, there were 3.2 million new claims for unemployment benefits filed in the week ending May 2.

More than 30 million sought aid in the previous six weeks starting in mid-March.

Most nonessential businesses remain shut down but the majority of states are beginning to ease restrictions for some categories of companies despite concerns that it may be too soon to do so without accelerating new infections.

There were 3.2 million new claims for unemployment benefits filed in the week ending May 2, according to a Labor Department report released on Thursday 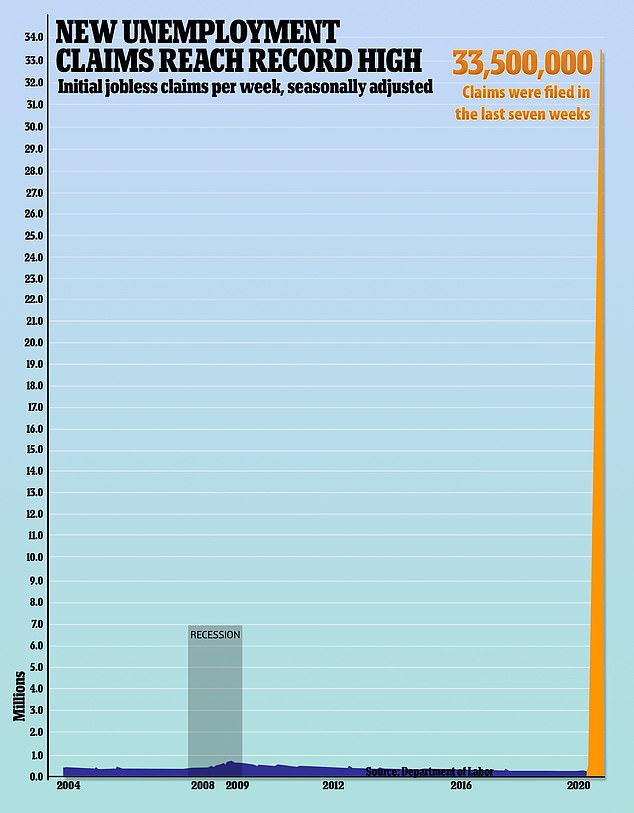 The government will issue its April jobs report on Friday and it’s likely to be the worst since modern record-keeping began after World War II.

The unemployment rate is forecast to reach at least 16 percent – the highest rate since the Great Depression of the 1930s.

Economists are estimating that 21 million jobs were lost last month, which would mean that nearly all the job growth in the 11 years since the Great Recession ended has vanished in a single month.

Even those stunning figures won’t fully capture the magnitude of the damage the coronavirus has inflicted on the job market. Many people who are still employed have had their hours reduced, while others have suffered pay cuts.

Some who lost jobs in April and didn’t look for a new one in light of their bleak prospects won’t even be counted as unemployed.

Minneapolis Federal Reserve Bank President Neel Kashkari says the monthly employment report is likely to understate the number of jobs lost during the pandemic because many people haven’t been actively looking for new work due to stay-at-home orders across the US.

‘That bad report tomorrow is actually going to understate how bad the damage has been,’ he said.

Despite the stark forecast, Kashkari said he was hopeful policymakers could avoid a depression scenario for the US economy after learning lessons from the Great Depression of the 1930s.

Still, Kashkari said the economic rebound was likely to be ‘gradual’ until there was the development of a vaccine or therapy to treat the virus.

He said it could be a while before consumers feel comfortable sitting in a full movie theater or a crowded restaurant and many restaurants may struggle to make ends meet if they are only serving half as many customers.

‘Unfortunately, the recovery looks like it is going to be slow,’ he said.

The official figures for jobless claims may also be under-counting layoffs.

Surveys by academic economists and think tanks suggest that as many as 12 million workers who were laid off by mid-April did not file for unemployment benefits by then, either because they couldn’t navigate their state’s overwhelmed systems or they felt too discouraged to try.

As the economy slides further into what looks like a severe recession, economists are projecting that the gross domestic product – the broadest gauge of economic growth – is contracting in the current April-June quarter by a shocking 40 percent annual rate.

As it does, more layoffs appear to be spreading beyond front-line industries like restaurants, hotels and retail stores. 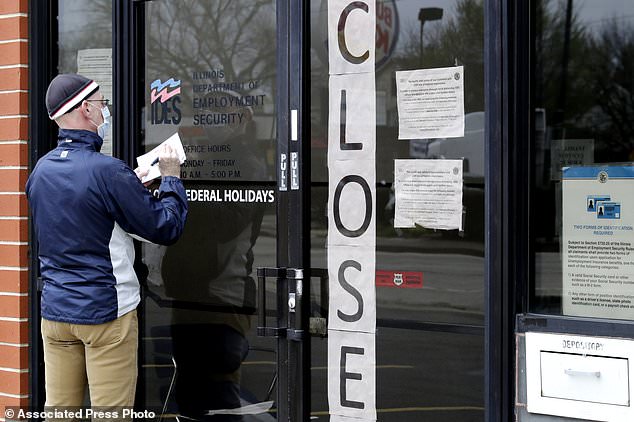 US businesses cut an unprecedented 20.2 million jobs in April, an epic collapse with coronavirus outbreak closing the offices, factories, schools, construction sites and stores that propel the US economy