ANOTHER lottery ‘winner’ claims they have missed out on £200,000 scratchcard jackpot

Another lottery hopeful is claiming to have missed out on a £200,000 scratchcard jackpot after a Camelot ‘misprint’.

Angela Mason, 57, says she matched the correct number of symbols on the Pharaoh’s Fortune card last month – meaning she’s entitled to the prize.

Desperately excited with her supposed win, she ran to the Post Office but was told it could not be verified.

Angela Mason (right), 57, from Willenhall in the West Midlands, claims to have missed out on a £200,000 scratchcard after Camelot rejected her claim 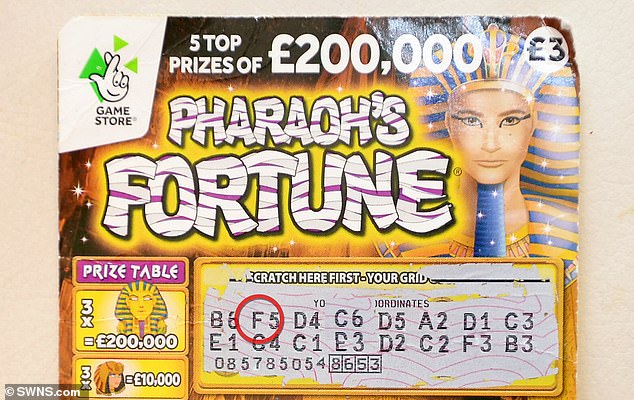 Ms Mason said her claim was rejected by Camelot because it said the circled co-ordinates were an E and not an F. Note this is not the scratchcard Ms Mason claims entitles her to £200,000 in winnings – this is a MailOnline mock-up of the co-ordinates on her card 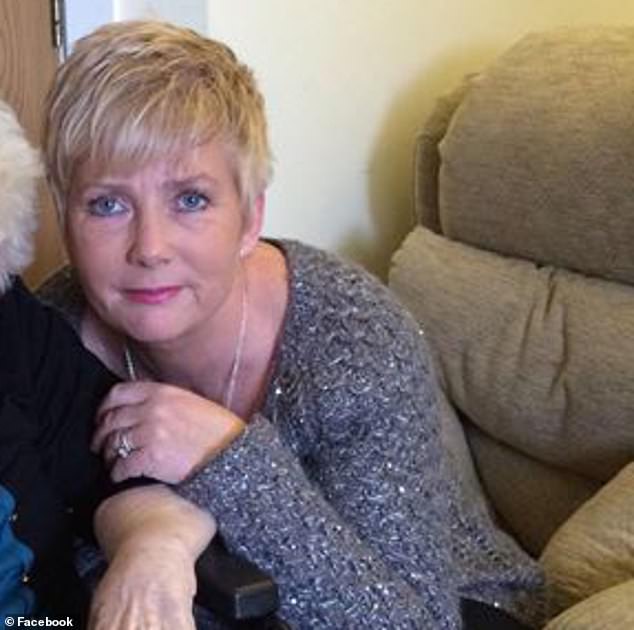 And after emailing Camelot, was reportedly told her win was not genuine and that she had not scratched the card properly.

It reportedly claimed the co-ordinates she thought were an F5 were actually an E5.

The grandmother-of-four from Willenhall, West Midlands, told the Sun Online: ‘Everyone I had showed it to said it was a winner, but I emailed Camelot and five days later they replied and said I hadn’t scratched if off properly.

‘If I had scratched off any more the card would have been wrecked.’

How do the Pharoah’s Fortune cards work?

Pharaoh’s Fortune is a scratchcard game with five top prizes of £200,000.

The scratchcard has two areas – headed ‘your grid coordinates’, with 16 letter and number coordinates; and ‘your grid’, with 36 squares showing a symbol with a corresponding caption.

The owner of a ticket whose coordinates reveal three matching symbols in the ‘your grid’ section win a prize, as indicated on the ticket’s table.

Her claim comes just days after unemployed Eric Walker, 56, of Sheffield was also refused the £200,000 prize for the same scratchcard.

He claimed the big money win after saying he had scratched three matching symbols on the National Lottery’s £3-a-time card.

Sixteen co-ordinates are given on the cards which are used to scratch off squares on a grid in the hope of matching three pharaoh symbols.

But lottery organisers Camelot have refused to pay up saying that one of the co-ordinates on the card was ‘altered’.

The winning co-ordinate F5 appears to have been changed to an E5 – something Mr Walker denies and says must be result of a misprint. In addition, both the F5 and E5 symbols have been scratched off.

‘They’re trying to tell me that an F has been changed to an E but I bought the ticket and scratched it myself. I haven’t doctored it, I’m not trying to cheat.

‘If it’s a misprint then that’s their fault and they should still pay out, it’s nothing to do with me.

‘I’m going to keep pressure on Camelot to sort this out, I’m not willing to let it go.’ 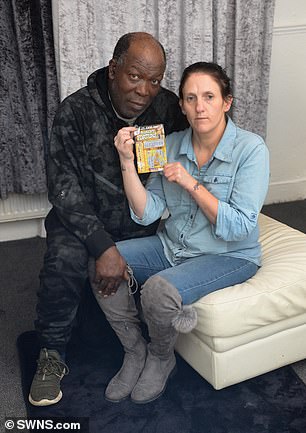 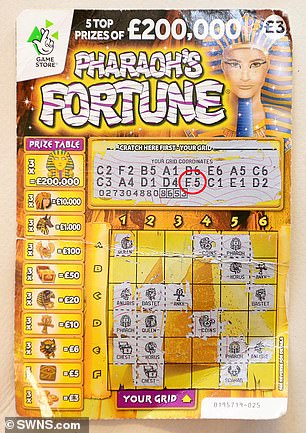 Eric Walker, pictured with his partner Amanda Emmadi, claimed the big money lottery win but was refused it by Camelot. The winning co-ordinate F5 appears to have been changed to an E5 – something Mr Walker denies and says must be result of a misprint (right)

Camelot has insisted that both wins are not genuine however, saying neither card was from a ‘faulty’ batch.

A spokesperson told the Sun Online today: ‘We do not believe this to be a faulty batch as Ms Mason claims.’

In reference to Mr Walker’s claim, a spokesman said: ‘Based on the photo we were sent we were able to re-construct the scratchcard in our system.

‘We can confirm that an F has been altered to appear as an E and is therefore not a winning Scratchcard.’