Another resident dies at a coronavirus-riddled aged care home

A 13th elderly patient has died from COVID-19 at an embattled Sydney care home, with the NSW premier calling the situation ‘horrific’.

Anglicare’s Newmarch House in western Sydney has become a coronavirus cluster, after an infected staff member went to work for six days despite having symptoms.

The outbreak, identified on April 11, is still spiralling out of control, with another three vulnerable residents testing positive in the past 24 hours.

There are now 56 confirmed cases at the home in Cadden, including 34 residents and 22 members of staff.

Anglicare said the 13th resident died on Thursday afternoon, after its CEO admitted the home had become a ‘pseudo hospital’.

‘This is a time of great grief for the family and we want to extend our deepest sympathies,’ Anglicare said in a media statement.

‘The coronavirus has had a devastating impact on all our residents and families.’

The tragedies have prompted urgent calls from medical officials for workers, especially those who care for vulnerable people, to stay home if they feel even mildly ill.

The female worker was said to be ‘mortified and distraught’ that she had been the catalyst for the cluster, which spread quickly through the vulnerable residents.

‘We have talked about this numerous times but now it appears that some staff are still going to work, even when they have symptoms,’ he said. 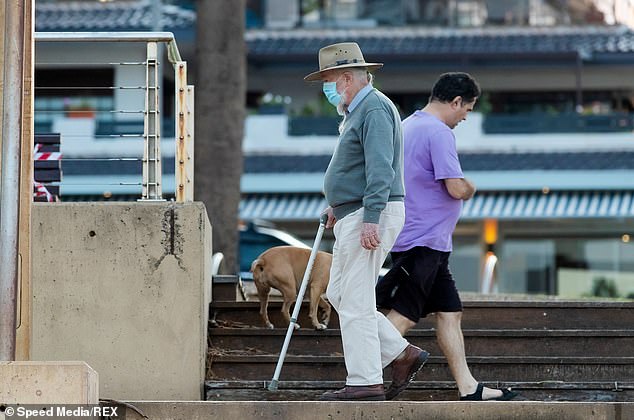 NSW premier Gladys Berejiklian told ABC the situation at Newmarch House was ‘horrific’ and accused the care provider of ‘unacceptable’ management of the home.

‘The Federal Government [has] involved the Aged Care Assurance Advocacy Association to deal with the matter,’ she said.

‘Because what’s happening there isn’t acceptable and unfortunately you do notice a difference in the way people who run these aged care homes across the nation are dealing with the issue.

‘This particular operator has been left wanting on a number of levels.’