Another state puts in a strict limit on returning Australian travellers

South Australia will cap the number of repatriated Australians to be quarantined in local hotels at 1,200.

Police Commissioner Grant Stevens says while SA is working with the rest of the nation to help Aussies come home, the state is mindful of the operational logistics involved.

‘We do have a cap in South Australia in terms of the number of people we can accommodate and we won’t accept flights if we exceed that cap,’ he told reporters on Tuesday.

‘(We’re) looking around a 1,200 person cap but that is subject to if they are individuals or families.’

South Australia will cap the number of repatriated Australians to be quarantined in local hotels at about 1,200 (pictured, police direct travellers to a bus to take them to mandatory isolation after touching down at Adelaide Airport in April)

There are currently 527 people in supervised quarantine in Adelaide.

With international flights redirected out of Victoria as it deals with its COVID-19 outbreak, the SA opposition called for similar limits to those in Western Australia.

WA Premier Mark McGowan urged flights into Perth be limited to one every three days.

A limit has also been introduced in New South Wales with only 50 people on each flight, or 450 a day, permitted to land at Sydney airport.

The limit will be imposed from midnight on Saturday until July 17. However, it could be extended.

The total cost of the mandatory quarantine process was estimated to have reached $118million across the country by the middle of last month. 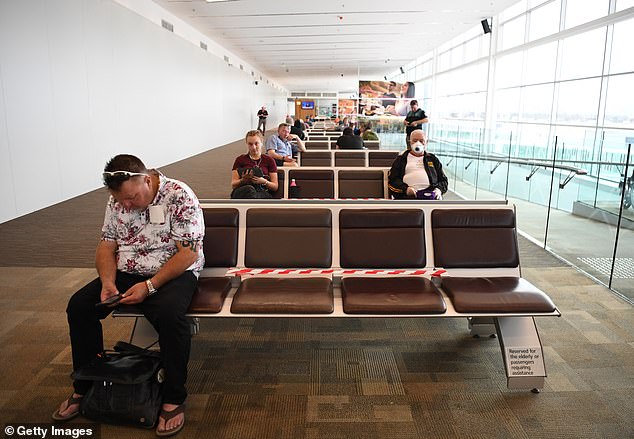 Travellers trying to return to Adelaide airport could be turned away if hotel quarantine facilities exceed 1200 people (pictured, passengers observe social distancing while waiting for a flight at Adelaide airport)

Of that figure, New South Wales had picked up almost half the entire bill – at around $50million in hotel stays for returned travellers.

New South Wales Premier Gladys Berejiklian said it’s time for some of the other states to shoulder the burden.

‘It’s reasonable to say to other states, who’ve been able to live in their bubbles because we’ve borne the burden of these overseas travellers,’ she said.

SA Police Commissioner Grant Stevens said the state did not intend to place any restrictions on the number of flights coming in.

However Health Minister Stephen Wade said the state government had a tried and tested procedure in managing returned passengers safely and would not push it beyond sensible limits.

‘It is common sense that the state government will not be accepting any flights which we could not manage appropriately,’ he said.

‘South Australia has not received one flight of repatriated Australians diverted from Victoria and to suggest there is some risk we will become overwhelmed is bare-faced fear-mongering.’

Opposition health spokesman Chris Picton said SA should not have to ‘pick up the load’ from other states if they chose to cap their numbers. 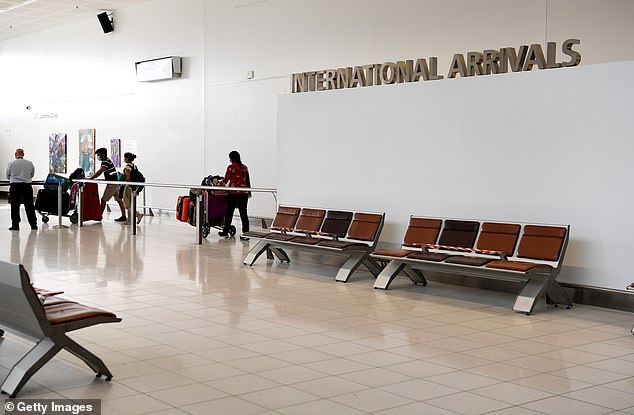 International arrivals will be capped at Adelaide Airport amid fears the state government will have to bear the brunt of the hotel quarantine bill  (pictured, the SA airport in April)

‘To continue to provide hotel quarantine at a high standard and safely, we need to manage the number of arrivals into Adelaide.’

On Tuesday, almost 50 people arrived on a Singapore Airlines flight and were placed in quarantine.

In June more than 250 people arrived from India and about 100 defence force personnel came from Malaysia.

In May about 680 Aussies flew into Adelaide on two separate flights from India.