They have been going from strength to strength ever since striking up their surprising romance earlier this summer.

And Ant Anstead shared a passionate kiss with his new girlfriend Renee Zellweger as the duo hit the beach together on Saturday.

The Wheeler Dealers star, 42, and Renee, 52, packed on plenty of PDA and played with Ant’s one-year-old son Hudson as they enjoyed a day by the waves in Newport Beach, California.

Summer loving! Ant Anstead shared a passionate kiss with his new girlfriend Renee Zellweger as the duo hit the beach together in Newport Beach on Saturday

Ant and Renee did not shy away from expressing their affection for one another as they threw their arms around one another and shared a very fiery kiss.

Ant held the actress tightly in his arms as she flung her arms around his neck.

Renee kept it casual in black leggings, a semi-sheer top, and lavender hat, while her beau showed off his muscles in a black T-shirt and shorts.

In between kisses, the couple lavished attention on Ant’s precious son Hudson. 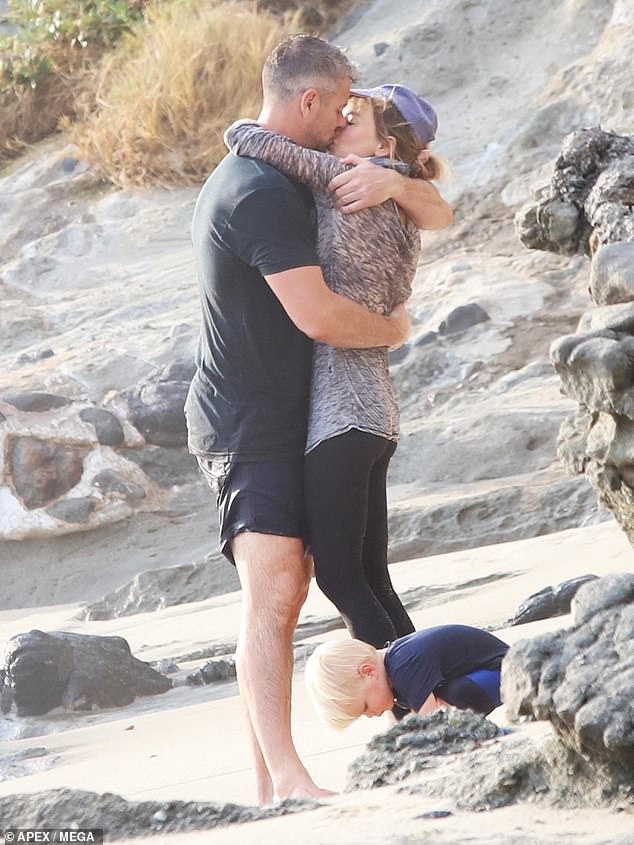 Kiss me! The actress flung her arms around his neck as they locked lips 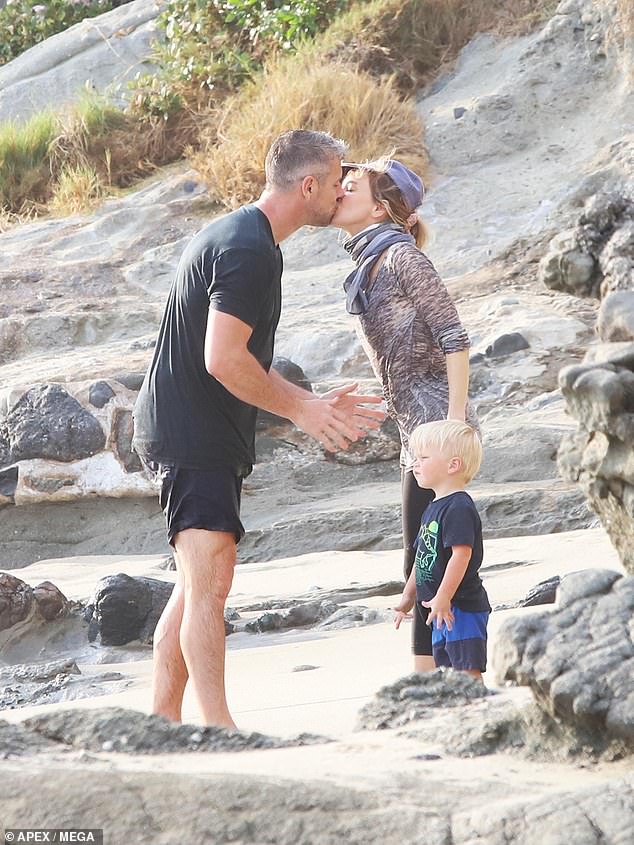 Can’t keep his hands off of her: Anstead reached for his ladylove as the duo shared a smooch 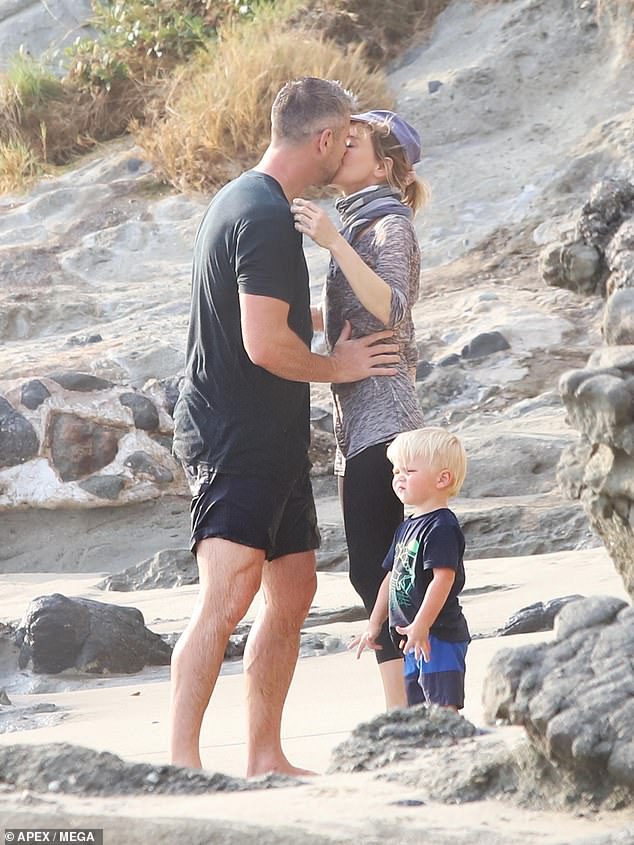 Loved-up: The couple enjoyed a PDA-packed day at the beach

The TV presenter was every inch the doting dad as he carried his bouncing boy in his arms.

Renee even had some fun playing around with the child, as she splashed around in the water with the youngster.

The Bridget Jones Diary star held hands with Hudson as they walked ankle-deep into the cool Pacific water. 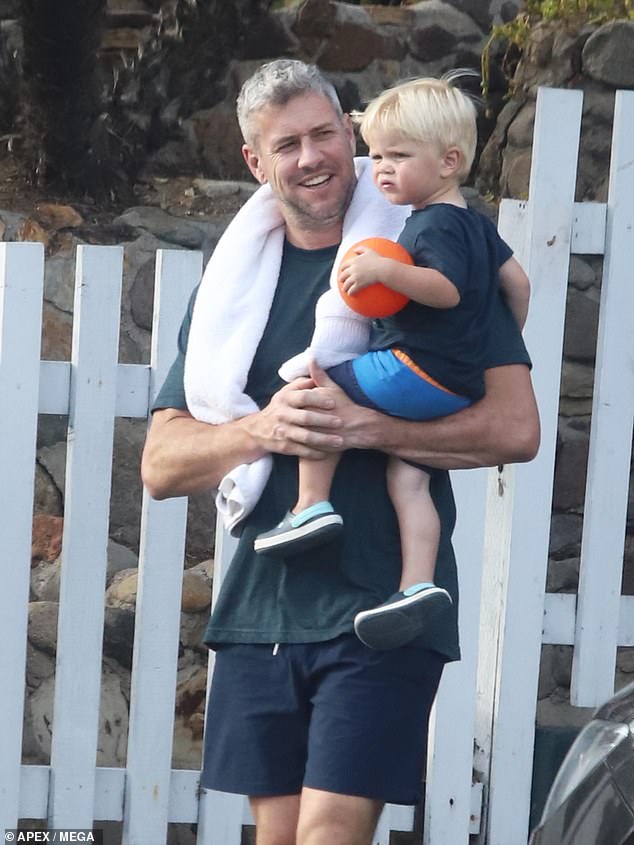 Doting dad! Anstead carried his one-year-old son in his arms 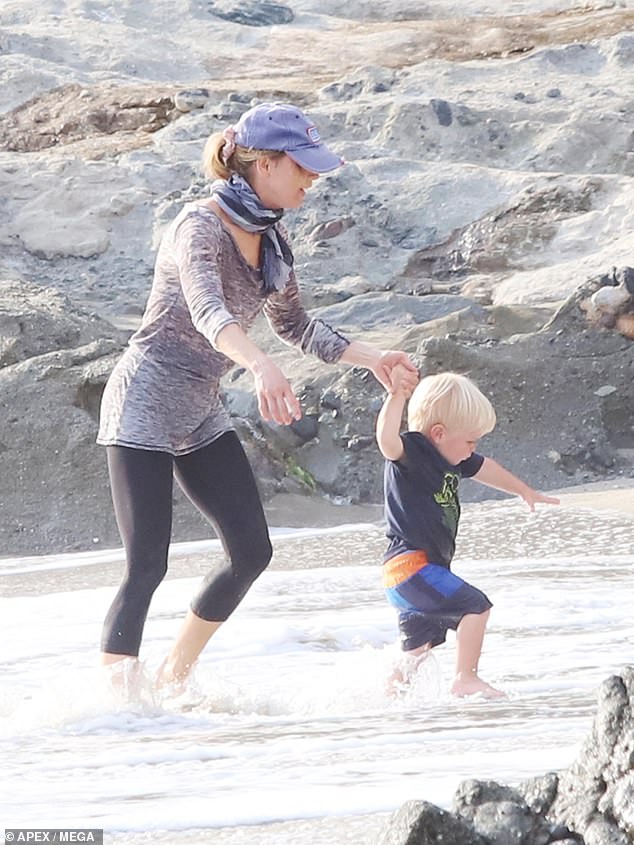 Making a splash! Renee held hands with the youngster as they splashed around in the waves together 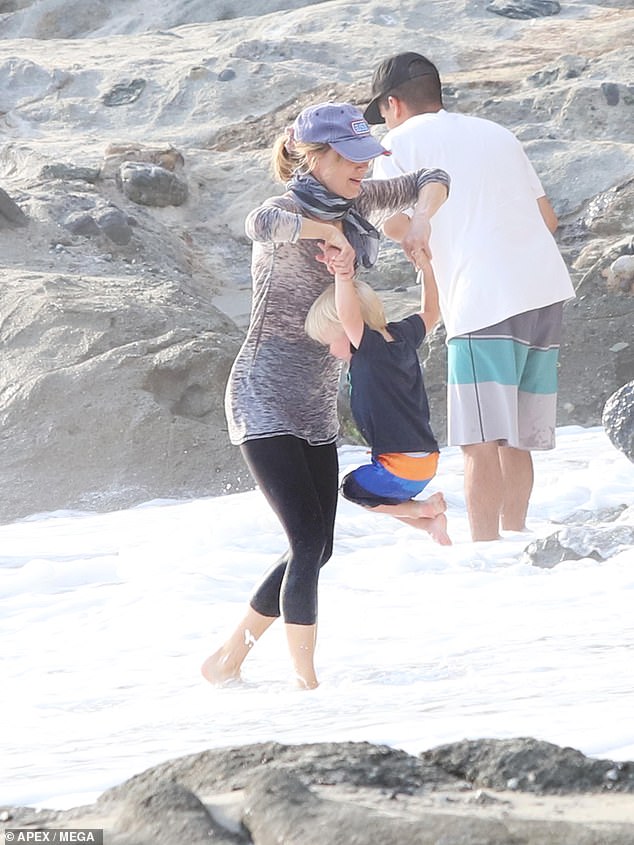 Aww! The actress lifted the child into the air as the waves crashed at their feet

She even playfully lifted the child up into the air as the waves crashed by their feet.

The trio had a blast enjoying some fun in the sun together, as Ant tossed a small ball across the waves towards his lady love.

As evident in the loved up displays, a friend of the actress said that Renee is ‘head over heels’ and has ‘never been happier,’ in a relationship. 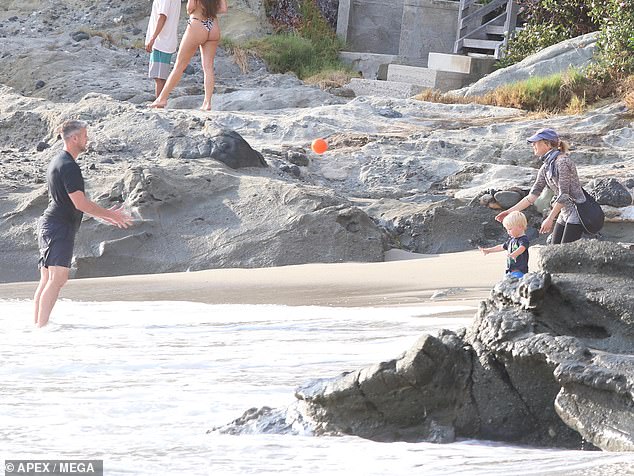 Having a ball! Ant tossed a small ball across the waves and towards his ladylove

Life’s a beach! The trio enjoyed a warm summer day together

‘Renee is head-over-heels in love. She thinks this is the real deal. She’s never been happier. They’re a great couple,’ the insider shared.

In a 2019 Vulture interview — shortly after she had split from boyfriend Doyle Bramhall — she had spoken about pressure as a woman to be in a relationship.

‘If you’re not cherished by someone, if a man doesn’t find you and treasure you, then your worth somehow comes into question. It’s just the reality of being a lady,’ she said at the time. 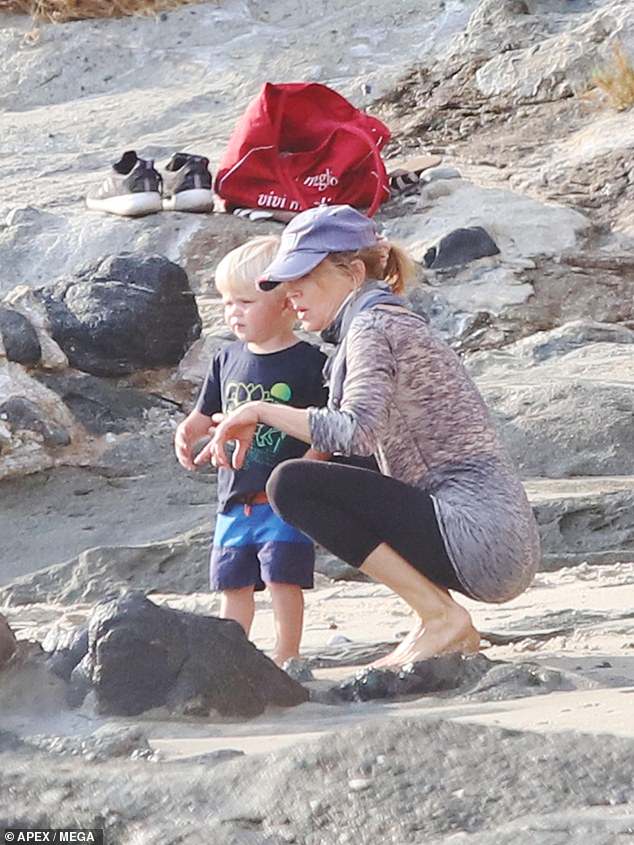 So sweet: Renee crouched down to the floor to chat with the child 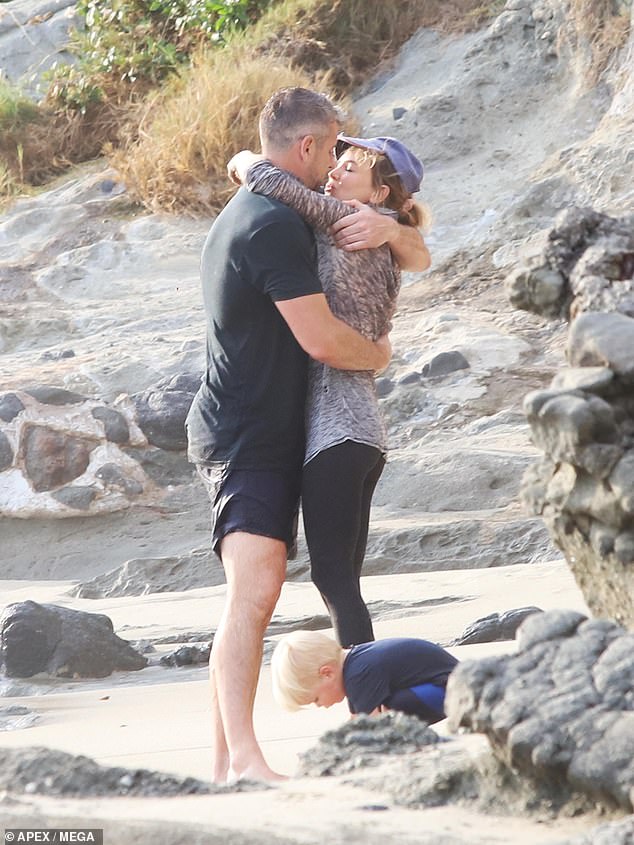 XOXO: As evident in the loved up displays, a friend of the actress said that Renee is ‘head over heels’ and has ‘never been happier,’ in a relationship

She had previously been married to Kenny Chesney in 2005 and had also been linked to Jim Carrey, White Stripes’ Jack White, and Bradley Cooper.

When she and Anstead met a source told PEOPLE that they clicked. ‘Sometimes two people just meet and click, and the timing is right,’ the source said.

‘Renée is creative…and often goes for guys who think out of the box…Both of them are private and dislike public scrutiny, so they have that in common. He’s a creative guy with lots of interests.’ 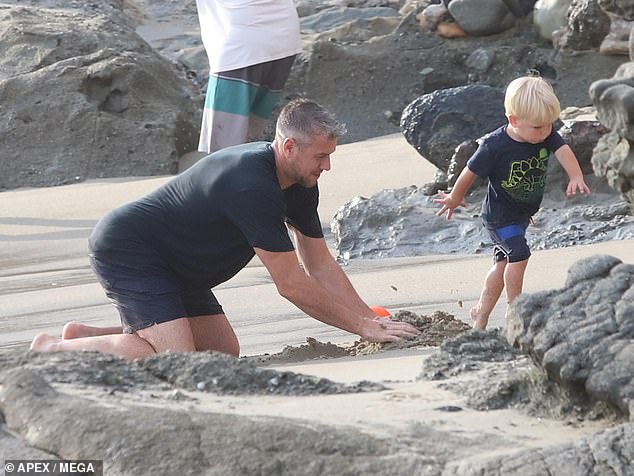 Child’s play: Ant played in the sand beside his son 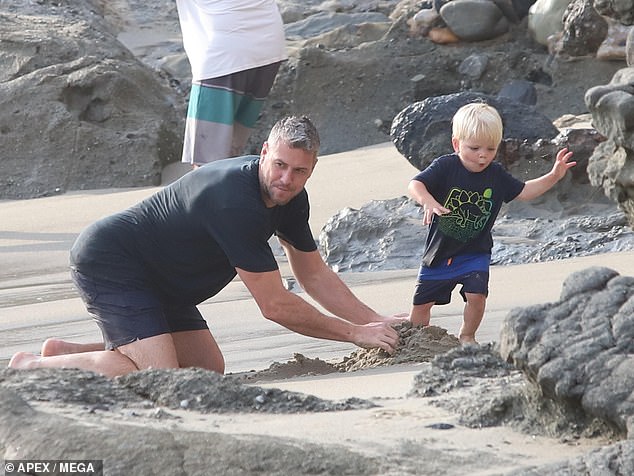 And it seems she may have found her person with Anstead, as an insider told Us Weekly that Ant is also ‘super happy,’ in the relationship.

‘You can tell he’s in a good spot in his life — he’s super happy. He seems like he’s on fire. He’s where he wants to be and is making things happen,’ the source said of both his personal and professional life.

The pair were linked shortly after his divorce from Flip Or Flop host Christina Haack was finalized in June after she announced the split last September.

Ant and Christina will retain joint custody over Hudson together, and she has also moved on to find love with realtor Joshua Hall — who she said she fell in love with after smoking toad venom, which cured her anxiety. 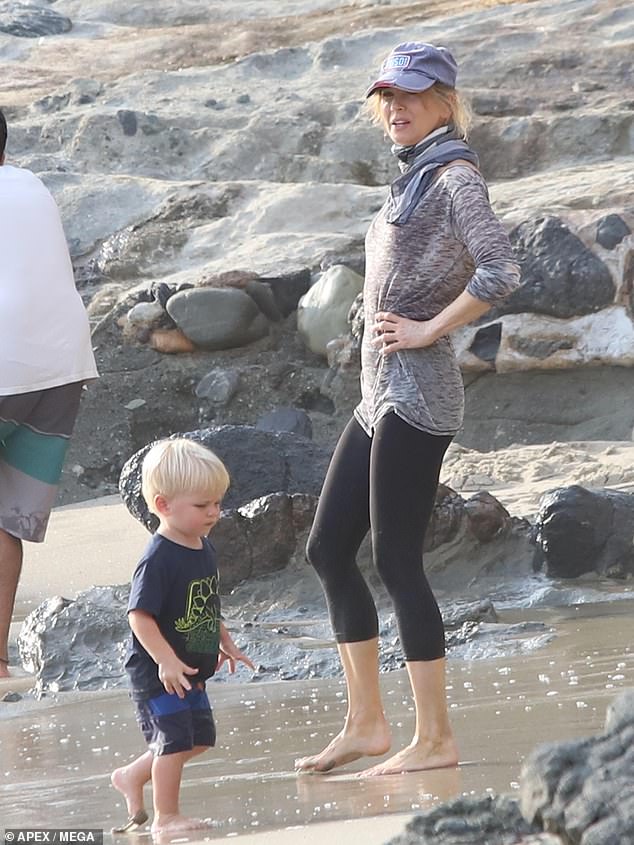 Matters of the heart: Renee was previously married to Kenny Chesney in 2005 and had also been linked to Jim Carrey, White Stripes’ Jack White, and Bradley Cooper