Ant McPartlin is expected to miss one of the most important nights in the show-business calendar tonight following his arrest for drink driving.

The presenter was due to be alongside Britain’s most famous faces at the lavish Royal Television Society (RTS) Awards at Park Lane’s Grosvenor House Hotel this evening.

But as he prepares to go into rehab and waits to hear whether he will be charged over a drink-drive crash, he is expected to stay at home.

Ant and Dec’s Saturday Night Takeaway is nominated in the best Entertainment Programme category, which it won last year.

Ant and Dec at last year’s Royal Television Society Awards. Ant is expected to stay away from this year’s ceremony following his arrest on suspicion of drink driving 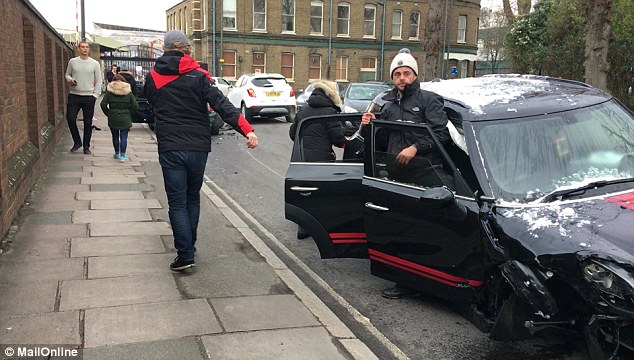 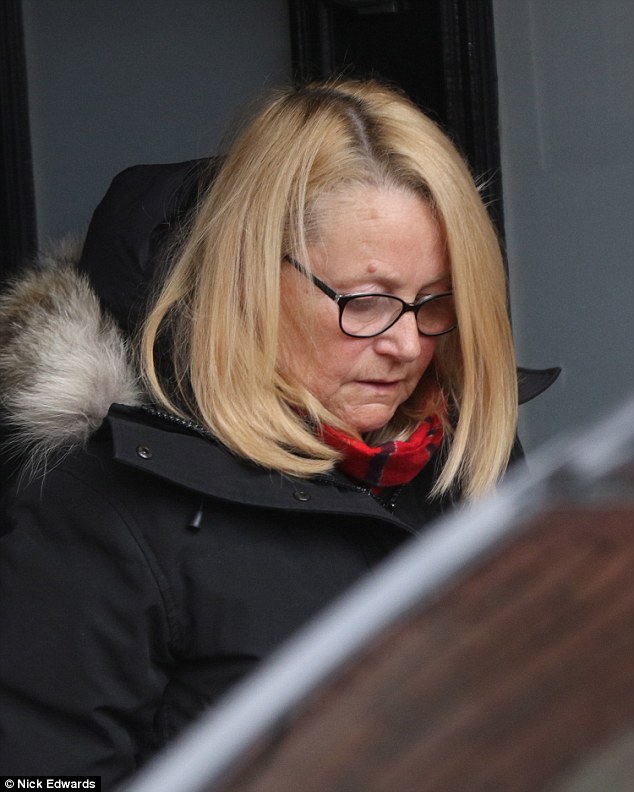 McPartlin, 42, crashed into two cars and failed a breathalyser test on Sunday afternoon.

The broadcaster was unable to confirm when, or if, McPartlin – who spent a stint in rehab last summer for a painkiller addiction – would return to our screens.

The future of his presenting partner Declan Donnelly could also be in jeopardy, as the pair have spent the last 20 years as the double act Ant and Dec.

A statement on behalf of both presenters said: ‘Ant has decided to go back into treatment and step down from his current TV commitments.

‘He has spoken with Dec and ITV today and asked for time off for the foreseeable future. As such ‘Saturday Night Takeaway’ will not be going ahead this Saturday.’

ITV later announced that it would be considering its options regarding how to broadcast the remaining episodes of Saturday Night Takeaway, leaving open the possibility of Donnelly presenting alone. 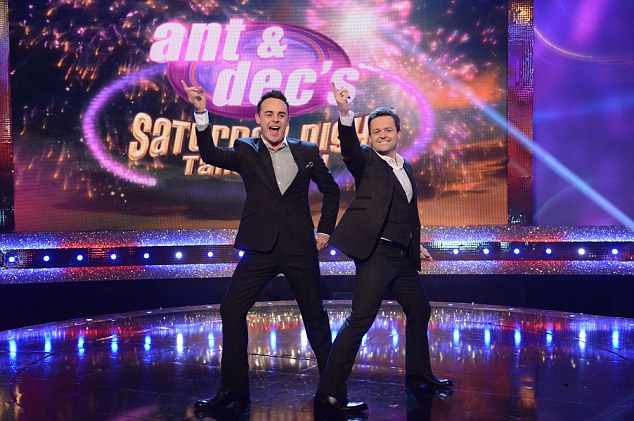 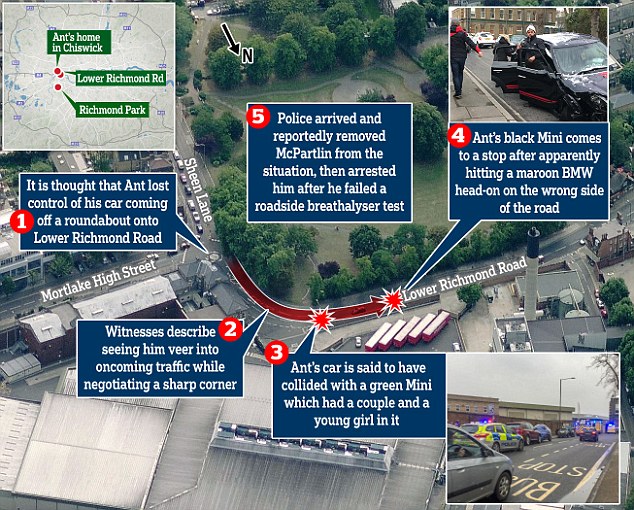 The broadcaster said it ‘very much’ hopes that McPartlin, who is estimated to be worth £60million, receives the ‘help he needs’.

McPartlin was driving with his mother, Christine, on Sunday afternoon in Richmond when he lost control of his Mini and careered into two cars.

The Met Police said passengers were treated at the scene for ‘minor injuries’, and a child, believed to be a three-year-old girl, was taken to hospital for a check-up.

Witnesses claimed McPartlin became ‘agitated and argumentative’ with a police officer, before he was arrested and taken to a south London police station for questioning.

He spent most of the night in custody and was ‘released under investigation’ yesterday, as inquiries continue.

It is understood McPartlin, who recently split from his wife, Lisa Armstrong, held crisis talks with his management team, Donnelly and ITV yesterday.

As co-presenter of I’m A Celebrity…Get Me Out of Here, Britain’s Got Talent and Saturday Night Takeaway, the former Byker Grove actor is one of ITV’s biggest stars. 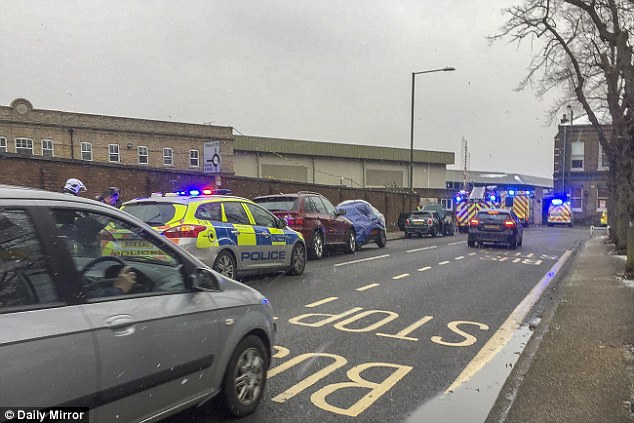 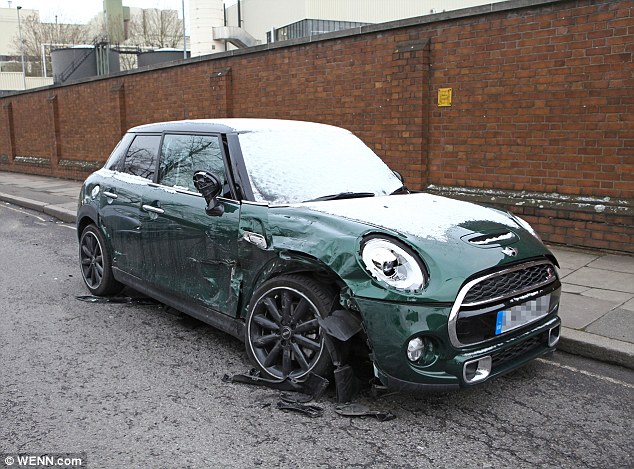 The green Mini (pictured yesterday), in which the couple and their daughter were travelling is pictured by the roadside following the collision with the TV star

He and Donnelly joined the broadcaster in 1998, presenting Saturday morning shows SM:tv Live with Cat Deeley and CD:UK. In 2001 they signed their first exclusive contract with ITV, and have since gone on to become stalwarts of the Saturday night schedule.

In 2016, they reportedly signed a three-year ‘golden handcuffs’ deal, which was rumoured to be worth £30million and was due to expire at the end of next year.

However, McPartlin has had a string of personal setbacks over the last year, including entering rehab last year after struggling with an addiction to prescription painkillers following a knee operation in 2015. 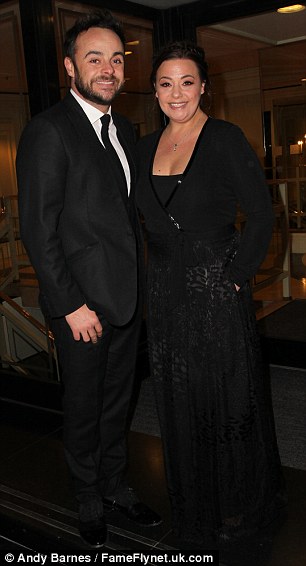 He returned to TV work in November for I’m A Celebrity… Get Me Out Of Here! and jokingly mentioned his rehab stint along with his TV partner.

In January, McPartlin confirmed that he and his wife Lisa were separating after 11 years of marriage.

Nevertheless, later that month he picked up his seventeenth consecutive best presenter award, alongside Donnelly, at the National Television Awards, suggesting he was back to full force.

This latest setback is the most damaging to his career, and ITV faces a major decision over whether to permit him to return to presenting at all.

It comes just a week after Sky Sports pundit Jamie Carragher was suspended from his presenting role for the rest of the football season, after he was filmed spitting in the direction of a 14-year-old girl through his car window.

An ITV spokesman said: ‘ITV has taken a joint decision with Ant and Dec’s team not to broadcast Saturday Night Takeaway this weekend.

‘We will be reviewing options for the last two episodes of the series (March 31 and April 7) which would not feature Ant, who is taking time off to seek treatment.

‘We very much hope that he gets the help that he needs.’

Yesterday, Miss Armstrong said she was ‘not interested’ in her estranged husband’s decision to step down from Ant and Dec’s Saturday Night Takeaway.

Asked whether she would discuss the incident, the make-up artist – who was speaking through the intercom of the four-bedroom house in Chiswick, west London, that she used to share with McPartlin – she said: ‘I’m sorry I’m not interested.’