Antarctic ice core could give glimpse of Earth’s history

Researchers may have found a million-year-old glimpse into the past with the potential discovery of the world’s oldest undisturbed Antarctic ice core.

Ice cores can give a glimpse into the history of the world’s climate. Layers of ice show past temperatures, and gases trapped in bubbles reveal past atmospheric composition.

But as new research from the Universities of Washington and Maine shows, an even older continuous core may exist deep within the Allan Hills Blue Ice Area in East Antarctica, and could contain a complete climate record of the area from the past million years.

The location been rejected long ago in the search for an old ice core because ice flowing over the steep topography at the base seemed likely to be disturbed.

Now, the UW researchers believe one-million-year-old ice may be about three miles from where the samples were found.

They set up a remote camp 6,400 feet above sea level and used snow machines with ice-penetrating radar to map the layers of ice below.

The computer model of glacier flow with the data suggests that million-year-old ice is about 100 feet above the bedrock. 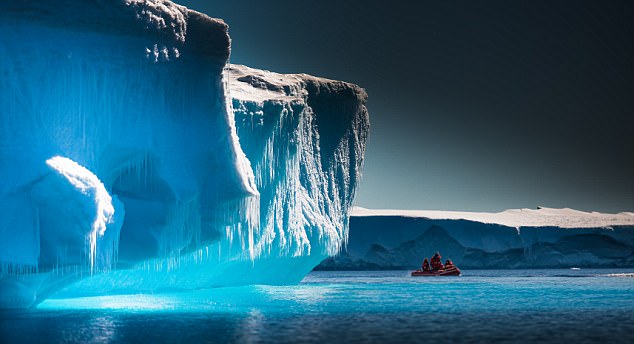 The research team believes a continuous core may exist deep within the Allan Hills Blue Ice Area in East Antarctica. In these blue ice areas, the ice record is tipped on its side, so older, deeper layers are driven upwards while wind pulls away younger snow and ice

WHAT DID THE 2.7-MILLION-YEAR-OLD ICE CORE REVEAL?

Researchers announced that an ice core drilled in Antarctica is 2.7-million-years-old – 1.7-million years older than the former record holding core.

The ice core was obtained by a Princeton University led team in the Allan Hills, a windy region of East Antarctica near the McMurdon Station, which is also famous for preserving ancient meteorites.

The bubbles in the ice core contain greenhouse gases from the Earth’s atmosphere at the time, when patterns of glacial advance and retreat were only beginning.

Based on this information, they have submitted a proposal to the National Science Foundation to drill the core.

‘A primary reason to seek such old ice is to understand one of the major puzzles of climate system history,’ said second author Howard Conway, a UW research professor of Earth and space sciences and UW’s principal investigator of the project.

They hope to learn why about a million years ago, Earth switched from having ice age cycles every 41,000 years to every 100,000 years.

Scientists know from past climate records that switch occurred, but do not yet know why.