Anthony Albanese is facing anger and criticism from his left flank after he opened up huge swathes of Australian waters for gas and oil exploration and visited Murdoch media bosses.

Despite campaigning to take action on climate change, and just days after passing a 43 per cent emissions reduction target through the House of Representatives, Mr Albanese released 47,000 square kilometres for fossil fuel drilling last Wednesday.

Global gas prices have soared this year in the wake of sanctions on Russian energy exports following Putin’s invasion of Ukraine.

Mr Albanese, who is riding high in the polls and marks 100 days in power on Monday, backed the move by saying fossil fuels will be important for years to come and flippantly telling journalists ‘you came here by car’ to prove his point.

The Greens, teal independents and even some of his own supporters on social media slammed the decision, with some calling the way he justified it ‘insulting’.

Writer and environmental activist Sean Doherty, who supported Mr Albanese during the election campaign, wrote a scathing Instagram post on Sunday blasting the decision and saying Mr Albanese had had a ‘sh*t week’.

‘Very disappointed that the climate wars are far from over. Talked a big game at the election, and then this week turned around and handed the gas gronks 46,000 sq km of new offshore exploration acreage to play with,’ he wrote. 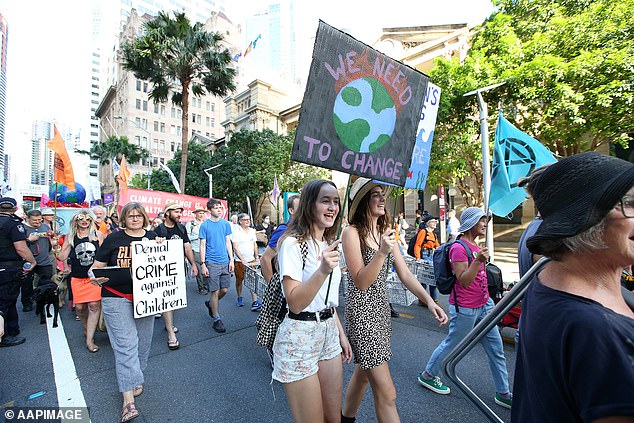 Protesters march in Brisbane to call for action on climate change 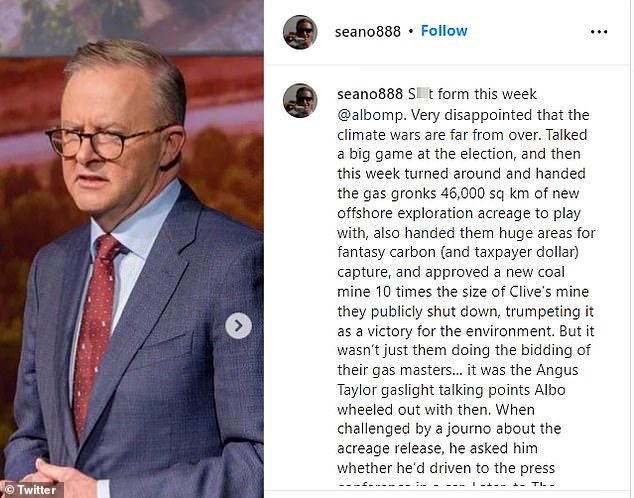 Writer and environmental activist Sean Doherty, who supported Mr Albanese during the election campaign, wrote a scathing Instagram post (above)

‘But it wasn’t just them doing the bidding of their gas masters… it was the Angus Taylor gaslight talking points Albo wheeled out with then,’ he wrote

‘When challenged by a journo about the acreage release, he asked him whether he’d driven to the press conference in a car.’

Journalist and activist Rachel Withers slammed Mr Albanese for trying ‘to pretend anyone proposing weaning our society off fossil fuels is demanding that we go cold turkey’, and said this type of argument was more ‘insulting’ when it came from ‘the new Labor PM, Ender of the Climate Wars’.

The Murdoch press has not backed Labor at an election since Kevin Rudd and has notoriously adopted a hostile stance to climate change action.

‘To cap the week off he snuck up to Holt Street for a secret meeting with the Murdochs. Now, what could that be about?? I’d like [to] think this was all part of a long game, but sadly it seems more about the fossil fuel industry’s long game than his,’ Doherty wrote.

The release of Commonwealth offshore waters comprises 10 areas across the Bonaparte, Browse, Carnarvon, and Gippsland basins off the coasts of the Northern Territory, Western Australia, Victoria, and the Ashmore and Cartier Islands.

Greens leader Adam Bandt blasted the move and said the decision flew in the face of the government’s recent climate change laws, which enshrine a 43 per cent emissions reduction target by 2030.

‘The ink isn’t even dry on the climate legislation and the government is already undoing it,’ he told ABC Radio on Friday. 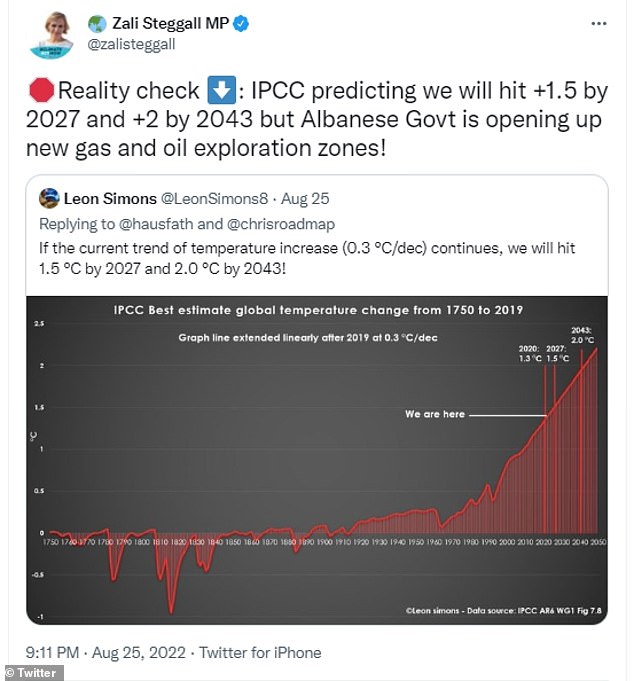 Teal independents also voiced their opposition, with Zali Steggall (above) saying the move ‘throws fuel on the fire of climate change’

‘This is a move that will take us further away from a safe climate and one we will push to stop.’

Teal independents also voiced their opposition, with Zali Steggall saying the move ‘throws fuel on the fire of climate change’.

Debate on the climate legislation is set to resume in the Senate when federal parliament sits in September.

While the government struck a deal with the Greens to get the legislation through the upper house, Mr Bandt said the party would continue to call for a moratorium on new coal and gas projects.

Despite infuriating the Greens and climate activists on his left flank, Mr Albanese is riding high in the polls with a Resolve Political Monitor poll last Tuesday showing Labor has lifted its primary vote to 42 per cent, from about 33 per cent ahead of the May 21 election.

The Coalition’s primary vote is down to 28 per cent from 36 per cent.