Secretary of State Antony Blinken has admitted that a civil war or Taliban takeover in Afghanistan is ‘certainly a possible scenario’ when the US withdraws all its troops from the country by September 11.

Blinken told CNN’s Jake Tapper Tuesday the Biden administration is ‘planning for every scenario’ that could arise from the move.

But he insisted the US is ‘not disengaging from Afghanistan’ and will continue to be ‘deeply engaged’ in supporting the country long after troops have left.

Joe Biden announced earlier this month that the US will withdraw all troops from Afghanistan by September 11 2021 – the 20 year anniversary of Al-Qaeda’s terrorist attacks, which prompted then-President George W Bush to invade the Central Asian country shortly afterwards.

Bush ordered the invasion – named Operation Enduring Freedom – in a bid to flush out 9/11 mastermind Osama Bin Laden and other key Al Qaeda terrorists believed to have plotted the outrage, which murdered 2,977 Americans.

After coming to office, President Biden vowed that it was ‘time to end America’s longest war’ and the State Department started ordering home most remaining staff at the US embassy in Kabul this week.

But the decision has divided opinion with some officials and lawmakers voicing concerns that pulling troops too quickly could lead to retaliation from the Taliban.

Democratic Senator Jeanne Shaheen of New Hampshire, who is on the Foreign Relations Committee, told CNN ‘it’s difficult to see a scenario that doesn’t end in civil war or a Taliban takeover.’

Blinken addressed these concerns Tuesday, admitting that unrest is a possible consequence.

‘That is certainly a possible scenario,’ he said.

‘Now no one has an interest in renewed civil war in Afghanistan, certainly the Afghan people don’t.’

He urged what he described as ‘free riders’ in the region to start using their ‘influence’ to help keep the country stable.

‘I don’t think ultimately either the Afghan government or the Taliban do, none of Afghanistan’s neighbors do, neighbors and other countries in the region that have basically been free riders for the last 20 years, as we’ve been engaged there with our NATO allies and partners who are now going to have to decide, given their interests in a relatively stable Afghanistan, given the influence that they have, whether they’re going to try to use that influence in a way that keeps things within the 40-yard line,’ he said.

Secretary of State Antony Blinken on the US withdrawing military from Afghanistan: “We are not disengaging from Afghanistan. We’re remaining deeply engaged in the diplomacy… development, economic assistance, humanitarian assistance, support for the security forces.” pic.twitter.com/9PaCoEwMFg 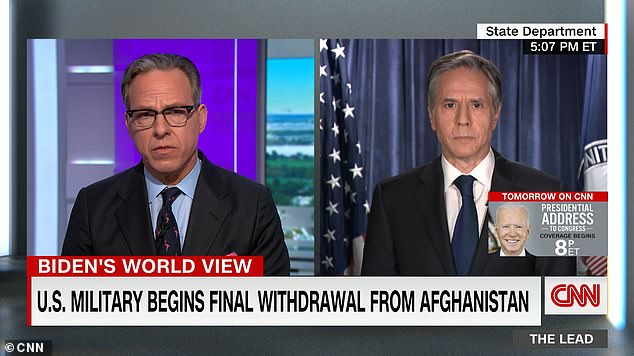 Blinken denied that the withdrawal of troops was the US ‘disengaging’ from the country, saying the nation continues to be committed to ‘its people, development, economic assistance humanitarian assistance, support for the security forces.’

‘So a lot of people are having their minds concentrated by the president’s decision and besides that – even as we are withdrawing our forces, we are not disengaging from Afghanistan.

‘We have trained over the years more than 300,000 of them so all to that remains and there are different actors are work now who I hope will keep moving this in a more positive than negative direction.’

He added: ‘But we have to plan we are planning for every scenario.’

Blinken also insisted that the Biden administration is working to ensure Afghan locals who ‘put their lives on the line’ working with US forces and diplomats in the country over the last two decades can apply to be expedited to the US.

Thousands of people worked alongside the US on the ground in the country and have been left fearful for their lives once the US withdraws. 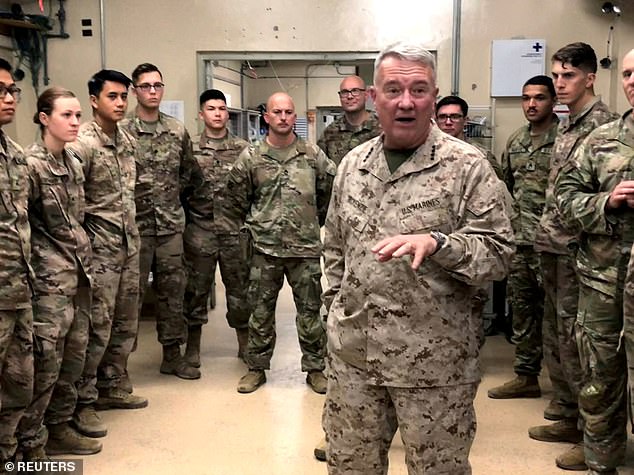 US troops including Marine General Kenneth McKenzie at the Forward Operating Base Fenty in Jalalabad, Afghanistan, in 2019 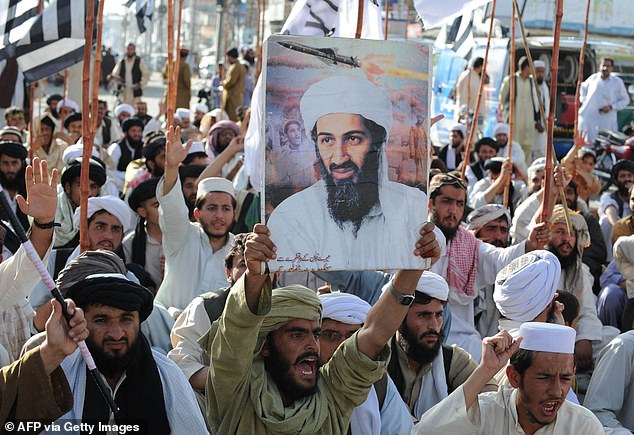 Taliban supporters in 2011 holding an image of 9/11 mastermind Osama Bin Laden. There are concerns that pulling troops too quickly could lead to Taliban retaliation

‘We have had this program in Iraq and also in Afghanistan and we want to make sure that people who put their lives on the line, working with American folks in uniform, working with our diplomats who put, not just themselves in jeopardy, potentially their families as well, can get expedited consideration if they decide that they want to try to come to the United States,’ he said.

‘We have got about 18,000 people already in the pipeline, 9,000 of whom are relatively far along, another 9,000 are just at the beginning of the process, and you know, clearly more are likely to sign up, so we are working very hard to make sure that we’ve got in place the resources to work that program – to work it quickly, expeditiously.’

Blinken called on the lawmakers in the House and the Senate to ‘work together and   make sure that the program has the resources it needs.’

US Special Representative for Afghanistan Reconciliation Zalmay Khalilzad said on Tuesday he hoped many Afghans will want to stay to ‘contribute to the nation’s future’ but said it was crucial the US protects those who feel they need to leave the nation.

‘Failing to do so ‘sends a global message – ‘Don’t fight with the Americans, because when they’re finished they leave you behind.’ That’s not something we can tolerate,’ he said. 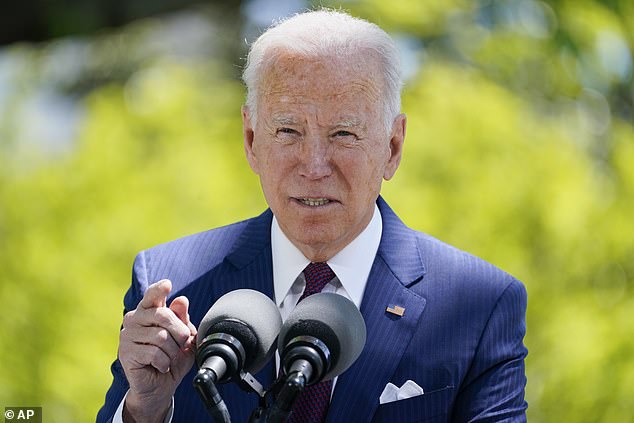 Many cited concerns that the Taliban will take over the county again after troops are pulled out.

The same day, the State Department ordered employees at the US embassy in Kabul to leave Afghanistan unless their jobs require them to be physically located there or ‘whose functions can be performed elsewhere.’

Guidance from State also says American citizens should not travel to Afghanistan and those already there ‘should leave as soon as possible on available commercial flights.’

He asserted Afghanistan’s security forces had to be ready to take over after a full withdrawal. 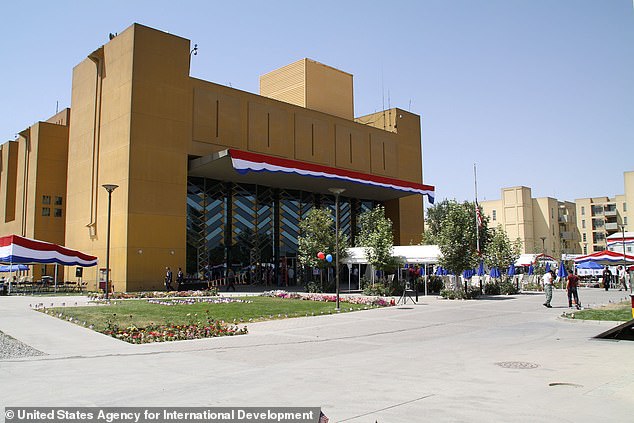 The State Department ordered most remaining staff at the U.S. embassy in Kabul leave Afghanistan after threats from the Taliban ramped up

Biden announced earlier this month that troops would begin pulling out by May 1 and be fully out by the 20th anniversary of the 9/11 terrorist attacks.

Around 2,500 US troops are still in the country.

The decision seemed to fly against the advice of the Pentagon’s top brass and some of the president’s closest advisers.

And politicians on both sides of the Atlantic have also warned that Biden’s plan to withdraw risks creating a power vacuum which the Taliban is already seeking to fill.

However the timeline is later than the May 1 deadline Donald Trump agreed upon.

The Taliban has threatened the US and NATO with consequences if the military withdrawal is not completed by this earlier date.