Los Angeles Lakers All-NBA center Anthony Davis has exited the game against the Cleveland Cavaliers and won’t return due to flu-like symptoms.

Davis, who has impressed with his terrific winning play recently, left the court towards the end of the first quarter.

The center was seen heading straight to the locker room and was later ruled out for the remainder of the game, according to The Athletic’s Shams Charania.

His incredible scoring run will now come to an end as he exited the game having scored just one point, three rebounds and one assist in 8:07.

When he left the court, the Lakers were trailing 19-13 and were behind by eight points at halftime.

The Lakers’ backup center Thomas Bryant started the second half in place of Davis and Los Angeles went on to suffer a 116-102 defeat to the Cavaliers.

David had led the Lakers to victory over the Washington Wizards on Sunday night after he scored 55 points on sizzling 22-of-30 shooting and added 17 rebounds. 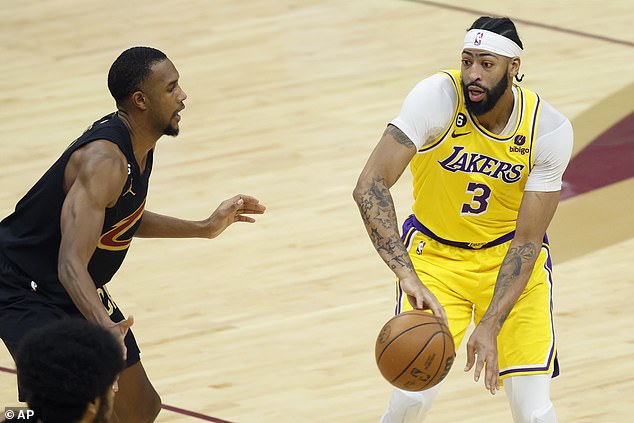 After scoring 44 points against Milwaukee in his previous game, Davis came close to his career-high of 59 against Detroit in 2016. He’s averaging 35.3 points in his last nine games.

‘Coming off a huge win in Milwaukee, can’t get complacent, get comfortable,’ Davis said.

Davis was 2 of 3 on 3-pointers and made all nine of his foul shots. He scored 31 points in the second half.

‘Our team is locked in right now,’ Davis said. ‘Very focused on both sides of the ball. Overall, we’re just trying to make up ground.’