Anthony Hamilton’s stunning rendition of the Star Spangled Banner at the NBA All-Star game draws comparisons with Marvin Gaye…but is it his guitarists side-eye at his improvised ending that really steals the show?

Singer Anthony Hamilton performed a stirring rendition of the Star Spangled Banner at the NBA All-Star Game, but it’s his bass guitarist that’s getting all the attention.

The soul singer, flanked by an acoustic guitarist and a bassist, put a slowed-down spin on the national anthem while performing it before Sunday night’s game started.

Hamilton’s chilled-out rendition of the song was well-received by both game attendees and viewers at home — in stark contrast to Fergie’s up-and-down version at the 2018 All-Star Game — leading to favorable comparisons to Marvin Gaye’s beloved singing of the anthem during 1983’s NBA All-Star Game. 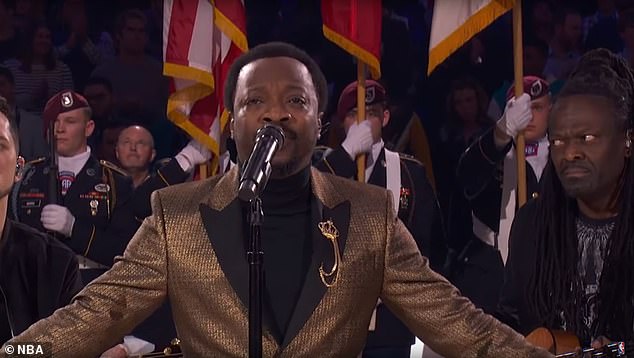 Social media users were tickled by the last four seconds of the performance, when Hamilton’s bassist appeared to give his final note improvisation a tremendous side-eye

While most praised Hamilton’s performance, eagle-eyed social media users, however, caught one person that didn’t appear to be quite so taken with Hamilton’s version of the song.

Although the bassist is clearly jamming along and feeling the tune, he appears to get a little thrown right at the end of the song where it seems like Hamilton might’ve engaged in a little unexpected improv.

As Hamilton belts out the last note, the bassist can clearly be seen furrowing his eyebrows and engaging in a noticeable side-eye — a four-second moment in time that went viral almost immediately.

‘Anthony Hamilton is singing the anthem but dude on the guitar behind him is stealing the show,’ Twitter user @Simply_Cv wrote. 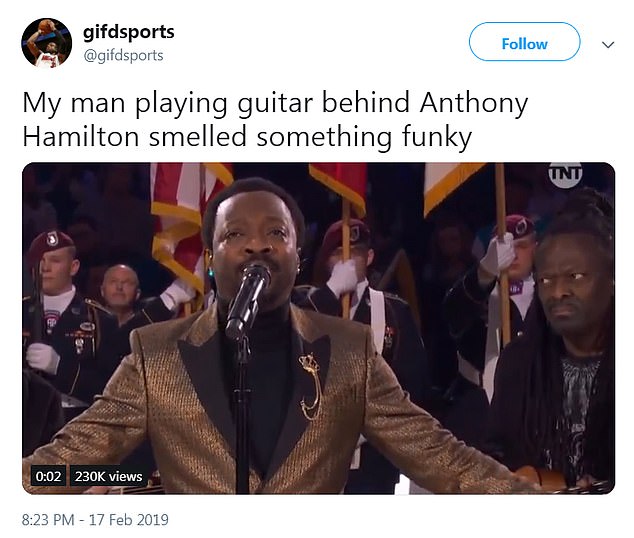 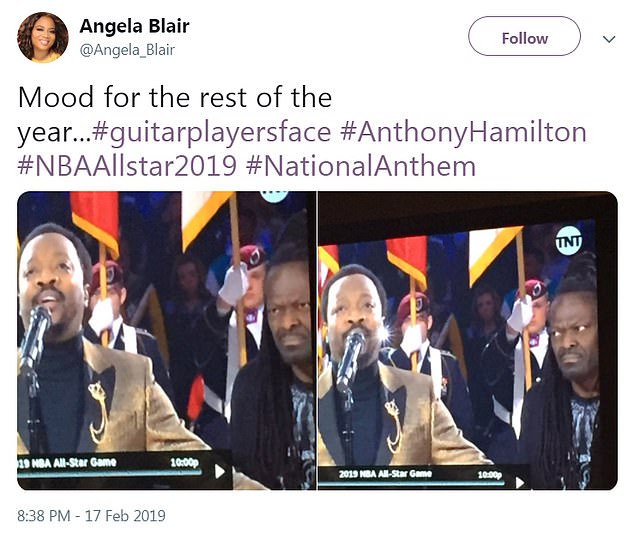 ‘My man playing guitar behind Anthony Hamilton smelled something funky,’ @gifdsports tweeted out Sunday night, accompanied by the side-eye clip, which has been viewed 234,000 times already.

‘Lmao Anthony Hamilton must of farted Look at the guitarist reaction he deserves MVP for the All-Star game,’ @shanshan888888 joked.

‘Anthony Hamilton’s guitar player was not pleased with the improv at the end of the song,’ @quaysea tweeted, also accompanying his tweet with a clip of the side-eye — viewed 75,000 times — that is destined to become a well-used meme.

As if to prove this will be true, tweeter @Angela_Blair accompanied screenshots of the bassist’s furrowed brow and side-eye with the caption, ‘Mood for the rest of the year.’