The scales tipped in favour of Britain’s world heavyweight champion as Anthony Joshua and Joseph Parker weighed in for their title unifier in Cardiff – with both the unbeaten champions coming in significantly lighter than for their preceding fights.

Joshua, at 17 st 4lbs, was down almost 12 lbs from when he beat Carlos Takam last autumn while Parker, coming in at 16 st 12 lbs, has shed almost 9 lbs since defeating Hughie Fury.

Joshua looked magnificent and says he feels it: ‘Taking that bit of weight off makes this fight a little easier.’ 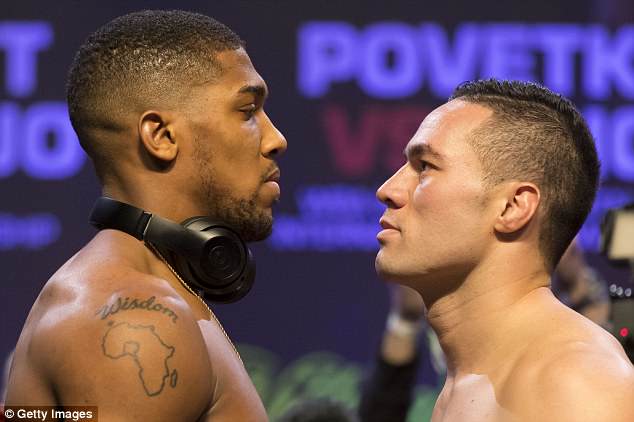 Joseph Parker was almost half a stone lighter than the WBA, IBF and IBO world champion 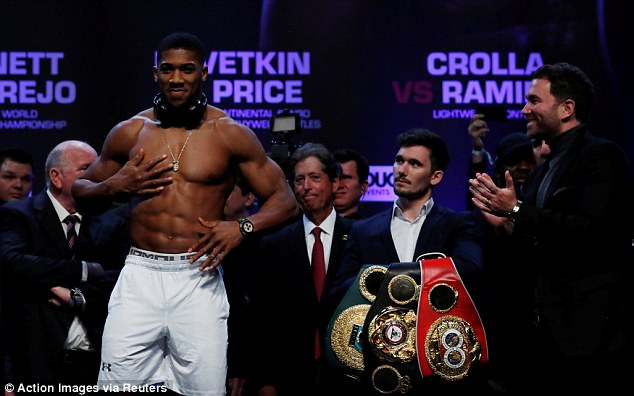 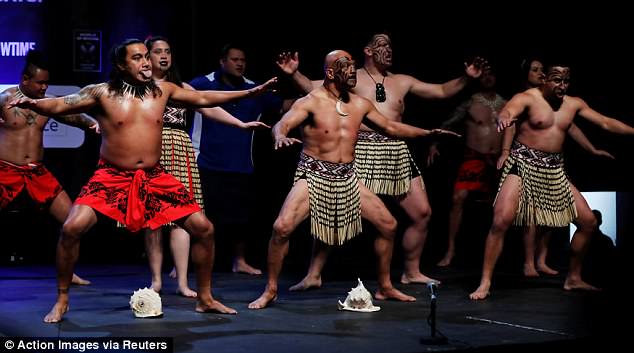 Parker was accompanied by New Zealand Haka dancers and Samoan singers. Joshua marched in to a Guards band leading the crowd in ‘Oh, Anthony Joshua.’ The fascination with Joshua keeps growing.

No fewer than 215 countries around the world are taking live TV transmission of the fight, led by Sky in Britain and Showtime in the US.

In Cardiff almost 4,000 paid £1 a head to watch the weigh-in, with the proceeds going to a fund for Craig Westgarth, the latest British boxer to die from brain damage. 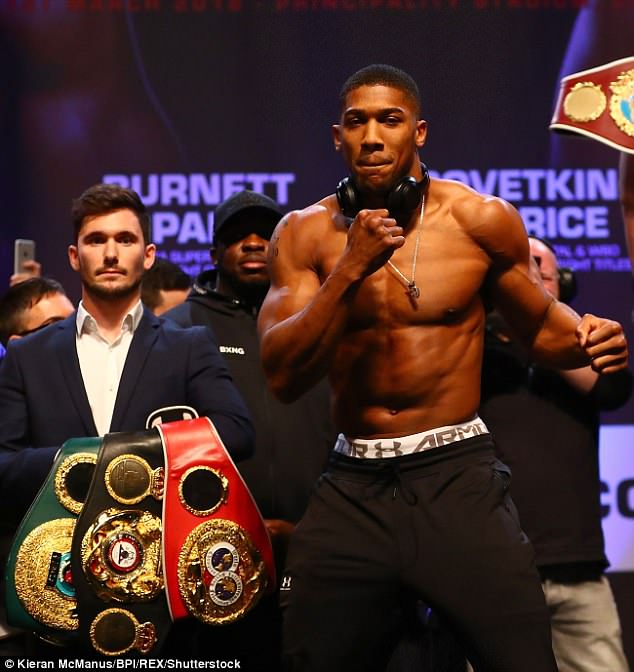 After successfully weighing-in and taking part in the ceremonial final stare down with Parker before he meets him in the ring on Saturday, the opportunity to as Joshua puts it ‘to create history’ seem to hit home.

‘When I go back years ago and watch boxing you see fighters drop to their knees crying when they win world titles and I have never really done that,’ Joshua said.

‘But I think this will be a real emotional time as we are creating history. If I secure this win we are on to make history late 2018.’

The undefeated WBO champion Parker stands his way with the same goal of taking a huge step towards becoming the undisputed champion of boxing’s grandest division by winning on Saturday.

Despite being the overwhelming favourite, Joshua is wise enough to respect Parker and praised him for coming into the fight in ‘good’ condition like a true champion.

The 28-year-old, who has won all his 20 professional contests by knock out, refused to make a final prediction but promised that there ‘will be blood’.

Nothing more can be done now. On Saturday, there will be one unified heavyweight champion, either hailing from Britain or from New Zealand.