Anti-communist protesters have gathered outside of the Chinese consulate in Houston to jeer its ejected staffers as the U.S. takes control of the alleged spying hub, while China orders the American consulate in Chengdu to close in an escalating tit-for-tat.

About 100 Chinese activists gathered at the consulate in Houston on Friday, shouting slogans denouncing communism and heckling staff as they abandoned the diplomatic mission ahead of a 4pm deadline imposed by the Trump administration.

Some held American flags as they watched workers loading belongings from the five-story building into trucks.

Protesters cheered when a tractor trailer circled the building with giant signs that read: ‘Freedom from Communism,’ and ‘God Bless America.’

Protesters gathered outside of the Chinese consulate in Houston to jeer China’s diplomats as they were forced to abandon the facility by the Trump administration. Above, the protesters are seen with Trump flags and South Vietnam’s former flag 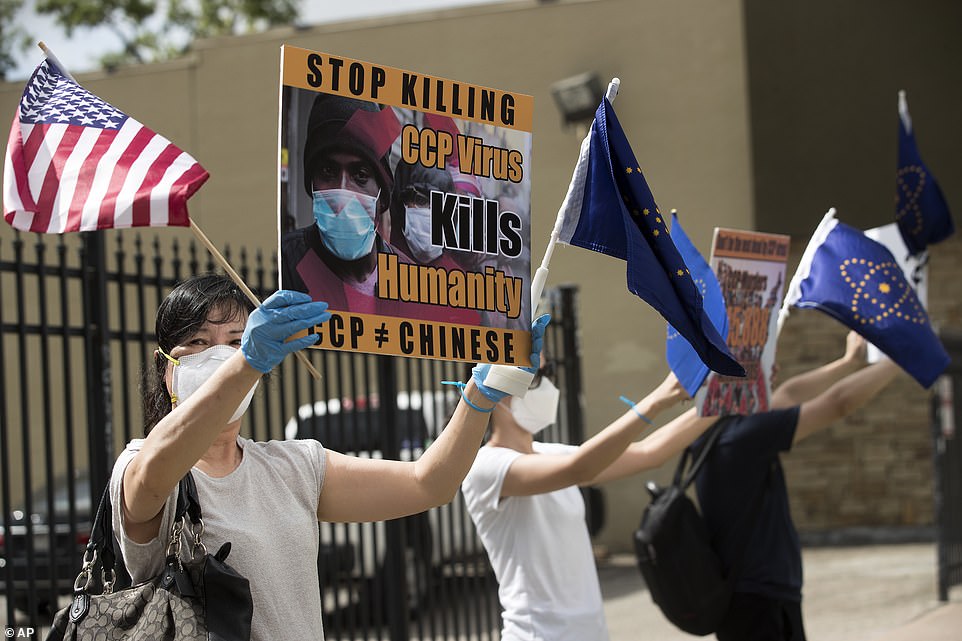 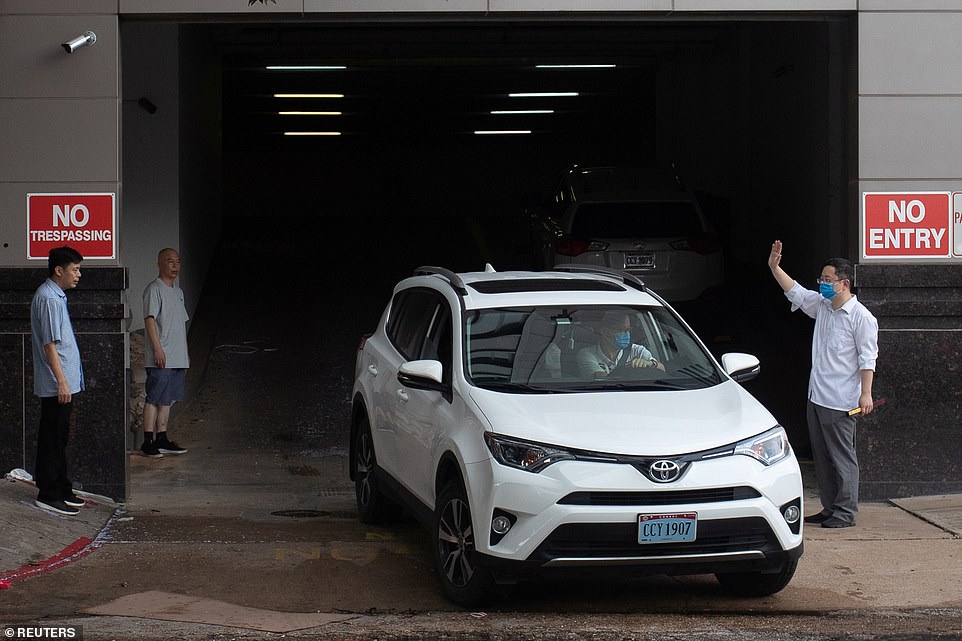 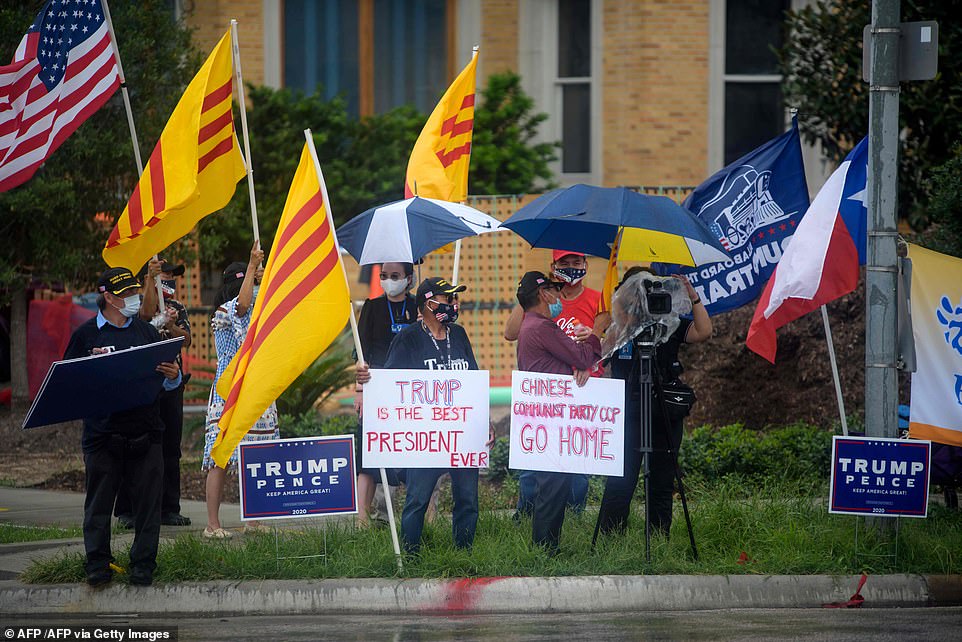 Protesters hold up signs and flags outside of the Chinese consulate in Houston on Friday after the US State Department ordered China to close it. China called it a ‘political provocation’ that will further harm diplomatic relations 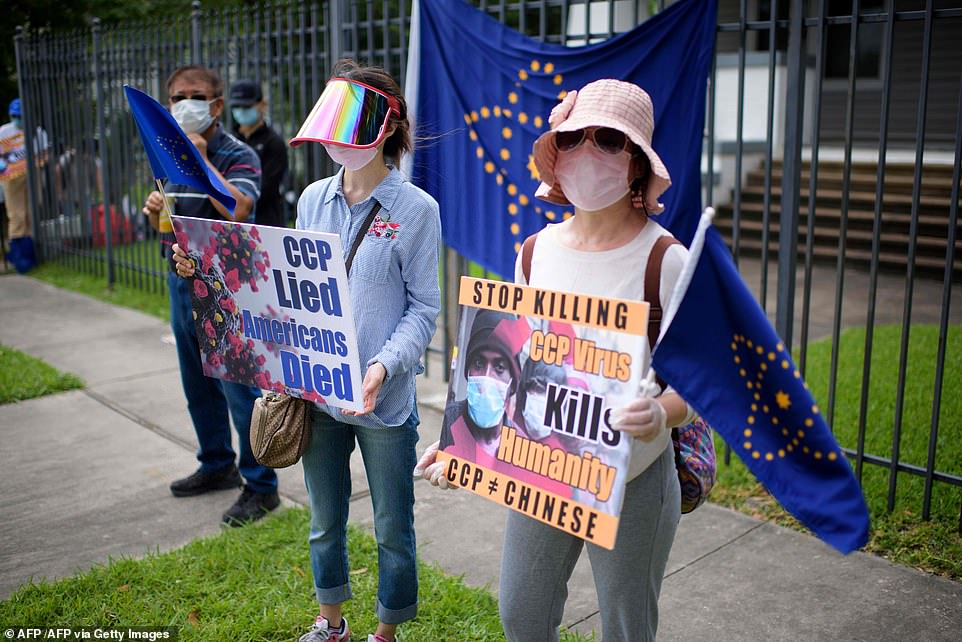 The US ordered China to close its Houston consulate, where protesters gathered on Friday to heckle the Chinese diplomats

Soon after the deadline passed, U.S. officials breached the abandoned facility and took control, using hammers and pry bars to gain entry to the building, where days ago Chinese staffers were seen frantically burning documents in a courtyard before departing.

According to a witness, Chinese consulate staff had exited the building shortly after 4pm and left in vehicles. The back door was then forced open.

Chinese authorities have called on Washington to reverse its decision, and said the closure of the diplomatic office was ‘breaking down the friendship bridge.’

The consulate in Houston was a well-known center of Chinese spying, U.S. officials told NBC News. 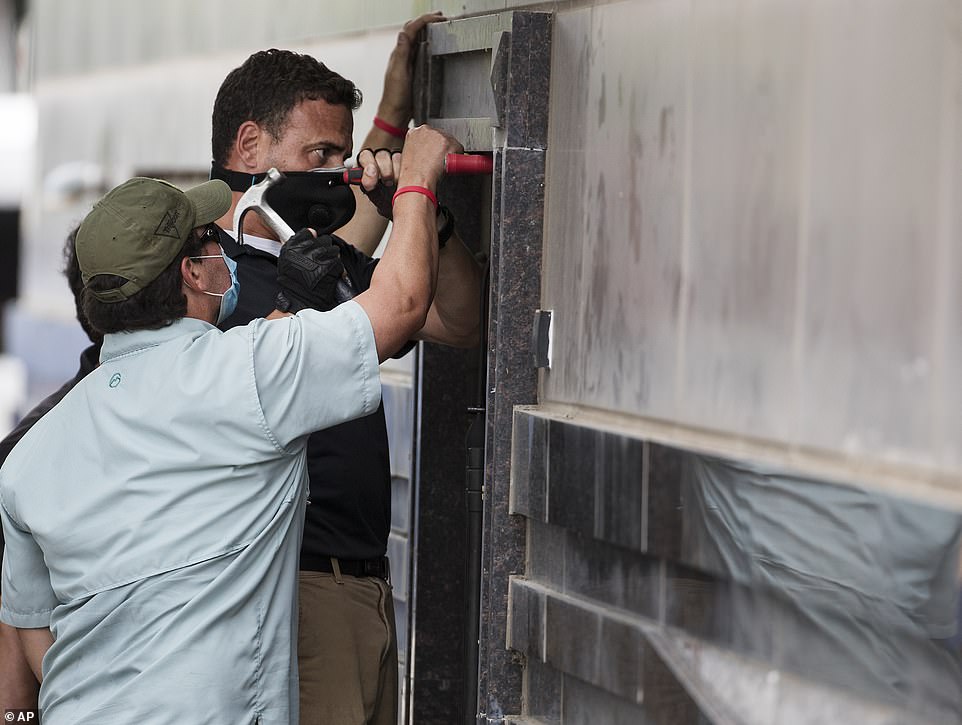 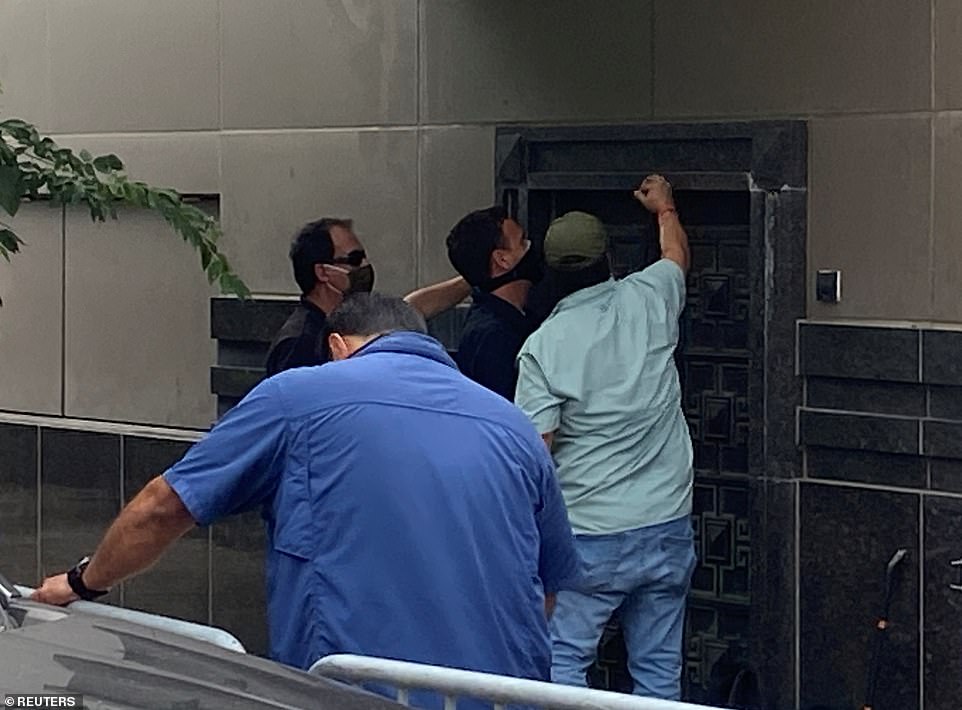 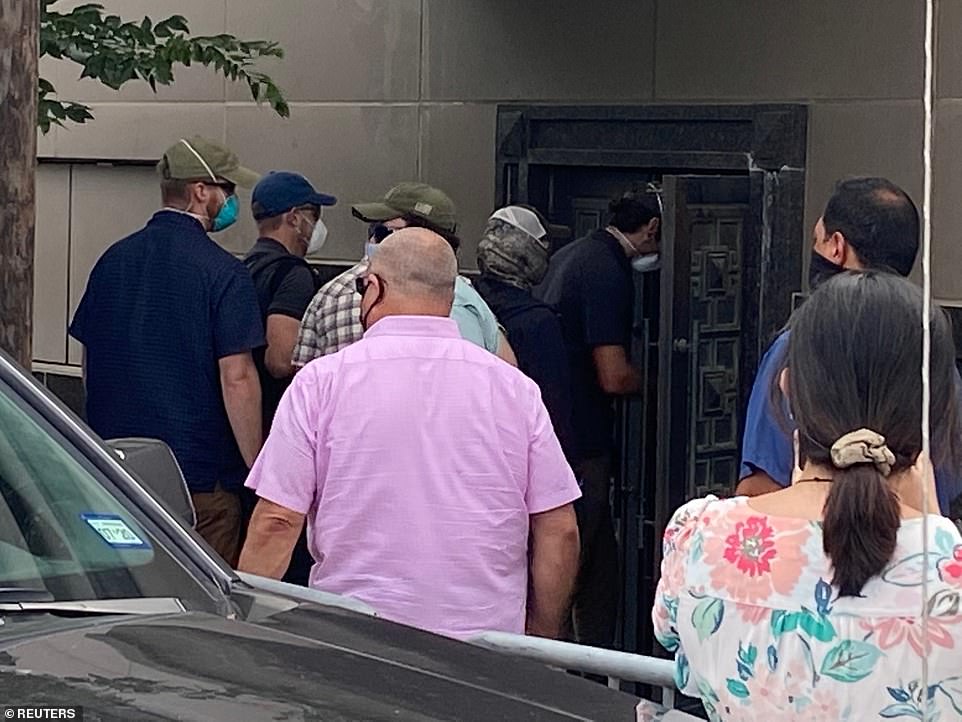 The team did not confirm their identity when asked by reporters on the scene, but are thought to be US officials inspecting 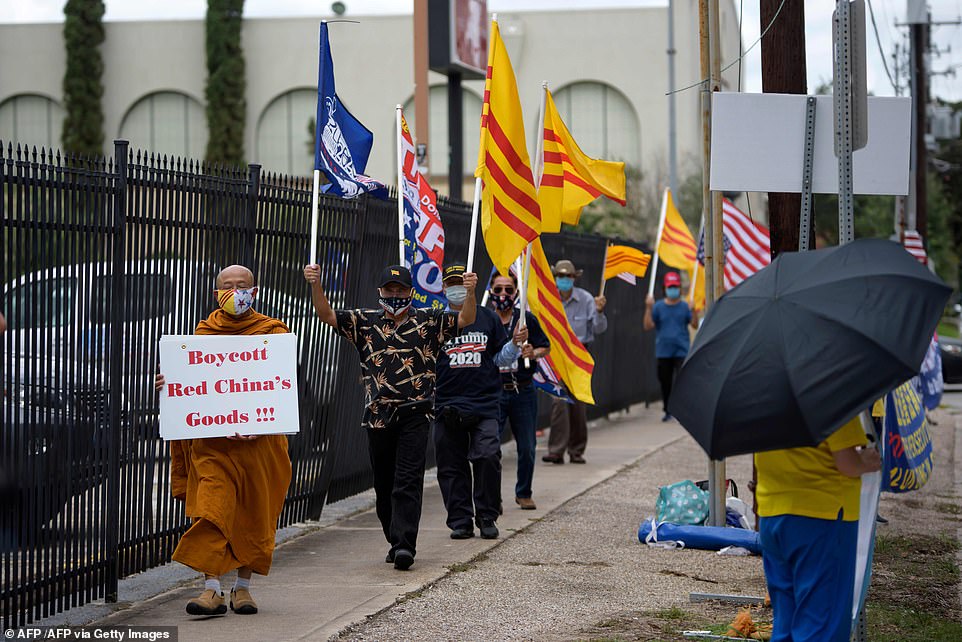 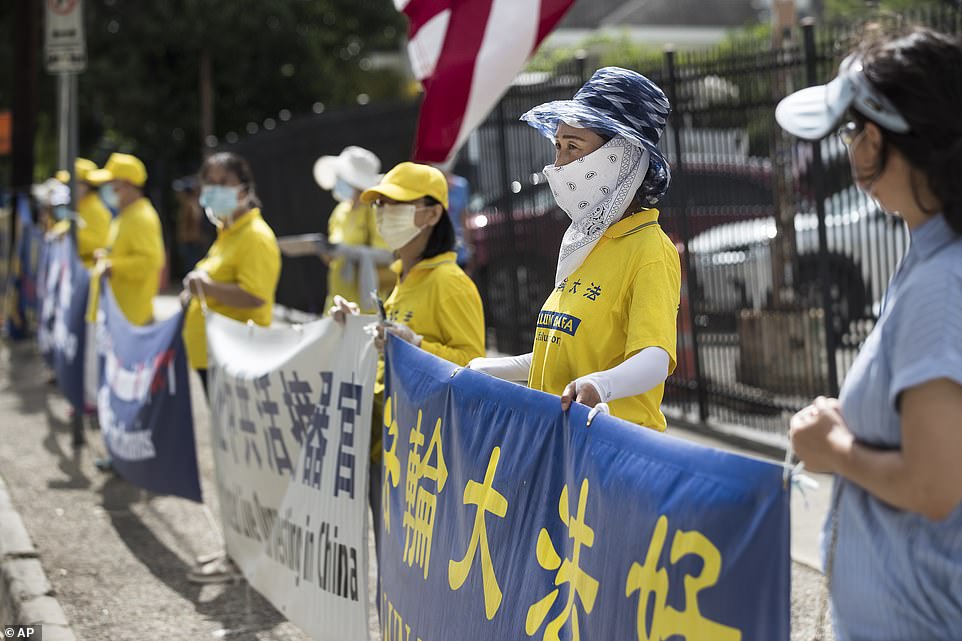 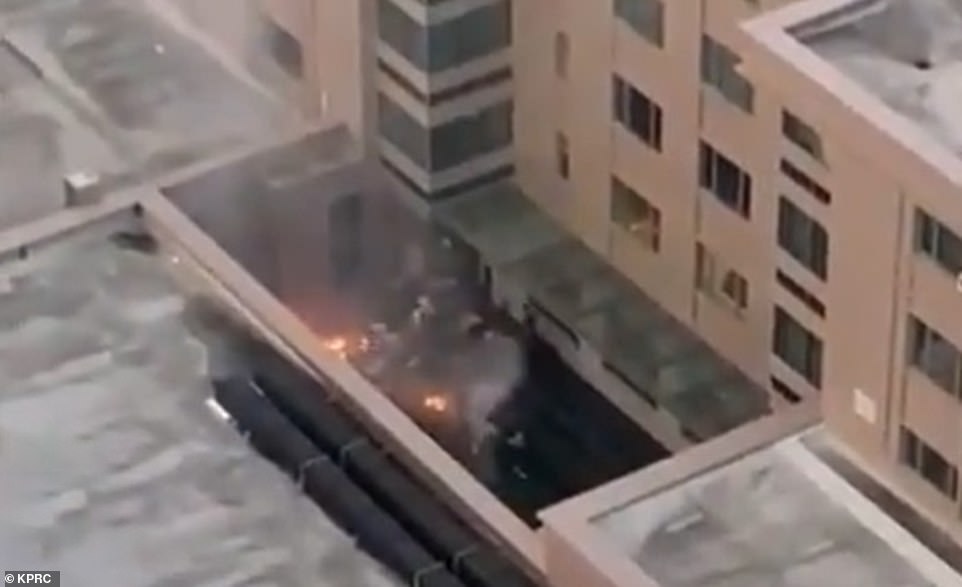 The Chinese consulate in Houston was one of five in the U.S., not counting the embassy in Washington DC.

The U.S. has an embassy in Beijing and consulates in Shanghai, Guangzhou, Chengdu, Shenyang, Wuhan and Hong Kong.

On Saturday, security was tight outside the U.S. consulate in the Chinese city of Chengdu as staff inside prepared to leave, a day after China ordered it to close in response to a U.S. order for China to shut its consulate in Houston.

The tit-for-tat consulate closures have brought a sharp deterioration in relations between the world’s two largest economies.

A consulate emblem inside the compound was removed as staff could be seen pushing trolleys and several consulate vehicles came and went.

Police, including many plain clothes officers, gathered outside and closed off the street to traffic.

Neither the consulate in the southwestern Chinese city nor the U.S. embassy in Beijing have responded to requests for comment on the closure. 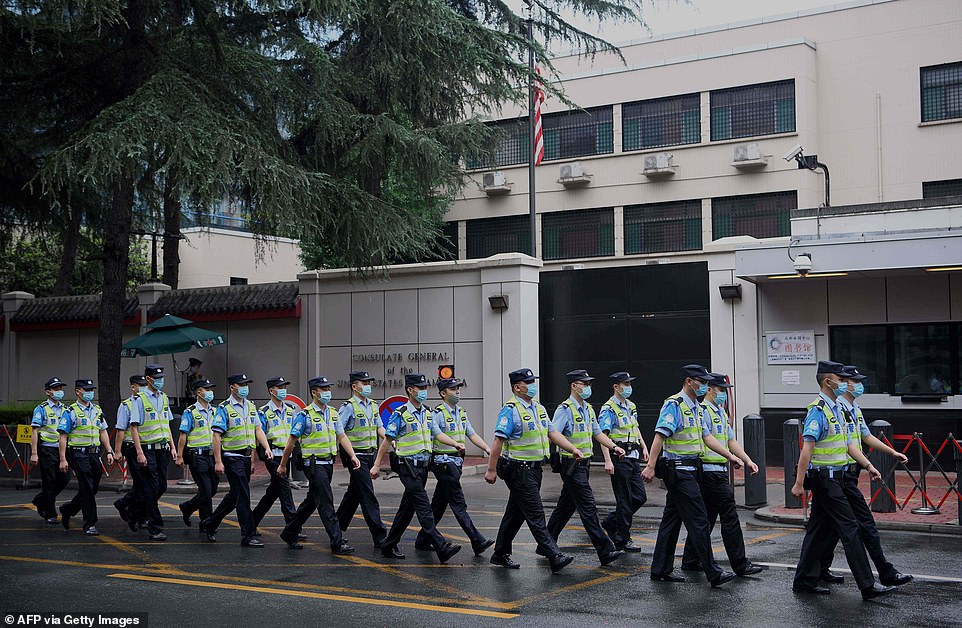 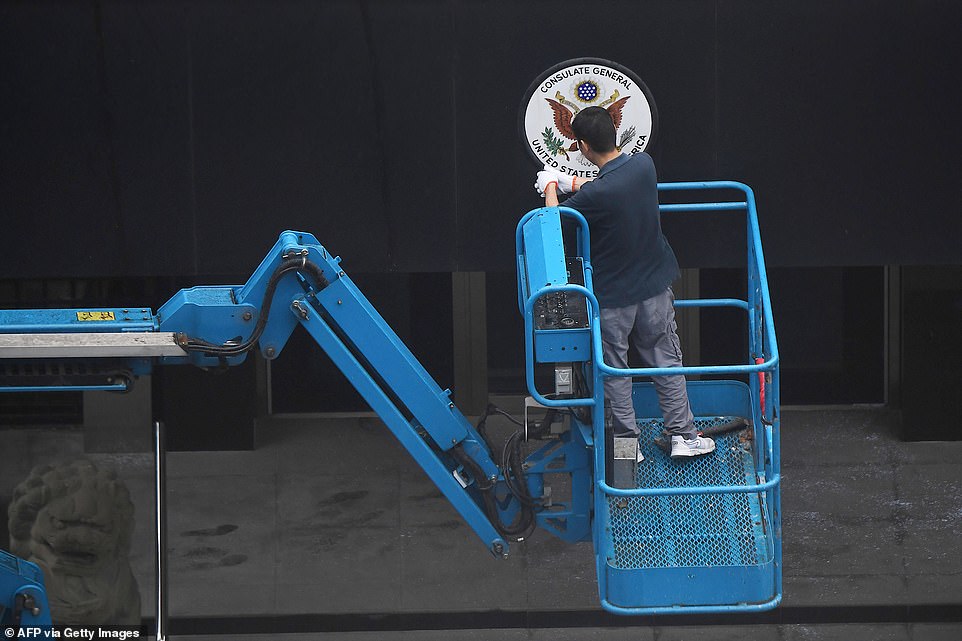 A worker removes the sign at the entrance to the US consulate in Chengdu, in Sichuan province on Saturday 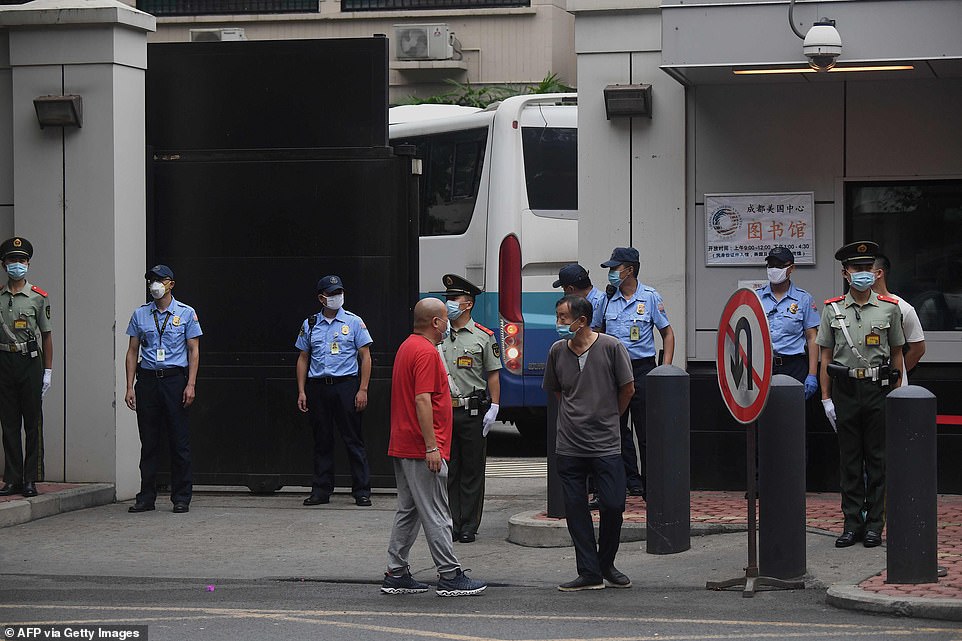 Chinese police form a cordon around the US consulate in Chengdu as a bus is seen entering the compound. US diplomats were given a deadline of 10am on Monday to vacate the diplomatic mission in Chengdu 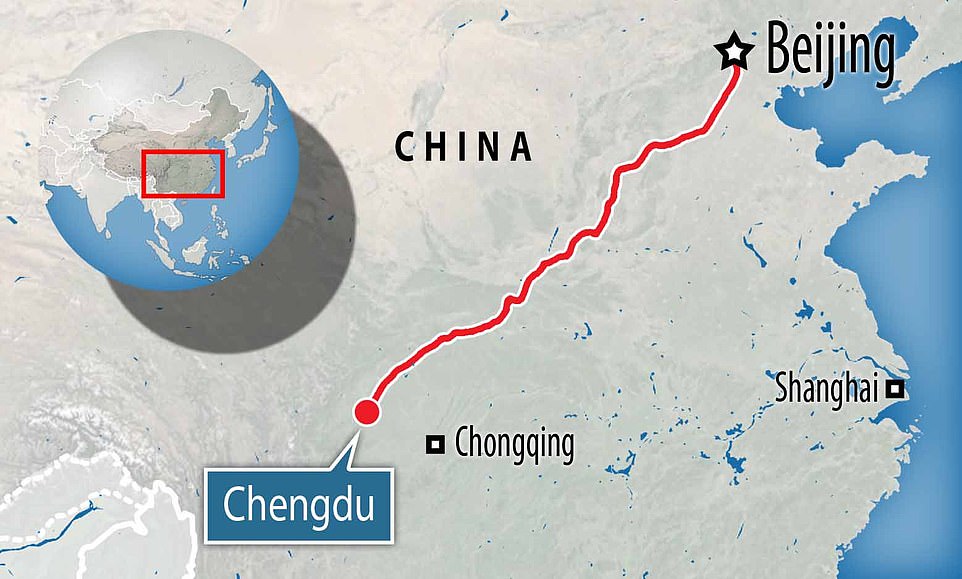 The Chinese order to close it was retaliation after the Trump administration gave China until 4 p.m. last Friday to vacate its consulate in the Texas city.

U.S. Secretary of State Mike Pompeo said the consulate had been ‘a hub of spying and intellectual property theft’.

The U.S. consulate in Chengdu was also given 72 hours to close, or until 10am on Monday, the editor of China’s Global Times tabloid said on Twitter.

The consulate opened in 1985 and has almost 200 employees, including about 150 locally hired staff, according to its website. It was not immediately clear how many are there now after U.S. diplomats were evacuated from China because of the pandemic.

A steady stream of people walked along the street opposite the entrance throughout the day, many stopping to take photos or videos before police moved them on. 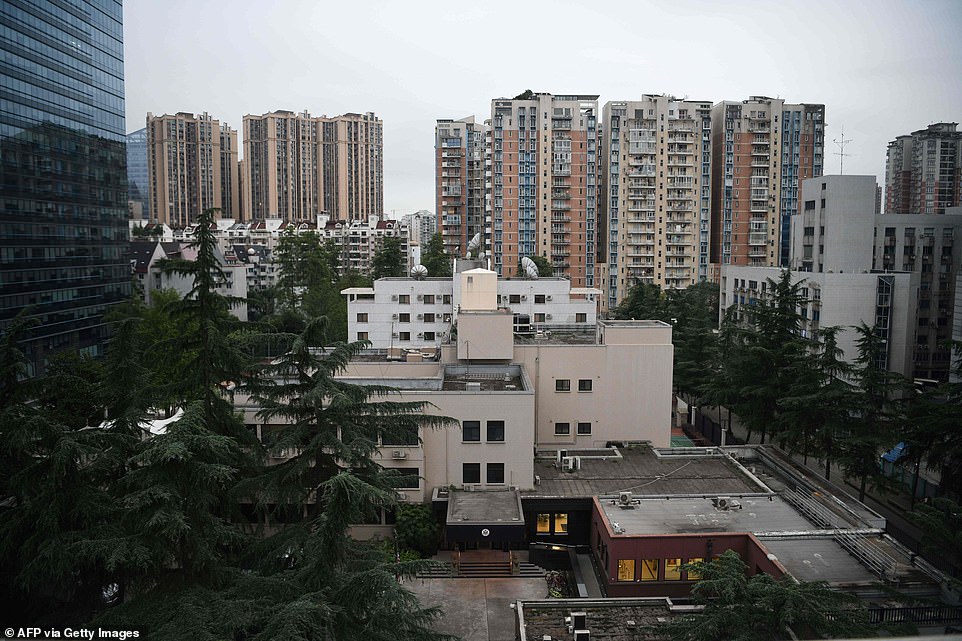 A general view shows the US consulate in Chengdu, which China has ordered to close on a 72-hour deadline 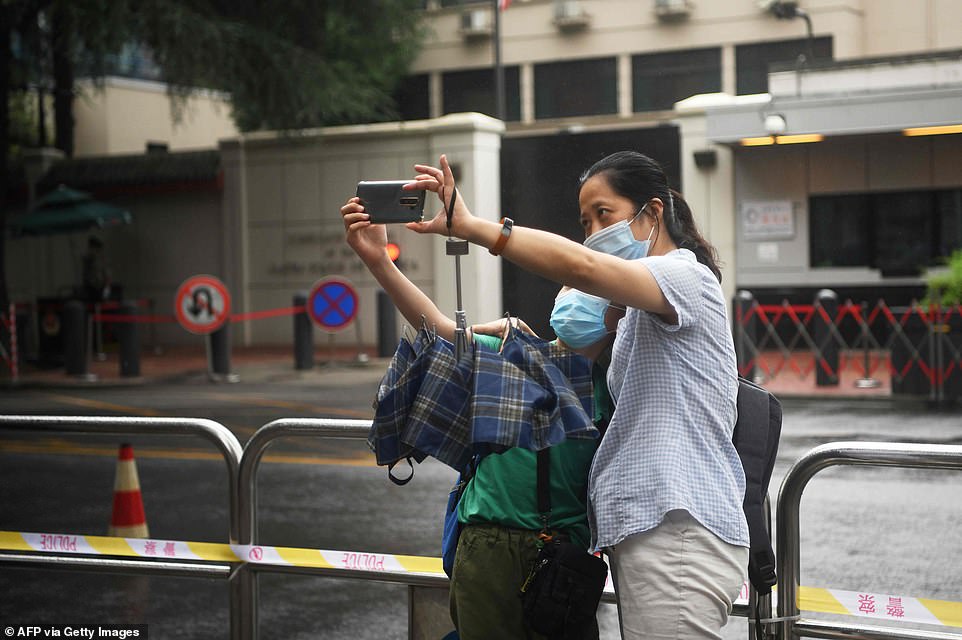 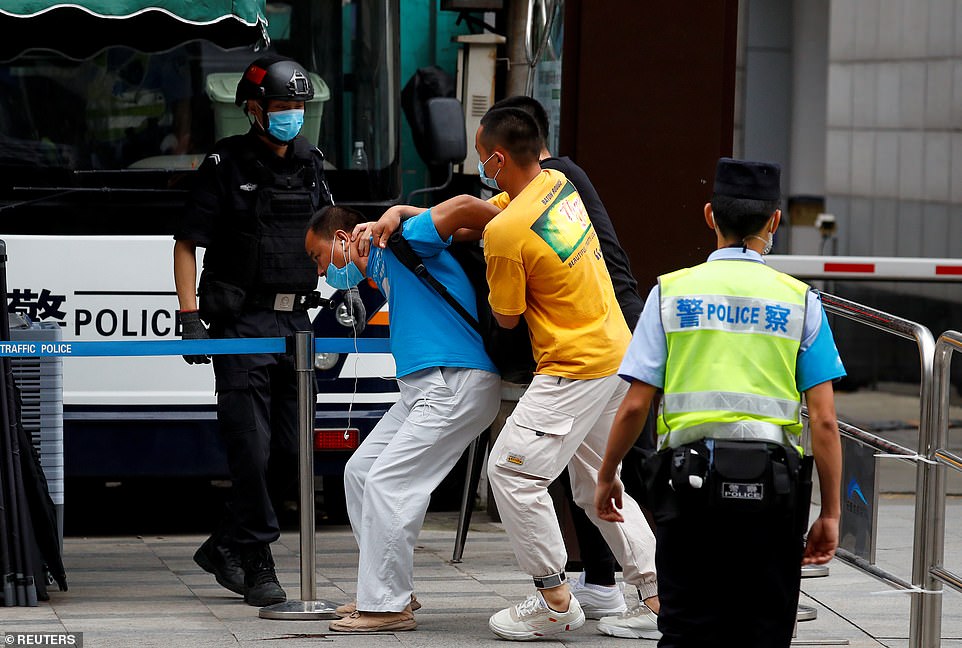 Plain clothes police officers detain a man who attempted to display a sign outside the U.S. Consulate General in Chengdu

Residents in Chengdu expressed mixed views on the closure of the U.S. consulate in the city.

‘What I fear the most is the U.S. won’t just stop there, it might get uglier,’ said 19-year-old university student Zhang Chuhan.

‘I approve. The U.S. closed our consulate, I think we should shut theirs too,’ said a man who identified himself as Jiang, 29.

Relations between Washington and Beijing have deteriorated this year to what experts say is their lowest level in decades over issues ranging from trade and technology to the novel coronavirus, China’s territorial claims in the South China Sea and its clampdown on Hong Kong.

China’s foreign ministry spokesman Wang Wenbin has said some personnel at the Chengdu consulate were ‘conducting activities not in line with their identities’ and had interfered in China’s affairs and harmed its security interests. He did not say how. 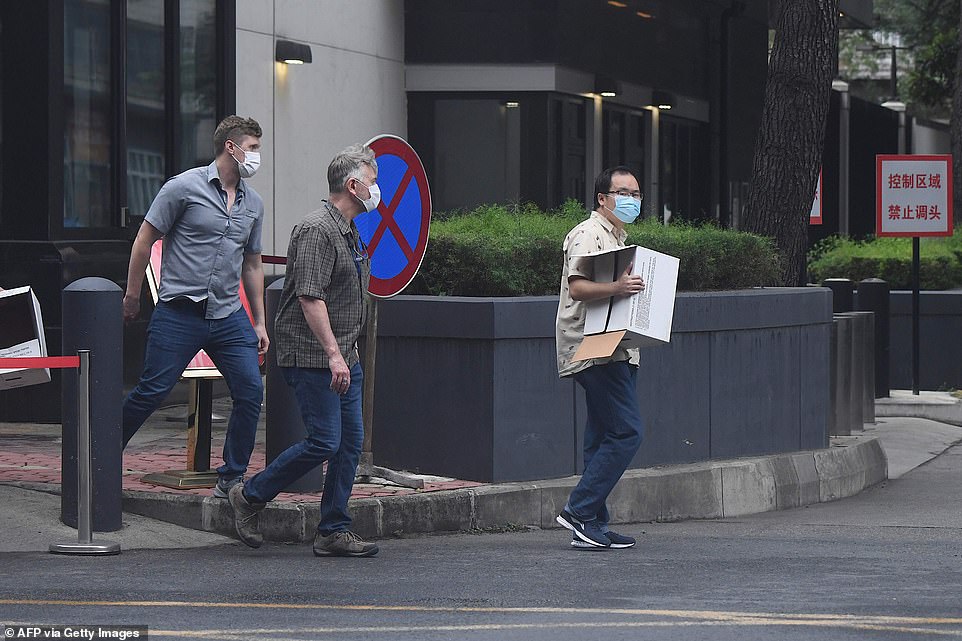 Staff at the US consulate in the Chinese city of Chengdu were busy packing belongings and removing the American insignia from the building, a day after Beijing ordered its closure in a tit-for-tat diplomatic battle with Washington 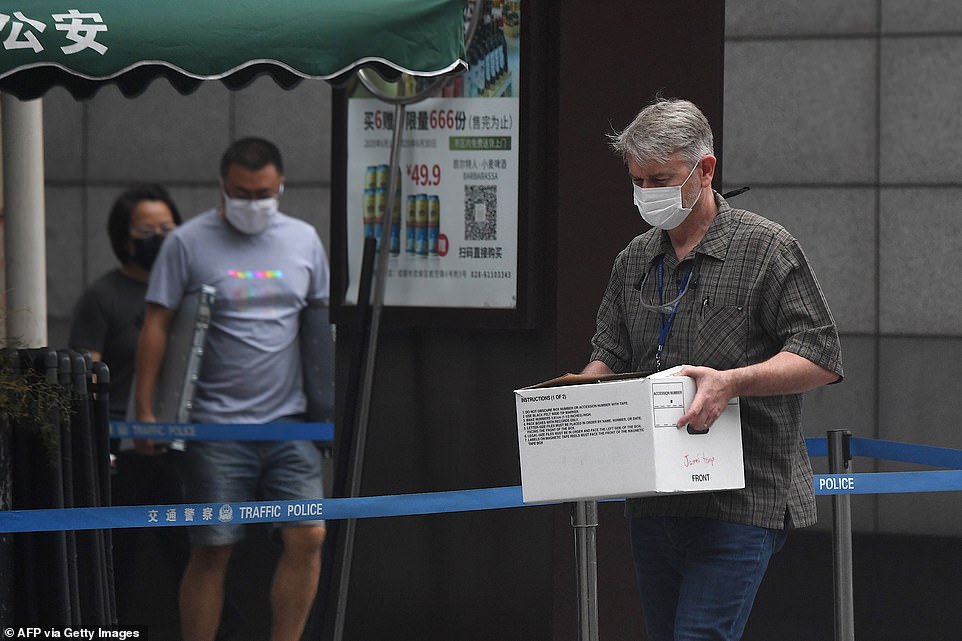 People carry items out of the US consulate in Chengdu, southwestern China’s Sichuan province, on Saturday 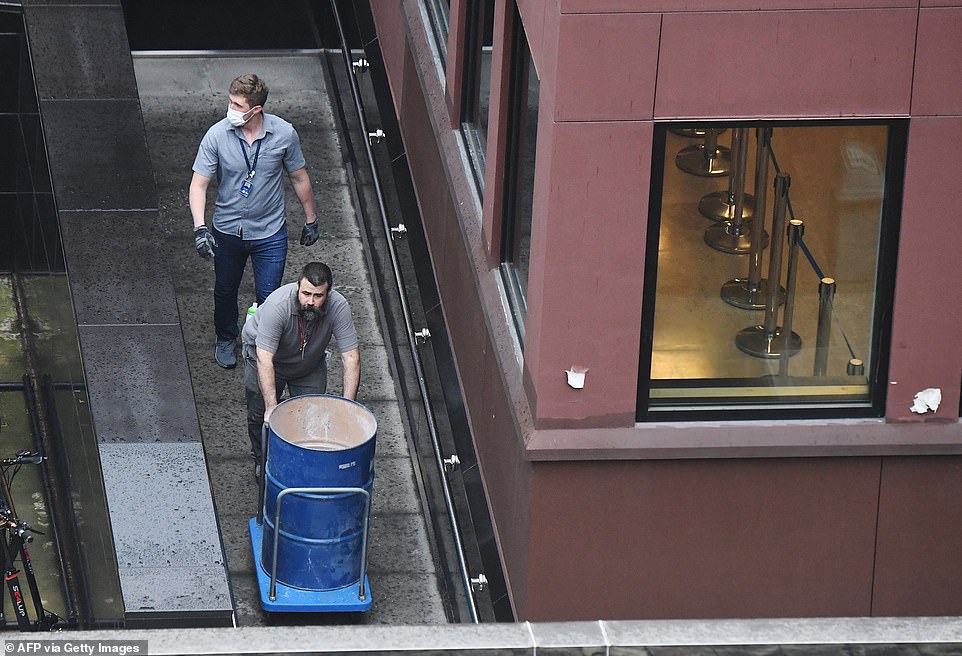 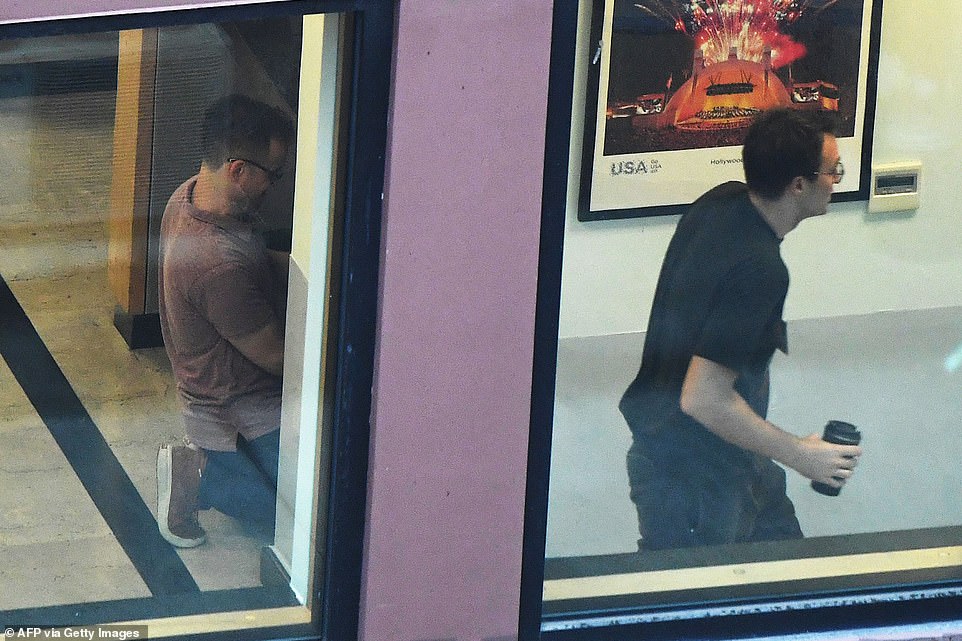 Meanwhile, a Chinese researcher accused of concealing her ties to the Chinese military on a visa application she submitted so she could work in the U.S. was booked Friday into a Northern California jail and was expected to appear in federal court Monday.

Sacramento County jail records show Juan Tang, 37, was being held on behalf of federal authorities after she was arrested by the U.S. Marshals Service. It was unclear if she had an attorney who could comment on her behalf.

The Justice Department on Thursday announced charges against Tang and three other scientists living in the U.S., saying they lied about their status as members of China´s People´s Liberation Army. All were charged with visa fraud.

Tang was the last of the four to be arrested, after the justice department accused the Chinese consulate in San Francisco of harboring a known fugitive. 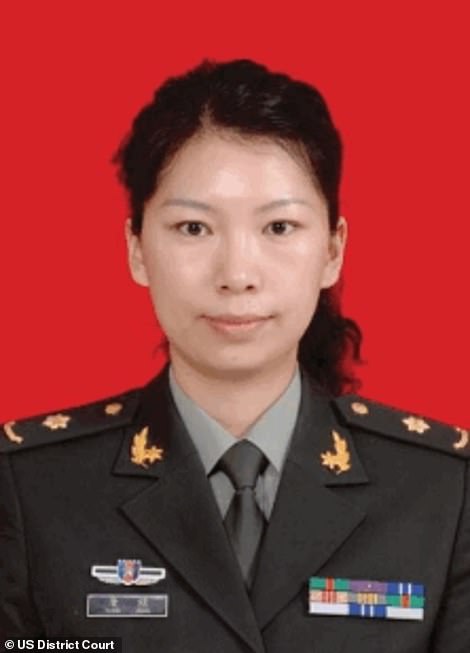 Chinese biologist Juan Tang, 37, is being held on US federal charges after allegedly lying about her military ties

The consulate did not immediately respond to email and Facebook messages seeking comment and it was not possible to leave a telephone message.

The Justice Department said Tang lied about her military ties in a visa application last October as she made plans to work at the University of California, Davis and again during an FBI interview months later.

UC Davis said Tang left her job as a visiting researcher in the Department of Radiation Oncology in June. Her work was funded by a study-based exchange program affiliated with China´s Ministry of Education, the university said in a statement.

Agents have said they believe Tang sought refuge at the consulate after they interviewed her at her home in Davis on June 20. The FBI has been interviewing visa holders in more than 25 American cities suspected of hiding their ties to the Chinese military.

The allegations came as U.S.-China relations continued to deteriorate, particularly over allegations of Chinese theft of U.S. intellectual property.

China’s consulate in Houston was shut down Friday on order of U.S. authorities after Washington accused Chinese agents of trying to steal medical and other research in Texas.

‘We can confirm that the PRC Consulate General in Houston is closed,’ a State Department spokesperson confirmed late Friday. The spokesperson spoke on condition of anonymity because they weren’t authorized to comment publicly.