A group of activists tormented cancer patients, their families and medical staff outside Melbourne’s Peter MacCallum Cancer Centre on Wednesday.

According to the ABC, the pro-life protesters called doctors and medical staff ‘murderers’ for ‘legally assisting patients to commit suicide’.

‘The extraordinary and unethical act of intentionally ending the life of a patient is attempted to be ‘normalised’,’ the flyer reads. 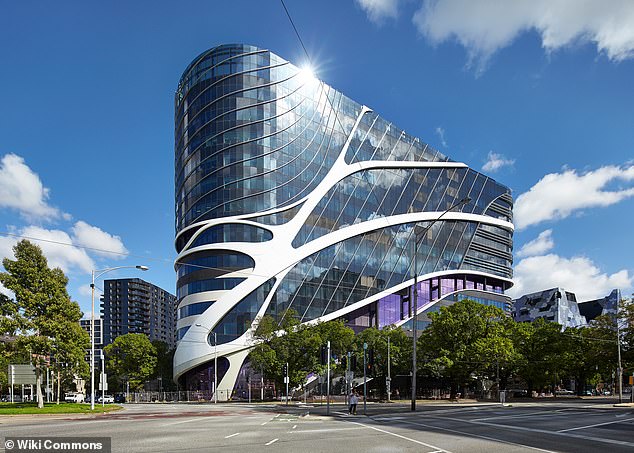 A group were seen tormenting cancer patients, their families and medical staff by the protesters outside Melbourne’s Peter MacCallum Cancer Centre (pictured)

‘Doctor-prescribed suicides and state-sanctioned extra-judicial executions will be legal here at Peter Mac.’

The protest came ahead of the revision of voluntary assisted dying laws, which come into effect on June 19.

The activists are believed to have been angered over an advertisement for a voluntary assisted dying care navigator position at the hospital.

The hospital website described the position as: ‘point of contact for members of the public, health practitioners and health services for information about voluntary assisted dying’.

The historic voluntary euthanasia laws come into effect on June 19th and will allow people suffering a terminal illness with less than six months to live to opt for a medically assisted death.

Active advocate for the laws and Reason Party MP Fiona Patten said staff, family members of patients and cancer patients themselves were heckled by the group. 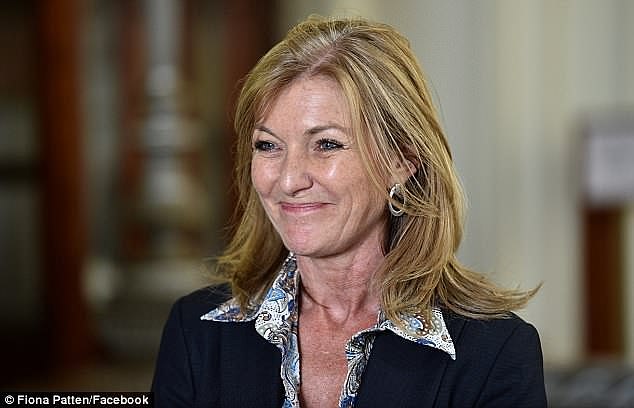 Active advocate for the laws and Reason Party MP Fiona Patten (pictured) said staff, family members of cancer patients and patients themselves were heckled by the group

A woman who was visiting her husband with terminal cancer was approached by the protesters.

‘This is just horrible,’ Ms Patten wrote on Facebook.

‘A woman with stage-four cancer was handed this awful flyer when visiting her dying husband and staff members are reporting that they are being labelled ‘murderers’ by activists as they go to work.’

‘It would be a very low day for Victoria if I had to create laws to protect terminally ill people accessing the hospital.’

Ms Patten said people who access healthcare have the ‘absolute right’ to privacy, dignity and not to be harassed. 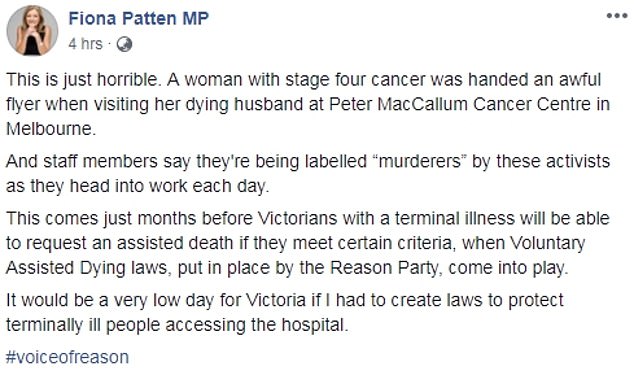 Ms Patten said people who access healthcare have the ‘absolute right’ to privacy, dignity and not to be harassed