It’s official: jade eggs do not belong in women’s vaginas, never have done, and likely never will do.

That is the conclusion of a study by famed Goop critic Dr Jen Gunter, an OB/GYN and New York Times columnist who sought to settle the debate once and for all.

Jade eggs became an unlikely source of contention in 2017 when Gwyneth Paltrow’s wellness site Goop suggested women put the $66 product inside their vagina – and leave it there all day – to improve their pelvic floor, balance hormones and regulate the menstrual cycle.

The backlash led to the site being fined $145,000 for promoting baseless advice.

Now Dr Gunter has completed a study, published today in a medical journal, which investigated Goop’s claim that jade eggs were used in ancient Chinese culture for this purpose. 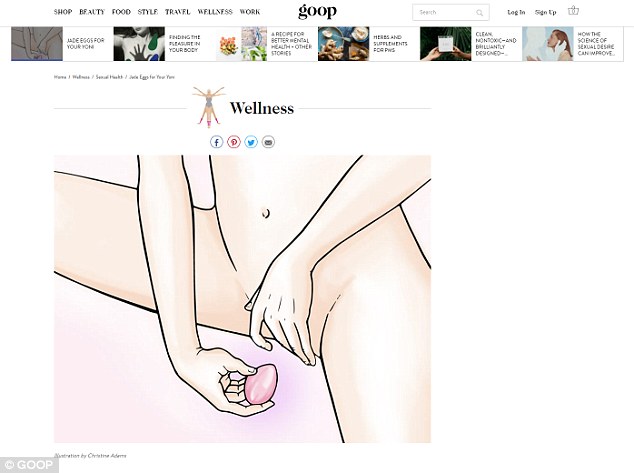 ‘No evidence was found to support the claim that vaginal jade eggs were used for any indication in ancient Chinese culture,’ Drs Gunter and Parcak write in the study, published in the journal Female Pelvic Medicine & Reconstructive Surgery.

Sharing the study, Dr Gunter said: ‘[D]on’t tell me a jade eggthusiast knows more than I do about the vagina and not expect me to cross every t and dot every i.’

The study marks yet another twisting of the knife just over a month after Goop agreed to pay $145,000 in civil penalties in a case brought by prosecutors in eight California counties for making ‘unsubstantiated’ marketing claims.

The company had promoted Jade and Rose Quartz eggs – retailing on its website for $66 and $55, respectively – claiming that they could balance hormones, regulate menstrual cycles, prevent uterine prolapse and increase bladder control when inserted into a woman’s vagina and left there for hours.

They also sold an Inner Judge Flower Essence Blend for $22, which was a mixture of floral extracts that they claimed could help prevent depression if ingested or added to bathwater.

However, ad watchdog truthinadvertising.org took issue, and started kicking up a fuss a year ago.

Finally, on September 4, the case was closed.

From now on, Goop will need ‘competent and reliable scientific evidence’ to back up any health claims, the court ordered.

The company will also have to shell out refunds to customers who request it.

Reacting to the settling, Goop said in a statement that they do not accept liability, but they wanted to settle the matter quickly without it escalating.

They concede that the advertising was off, but stand by the products.

Dr Parcak shared the study on Twitter today, adding: ‘Moral of the story: don’t stick anything where it doesn’t belong.’