Dozens of protesters gathered in London today calling for the police to be defunded and the end of racial disparity in the NHS, as the Health Service marks its 72nd anniversary.

All Black Lives UK (ABLUK), which organised the protest in Bristol that led to the Edward Colston statue being pulled down, held a demonstration at Marble Arch on Sunday afternoon.

An ABLUK spokesman called for the abolition of ‘racial disparity’ within the Health Service, as the NHS celebrates its 72nd anniversary today.

All Black Lives UK (ABLUK) gathered at Marble Arch on Sunday afternoon, calling for the police to be defunded and the end of racial disparity in the NHS 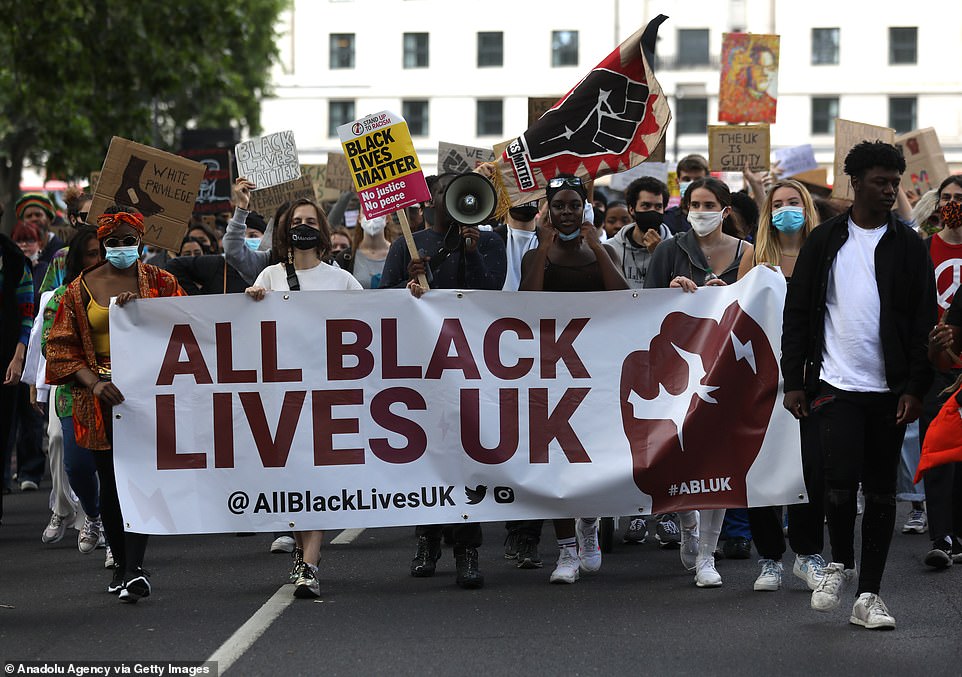 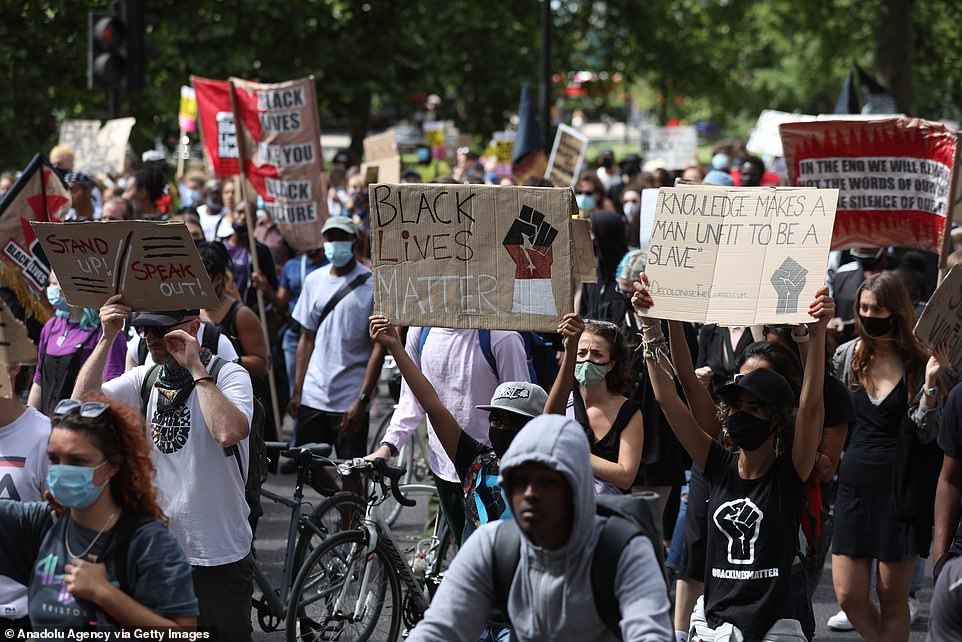 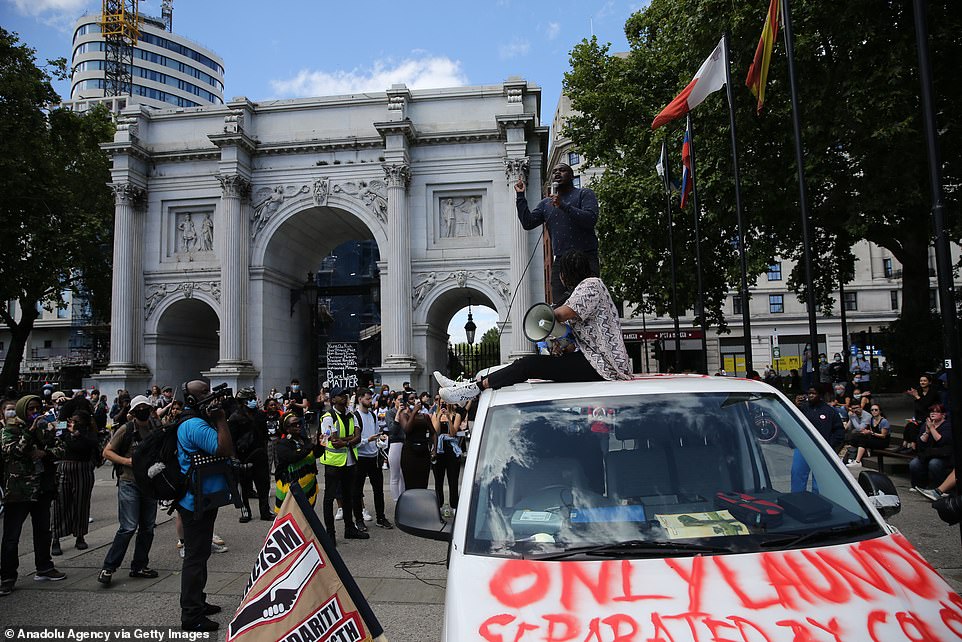 Above, a speaker addresses crowds while standing on a van during an ABLUK rally at Marble Arch on Sunday

Speaking to a crowd of about 100 people, ABLUK spokesman Tyrek Morris, 21, said: ‘We are protesting for black lives and one of the demands we have is to abolish the racial disparity within the NHS, especially towards black women.

‘We need to implement extensive measures to prevent the disproportionate suffering of black women in healthcare and bring to an end the significantly increased black maternal mortality rate.’

The journalism student also addressed reports around calls for the defunding of police. 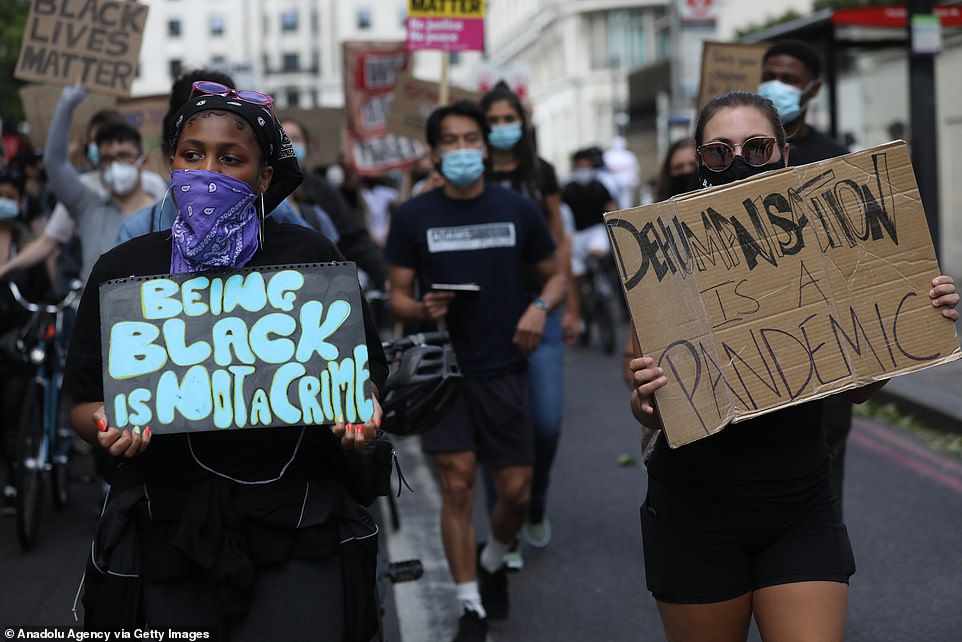 ABLUK spokesman Tyrek Morris, 21, also addressed reports around calls for the defunding of police at the demonstration 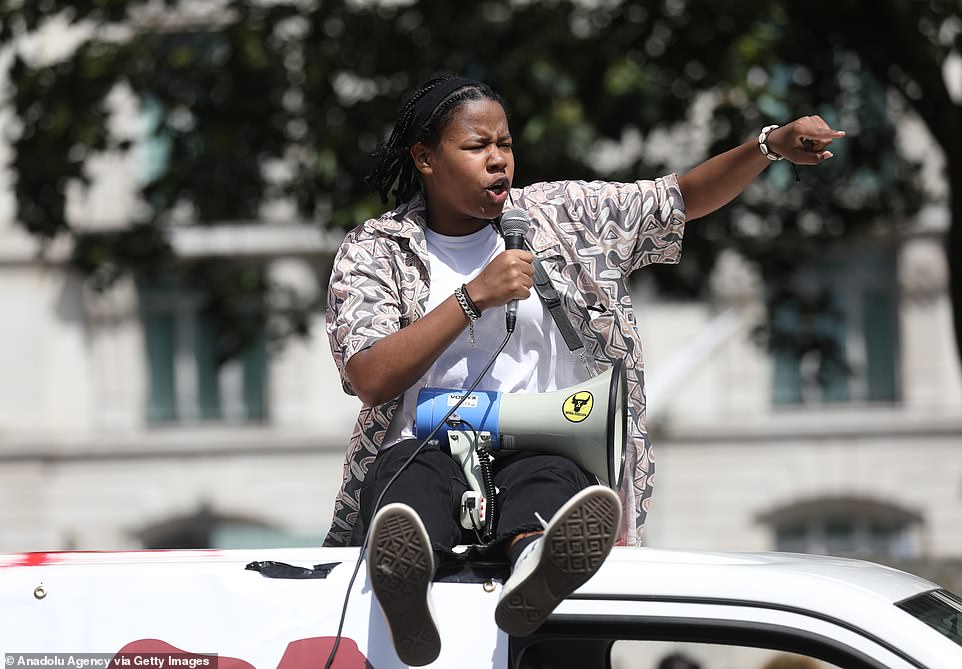 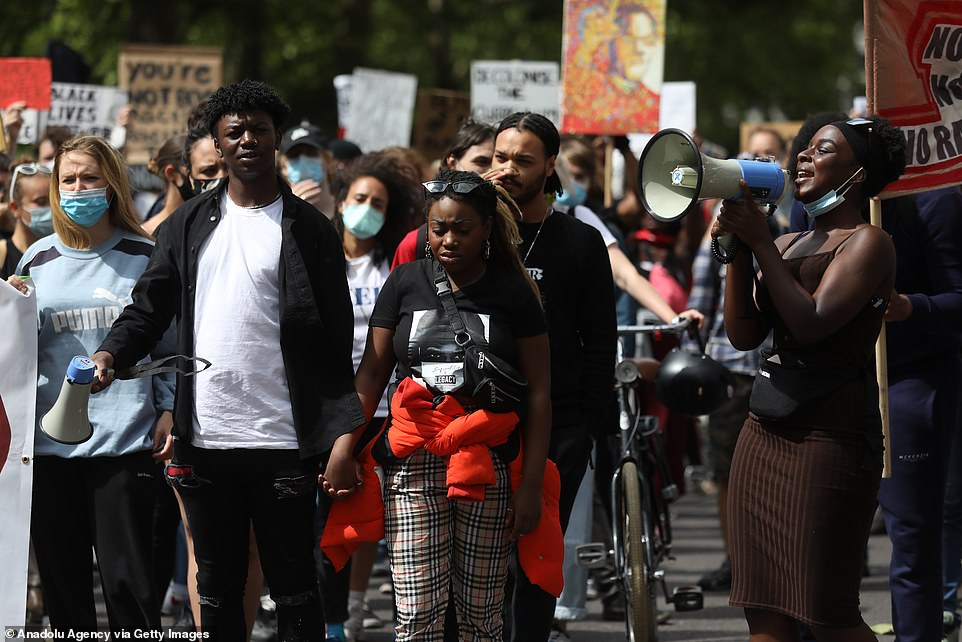 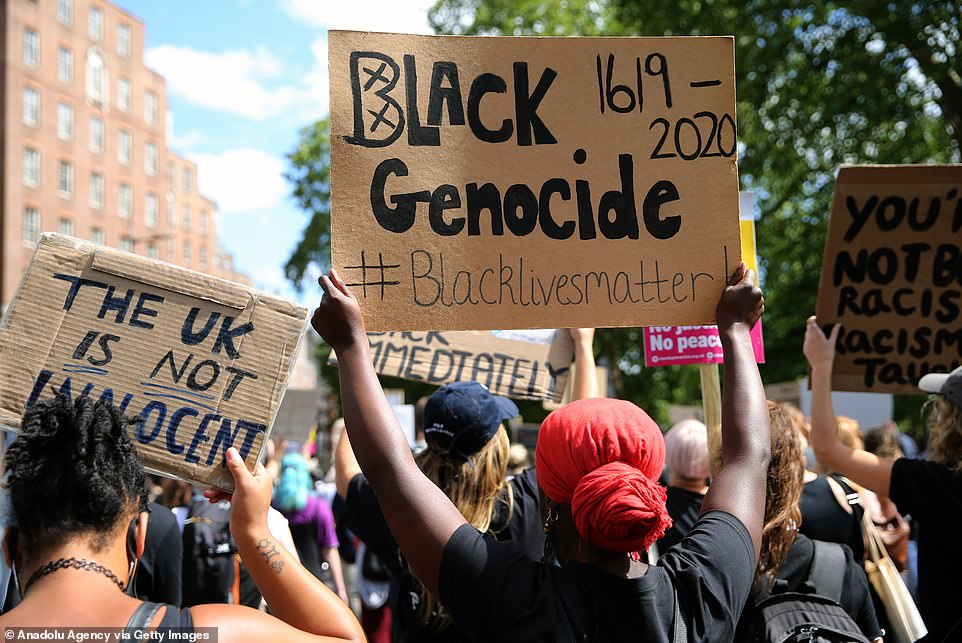 He said: ‘Defund the police does not mean abolishing the police. We need police.

‘When we say defund the police, we don’t mean abolish the police, we mean take some of that money that you’re putting heavily into Scotland Yard and invest that into the community.

ABLUK is also calling for the end of ‘racial discrimination’ in the criminal justice system. 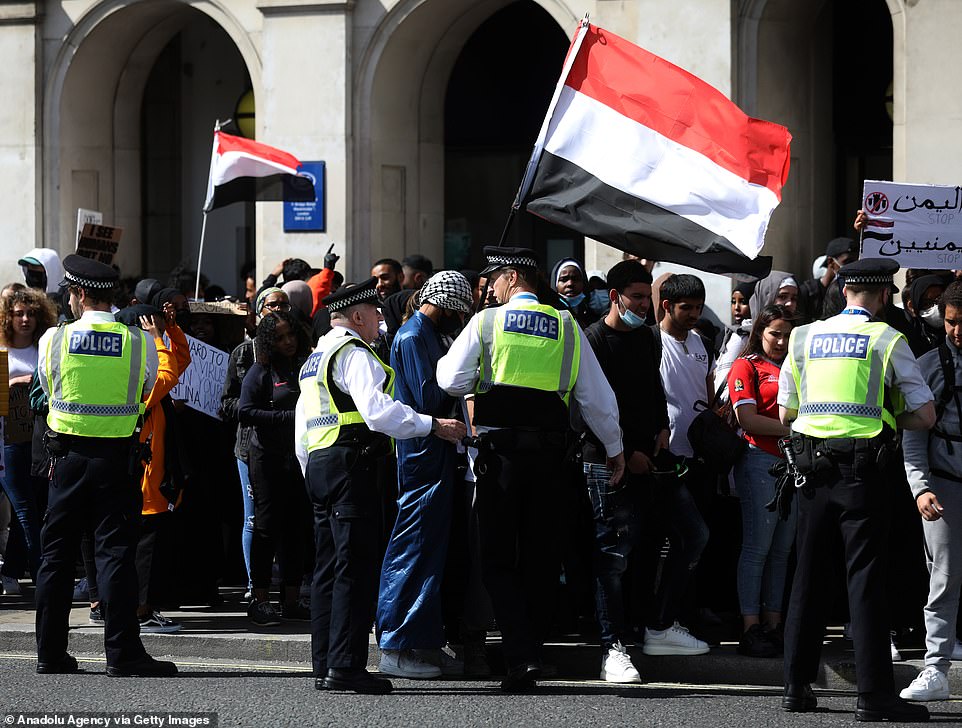 Above, protesters gather at an All Black Lives UK demonstration at Marble Arch, calling for the defunding of the police 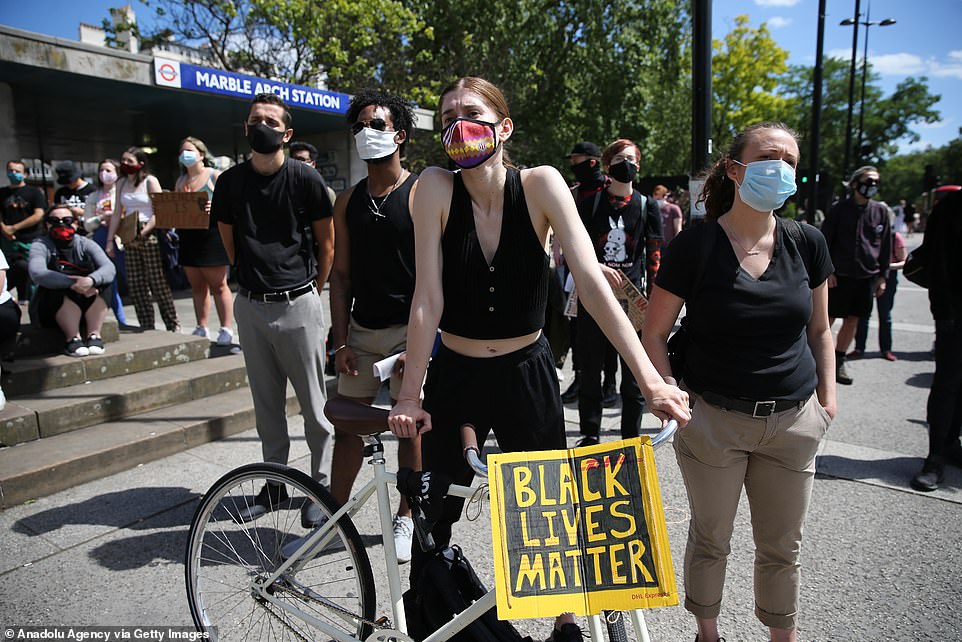 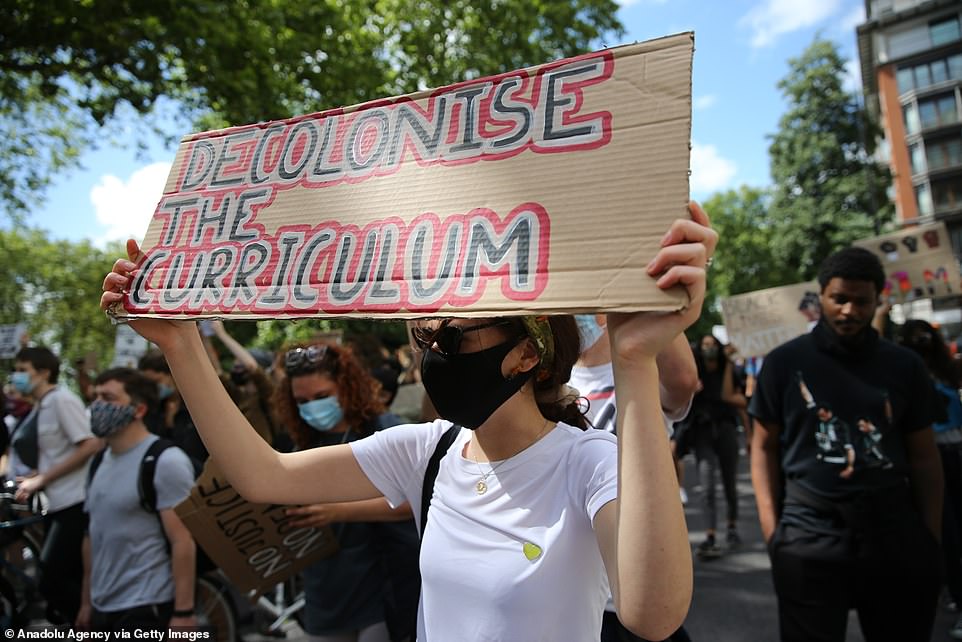 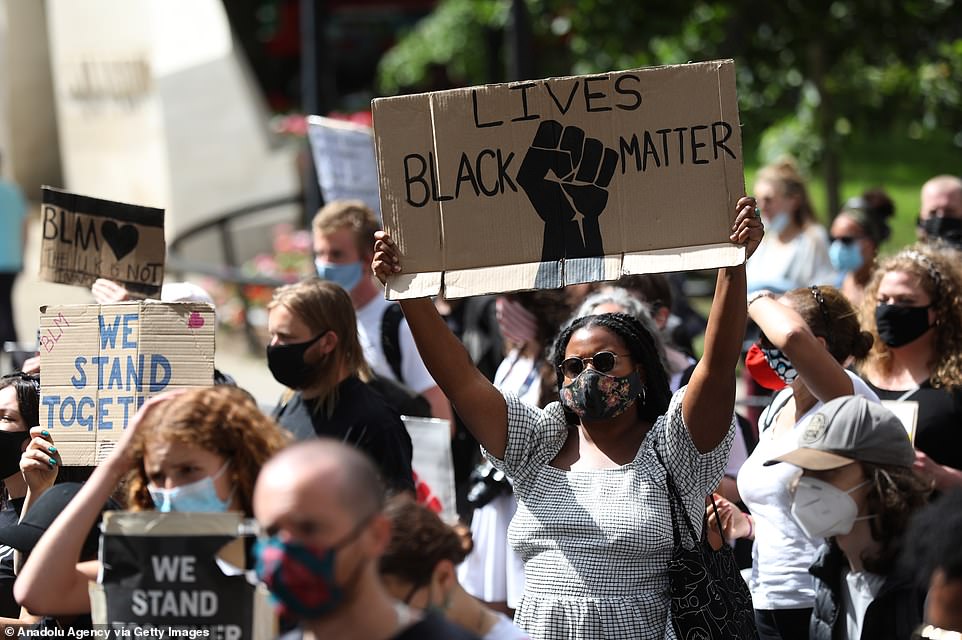 The organisation also wants education reforms to ensure the curriculum provides an ‘accurate account of colonialism and British black history’.

ABLUK have differentiated themselves from the main Black Lives Matter (BLM) movement.

Protesters at the ABLUK rally marched from Marble Arch towards Downing Street shortly before 3pm.

This comes after the official Twitter account of the Black Lives Matter (BLM) UK movement was caught up in an antisemitism row this week. 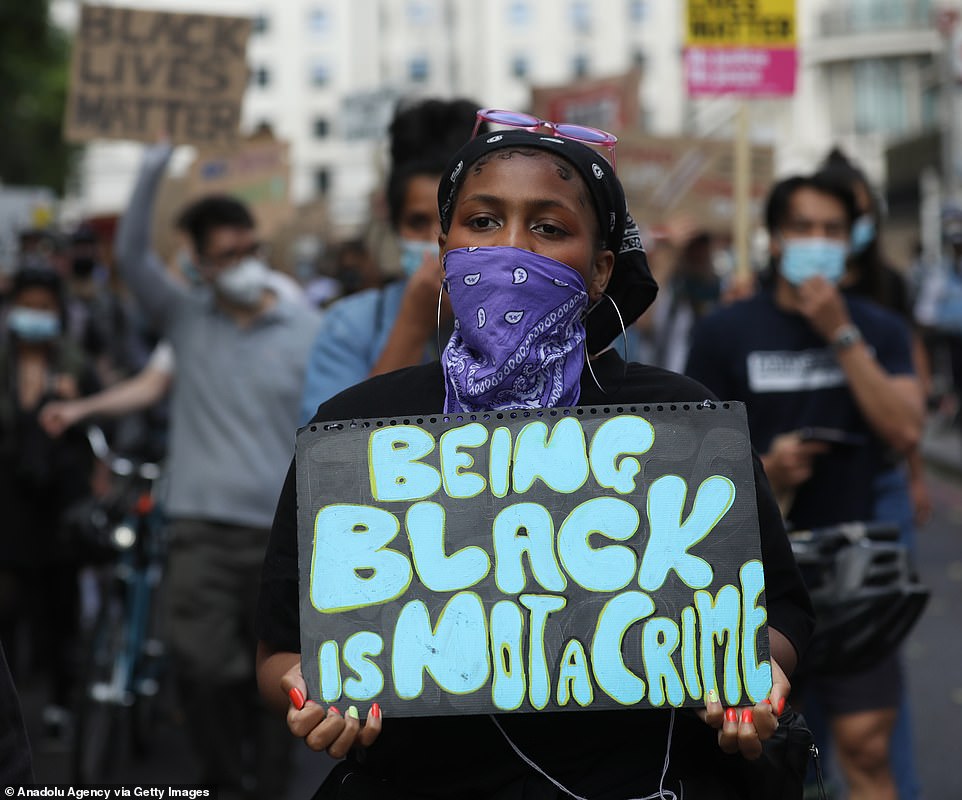 ABLUK spokesman Tyrek Morris, 21 spoke of the organisation’s demand to ‘abolish the racial disparity within the NHS, especially towards black women’ at today’s rally 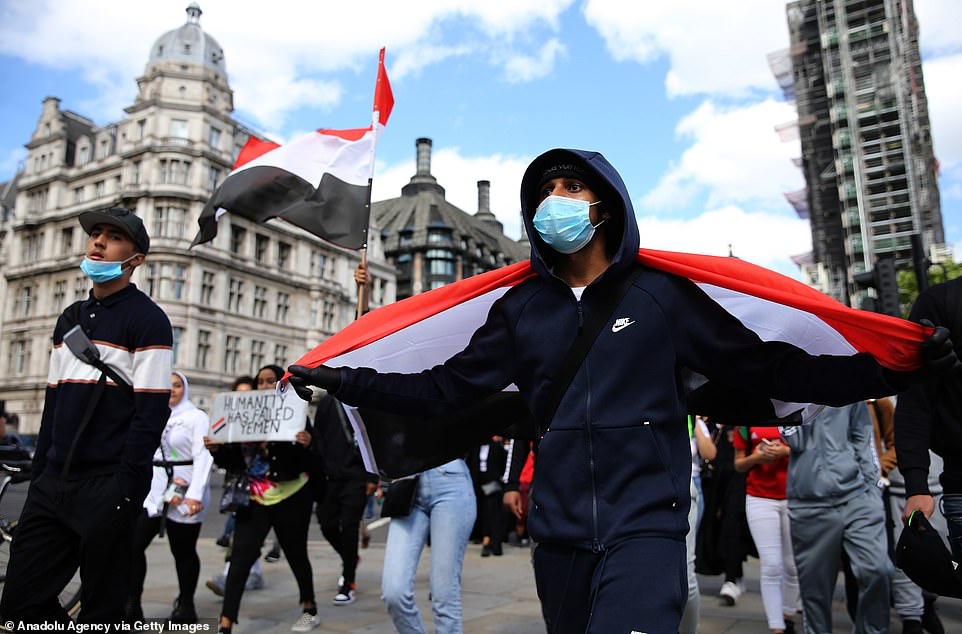 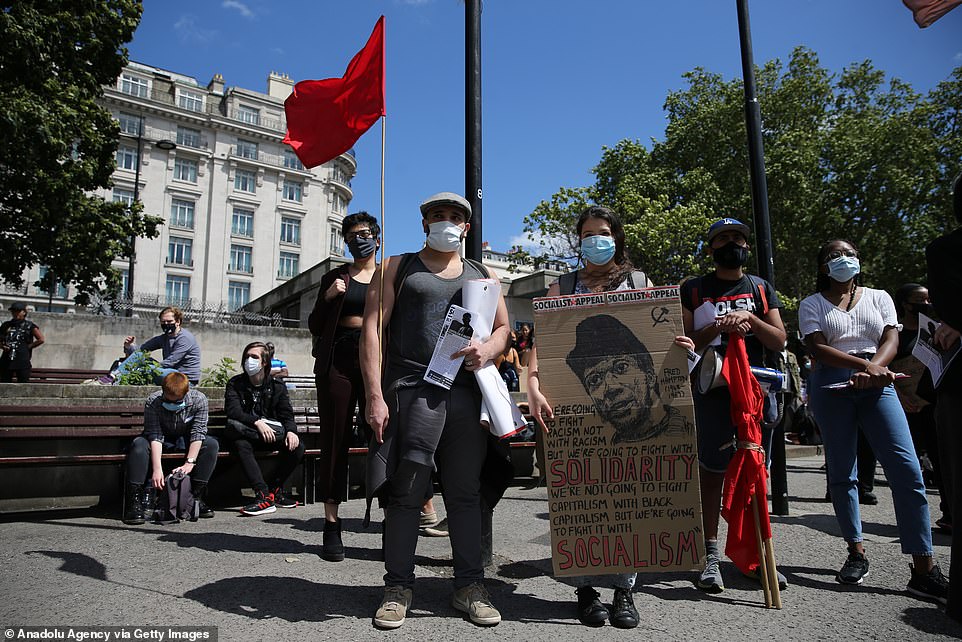 It tweeted in support of Palestine over plans by Israel to annex its West Bank settlements.

The verified account claimed mainstream British politics were being ‘gagged of the right to critique Zionism,’ before Tweeting that the movement ‘loudly and clearly stands beside our Palestinian comrades’ and adding in block capitals ‘FREE PALESTINE’.

But the Tweet has sparked outrage among the Jewish community, with some describing the idea of politicians being ‘gagged’ over their criticism of Zionism as being an ‘antisemitic trope’.

The President of the Board of Deputies of British Jews, Marie van der Zyl, criticised the tweet, describing it as ‘beyond disappointing’. 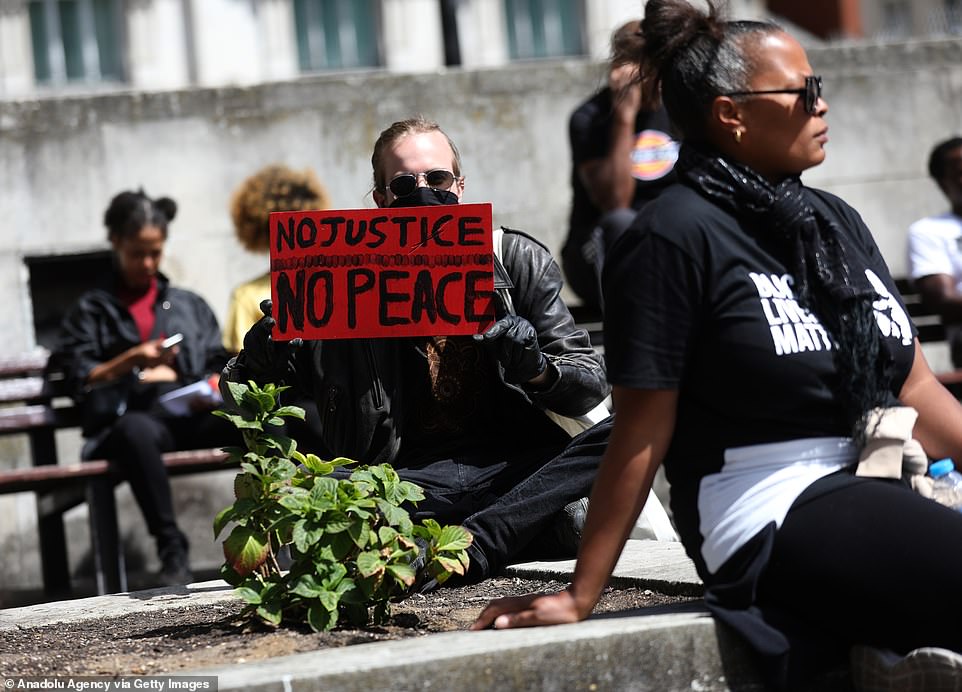 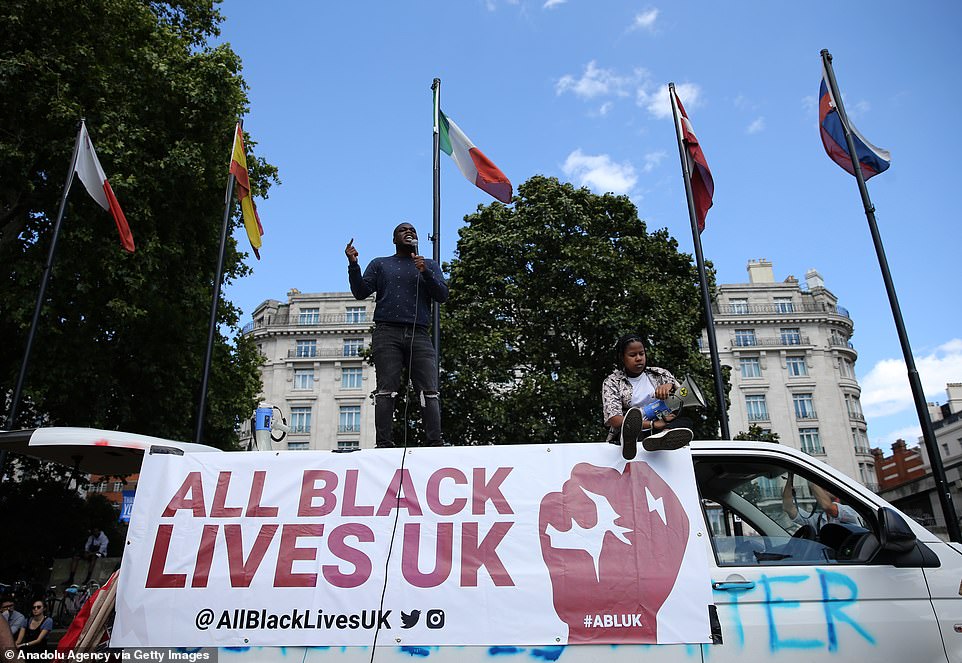 ABLUK have said they are separate from the Black Lives Matter UK movement, but that they have similar aims 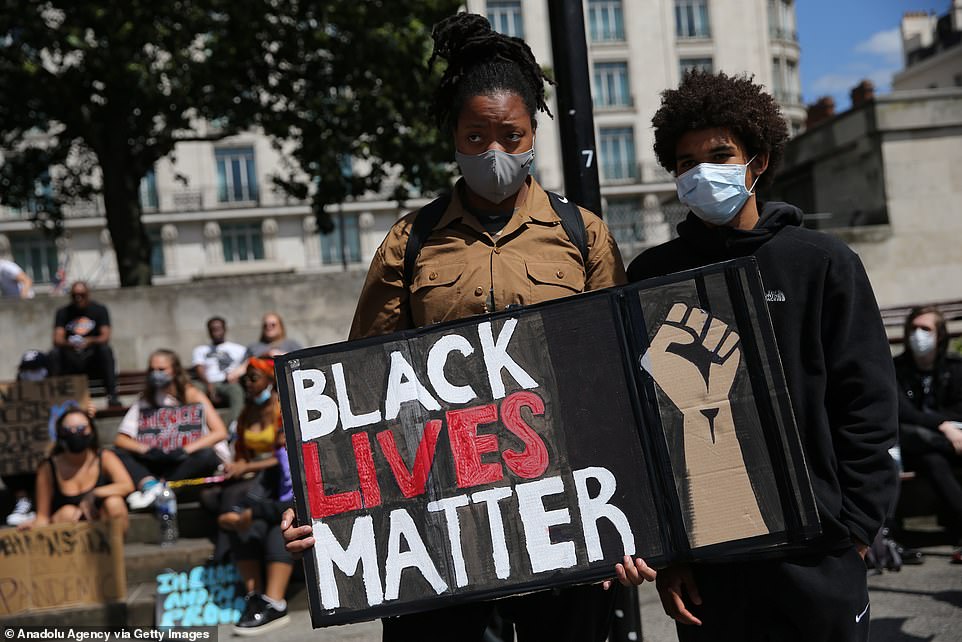 Protesters gather at Marble Arch holding placards as ALBUK call for the end to racial disparity in the NHS, as the Health Service commemorates its 72nd anniversary 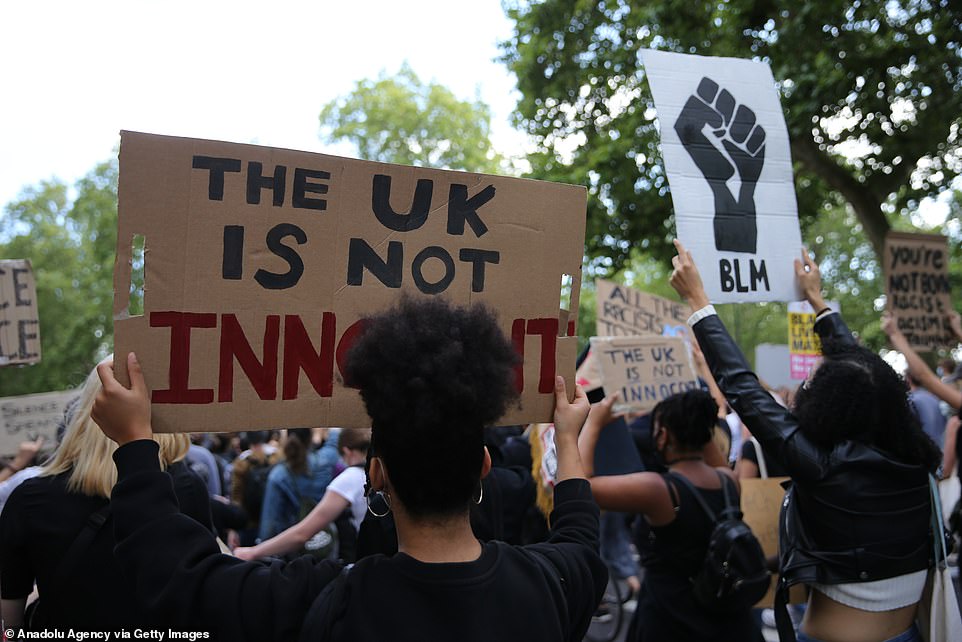 Above, protesters hold placards during a Black Lives Matter rally through central London on Sunday 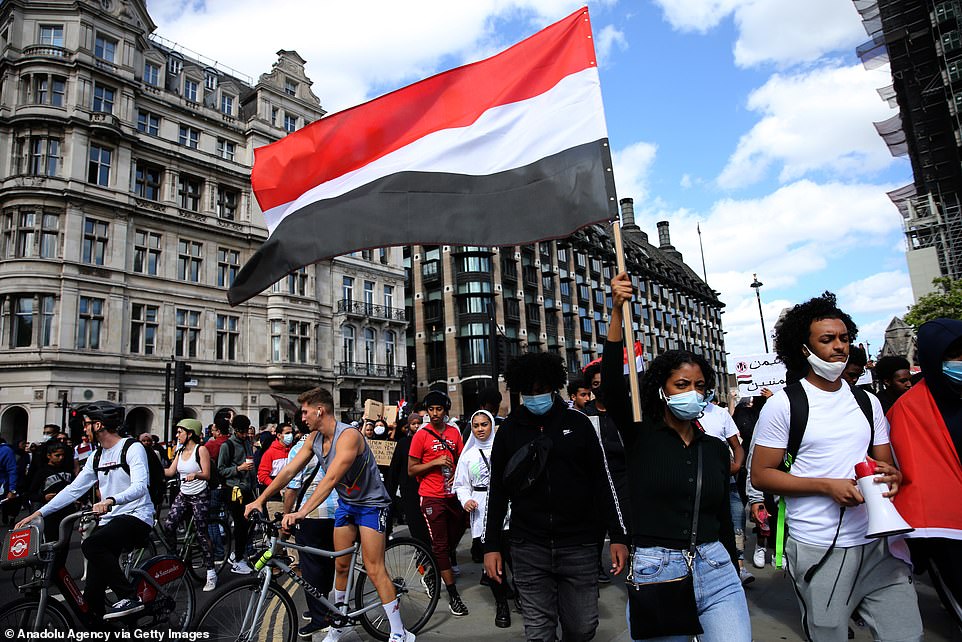 Groups of protesters also held up the Yemen flag at Parliament Square today, showing their solidarity with the country as they called on justice for Yemen 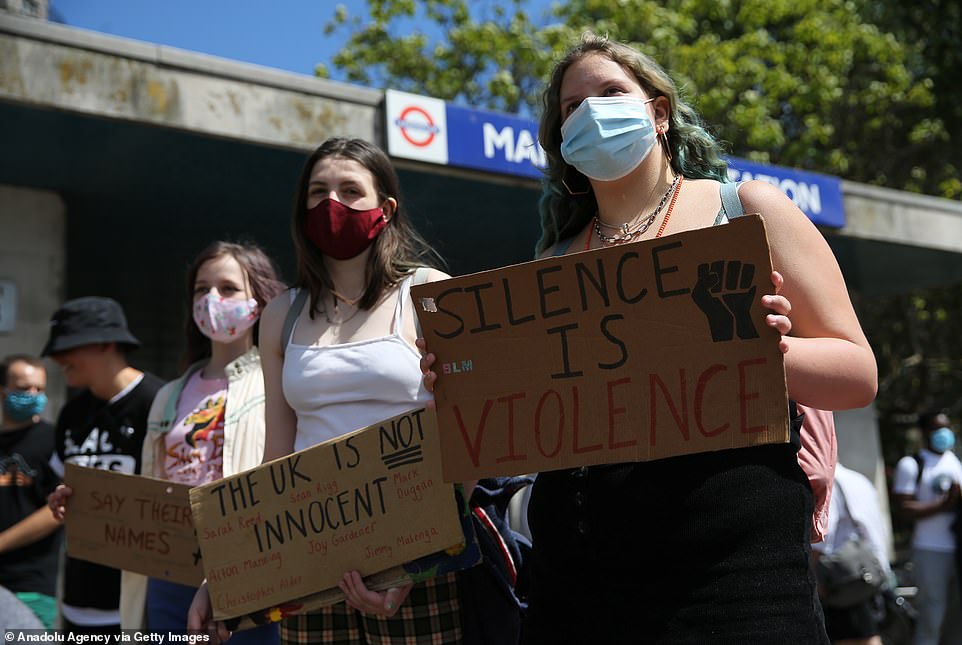 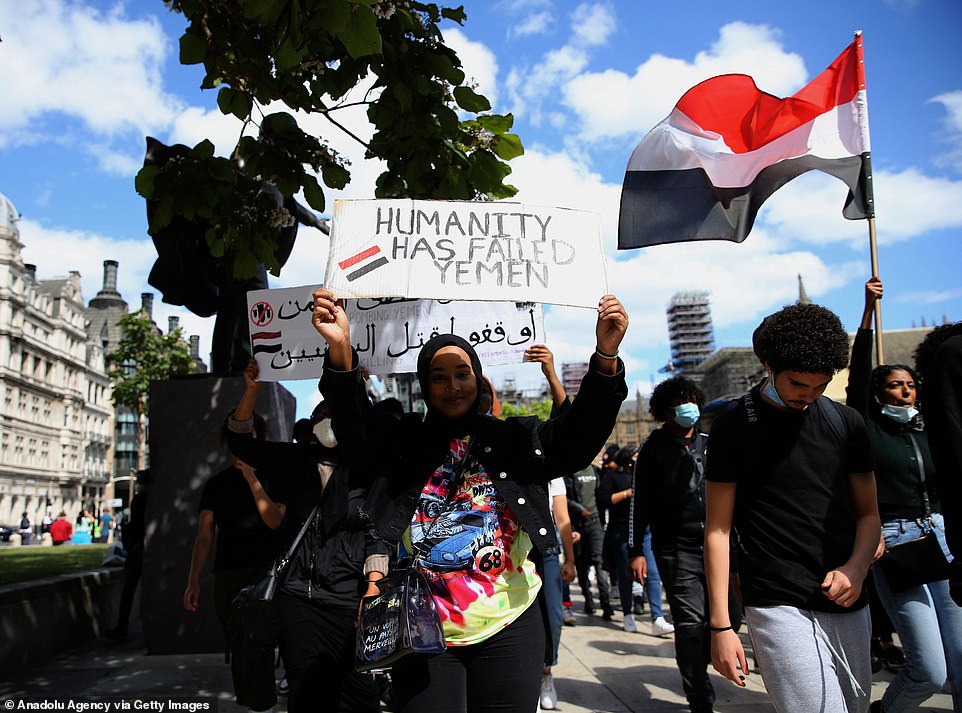 This week, Black Lives Matter badges were also absent from Sky Sports’ Premier League coverage, with most guest pundits on Soccer Saturday instead supporting football-focused anti-racism charity Kick It Out.

Glen Johnson opted not to support either campaign, however, after Sky allowed pundits to make their own decisions over whether to wear the emblems.

But for BT Sport’s broadcast of Norwich’s clash against Brighton during the lunchtime kick-off on Saturday, every guest was wearing BLM badges.

Sky Sports presenters have worn the badges featuring the campaign’s slogan since the league returned after the coronavirus outbreak on June 17.

It appears that the Soccer Saturday team are the only guests to have decided to support Kick It Out instead, with other experts opting not to wear any badges at all.