Anti-terrorism police officer found guilty of having sex with girl, 14

An anti-terrorism police officer was today jailed for eight years for having sex with a 14-year-old girl after he tracked her down using Snapchat mapping.

Peter Drummond, 38, travelled from his house in the Berkshire village of Three Mile Cross to the South West of England twice to have sex with his victim, Truro Crown Court in Cornwall heard.

On one occasion the paedophile let himself in via an unlocked gate at the home the girl shared with her mother and her mother’s partner – and on the second visit he climbed through her bedroom window, the court was told.

After the case, police branded him a ‘disgrace to his family and the organisation he was employed by’, while the victim’s mother said her daughter had been ‘destroyed’ by his actions.

Drummond was charged with three counts of rape and three alternative charges of sexual activity with a child. Four of the charges related to October 2017 while two dated to the next month.

Drummond denied the charges but did admit to having ‘consensual’ sex with the girl, saying that he had no reason to believe she was under the legal age of consent. 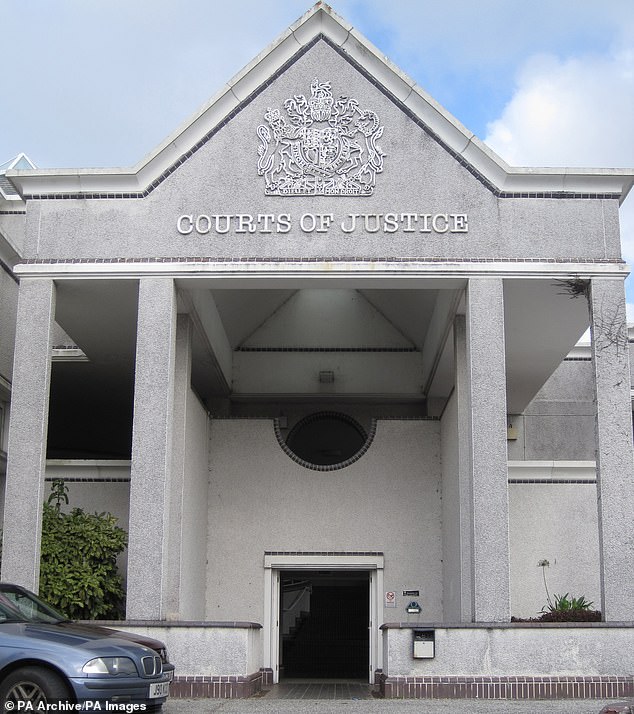 After a week-long trial and three hours of deliberation, a jury convicted Drummond today of three counts of sexual activity with a child.

He was found not guilty of three charges of rape. Drummond sighed in the dock as the verdicts were read out.

Judge Simon Carr jailed Drummond for eight years concurrently on all three charges. He told him: ‘You found someone you could manipulate and pretended to show care and concern for her.’

The court had heard Drummond has worked as a specialist anti-terrorism police officer with the Ministry of Defence since 2006.

Ghost mode: How to keep your location private on Snapchat

When you have added a friend on Snapchat, you can choose whether or not to share locations with each other on Snap Map. The location only updates when the app is open.

Location sharing options include Only Me, also known as Ghost Mode, which means your location won’t be visible to anyone else on the map. Users can turn this on and off, or set a timer if they only want to be private for a short time.

The app also gives users the option to share their location with specific friends. Friends selected are not notified when you choose them.

To edit location settings, tap the ⚙️ settings button in the top-right corner of the Map screen (see below). 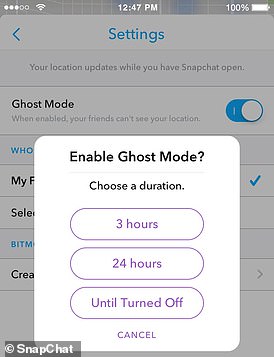 Addressing the jury, she said: ‘You may think the dangers of social media are highlighted in this case where a child finds herself in a situation that they do not understand and they do not want.

‘You may think, having heard the evidence in this case, that this is what happened on this particular occasion.’

She said the girl was distressed previously and met a man on social media who appeared to be supportive.

Ms Elder said. ‘Online he had been supportive as she had anxiety. You may want to think that that support from him online had an ulterior motive.’

Ms Elder said police used automatic number plate recognition cameras to show that Drummond’s BMW had travelled down and returned from Cornwall on the dates when they had sex.

‘He had come to her house using Snapchat mapping,’ she added. ‘There is no dispute that she did go through a sexual experience. As you will hear, Mr Drummond admits having sexual intercourse with her on these occasions.’

She said evidence of Drummond’s DNA was allegedly found in the girl’s bedroom.

The court also heard how the girl received £30 from a bank account in the name of P Drummond, which the prosecution said was the defendant’s account, so that she could buy a new pair of shoes.

Giving evidence during the trial, the girl’s mother told the jury how her daughter had a laptop, mobile phone and iPad and used the devices daily.

She took to the witness stand a day after the judge cleared the court of spectators and press for her daughter to give evidence.

The mother said she first became aware of the sexual activity involving her daughter and the defendant when she was contacted by one of her daughter’s friend’s mums.

She said: ‘I was told about a rumour going around school that she had contact with someone by the name of Pete who was high up in the police force. I was told he’s also purchased her shoes.

‘Initially she said the rumours weren’t true but she became more and more upset and didn’t want to talk about it.’

The mum confirmed that her daughter did have new shoes around this time and when she asked to see her bank statement she could see a payment of £30 made by ‘P. Drummond’.

‘She said he added her on Snapchat and Instagram under the name Bulldog. She said they’d been chatting and he found our address on Snapchat maps and came to our home while we were out. She said he’d come in the back of the house.’

The mother added how on the first occasion Drummond visited she and her partner had been out shopping and when they came home the girl stayed in her room and ‘didn’t engage with anyone’.

On the second occasion the mum was working a night shift but her partner was at home while her daughter was in her bedroom.

The mother said: ‘At 6am she messaged me saying she wasn’t feeling well and was in her room when I got home. She was quite subdued.’

Answering the questions of defence barrister Kaja Reiff Musgrove during the trial, Drummond confirmed that he’d been employed with the Ministry of Defence since 2005 and was responsible for the safeguarding of state establishments around the country.

He said that curiosity had led to him joining a Kik internet chatroom where he met the girl, saying that he presumed she was an adult.

When asked about his first impressions regarding her age, he replied ‘probably would have said 18-ish, 17/18 something like that’ and said that there were no questions about her age during their communication.

The defendant said their conversation progressed and then moved on to Snapchat, on which he claimed she had ‘a sexualised name’ that suggested she was ‘sexually confident’.

He said: ‘After Snapchat we used Skype a few times. She would tell me she had problems with her natural father and because of this she had been self-harming so I was trying to support her and encourage her to speak to her mum about the issues with her dad.’

When asked about seeing her face during a Skype call, Drummond confirmed he did and that the girl ‘looked well over the age of consent’.

He added: ‘She’s quite tall, almost as tall as me. I’d estimate she’s 5ft 7, fairly tall for a woman. She’s curvy and has the physique of an adult woman. At no point did I have any doubt she was under the age of consent.

‘She suggested I came to see her and I think it was the night of the 25th, quite late on. She said she was unhappy and wanted to see me. I thought we were leaning to becoming more of an item – a relationship.

‘We’d been communicating for a week or two and she gave me her address.’

Drummond said the girl told him where to park and he entered her home via the back door that had been left unlocked.

He said: ‘I walked in and she came running out and jumped on me and hugged me before leading me to the bedroom. We talked, I asked if she was ok, etc. We were sat on the bed and chatted for 15 or 20 minutes I’d say at a guess..’

Drummond then detailed his interpretation of events of how hugging progressed to kissing, foreplay and eventually consensual sex.

He said that after talking for a while they said their goodbyes and he embarked on the long drive home, adding that they carried on chatting as before afterwards.

Regarding the November 17 meeting he said: ‘She was talking about self-harming again and that she wanted to see me. I was concerned for her and didn’t want her to do anything stupid. I felt if I could give her any support I’d be happy to do that.

‘It was arranged fairly last minute and she said her stepfather would be in the house which is why she told me to come in through the window. I arrived very late into the evening, around 10-ish.’

Drummond claims the two ate Doritos before again kissing and having consensual sex, concluding ‘after we cuddled and I think I nodded off for a bit. I woke up in the early hours of the morning and we said our goodbyes and I left out the window again.’

The defendant described how the two continued chatting as before and that he sent her money to buy shoes to ‘cheer her up’.

Speaking after the case, Detective Inspector Paul Norlund, of Devon and Cornwall Police, welcomed the sentence in ‘this complex and serious case’.

He said: ‘The young victim has conducted herself courageously throughout this enquiry and shown a tremendous strength of character whilst giving evidence at the trial, to allow us to being this dangerous and callous offender to justice.

‘Whilst we hope that this verdict will allow her to find closure, this will be an ordeal that she will live with for a considerable time.

‘Peter Drummond is a disgrace to his family and the organisation that he was employed by.

‘He has refused to show any remorse for his premeditated actions, and put his victim both through the ordeal of these attacks, and forcing he to relive those painful memories in court.’

He asked for the girl and her family to be left in peace and given the space ‘that will hopefully allow them to move forward from this sad episode.’