Swarms of anti-vaccination protesters took to the streets across Australia rallying against the Covid-19 vaccine just days before it rolls out.

Covid vaccines, which have been proven to be safe and effective, are due to be rolled out across Australia from Monday and are not mandatory.

Controversial celebrity chef and conspiracy theorist Pete Evans also made an appearance at the Sydney march, without shoes and wearing a shirt that reads ‘Food is medicine’, much to the delight of protesters.

‘I don’t have the answers. No one is coming to save you except you,’ Evans cryptically told the protesters as he embarked on a rambling rant.

‘Each and every one of you has to stand up in whatever capacity you can.’

‘I begged people I thought could change the future of Australia. I f**king begged.

Controversial celebrity chef and conspiracy theorist Pete Evans also made an appearance at the Sydney march, much to the delight of protestors 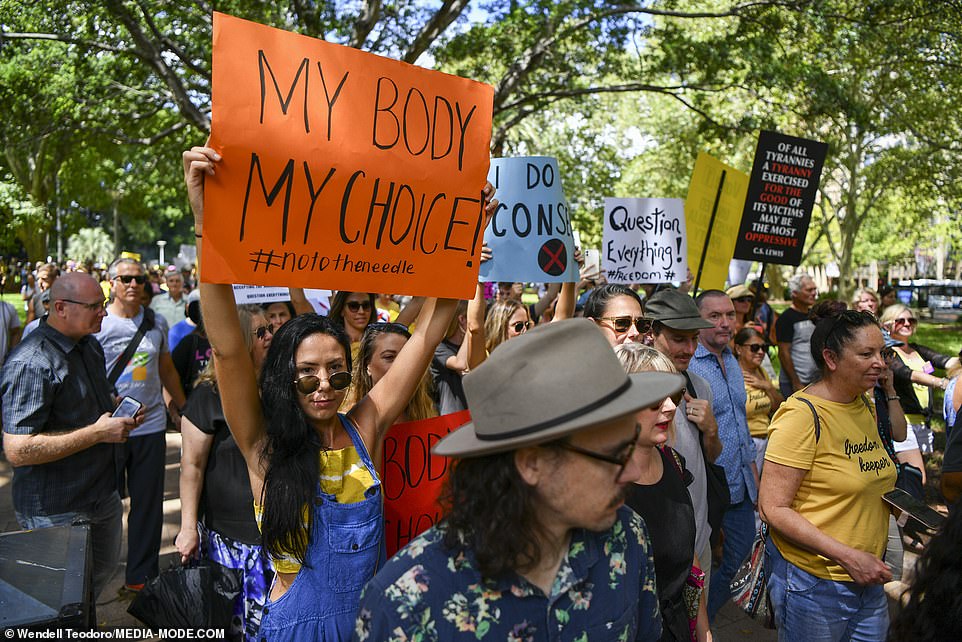 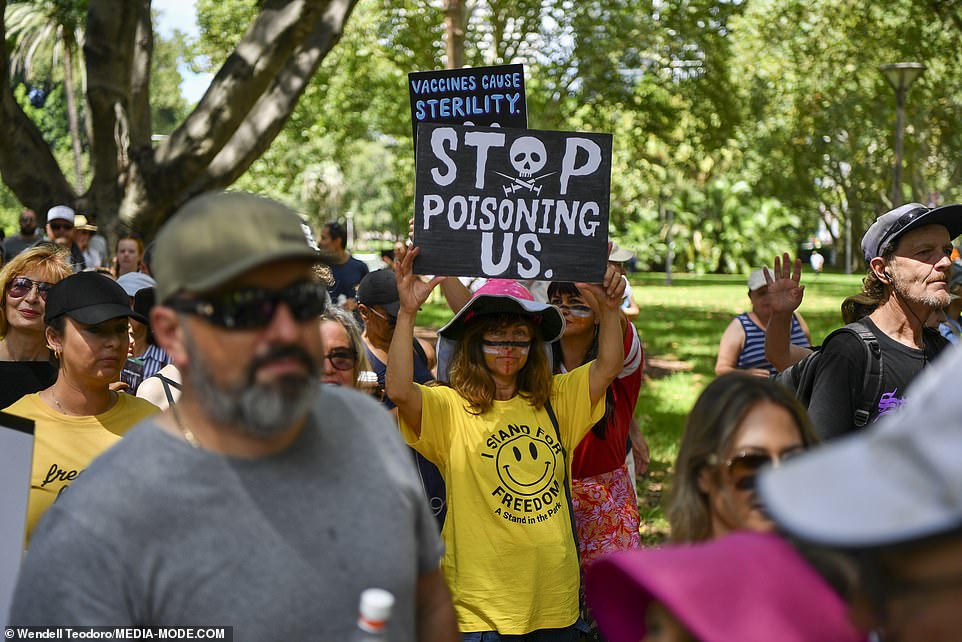 ‘But in the back of my mind there was this little guy going, ”you know you’re gonna have to do this”.’

Evans also reiterated that he will be running for federal parliament after joining forces with former One Nation senator Rod Culleton.

‘I’ve been invited to step in as a federal senator for the NSW seat,’ he said to the cheering crowd.

‘I’m not an expert in this but I will do my best and hopefully represent the rest of you to the best of my capacity.’

Chants echoed throughout the streets as protesters walked through the CBD among a heavy police presence, with arrests already taking place in Melbourne.

‘Our bodies, our choice,’ the group chanted in Sydney.

‘F**k Bill Gates! We hope that Bill Gates liar goes to jail,’ another chant rang out.

Almost all protesters were holding outrageous placards saying it’s their decision to not get the vaccine.

‘The decision should be mine not yours,’ one read.

‘Stop poisoning us,’ another placard at the march read. 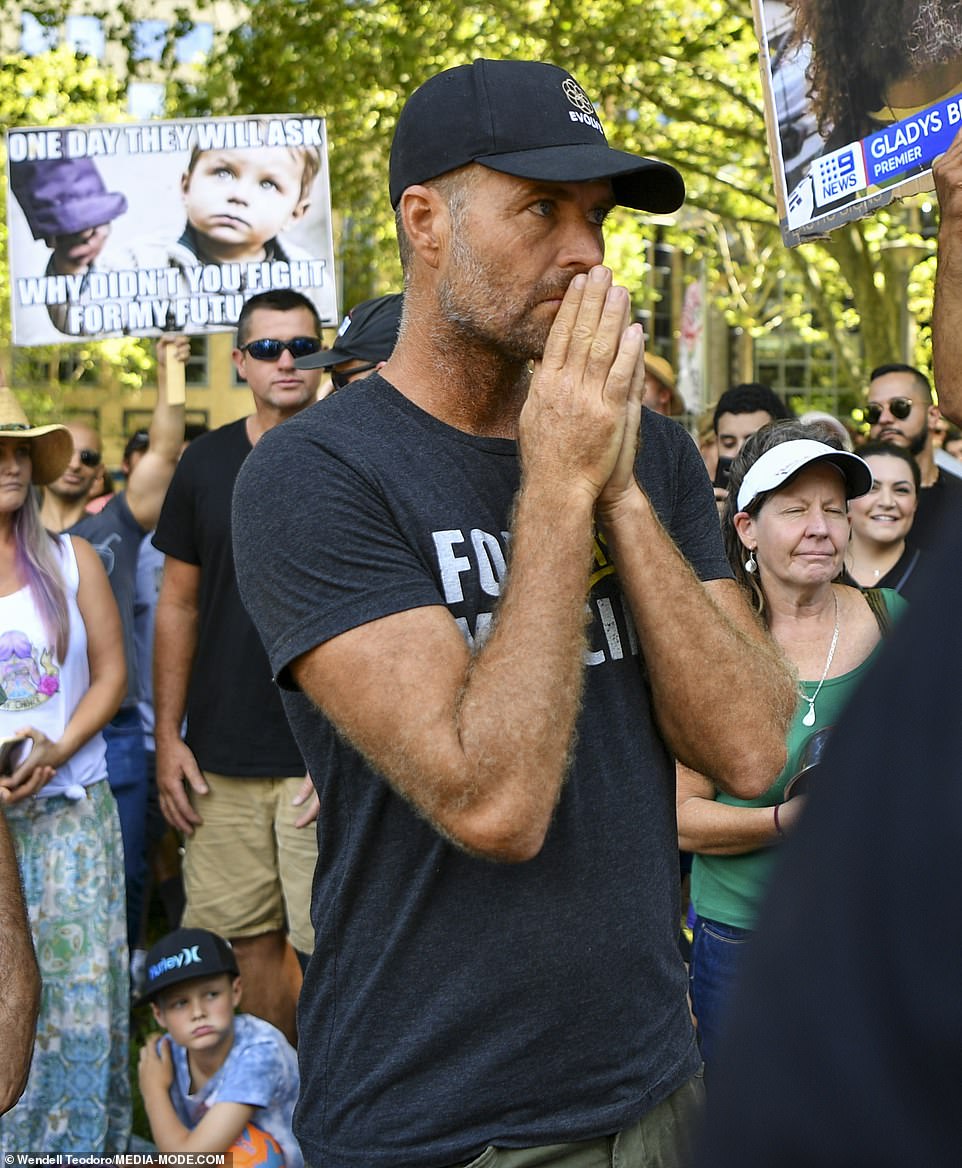 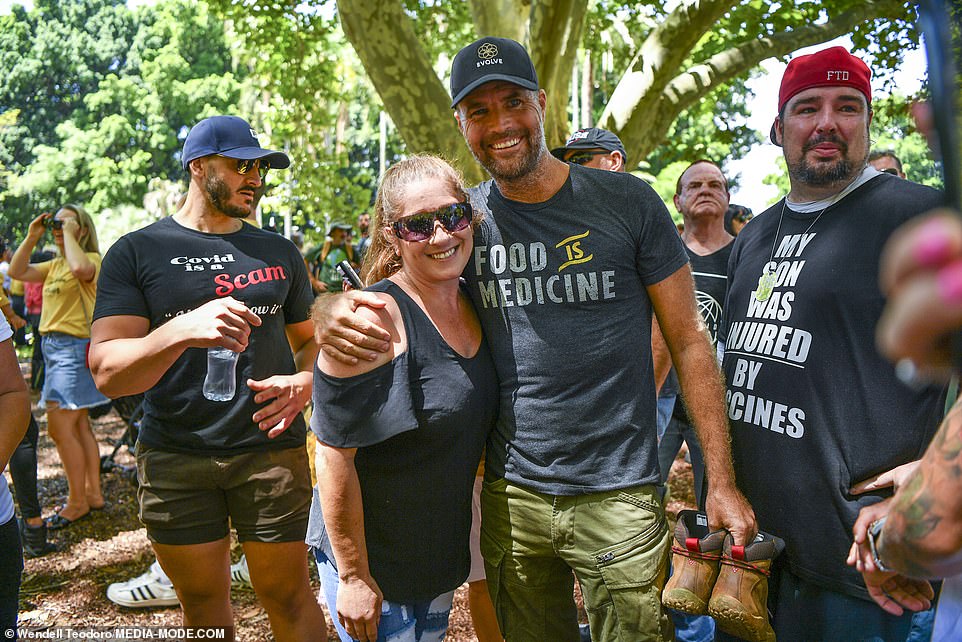 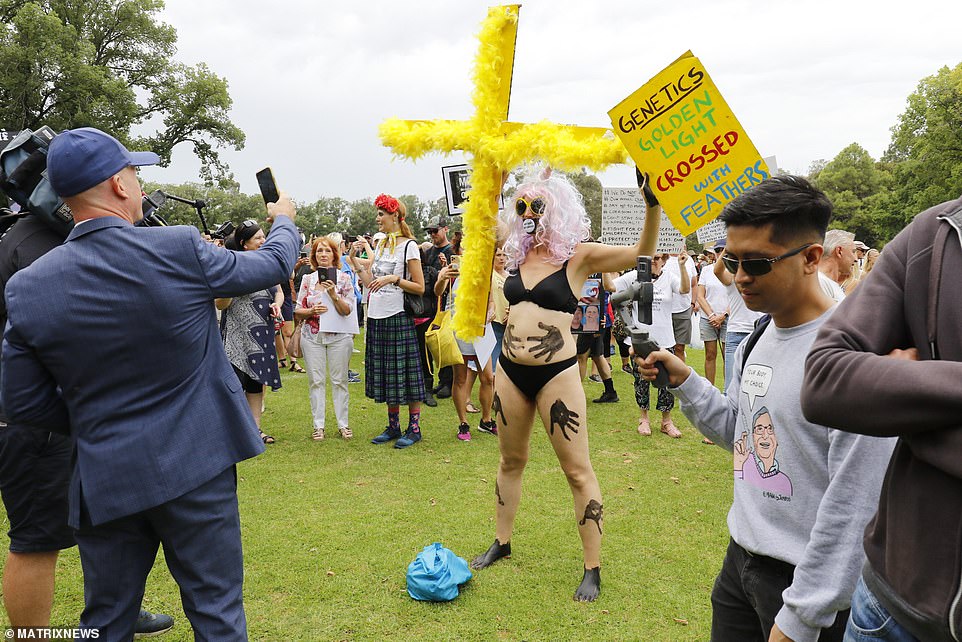 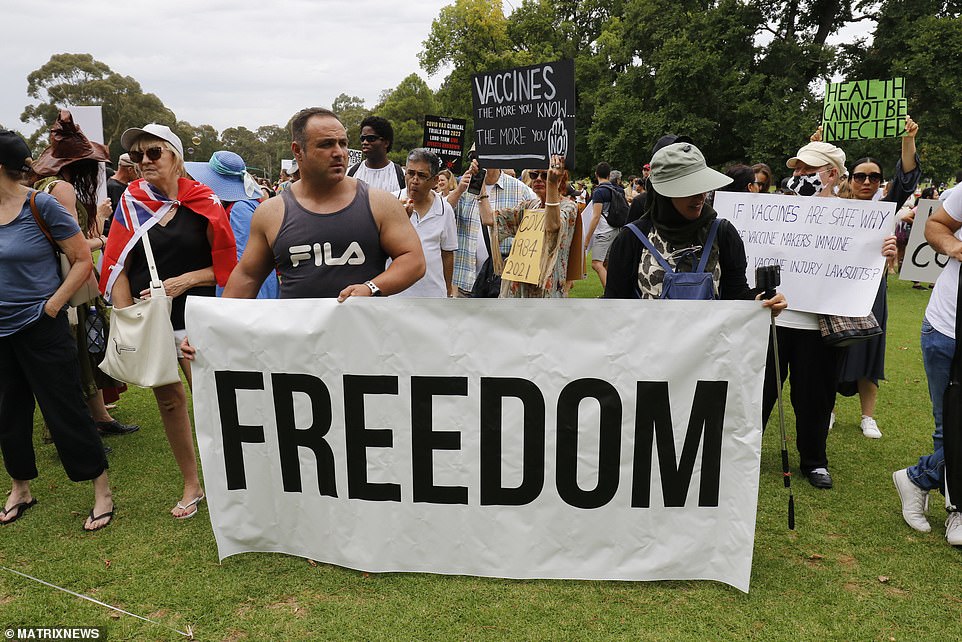 ‘No confidence in Dan,’ it read.

Another simply had the words ‘FREEDOM’ printed across it.

‘Health cannot be injected,’ another read.

A speaker, known only as Jackie, told protesters in Melbourne that there is no pandemic.

‘They are trying to keep us safe from a non-existent pandemic,’ she yelled to the crowd, Herald Sun reported. 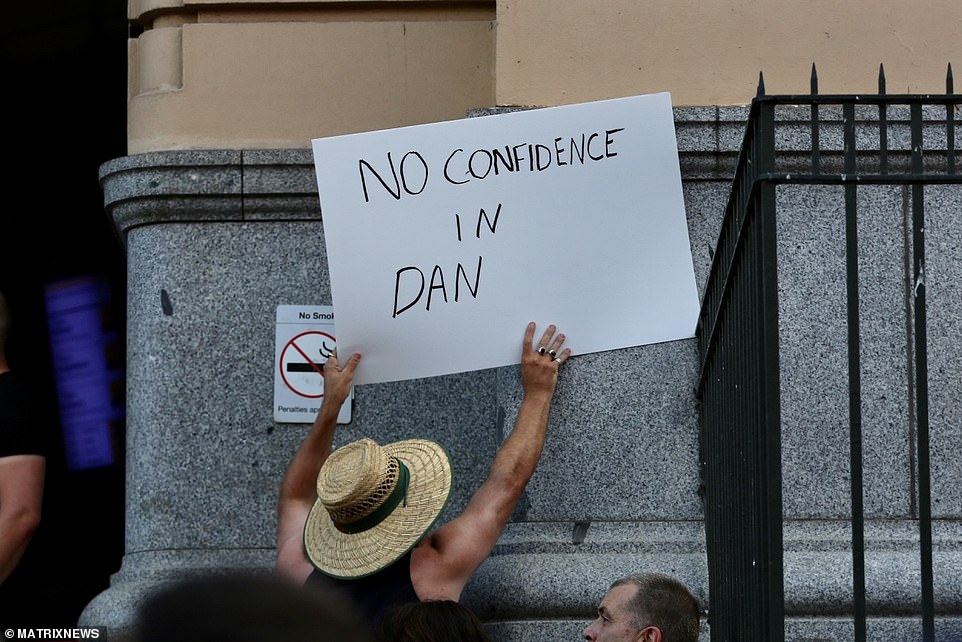 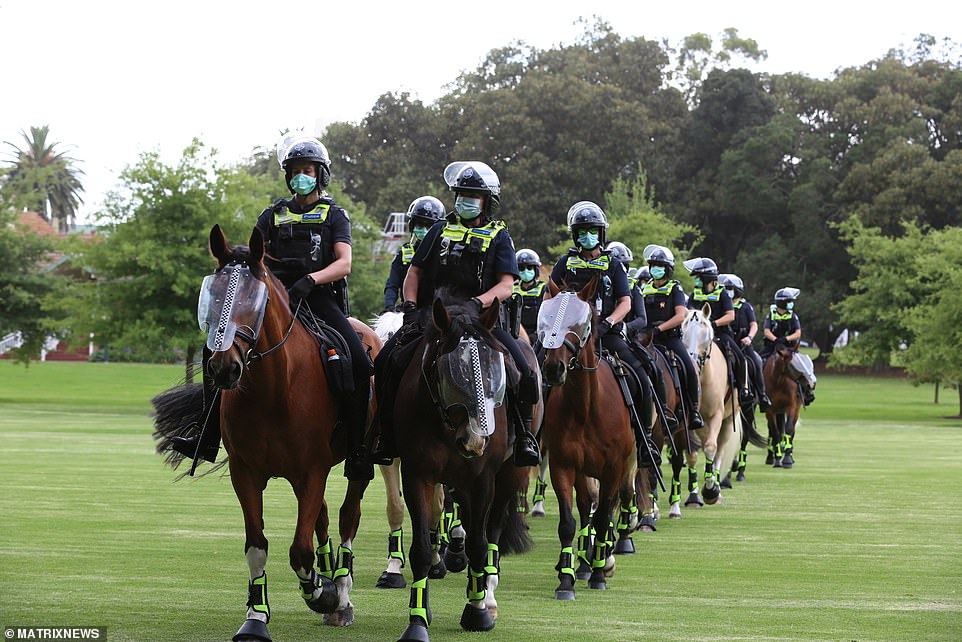 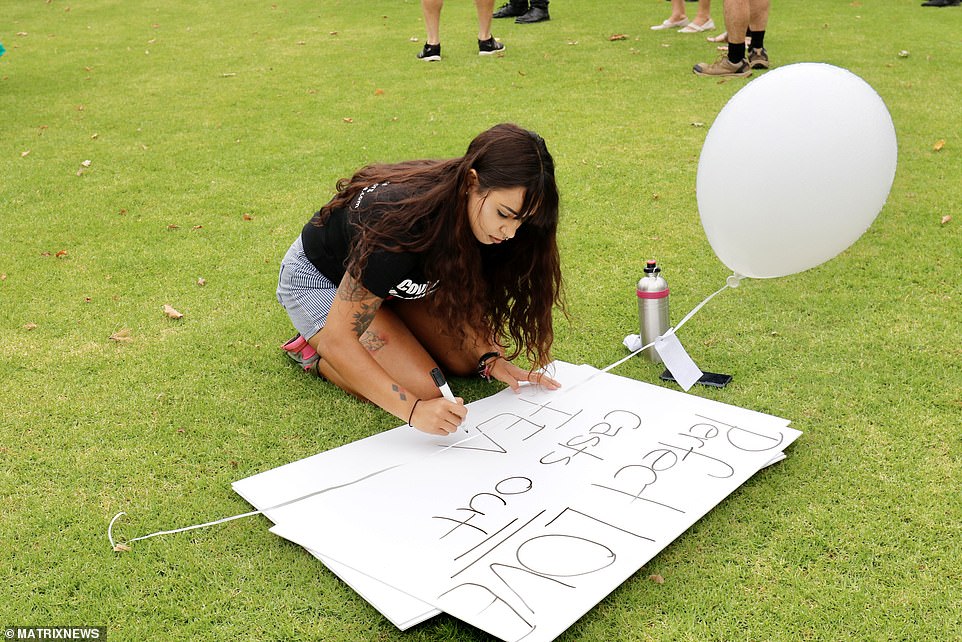 Covid-19 jabs will start on Monday as the nation pins its hopes on vaccines to forge a path out of the pandemic, which has seen Australia cut off from the rest of the world since March 20 2020.

The government is aiming for the roll out to be completed in October, sparking hopes of a return to normal life later in the year.

Asked if Australia could reopen to the world when immunisations are widespread, Scott Morrison said it was ‘very possible’.

‘But I’ve never got ahead of myself on this,’ he said.

Mr Morrison flagged significant changes to restrictions after jabs are delivered as evidence emerges about the success of programs overseas.

The prime minister said vaccines were likely to change coronavirus risks which could lead premiers to abandon snap lockdowns.

‘You only use a tool for as long as you need that tool,’ Mr Morrison said.

‘If you don’t need the tool anymore, you put it back in the box. We are getting to that point.’ 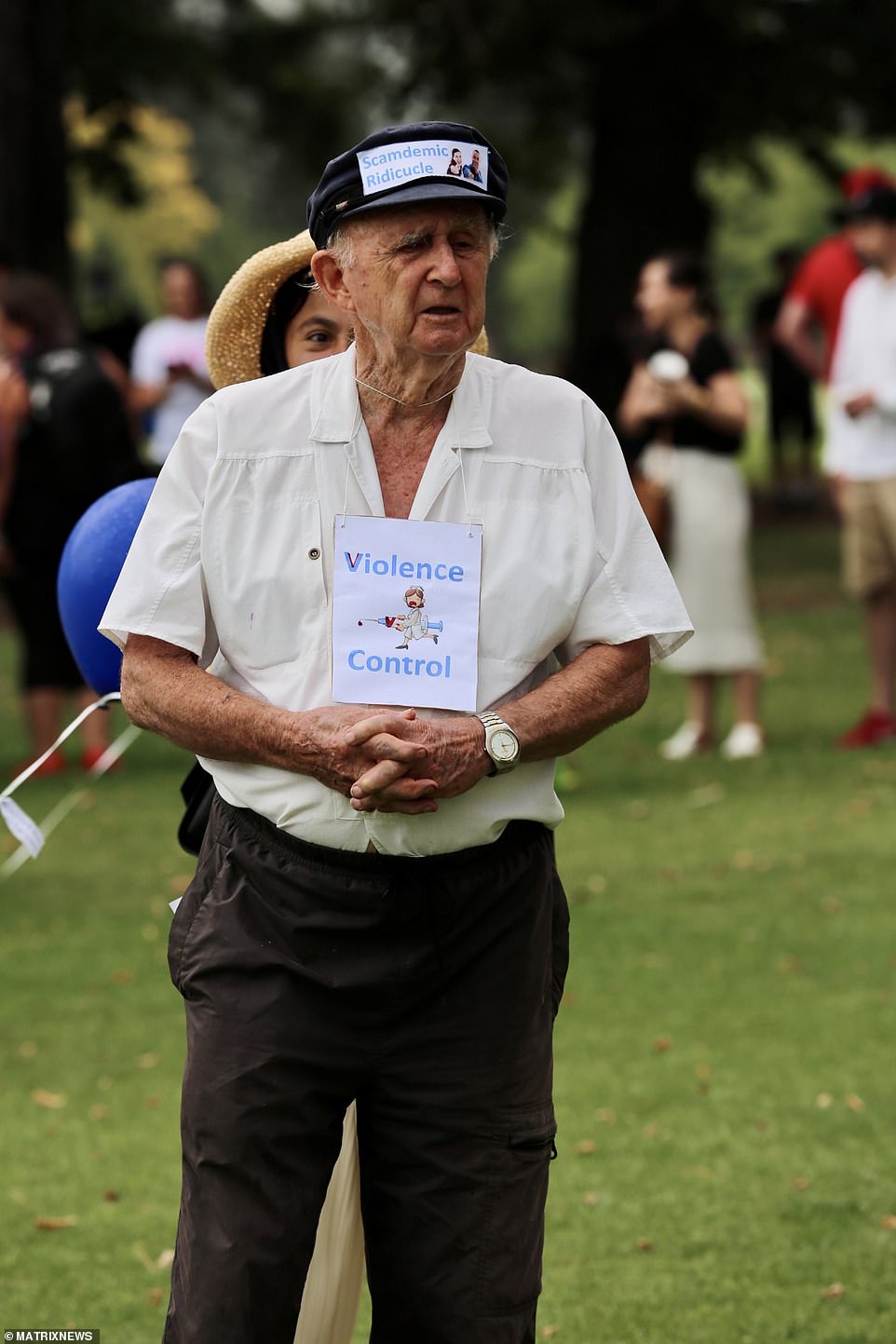 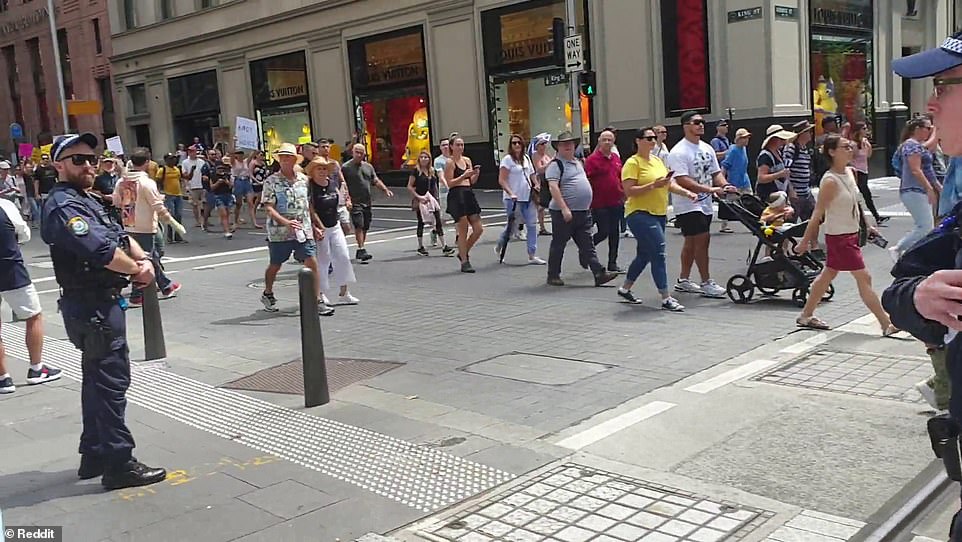 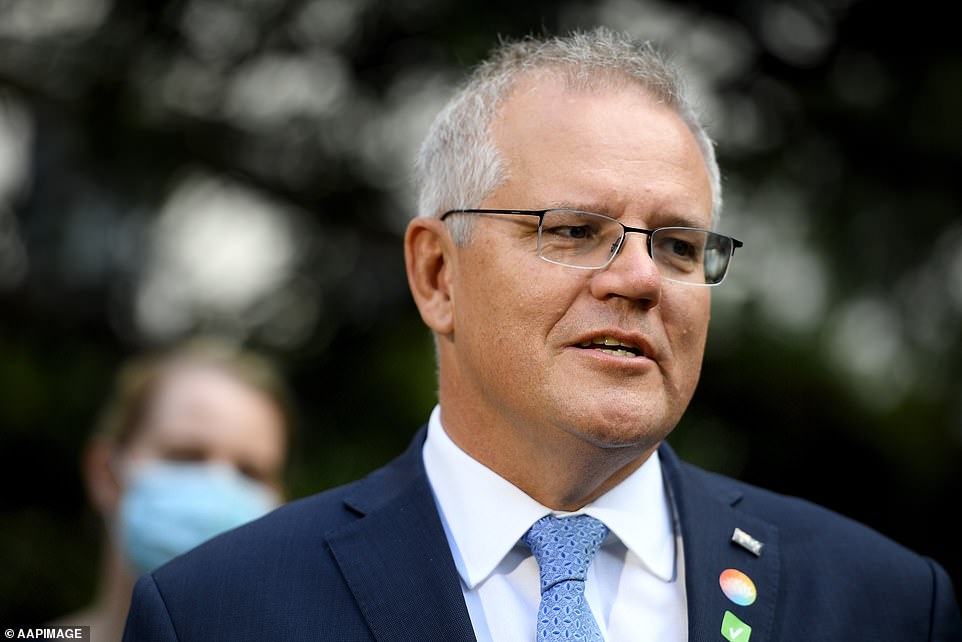 Hotel quarantine, border and frontline health workers will start receiving vaccinations next week but it won’t be mandatory.

Mr Morrison said federal and state health officers were monitoring whether to make vaccinations compulsory for some workers.

‘Should that be necessary, we would seek to do that on a nationally consistent basis exercised through consistent public health orders,’ he said.

Deputy Chief Medical Officer Michael Kidd is adamant authorities will be able to roll out the program despite enormous logistical challenges.

A flying squad of 500 nurse immunisers will be dispatched around the nation to vaccinate aged care and disability residents who are in the initial phase.

Hubs at major hospitals will also be ground zero for the Pfizer drug, which is first cab off the rank.

As the program expands, the extensive network of general practices and pharmacies will join the effort.

‘This is the largest mass immunisation program we’ve ever had in Australia,’ Professor Kidd said.

‘But Australia, of course, has been doing incredibly well at so many levels throughout this pandemic and we do expect to be able to roll out the vaccine.’ 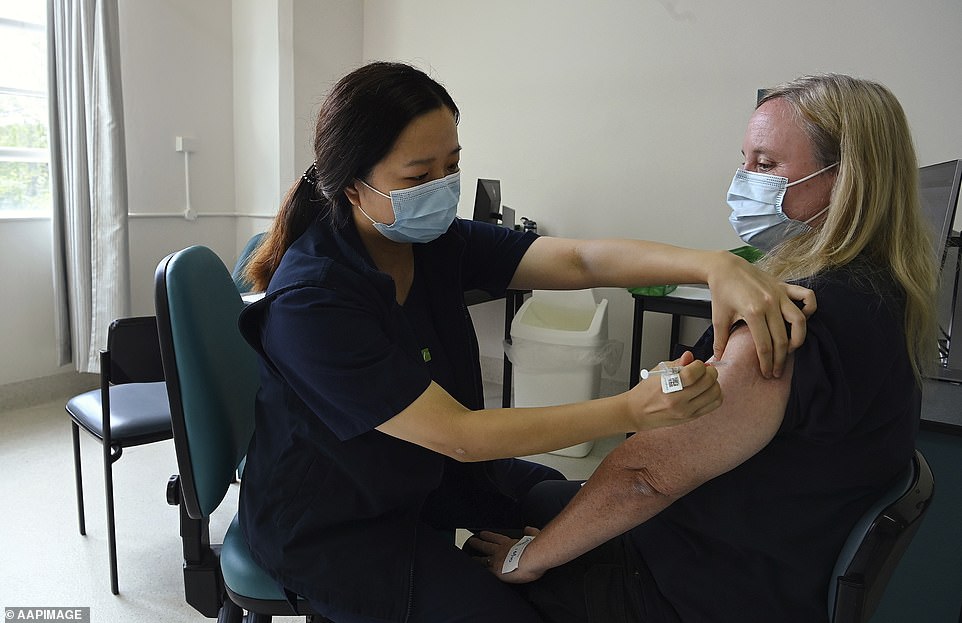 Vaccinations for coronavirus in Australia won’t be mandatory, sparking fears many will opt out of the jab

He said Australia would be ‘up there’ with nations like the UK and the US in achieving fast vaccine rollouts.

The government is facing increased hesitancy about coronavirus vaccines despite major advertising campaigns.

An Australian National University survey of more than 3500 people found a significant decline in the number of people likely to receive a vaccine.

In January, about 20 per cent said they probably or definitely would not get a coronavirus jab once a safe and effective shot was available.

That’s up from 12 per cent in August.

The Australian Bureau of Statistics found that in December, 73 per cent of people agreed or strongly agreed they would get a coronavirus vaccine.

Mr Morrison said plans were in place to reassure, calm and encourage people about vaccinations.