When Joshua Nerius came down with a rash and a high fever in May 2016, his doctors assumed it was a simple infection and prescribed him antibiotics.

But his condition didn’t improve and he went to the emergency room at Northwestern Memorial Hospital in Chicago, Illinois.

The doctor who saw Nerius told him that it seemed like he had measles and asked if he had ever been vaccinated.

Nerius, 30, said that when he texted his mother the question, she replied with thumbs-down emoji, reported CNN.

The software product manager eventually recovered and says he’s sharing his story as a warning that today’s parents have ‘no excuse’ to not vaccinate their children. 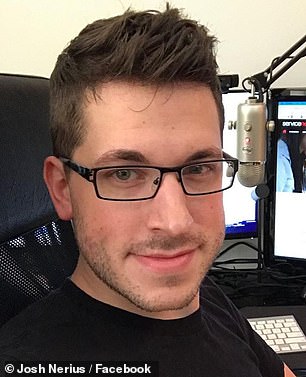 Joshua Nerius, 30 (left and right), from Chicago, Illinois, was infected with measles in May 2016 at his sister’s graduation. He learned at the hospital that he hadn’t been vaccinated as a child

Nerius told CNN that he caught measles when he attended his sister’s graduation at the Northern Illinois University College of Business.

According to the Illinois Department of Health, a guest from outside the US was at the ceremony with the disease.

‘I didn’t interact with anyone at that graduation besides my own family, so it was literally just me walking by someone,’ Nerius told CNN.

When someone with measles coughs, sneezes or talks, infected droplets are sprayed into the air, where other people can inhale them and are then infected.

Symptoms present themselves between 10 to 14 days after infection and include fever, cough, runny nose, and a total-body skin rash.

Nerius said that before he knew he had contracted measles, he was at a technology convention in Las Vegas, Nevada.

‘I was shaking hands with hundreds of people a day. I wasn’t contagious yet, but it’s sobering to think if the timing had been just slightly different, how many people I could have infected,’ he said.

He spent a week isolated at Northwestern Memorial and said he became so weak that he had trouble walking. His recovery was a months-long process.

‘I felt horrible,’ he told CNN. ‘It took a serious toll.’

Once common, the disease is now rare due to the MMR (measles, mumps, rubella) vaccine.

The Centers for Disease Control and Prevention (CDC) recommends children receive the first dose at 12 to 15 months old and the second dose at four to six years old.

Before the measles vaccine was available, more than 500,000 cases were diagnosed in the US every year, with about 500 annual deaths.

However, during a congressional hearing last week, heads of federal health agencies revealed the US has counted more measles cases in the first two months of this year than in all of 2017.

Nerius told CNN that he’s not angry that his parents, who believed in alternative medicine, didn’t vaccine him.

He also adds that during his childhood in the 1980s, his parents couldn’t go online to visit accredited sources. 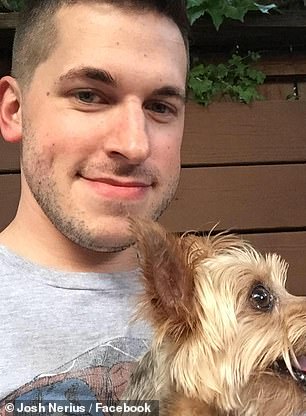 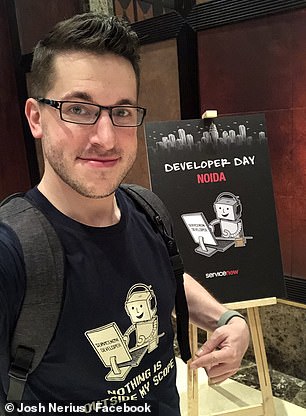 Nerius (left and right) spent a week in isolation and became so weak at one point that he had trouble walking on his own. He said his parents in the 1980s didn’t have the Internet to check accredited sources but that today’s parents have ‘no excuse’ 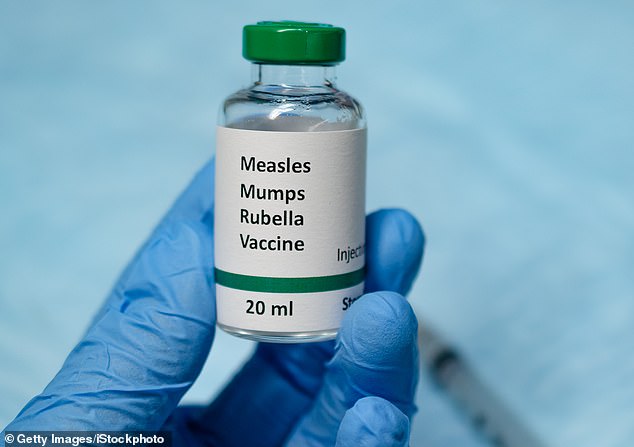 However, he argues that today there are so many sources a parent could visit that would confirm the safety of vaccines.

‘The science on this has been settled. It’s been solved,’ Nerius told CNN.

‘When I look at where we are today, with people who are willfully deciding to ignore the facts, it really frustrates me. I just don’t understand the mindset of people who want to spread fear.’

Experts say that, as diseases have become less common, people don’t remember a time from before vaccines were commonplace.

‘Because we don’t frequently see these diseases anymore, we don’t perceive the risk of not getting vaccinated,’ Julie Bettinger, a vaccine safety scientist at BC Children’s Hospital, told Today’s Parent.

‘But the diseases we developed vaccines for – like polio, which killed or crippled thousands of children – were selected precisely because they’re so severe.’

Public health officials warn that inoculations not only protect individuals, but also the community as a whole in what is known as ‘herd immunity’.

Nerius said he gets angry when he thinks about the measles outbreak, particularly in Washington, which has been fueled by anti-vaxxers.

‘It makes me so angry. My parents thought they were doing the right thing. They were persuaded by the anti-vaxxers,’ he said.