Funeral planner is forced to pull ad that joked ‘you know your dad likes Fat-Bottomed Girls’ while focusing on a woman’s rear end – but is it really that offensive?

A funeral planning ad that joked about a father’s preference for women’s behinds has been swiftly shelved after being accused of sexual exploitation.

Anticipate Life was forced to withdraw the TV spot on Saturday after it didn’t go down well with viewers who complained it was ‘gross’.

‘You know your dad likes Fat-Bottomed Girls. But do you know if he wants Queen played at his funeral?’ the ad jokes, while focusing on a woman’s rear. 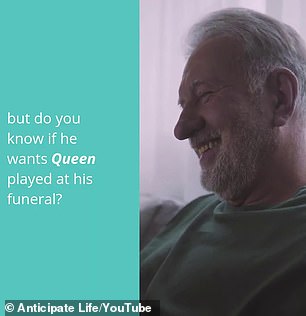 The ad goes on to say people need to talk to their parents about funeral planning ‘because you care and because it’s all about A Crazy Little Thing Called Love’.

Both are plays on words mixing song titles by British rock band Queen with encouragement for families to talk about funeral requests while they are still alive.

Ms Liszewski, who claimed she was planning her father’s funeral, told the company that to her the ad was ‘absolutely on the nose’.

‘I’ve been involved in planning my Dad’s funeral, the last thing we thinking about were his sexual preferences,’ she said.

She asked why the company wouldn’t develop a concept around another song mentioned in the ad text – Crazy Little Thing Called Love?

She argued that would have been better than ‘focusing on some young woman’s backside as some gross pun’.

Anticipate Life replied: ‘The ads were never meant to offend, and only meant to try and inject a little humour into a serious subject. 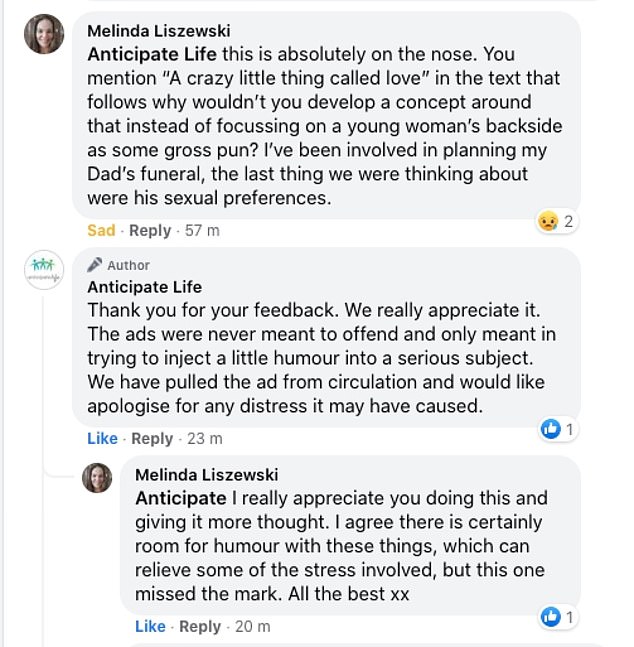 A screen grab of the complaint about the Anticipate Life funeral planning ad and the company’s response. The conversation took place on Facebook but has since been deleted

‘We’ve pulled the ad from circulation and would like to apologise for any distress it may have caused.’

It then deleted all social media posts related to the ad – although it left the YouTube video online.

‘The harms of sexist and sexually-objectifying representations of women are well-documented.’

‘Decades of research has concluded that the everyday sexualisation and objectification of women leads both men and women to have a diminished view of women’s competence, morality and humanity.’