Victims of paracetamol overdose could be saved by a new ‘antidote’ that protects the liver from irreversible damage.

Currently, emergency medication must be given within eight hours of an overdose, as after this time, the build-up of damaging chemicals released by the liver in response to high levels of the painkiller becomes impossible to counteract.

Damage to the organ then becomes permanent. Paracetamol, which reduces pain and fever, is one of the most commonly bought over-the-counter tablets and, additionally, 22 million NHS prescriptions are written for it each year.

Cold and flu medications often contain paracetamol, and experts say this can lead to people taking more of it than they intended.

Each year, more than 50,000 patients need hospital treatment for overdose – either accidental or deliberate – and there are 200 deaths.

The current antidote, N-acetylcysteine, prevents damage caused by a chemical called NAPQ, which forms in the liver when too much paracetamol is taken. NAPQ attaches to proteins within liver cells and causes them do die.

N-acetylcysteine works by ‘mopping up’ NAPQ. But after eight hours, too much has formed for the antidote to be effective.

The new antidote, Aladote, works in a different way, acting within the cells to protect them from the chemical chain of events that leads to the damage.

Early-stage trials suggest that it might be effective up to 36 hours after an overdose.

Toxicology expert Professor James Dear will be conducting the first trial on 24 patients in Edinburgh later this year.

The active ingredient in Aladote is already licensed as a treatment to prevent nerve damage in chemotherapy, and this should help speed its approval. 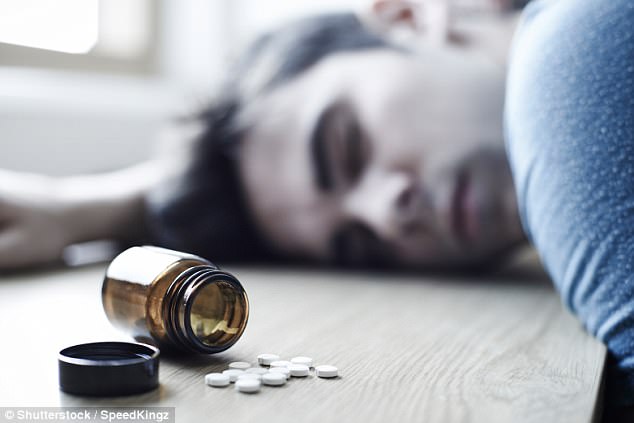 Each year, more than 50,000 patients need hospital treatment for overdose – either accidental or deliberate – and there are 200 deaths (stock image)

Dr Dear, who treats victims of paracetamol overdoses, said: ‘During the first 24 hours after poisoning, people usually experience few or no symptoms.

‘Therefore, many patients come to hospital at such a late stage that the current standard treatment is not sufficient to prevent acute liver failure.

‘The current treatment only limits the damage if we get in early, but sadly in many cases people don’t know they have overdosed or, if they do, they are not aware of the urgency of getting help.

‘Once the liver has been damaged beyond a certain point, there is no road back apart from a liver transplant – and patients die waiting for an urgent transplant or become so rapidly ill that it is too late to consider the possibility.’

A dose of paracetamol just slightly higher than the recommended amount per day can cause severe, and sometimes fatal, liver damage.

Intentional overdose of paracetamol is the most common method for suicide attempts among adolescents aged ten to 19.

The number of deaths from poisoning has halved since pack sizes were reduced from 32 to 16 in 1998.

But larger amounts can still be bought from a pharmacy. Prof Dear said: ‘It is distressing to be faced with a person whose liver has been wrecked and there is nothing we can do.

‘Anyone who thinks they have taken an overdose should get to A&E as quickly as possible.

‘If it happens late in the evening, don’t think waiting until morning will be OK. The toxic effect often occurs before the symptoms.