Antonio Banderas and girlfriend Nicole Kemple were among the high-profile people to attend the Starlite Porcelanosa gala in Marbella, Spain on Sunday.

The acclaimed film star has chaired the annual charitable event along with Sandra Garcia Sanjuan, according to the Andara Villas website.

The gala brings together people from across the business, social and cultural communities in Marbella to raise funds for the Starlite Foundation for the last 13 years.

Charity event: Antonio Banderas, 61, and his girlfriend Nicole Kempel, 40, had photographers buzzing when they arrived for the Starlite Porcelanosa gala in Marbella, Spain on Sunday

Looking like the picture perfect couple, Banderas stepped out on to the red carpet ahead of the event in a white blazer that was matched with black trousers and a white shirt and black bow tie.

He also added a pair of shiny black leather dress shoes to his ensemble, and had his salt-and-pepper hair cropped short.

At times, the Academy Award-nominated actor also sported a pair of stylish sunglasses. 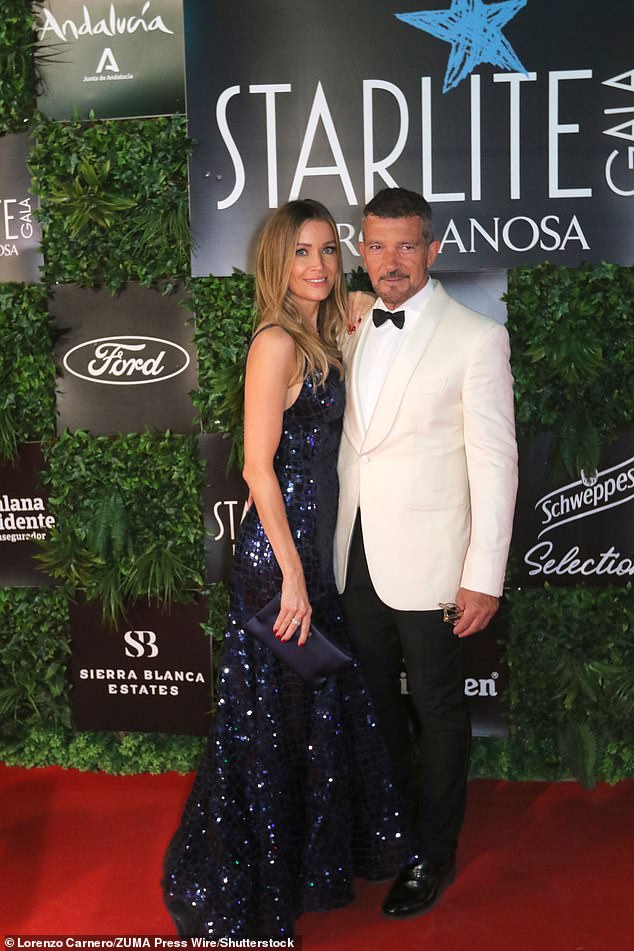 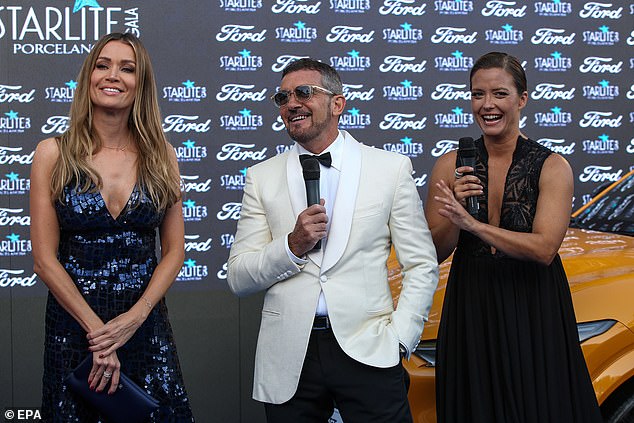 Handsome couple; Banderas looked handsome in a white and black suit, while Kimpel stunned in a blue sequin gown ; they were joined by journalist Maria Casado soon after arriving 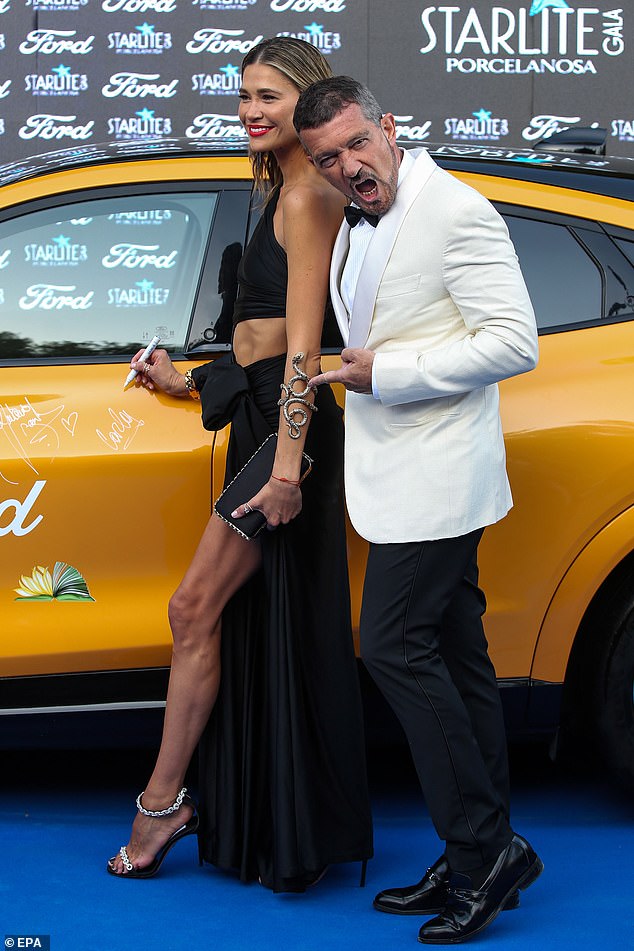 Playful: The Spanish actor got playful with Argentinian model Carla Pereyra moments after arriving for the Starlite Gala in southern Spain 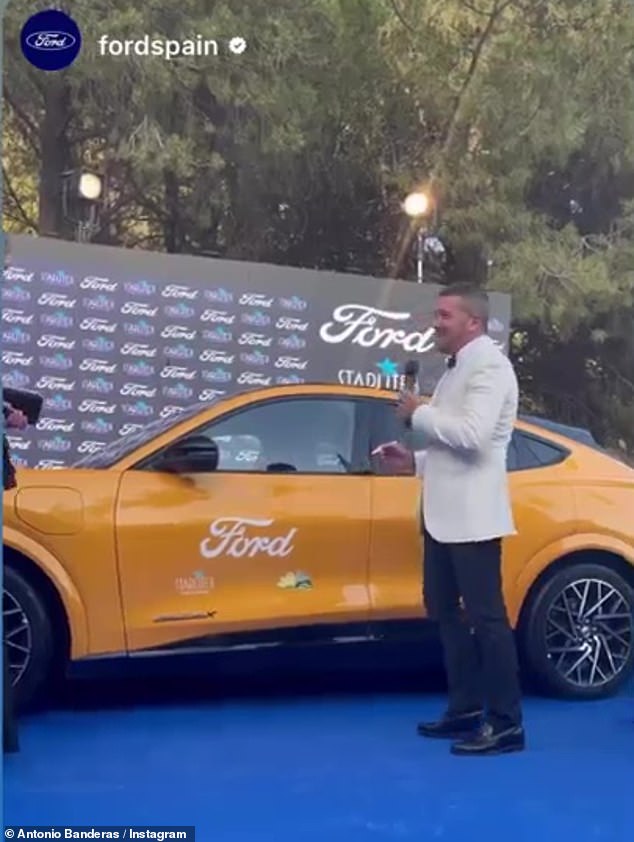 Socializing: There were a number of photos and video taken at the gala that were posted on Banderas’s Instagram page 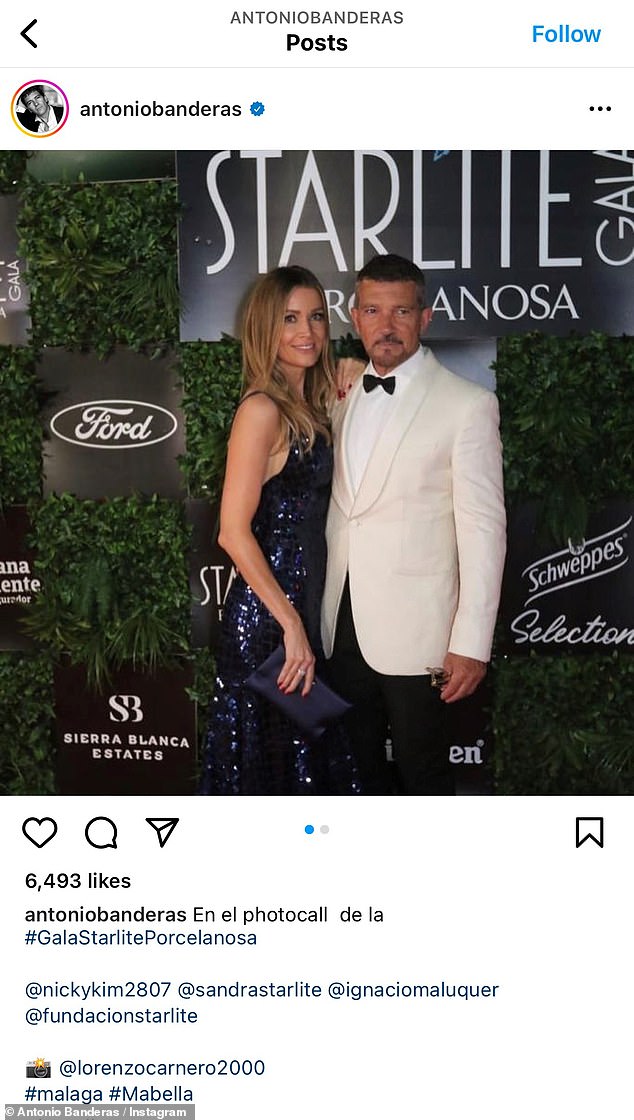 Promo mode: ‘In the photocall of the #GalaStarlitePorcelanosa,’ Banderas wrote in the caption of his Instagram post, which showed he and his lady on the red carpet

Kempel, 40, looked dazzling in a blue, full-length sequin gown, while standing by her man’s side.

The sparkling number came complete with a plunging neckline and hugged her toned figure from just below her waistline all the way up to top portion.

On this day, she had her light brown tresses styled long and draping over her shoulders with a part in the middle.

Banderas also posted a couple of photos from their time on the red carpet on to his Instagram page. 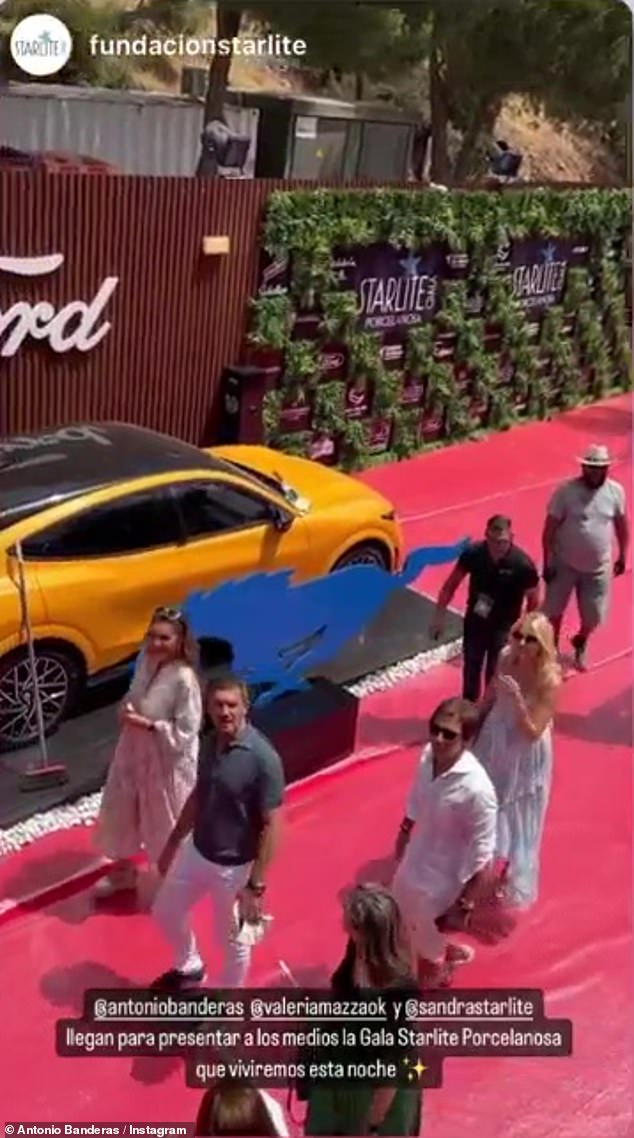 Gala: The Academy Award-nominated actor got a walk-through of the event in the afternoon 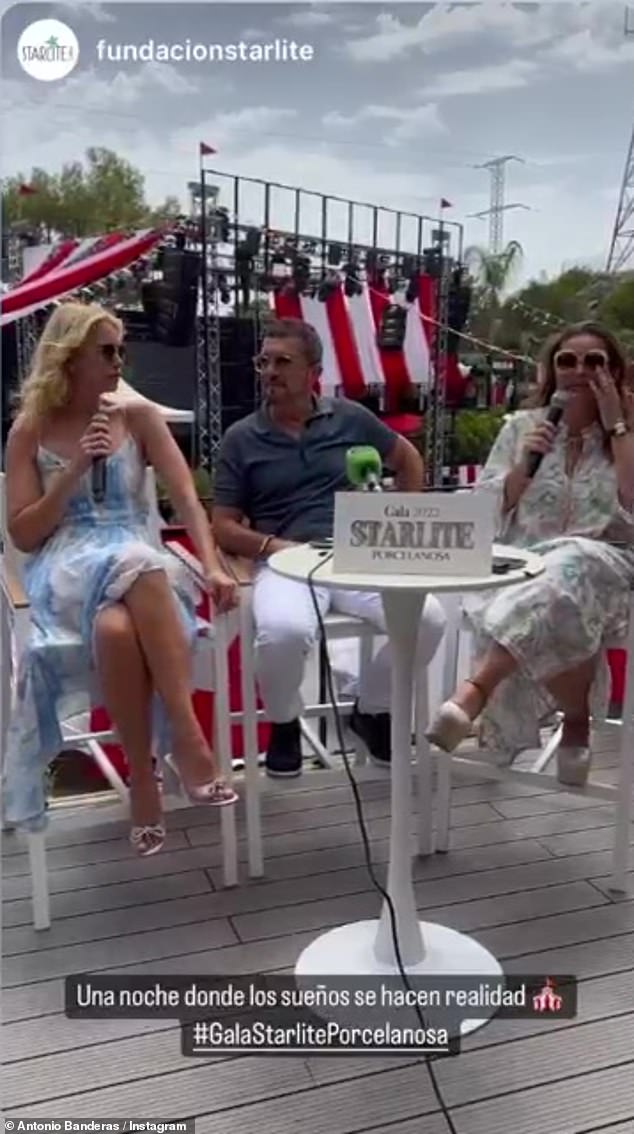 Working it: The Evita star also sat down for interviews ahead of the event

The event was hosted by showbiz luminaries as Valeria Mazza, Lujan Arguelles and Ivan Sanchez.

Eventually, the participants discussed and ultimately committed to supporting social and humanitarian initiatives, including projects headed by famous faces such as Alejandra Gere.

Mrs. Gere, who was recognized for her humanitarian work, attended the annual festivities with her movie star husband, Richard Gere.

The actor, 72, cut a dapper figure in a black suit that he teamed with a crisp white dress shirt and bow tie as he walked the red carpet with his wife, 39, who stunned in an elegant yellow gown.

After the business concluded, the attendees were treated to musical entertainment provided by Spanish, Cuban and Mexican acts including Chucho Valdes and Chui Navarro. 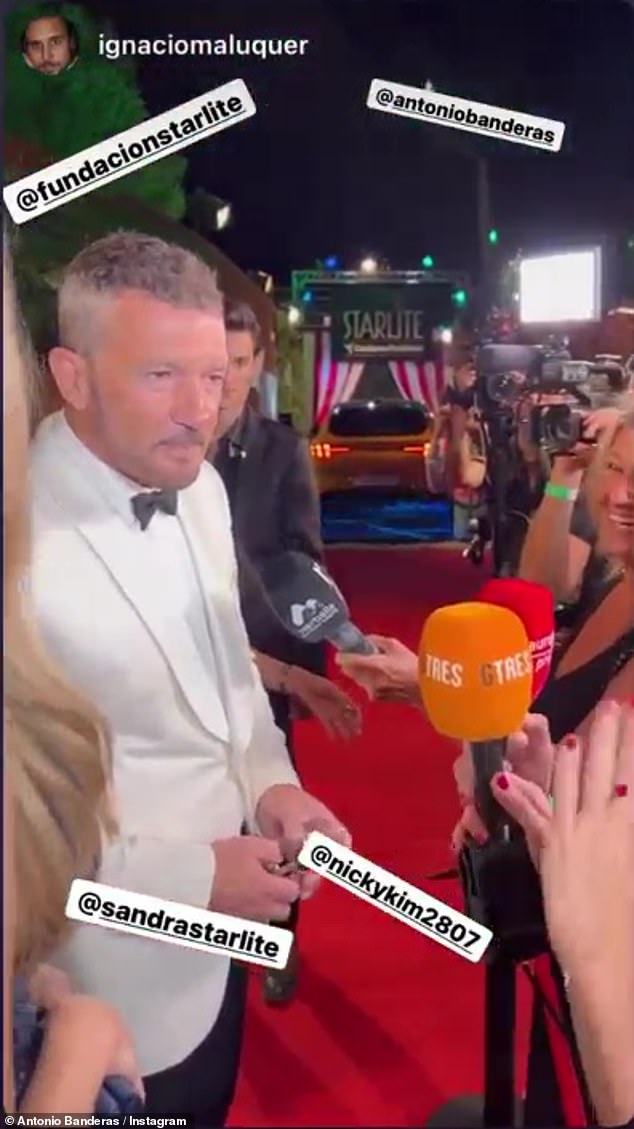 Media hype: After striking a number of poses with his lady on the red carpet, Banderas also met with the media and took some questions from journalists covering the gala 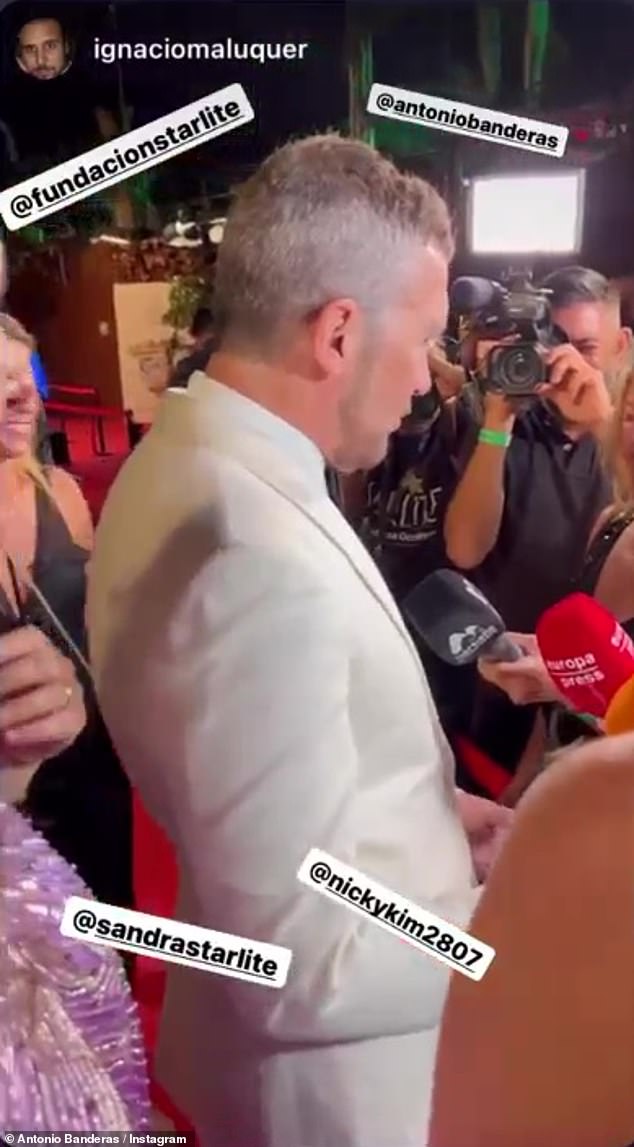 Star power: Guests were glued to Banderas when he et with the media on the red carpet 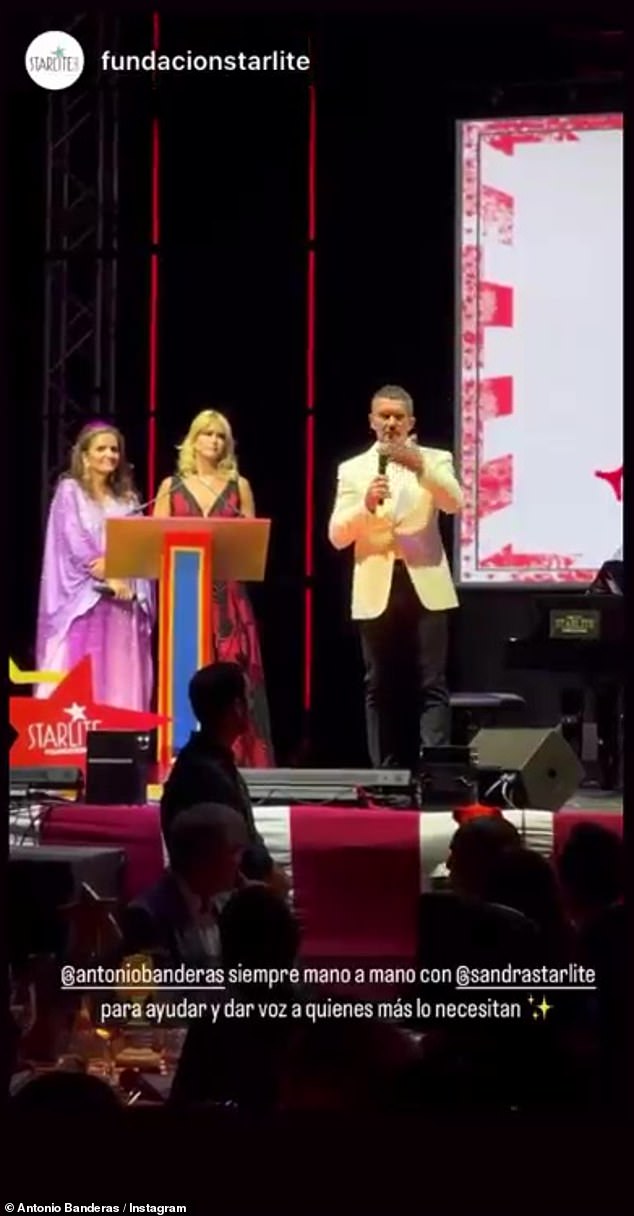 Charitable: Ultimately, the participants discussed and committed to supporting social and humanitarian initiatives, including projects headed by famous faces such as Alejandra Gere, who was on hand with her movie star husband, Richard Gere