Free agent wide receiver Antonio Brown is expected to file nine grievances with the NFL Players Association to recoup money from his three-year, $50 million contract with the Oakland Raiders and his one-year, $15 million deal with the New England Patriots, that included a $20 million team option for the 2020 season.

Brown was released in Oakland amid a dispute with the front office on September 7, only to join the Patriots, who cut him on September 20 amid accusations of rape and sexual assault against the 31-year-old NFL star.

NFL free agent Antonio Brown is expected to file a record nine grievances against the Oakland Raiders and New England Patriots in his attempt to recoup as much of the $61 million in salary guarantees he feels he is owed following his release from both franchises within the last month.

According to ESPN, Brown and the NFL Players Association (NFLPA) will file nine grievances and appeals, which is the most ever by a single player at one time. Brown’s demands include $29 million in salary guarantees that were voided by the Raiders before he was released in Oakland on September 7.

Brown ultimately agreed to a one-year deal worth as much as $15 million with the New England Patriots hours later, but has since been released by the defending Super Bowl champions amidst accusations of sexual assault and rape.

He is also seeking his full $9 million salary bonus and $1 million in salary guarantees from the Patriots, among other demands.

In a lawsuit filed by his former personal trainer Britney Taylor on September 10, Brown was accused of rape and two instances of sexual assault in 2017 and 2018.

He has denied the accusations.

Although Brown’s agent Drew Rosenhaus has acknowledged that he and Brown have been aware about the possibility of a lawsuit, the question of whether or not the Patriots were informed remains open.

In an interview with ESPN, Rosenhaus declined to say whether he discussed the potential for a lawsuit against his client when the two parties agreed to the deal on September 7. (Officially the deal was signed September 9)

The NFL Network reported that the Patriots would not have signed Brown had they known about the potential for a rape lawsuit.

On September 7, Antonio Brown agreed to a one-year deal worth as much as $15 million with the New England Patriots hours. He has since been released amid an allegation of rape 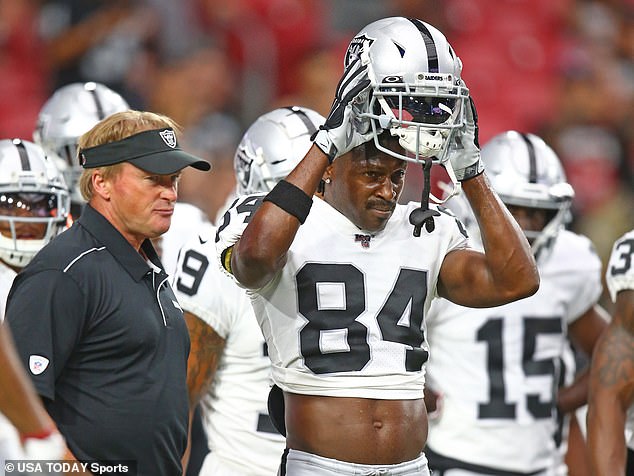 Brown has since been accused of sexually harassing another woman in 2017, when he hired her to paint a mural in his home, where he disrobed and approached the unidentified artist with only a hand towel over his genitals.

In response to the Sports Illustrated report of the incident, Brown sent menacing text messages to the unidentified accuser and he was subsequently released by the Patriots on September 20.

The Patriots were Brown’s third team since March, when he was traded from the Pittsburgh Steelers to the Raiders, who made him the highest-paid receiver in football with a three-year, $50 million deal.

Things went awry for Brown in training camp, where he missed time after injuring his feet in a cryotherapy machine before sitting out due to a dispute with the NFL over his helmet.

When the issue was finally resolved, Brown was fined by the team for missed practices, prompting a heated confrontation between him and general manager Mike Mayock.

Brown apologized to teammates the following day, but when the team consequently fined him for ‘conduct detrimental to the team,’ and voided $29 million in salary guarantees, he demanded his release.

The Raiders cut Brown on September 7 before he even played a single regular season game for the team, although he did make a preseason appearance for Oakland.

His tenure in New England was only slightly more productive. Brown caught four passes including a touchdown in the Patriots’ Week 2 win over the Miami Dolphins.

Following his release from New England on September 20, Brown tweeted that he was done with football because owners ‘can cancel deals’ and ‘do whatever they want at anytime.’

Rosenhaus, Brown’s agent, believes his client will be back in the NFL if and when the league clears him of any wrongdoing.

‘I believe that Antonio wants to continue his career in the NFL,’ Rosenhaus said on retired NFL veteran Warren Sapp’s podcast.

‘It’s my hope, it’s Antonio’s hope, that he’ll be back playing as soon as possible,’ Rosenhaus added.

Rosenhaus reiterated Wednesday that teams have interest in Brown, and he expects the wideout to continue playing.

‘I have had discussions with a few teams that are very interested in him and want to know about his future and what’s going on with the NFL,’ Rosenhaus said on the podcast. ‘Hopefully, when that is all resolved, Antonio will be able to continue his Hall of Fame career.

The Patriots may have no choice but to pay Brown the signing bonus, five experts told Yahoo Sports.

The key to the dispute lies in the league’s Collective Bargaining Agreement, which lists four specific reasons that a player would forfeit a signing bonus. Those reasons are:

League sources say that whatever the Patriots put into their contract with Brown, those four conditions are the only ones that the CBA allows for the forfeit of a signing bonus.