Inter Milan currently sit second in the Serie A table, just one point behind leaders Juventus, having lost just one match from their opening 11.

In the Champions League it is, admittedly, less rosy but hardly an irretrievable situation. If they beat Slavia Prague at the end of the month, they will still stand every chance of making the last-16.

The two teams above them, Barcelona and Borussia Dortmund, will take points off one another and given how shaky Barca have been this season, there’s every chance Inter could do them over at the San Siro on matchday six. 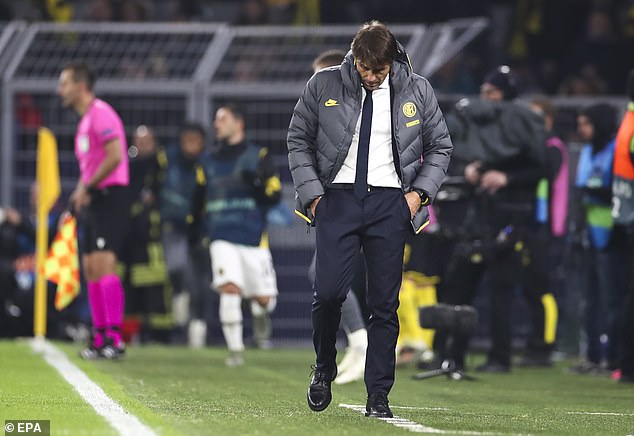 On a difficult evening, Conte saw his side surrender a two-goal lead to lose 3-2 in Germany

It’s a state of affairs that hardly screams ‘crisis’ but that was very much the impression Inter manager Antonio Conte was giving off on Tuesday night.

Conte was raging after watching his side throw away a two-goal lead to lose 3-2 to Dortmund at the Westfalenstadion and frustration at the result quickly mutated before the TV cameras into an astonishing rant about their general situation.

He suggested the club as a whole ‘got it badly wrong’ when planning out the season, his players lacked the strength of character and knowhow to deliver trophies, and that his squad depth was painfully thin.

‘Apart from Diego Godin, these players haven’t won anything and lack experience,’ Conte fumed. ‘We have too limited a squad to face both Serie A and Champions League football this season.

‘I mean limited in terms of numbers and quality. Some players have to be on the field constantly and in the long run, you do pay for that. I am furious because this cancels out the good work.’ 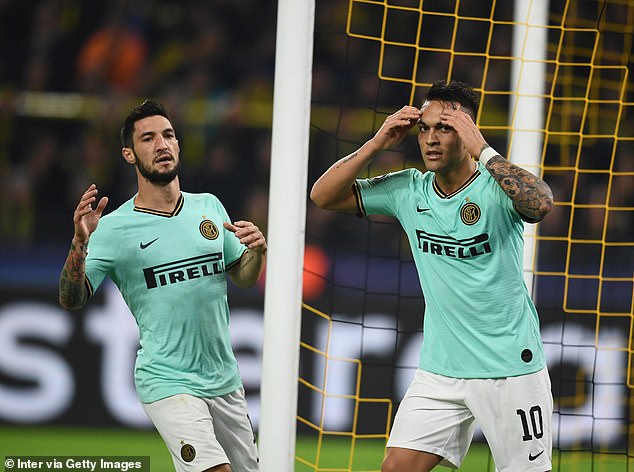 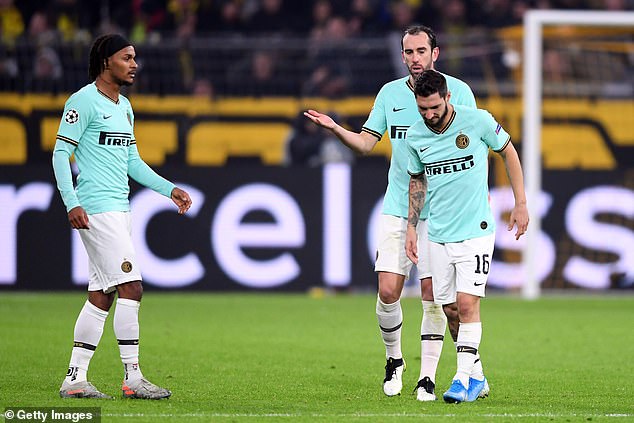 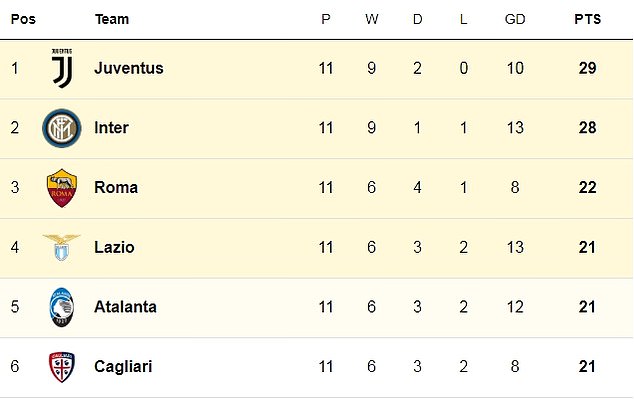 Even taking aside the fact Conte’s blood pressure was high following his team’s capitulation, some of his comments are difficult to reconcile with reality.

Inter have a first-team squad pool of 27 players, an identical figure to Juventus and Napoli, and five more than Atalanta, their three Italian compatriots in this season’s Champions League. So Inter are no worse off than their rivals.

He may have a point about a lack of winners in his dressing room. Conte singled out Godin, the 33-year-old defender who won the Spanish League with Atletico Madrid as well as two Europa Leagues.

Alexis Sanchez won the Spanish title with Barcelona and two FA Cups with Arsenal, but Conte is right, there wouldn’t be much precious metal if his squad pooled their medals.

But Conte’s remarks give the impression Inter didn’t recruit anyone over the summer and this is completely false.

The club’s Chinese owners backed their new manager to the tune of £140million in the summer, recouping a mere £42m from sales. 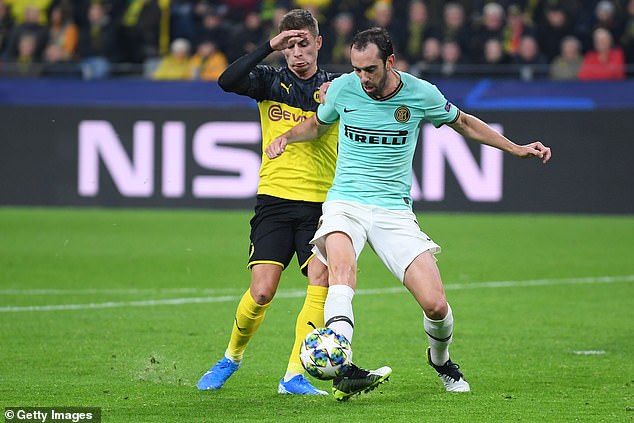 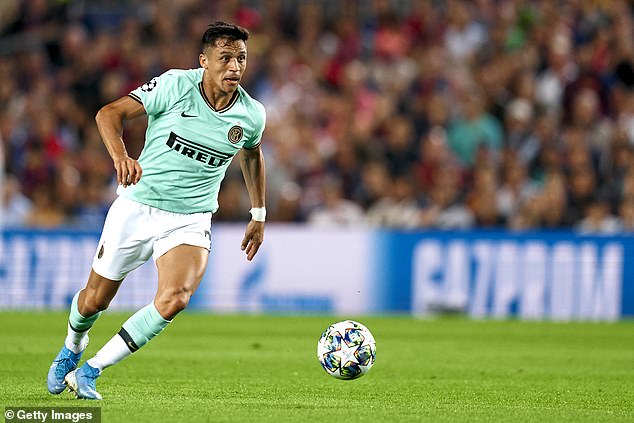 Then there is the wages of Alexis Sanchez, taken on loan from Manchester United, to finance. But even this was a good deal, with United paying £300,000 of his £400,000-a-week.

So Conte cannot suggest he wasn’t backed in the transfer market, even if he has reservations about the pedigree of some of those brought in.

But, it has emerged, Conte didn’t get three of the transfer targets he really wanted and that seems to have set off a short fuse.

According to Gazzetta dello Sport, the manager expressly asked the Inter hierarchy to go out and sign Roma striker Edin Dzeko, the Barcelona midfielder Arturo Vidal (who played under Conte at Juventus) and the then Tottenham striker Fernando Llorente (who also played for Juventus under Conte), who would sign for Napoli. 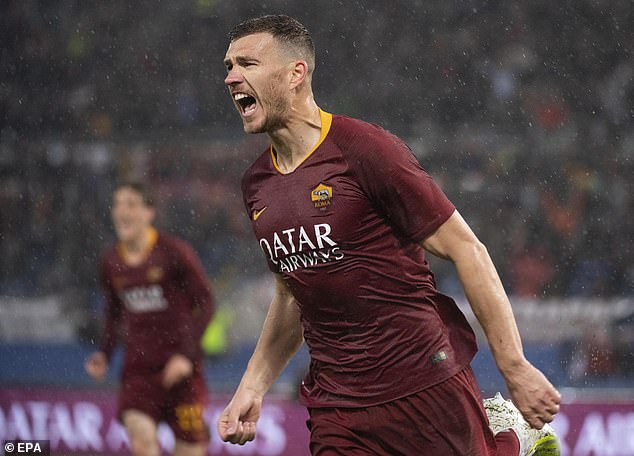 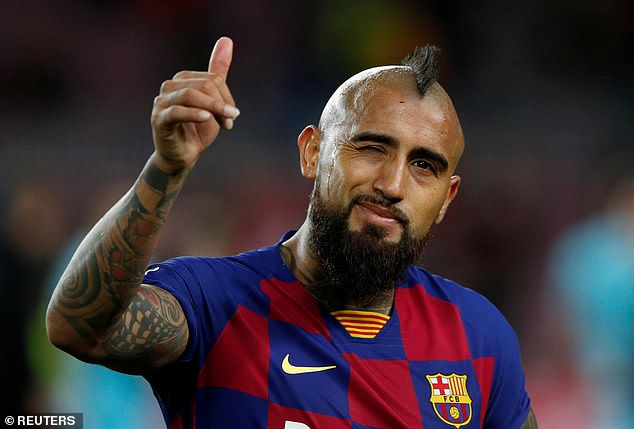 Arturo Vidal was another Conte target, having worked well under the manager at Juventus

The move for Dzeko, who would have cost around £15m, wasn’t closed because of uncertainty over the future of Mauro Icardi.

Conte reportedly still holds out hope that a move for Vidal could be completed in the January window but the trio would have helped supply the winning pedigree he feels is lacking.

Later in his interview, Conte namechecked Nicolo Barella, on loan from Cagliari, and Stefano Sensi, on loan from Sassuolo as a counterpoint to Godin. But it’s hardly their fault if they’re come from lesser clubs who haven’t won anything.

It appears Conte was unhappy about the quality and quantity of the squad he inherited from Luciano Spalletti first of all and then dissatisfied about the pedigree of those brought in. 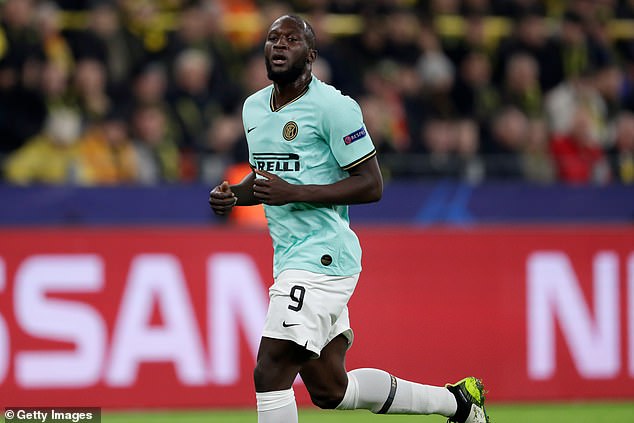 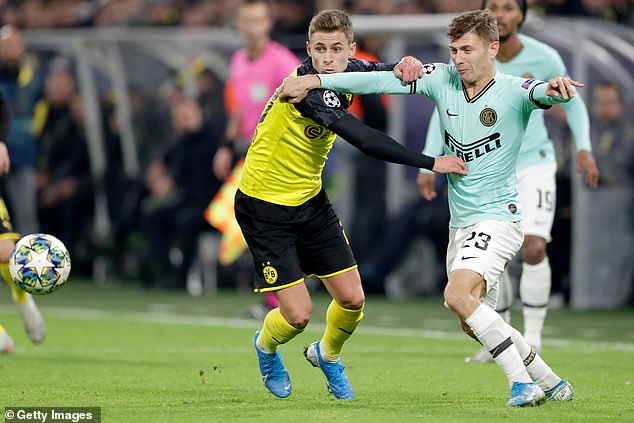 Nicolo Barella (right) was another summer acquisition, taken on loan from Cagliari

Yet he also ruled out making acquisitions in the January transfer window. ‘I am not asking the club for anything, these are the players and we go into battle with these players,’ he said.

‘The club will make its evaluations, I am just saying all of us got it badly wrong when planning for this season.’

What comes across most strongly, however, is Conte’s shortage of patience.

He is a manager accustomed to gaining speedy results. He won promotion into Serie A with Siena in his first season there. He won the Scudetto with Juventus straight away, completing the 38 rounds of the league season unbeaten.

And Conte won the Premier League title in his first year at Chelsea, winning 30 of the 38 matches to finish seven points clear of Tottenham. 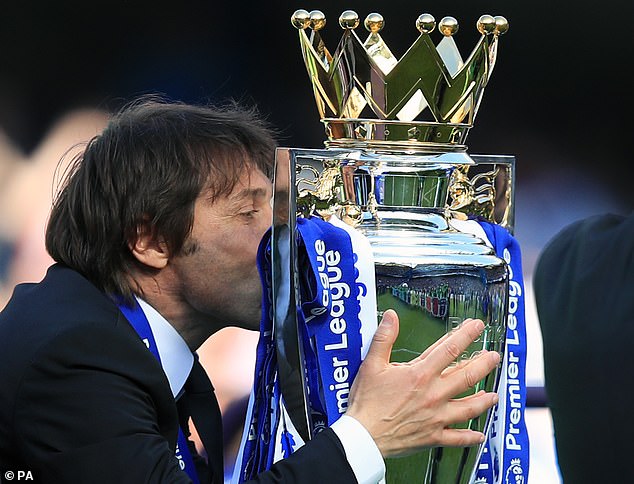 Such feats were never likely to happen at Inter, a club just recovering their strength following years of underachievement since Jose Mourinho departed in 2010.

Indeed, the fact Conte has them keeping pace with Juventus even in the early rounds of the season is a surprise given they’re also in the Champions League and the new players in the squad.

Conte himself had to temper expectations after Inter were held 1-1 at home by Slavia Prague on matchday one of the group stage, saying ‘you seem to think I arrive here, touch and the ducklings turn into swans.’

It’s all looking very similar to Conte’s second season at Chelsea, when the cracks quickly began to appear after the Italian expressed his frustrations early in the season.

He wasn’t happy about the way Chelsea conducted their transfer business and told Roman Abramovich and the club’s hierarchy they wouldn’t be able to compete without big investment in the squad. 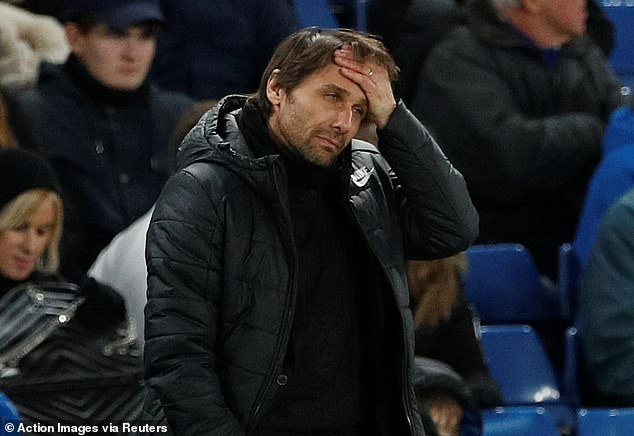 Conte wanted Lukaku but they lost out to Manchester United, while Chelsea also failed to land defensive targets Leonardo Bonucci and Alex Sandro.

He also had strong reservations about the depth of the squad as they returned to Champions League football and questioned the quality of his wider squad.

Inevitably this led to strained relationships in the dressing room, Chelsea finished fifth and ended up in the Europa League, and Conte was arguably vindicated but sacked nonetheless.

The telltale signs are there that history could be about to repeat itself at Inter.