She’s known for her successful acting career and has a packed awards season schedule.

And on Saturday morning, The Queen’s Gambit star Anya Taylor-Joy was spotted making her way through a baggage claim area after her flight arrived at JFK Airport in New York City.

The 25-year-old actress notably carried a sizable Fender guitar case with her as she headed towards the transport hub’s exit.

Loading out: Anya Taylor-Joy was spotted carrying a guitar bag out of the baggage claim area of New York City’s JFK Airport on Saturday morning

Taylor-Joy was dressed in a sizable plaid overcoat worn on top of a brown blouse and a pair of black jeans while spending time in the airport.

She added a bit of pop to her outfit with a pair of partially sequined high-top boots and carried a large leather bag.

The Peaky Blinders actress’ gorgeous platinum blonde hair was tied back in a messy bun at first, although she later let her locks go loose and fall onto her backside.

The performer wore a patterned facial covering to keep herself safe as she made her way through the baggage claim area. 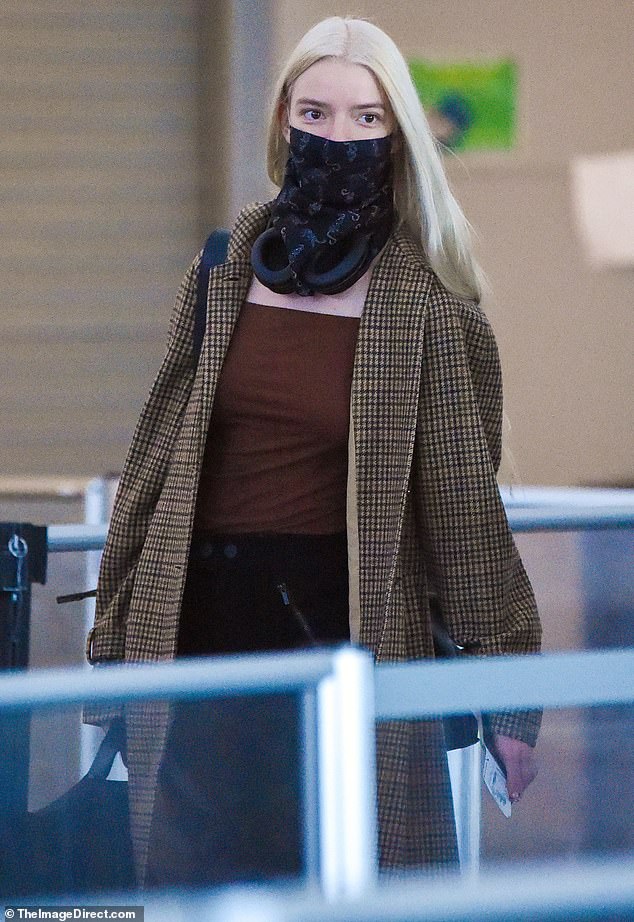 Jet-set chic: The Peaky Blinders actress wore a large plaid overcoat on top of a brown blouse as she picked up her belongings 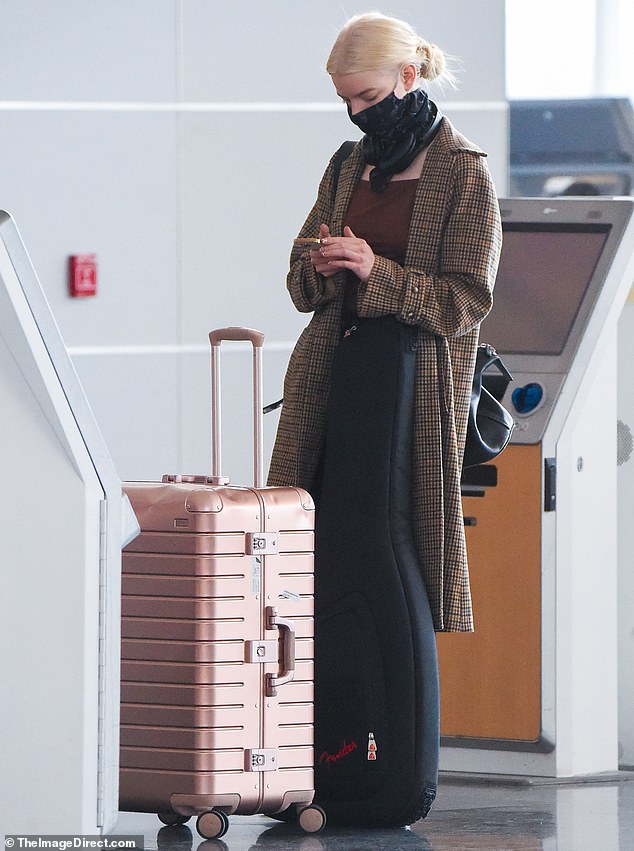 Traveling safe: The performer wore a patterned facial covering for the length of her time in the airport

Development on the George Miller-helmed project began during the production of the third film in the post-apocalyptic series, as the director and his writing partner, Brendan McCarthy, came up with enough material for two separate films.

Production initially began on a potentially Tom Hardy-led movie entitled Mad Max: The Wasteland, although the 76-year-old filmmaker quickly found himself embroiled in a dispute with Warner Bros. regarding a $7 million dollar bonus.

However, Miller, 76, eventually began shifting his interests towards the Furiosa-based story, and in October of last year, it was announced that the project was in advanced stages of development. 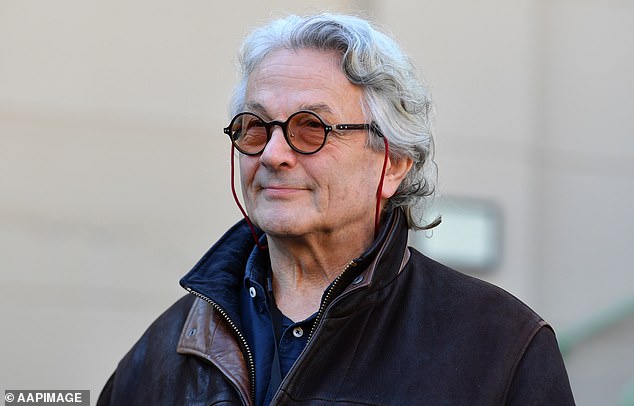 Other performers who are currently involved with the film include Chris Hemsworth and Yahya Abdul-Mateen II, whose roles have not been announced as of yet.

Furiosa is currently set to become Australia’s largest-ever film shoot, and its budget will be largely cushioned by financial incentives from federal and state governments.

During an interview with IndieWire, Taylor-Joy spoke about how she became interested in the character due to Charlize Theron’s work on Mad Max: Fury Road and how she felt that filling the role would be a major undertaking. 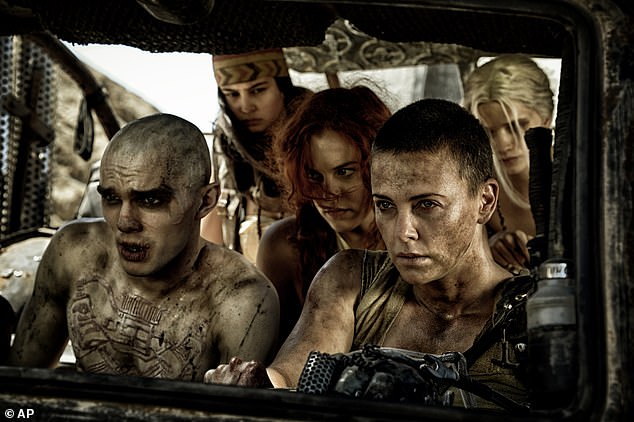 Stacked cast: Other performers who will be involved in the film’s production include Chris Hemsworth and Yahya Abdul-Mateen II; Charlize Theron is seen portraying Imperator Furiosa in 2015’s Mad Max: Fury Road

‘I fell in love with Furiosa because of the way Charlize presented her… It was so beautiful. I can’t even think about trying to step into her shoes. It has to be something different because it just can’t be done,’ she said.

The actress went on to express her excitement about being able to take on a role that would test her mental and physical limits.

‘I always said that I wanted a role that I would have to give everything to, it wouldn’t just be my mind but my body…I’m so excited for that and to push myself past the limits of what my brain thought was possible,’ she remarked. 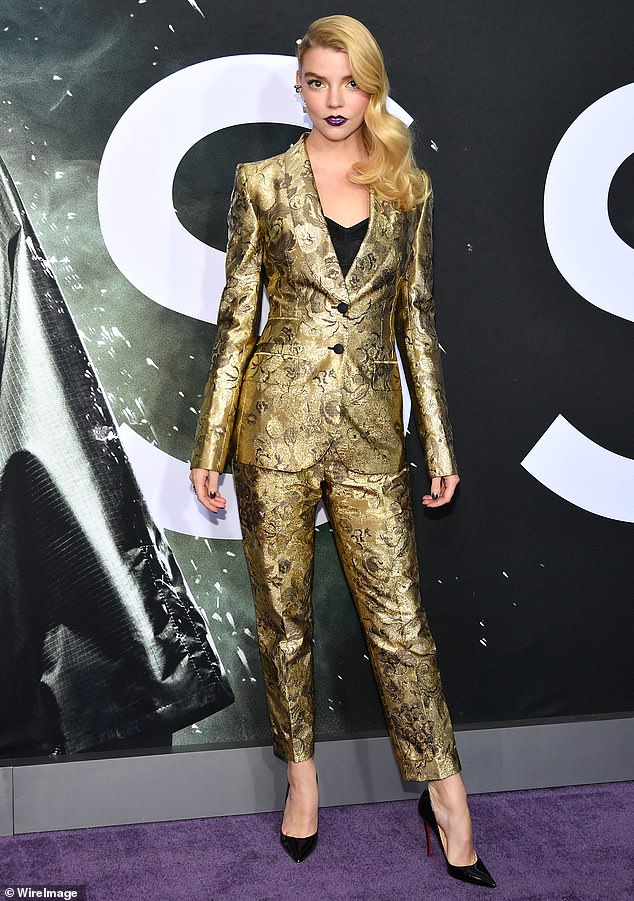 Taking it seriously: During an interview with IndieWire, Taylor-Joy expressed that she was excited to take on a role where she would have to ‘push myself past the limits of what my brain thought was possible’; she is pictured at the 2019 premiere of Glass