Cindy Roberts draped her Aboriginal flag alongside the Australian flag flying at half-mast before the service began in flood-ravaged Lismore, northern NSW, on Monday.

But a local RSL member allegedly refused to let her, stopping her twice and calling in police, sparking outrage among those there and online.

‘It was a huge over-reaction,’ said former Lismore mayor Jenny Dowell who saw the row unfold. ‘It wasn’t a huge protest in any way and was absolutely done respectfully.

Cindy Roberts (pictured) draped her Aboriginal flag alongside the Australian flag flying at half-mast before the service began in flood-ravaged Lismore, northern NSW, on Monday

‘It was embarrassing and awkward and it should have just been allowed to pass without the fuss from the RSL member.’

Ms Roberts – whose family, including her daughter, grandparents and uncles, have served the nation for generations – had already taken part in the dawn service and attended the traditional march to Lismore Memorial Baths for the memorial ceremony.

But when she arrived, the only flag flying was the Australian flag, despite many other venues flying the Aboriginal, Australian and Torres Strait flags, side by side. 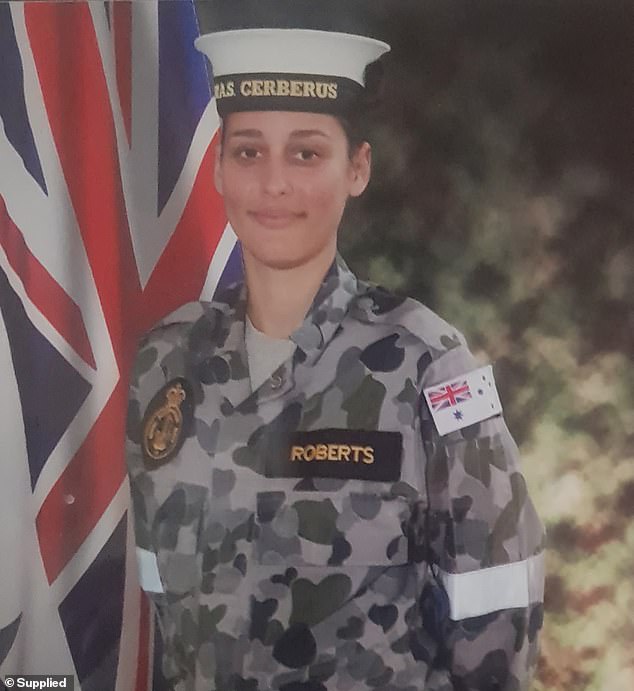 ‘I just wanted to remember my ancestors that had fought in every single war, including the frontier war,’ she told Daily Mail Australia.

‘So I stood and I felt a spirit upon my heart tell me to just lay the flag out. I didn’t put it on the flagpole, I just placed it on the ground underneath the Australian flag.

‘Then I was approached by a member from the RSL and asked to remove the flag.

‘I said, “But my grandfathers and my uncles and my ancestors fought in the wars of this country.” He said, “This is not the time or the place.”

‘I thought. “Well when is the time to bring unity?”‘ 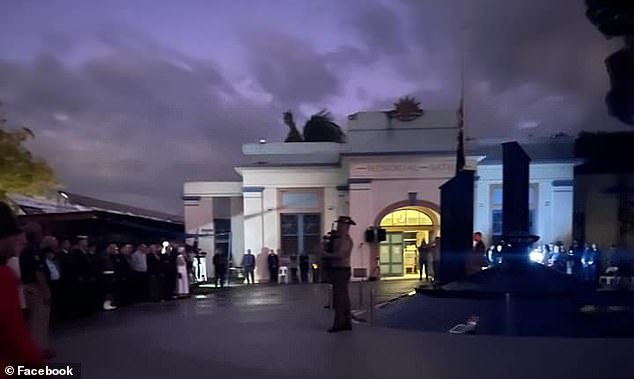 The only flag flying at the Lismore service was the Australian flag, despite many other venues flying the Aboriginal, Australian and Torres Strait flags, side by side

She added: ‘I picked up the flag and walked around to where the wreaths were laid.

‘Then he approached me again and told me to remove the flag again and with the police this time. 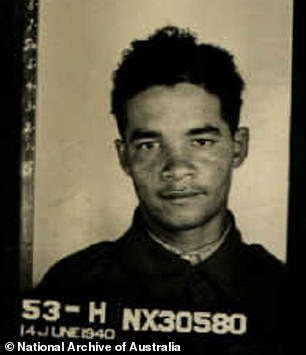 ‘When this happened, I cried. I broke down and everyone saw me but I still stood there in the crowd behind the children with the Aboriginal flag.’

Ms Roberts’ daughter Skye was a ship technician in the Australian Navy for five years and was with her mother at the memorial when the row erupted.

‘Our people have been through so much and I’m tired of them not being acknowledged,’ Ms Roberts said.

‘First Nations people who fought in these wars deserve more respect because they put their lives on the line.’ 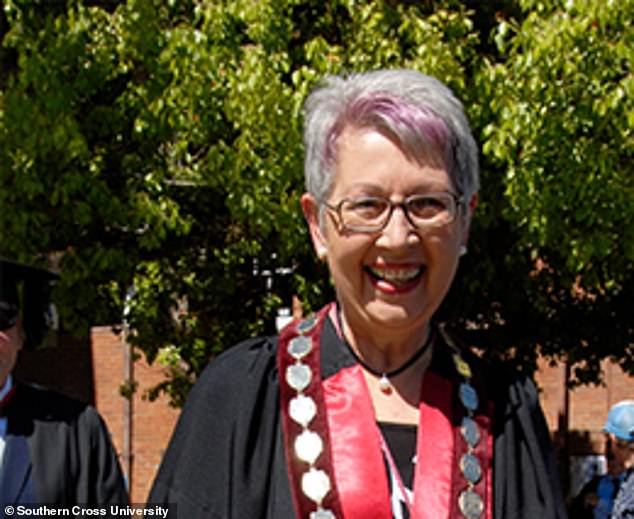 Ms Dowell said she couldn’t understand why Ms Roberts was treated the way she was as she tried in vain to reason with the RSL member.

‘I didn’t quite know what was not appropriate. I thought it was very disappointing – and not one speaker in the whole ceremony even acknowledged country.

‘I thought that was poor. The situation could easily have escalated if Cindy had chosen to do so but she didn’t and many there may not have even noticed.

‘I thought she was very respectful and hopefully we can all learn from this incident – and that it doesn’t happen again.’ 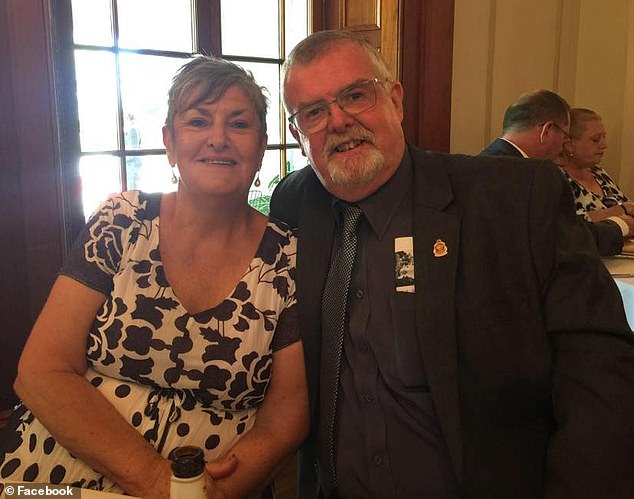 RSL President McClelland said he had been forbidden from discussing the incident.

But he told Daily Mail Australia: ‘I’m extremely disappointed in the whole thing.

‘The people that created this problem have no idea how much work actually went into getting that day on for the community of Lismore yesterday.

An RSL NSW media statement in 2020 appeared to encourage flying all the flags together.

‘The use and placement of flags during commemorative services by RSL NSW follows Australian national flag protocols, which include the flying of the Australian Aboriginal flag and Torres Strait Islander flag,’ it states.

RSL NSW Acting President, Ray James said at the time: ‘Aboriginal and Torres Strait Islander service people have proudly served in conflict alongside their fellow Australians throughout our history.

‘They are recognised as veterans on ANZAC Day and during all other commemorations throughout the year.’ 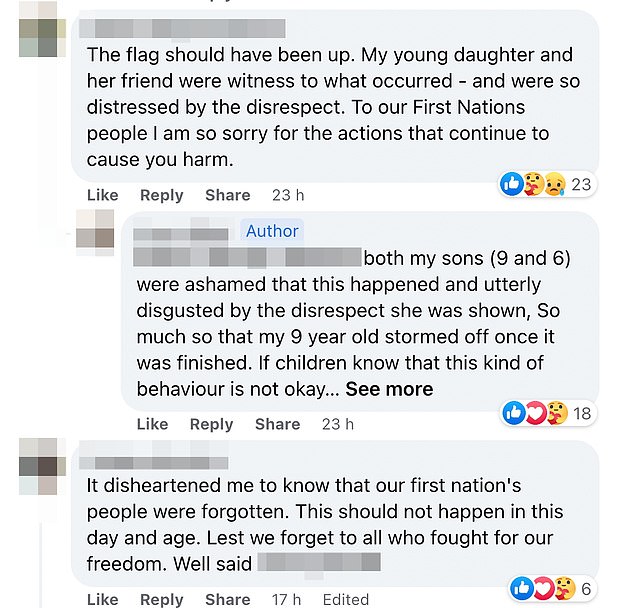 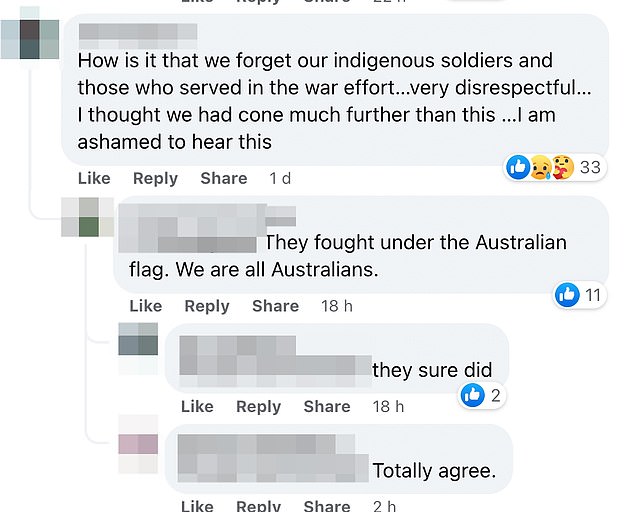 Details of the flare-up appeared on the town’s Facebook group, sparking fury from many in the local community who backed Ms Roberts

Details of the flare-up appeared on the town’s Facebook group, sparking fury from many in the local community who backed Ms Roberts.

‘To the beautiful Indigenous woman advocating to raise the Indigenous flag today at the service following the march, I am beyond apologetic for the utter disrespect you were shown,’ posted one local.

‘I’m so glad someone else has acknowledged and saw this women,’ wrote another. ‘My 11 year old saw the multiple “confrontations” and was so confused as to what the problem was and thought the man was extremely rude.

‘To the woman – we’re both sorry this happened to you today.’

Another said: ‘I am so sorry this happened. It was so disrespectful to ask you to remove the flag.

‘My kids and I were so upset about the blatant refusal to acknowledge our First Nation people today.’ 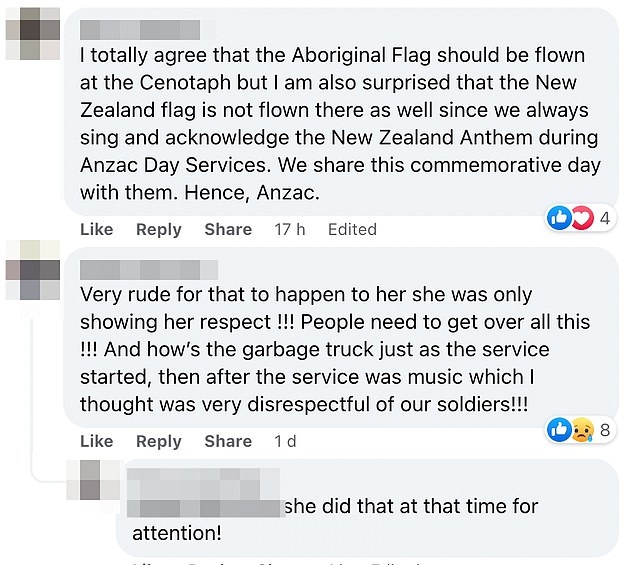 A few however insisted the soldiers had all fought under the Australian flag in wartime and that flag should cover everyone.

‘The thing is, there is protocol. The Aboriginal flag hasn’t been around that long,’ added one. ‘Soldiers etc didn’t fly that flag in battle. It’s not a matter that is solved on a public street.’

Another said: ‘They fought under the Australian flag. We are all Australians.’

RSL NSW did not respond to repeated calls from Daily Mail Australia.