Anzac Day commemorations to honour soldiers and remember fallen heroes will proceed as usual across most of the country.

After two years of disruptions caused by Covid restrictions that prevented large gatherings, the popular marches and dawn services will make a return on Monday.

Some business will be shut for the public holiday but essentials such as supermarkets will be open – as will pubs and, of course, RSLs for the traditional games of two up.

NSW Minister for Veterans David Elliot said the return of Anzac Day public events this year would be particularly special for many.

Anzac Day will go ahead as normal this year (pictured: servicemen look on as part of the ANZAC Observance during the 2022 AFL match between the North Melbourne Kangaroos and the Geelong Cats)

‘It is also the first time since 2019 that veterans will be able to reconnect with mates to attend their annual reunions free of restrictions,’ he added.

Below is Daily Mail Australia’s quick guide to the public holiday – from when and where dawn services will be held, to what shops will be open and when pubs will let in patrons.

In Canberra, Sydney and surrounding regions buses, trains and ferries will be free for anyone attending Anzac Day events.

Brisbane and Melbourne will also have free public transport for veterans, their families, defence personnel and anyone in uniform including Scouts and Guides.

Serving and returned defence personnel in Perth. Adelaide and Hobart can also travel for free. 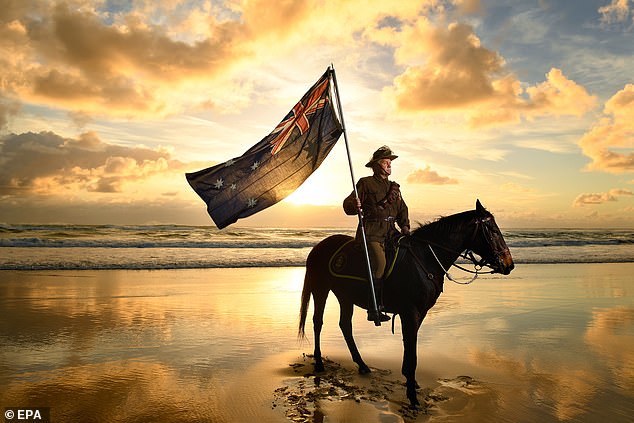 Dawn services will be held in most communities with local RSLs and councils providing information (pictured: Anzac Day 2019 on the Gold Coast)

ACT: Large crowds are expected at the Australian War Memorial for the service led by Governor-General David Hurley at 5.30am.

The service will be broadcast on ABC and ABC iView.

NSW: The state’s official Anzac Day dawn service will begin at 4.30am at the Cenotaph in Martin Place, Sydney CBD.

There will also be community dawn services throughout suburban areas of capital cities and regions in each state and territory – local RSLs and councils will post information.

VIC: Melbourne’s event will be from 5.30am at the Shrine of Remembrance in the CBD.

QLD: The Shrine of Remembrance at Post Office Square will hold the Brisbane dawn service from 4.28am.

On the Gold Coast the dawn service at the scenic coastal spot of Elephant Rock at Currumbin will return after two years.

While in Townsville a service will be held at Anzac Park on The Strand.

The Darwin service begins at 6am at the esplanade Cenotaph. In Palmerston the service will be at Memorial Park also at 6am.

SA: The Adelaide dawn service will begin at 6am on North Terrace in the CBD.

TAS: Hobart’s dawn service will be at the Cenotaph in the Queen’s Domain from 6am and another service at 11.45am.

Launceston’s service will be at 6am at the Cenotaph at Patterson St and another will be at 11am.

WA: At 5.55am the service will begin in Kings Park at the State War Memorial. 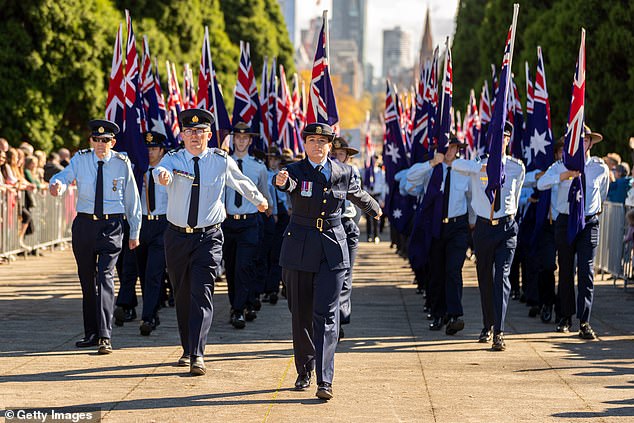 Members of the RAAF are seen marching during the Anzac Day march at the Shrine of Remembrance on April 25, 2021 in Melbourne, Australia

Canberra: The veterans march will begin at 9.30am.

Sydney: The march will begin at Martin Place at 9am and proceed via Elizabeth St to finish at the Liverpool St side of Hyde Park.

Darwin: The annual march will begin at 9am at the esplanade Cenotaph and proceed along Knuckey St.

RAAF F35 fighter jets and Tiger helicopters will also do a fly-past at the Darwin and Palmerston events.

Brisbane: The Anzac Day parade will begin at 10am on the corner of George and Elizabeth Streets in the CBD before proceeding down Adelaide St to Creek St.

Adelaide: The city’s commemorative march will begin at 9.30am on the corner of North Tce and Gawler Place.

Hobart: The Light Horse will lead the march in Hobart at 11am from Town Hall to the Cenotaph.

Melbourne: From 8.30am along Princes Bridge to the Shrine of Remembrance where another commemoration ceremony will take place.

Perth: The corner of Barrack St and St George’s Tce will see the march begin at 9am.

The march will be broadcast on ABC with the RSL recommending only those who have relatives in the march should attend to watch with some Covid restrictions still in place. 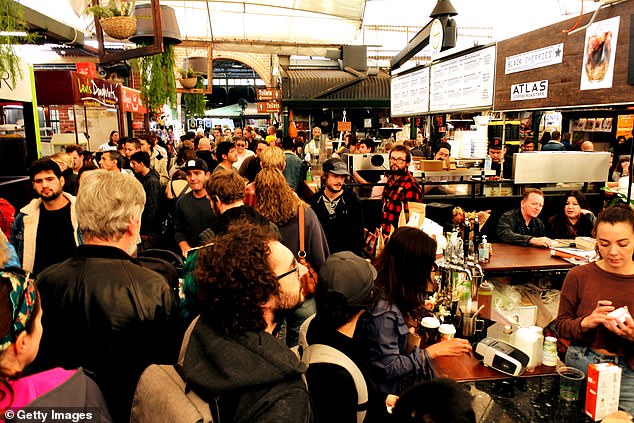 Most shops will be open from midday except in Queensland where they are shut for the whole of Anzac Day (pictured: Fremantle markets in WA)

Woolworths – Open from 1pm in NSW, ACT and VIC. Closed in Queensland and WA. And open in Tasmania and the NT.

Coles – From 1pm in NSW, ACT, and VIC. Closed in Queensland. From 12.30pm in NT and Tasmania. And in SA and WA metro stores are closed but regional stores are open from about midday.

Bunnings – Open in all states and territories except Queensland.

Kmart – Open from 1pm except in Queensland, SA and WA where they will be closed all day.

Dan Murphy’s – Open from 1pm in most states and territories.

Big W – Open with reduced hours in most states and territories except Queensland and WA where they will be closed.

Post Offices and Banks – closed in all states and territories. 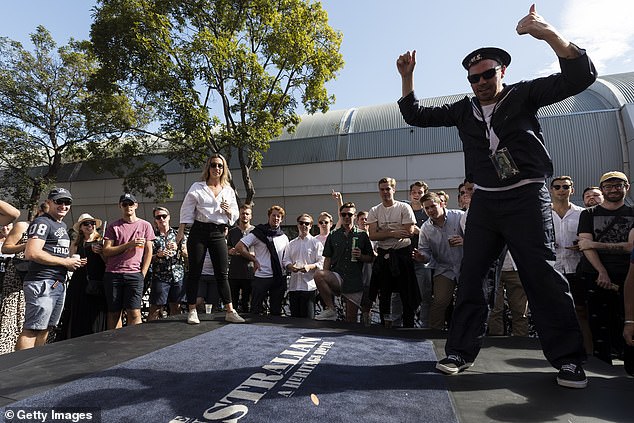 RSL can in most cases trade earlier than their usual licensing hours such as from 5am on Anzac Day.

Gaming licence rules are also relaxed across most states and territories allowing for games of two-up on Anzac Day.

Pubs can serve alcohol from 12pm in Victoria, SA and WA and food earlier.

In Queensland, from 10am to 1pm on Anzac Day liquor may only be sold with a meal.

Take away liquor is not permitted before 1pm but after 1pm normal liquor trading hours apply.

In NSW most pubs can open from 10am.