Alexandria Ocasio-Cortez has suggested the rise in crime in New York City is because ‘desperate’ people are ‘stealing bread to feed their children’.

The Democrat, speaking during a virtual town hall last Thursday, was commenting on plans to defund the police.

Police data shows that shootings in the city last month were up 130 per cent year on the year – from 89 shootings last year to 205 this year.

But Cortez asked: ‘Do we think this has to do with the fact that there’s record unemployment in the United States right now?

‘The fact that people are at a level of economic desperation that we have not seen since the Great Recession?’

AOC on increased NYC crime: “Maybe this has to do with the fact that people aren’t paying their rent & are scared to pay their rent & so they go out & they need to feed their child & they don’t have money so… they feel like they either need to shoplift some bread or go hungry.” pic.twitter.com/oHSTWWJZ6a

Asked about the uptick in crime the congresswoman added: ‘Maybe this has to do with the fact that people aren’t paying their rent and are scared to pay their rent.

‘And so they go out, and they need to feed their child and they don’t have money so they feel like they either need to shoplift some bread or go hungry.’

It comes after a Long Island sheriff warned the city authorities were ‘starting to lose control’.

‘When you see the vandalism in all our own communities – when you see the assaults, you see Molotov cocktails being thrown at law enforcement vehicles, you have to start to realize that, we’re starting to lose control,’ said Errol Toulon, Suffolk County sheriff.

‘And once we start to lose control, we’re not losing control to peaceful protesters, these are criminals,’ he told Fox News.

‘And so once we start to relinquish authority to them, we’re going to have chaos in our streets.’ 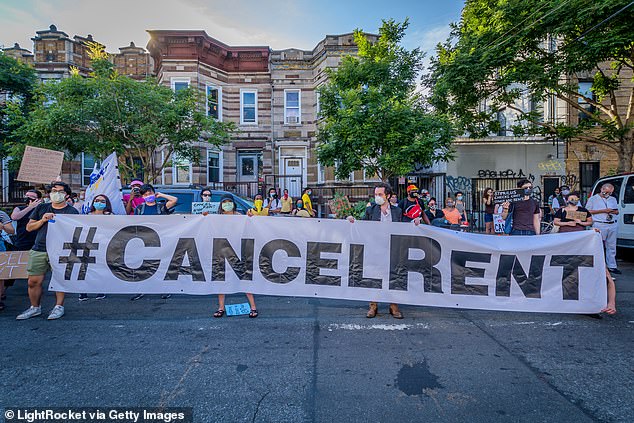 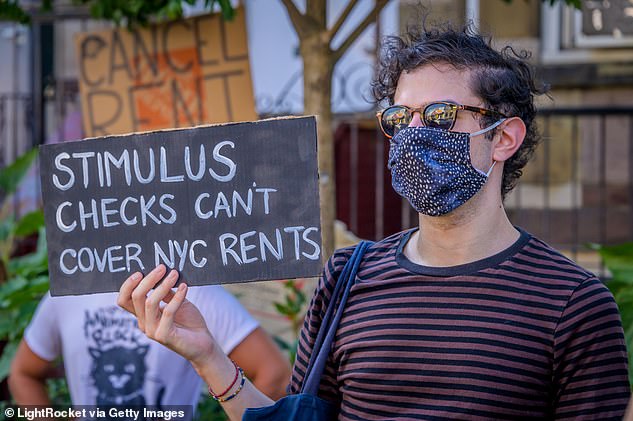 Demonstrators in Bushwick, Brooklyn, called for more help during the pandemic on July 5

Calls to defund the police, reducing the cost of policing and directing the money to social work instead, have proliferated since the May 25 killing of George Floyd in Minneapolis.

De Blasio on Friday asked the NYPD to place more cops at violent hotspots despite having just cut the department’s budget by $1 billion.

The mayor unveiled his new ‘Take Back the Block’ initiative to curb gun violence in the Big Apple saying: ‘We will take back our streets in Harlem and all over our city but we’re going to do it from the ground up.

‘We are going to break the cycle of violence.’

NYPD Commissioner Dermot Shea accused de Blasio of ‘bowing to mob rule’ by cutting the department’s budget and said that the subsequent violence over the Fourth of July weekend was ‘predictable’. 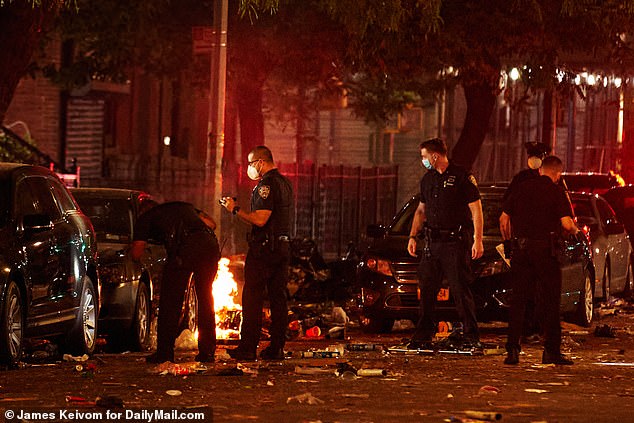 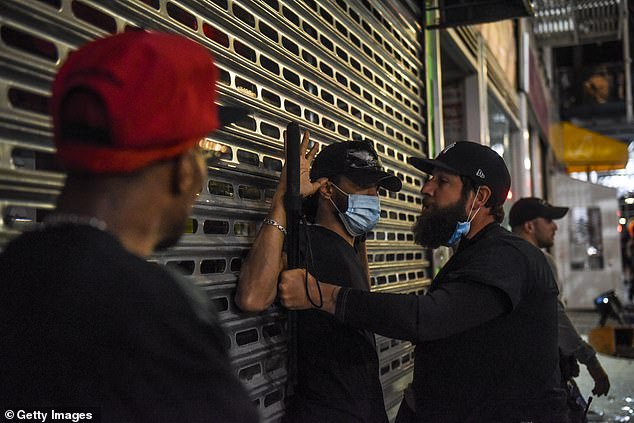 NYPD Chief Terence Monahan also weighed in on the weekend violence on Monday, calling it ‘unacceptable’.

He said the surge was due to ‘a combination of things’, including the pandemic, new reforms and heightened tensions between police and citizens.

‘The animosity toward police out there is tremendous,’ Monahan said.

‘Just about everyone we deal with is looking to fight a police officer when we make an arrest, so it is vital that we get communities together supporting and speaking up for police.’

The mayor acknowledged that the city saw ‘too much violence’ between Friday and Sunday.

But he argued that ‘there is not one cause for something like this’, citing failures by the court system, economic uncertainty and the fact that residents are restless after months in coronavirus lockdown.