Democratic socialist Representative Alexandria Ocasio-Cortez has been widely mocked for saying GOP members are ‘sexual frustrated’ after they branded her a hypocrite when a picture of the staunch mask and vaccine mandate advocate emerged showing her drinking at a Miami bar without a mask.

The New York congresswoman was accused by many of ‘frolicking in free Florida’ while her home state enforced mask mandates, after her Miami lunch date with her boyfriend on December 30.

AOC hit back on New Year’s Day claiming that the backlash came purely because her critics ‘want to date her’.

‘If Republicans are mad they can’t date me they can just say that instead of projecting their sexual frustrations onto my boyfriend’s feet. Ya creepy weirdos,’ she tweeted.

She continued: ‘It’s starting to get old ignoring the very obvious, strange, and deranged sexual frustrations that underpin the Republican fixation on me, women,& LGBT+ people in general.

‘These people clearly need therapy, won’t do it, and use politics as their outlet instead. It’s really weird.’ 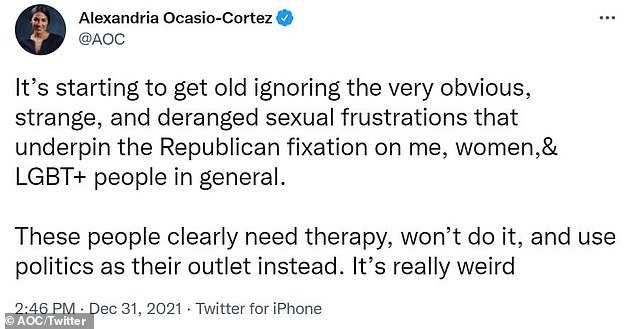 ‘I relate to AOC,’ wrote CNN’s Mary Katharine Ham. ‘Literally every criticism of me boils down to people being disappointed they can’t have sex with me. It is indeed a burden, but one we must bear.’

She followed up the tweet with a meme from Mean Girls.

‘This whole thing just seems bizarrely anti- feminist,’ added Meghan McCain in a now-deleted tweet. ‘So, anytime women’s political choices are criticized we can just say it’s because people want to sleep them? Can’t we just disagree with your tax/climate/mask policies without being involved in this weird sex narrative?’

‘AOC has a seriously exaggerated estimate of her own importance,’ noted Nick Adams.

Even some liberals added to the criticism: ‘Instead of the ‘Republicans have a big crush on me approach’ AOC could have used that moment to teach people about sexism,’ wrote @BidenHarrisBro.

Ian Haworth, editor of Daily Wire, tweeted: ‘I definitely do not want to date you.’

Ocasio-Cortez replied: ‘I’m glad you felt the need to share that with the world. Don’t worry, this is a totally normal thought to have and share as an editor of a right-wing website, and totally doesn’t prove my point at all.

‘I hear if you say it enough times you’ll actually start to believe it.’

She concluded with an attack on Haworth’s conservative site.

‘The fact that these people are so creepy/weird yet are also the ones responsible for shaping the NEWS HEADLINES we all see in media should be really concerning.

‘I don’t even want to know what knuckle-dragging thoughts these people have all day while covering women in politics.’ 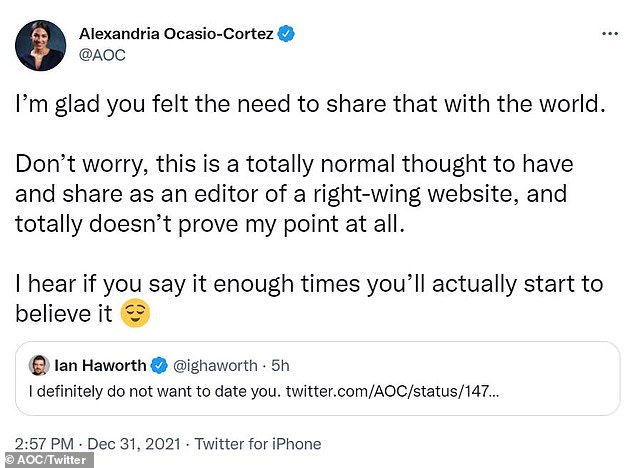 The liberal progressive had been responding to backlash from Republicans who welcomed her to enjoy a ‘taste of freedom’ while in Florida as they pointed out her mask was nowhere to be seen.

‘2. Her guy is showing his gross pale male feet in public (not at a pool/beach) with hideous sandals.

Ocasio-Cortez shared the tweet and replied with scorn, calling Cortes a ‘creepy weirdo’ for her remarks about her boyfriend’s Birkenstock sandals.

Brian Mast, a Republican congressman for Florida, wrote on Twitter: ‘Welcome to Florida AOC. Leave your politics in New York and enjoy a taste of freedom in our great state!’

Shawn Farash, who runs the conservative group Long Island Loud Majority, said her visit amounted to an endorsement of DeSantis.

Republican anger was in part retaliation for her own criticism of Ted Cruz, the Republican senator for Texas.

In February, Ocasio-Cortez demanded Cruz resign for making a trip to Cancun with his family while Texas was ravaged by a deadly winter storm.

‘If Sen. Cruz had resigned back in January after helping gin up a violent insurrection that killed several people, he could’ve taken his vacation in peace,’ she tweeted ​at the time.

‘Texans should continue to demand his resignation.’

In September 2021, in response to a thread on the storms in New York, she tweeted: ‘I know Republicans’ idea of ‘disaster relief’ is flying to Cancun while the power’s still out, but unlike that approach I actually give a damn.’

Residents have been forced to line up for hours for tests and many are planning to spend New Year’s Eve at home, with restaurants closing and amid fears of the Omicron surge.