AOC shows her followers around her unfurnished Washington apartment

Alexandria Ocasio-Cortez has revealed she still sleeps on a mattress on the floor inside her unfurnished Washington apartment – despite being elected to Congress six months ago.

The Democratic Rep. sipped on a glass of white wine and assembled IKEA furniture as she made the comments during an hour-long Instagram Live video broadcast to her 3million followers.

In the opening minutes of the clip, she joked: ‘My apartment is like unfurnished. I’ve been living like a completely depraved lifestyle. 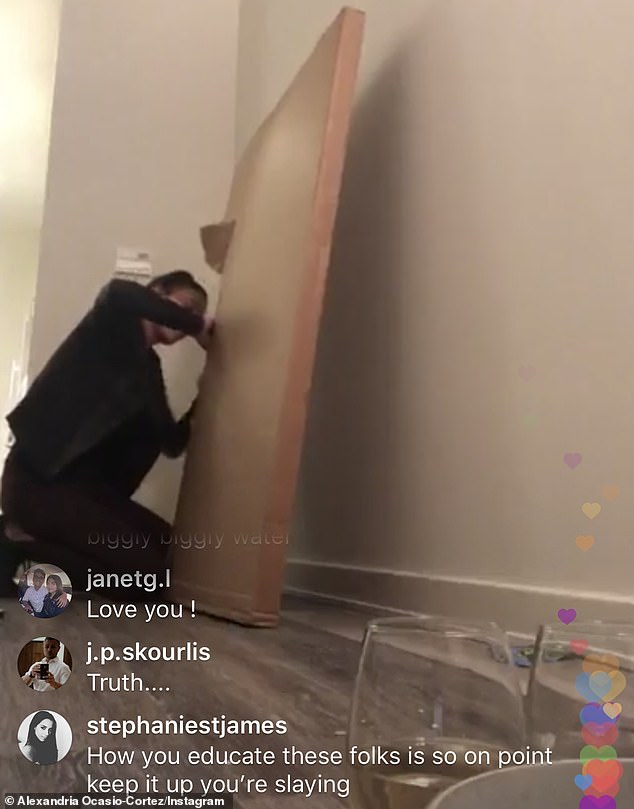 The Democratic Rep. said her busy work schedule has prevented her from buying furniture – as she fielded questions from viewers and built a desk (shown) 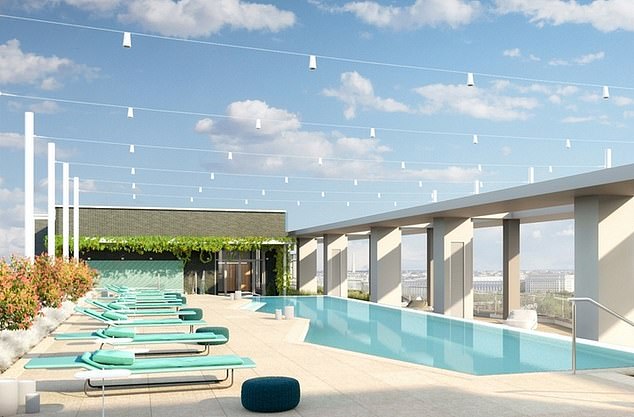 AOC’s apartment building comes with a shared pool and will cost anywhere between $2,000 and $5,000 a month 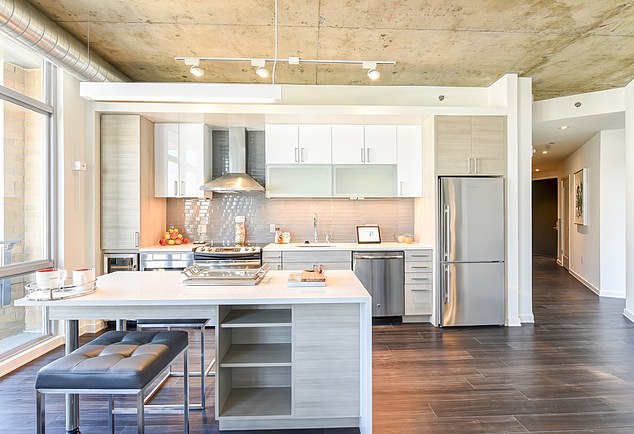 The plush, modern pad will look similar to this architect drawing as the congresswoman is still yet to furnish it

She added: ‘I’ve been sleeping on a mattress on the floor,’ and revealed the mattress was still in its plastic wrapping.

Ocasio-Cortez said her busy schedule had prevented her from furnishing the luxury apartment that comes with a shared infinity pool and a nearby Whole Foods.

She said: ‘I got sworn in January 3, today it’s April-something and I still don’t own a chair.’

The freshman lawmaker claimed it was difficult to shop for furniture because she goes to work ‘before any stores open’ and by the time she returns ‘they’re all closed’. 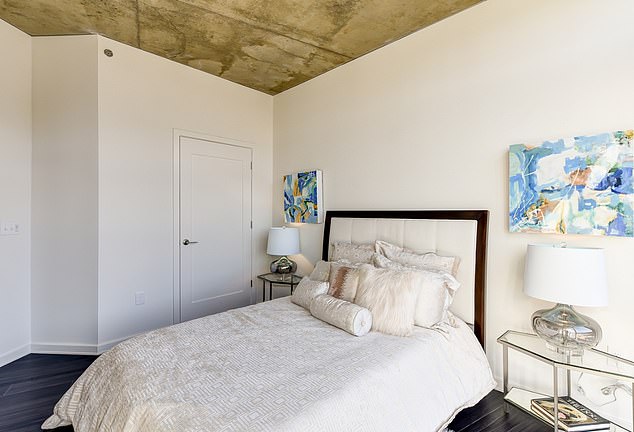 The Bronx-born socialist then fielded questions from some of the 8,000 viewers who tuned in while assembling a tray table and desk.

When asked by a fan for tips on time management, Ocasio-Cortez replied ‘I don’t think I’m a good person to ask’.

She explained that she puts ‘basic human functions like sleeping, eating and drinking water.’ 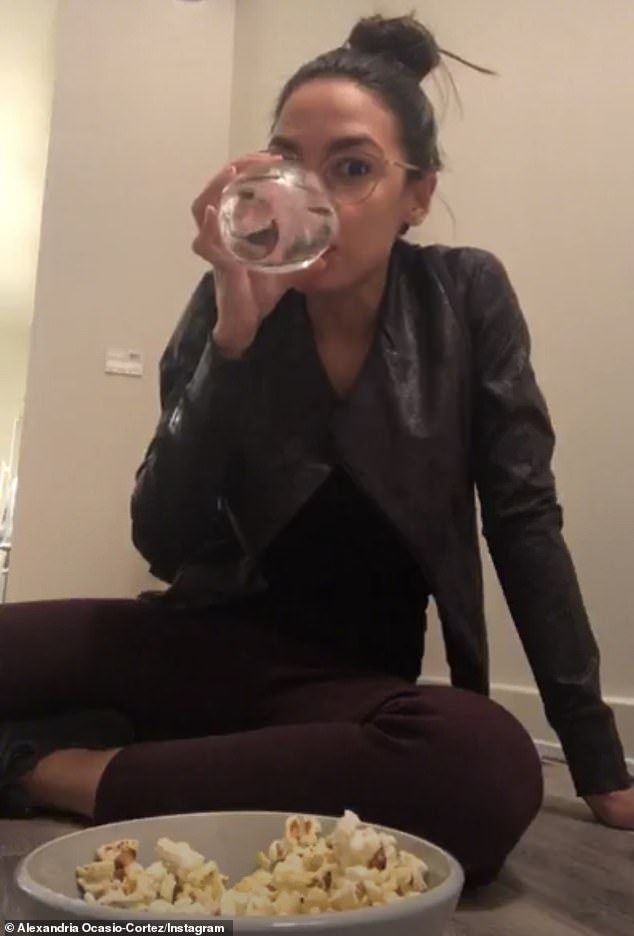 She sipped on a glass of wine and tucked into some popcorn during the opening minutes of the clip and joked: ‘My apartment is like unfurnished. I’ve been living like a completely depraved lifestyle’

When answering why she feels the GOP is out to get her, Ocasio-Cortez said it’s because she ‘confronts them directly.’

She said her confrontations cause Republicans to ‘act like the girl in The Exorcist that’s like vomiting pea soup’.

The congresswoman went on to discuss an array of topics including why President Donald Trump hasn’t released his tax returns and her opinion on whether Puerto Rico should become the 51st state. 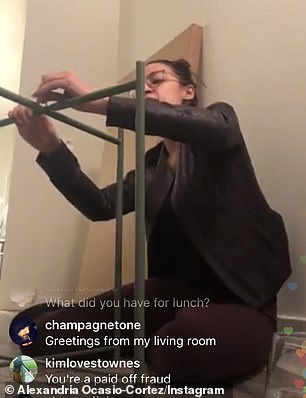 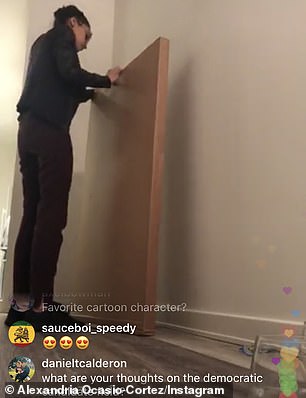 The Bronx-born socialist, who take in $174,000 annually with her congressional salary,  assembled a tray table and desk during the hour-long video

But she focused heavily on her ambitious new climate change program the Green New Deal, that seeks to reduce the United States carbon emissions to zero by 2050.

She warned those who oppose her policy the internet ‘documents everything’ and ‘your grandchildren will not be able to hide the fact that you fought against acknowledging and taking bold actions on climate change.’

Ocasio-Cortez defended her claim that the world could end in 12 years due to global warming.

‘We have 12 years left to cut emissions by at least 50 percent, if not more, and for everyone who wants to make a joke about that, you may laugh but your grandkids will not,’ she fumed.

The 29-year-old went on: ‘You look back and you open history books on the Civil Rights movement, and you see those folks who are protesting against the ability for African Americans and black Americans to have the right to vote.

‘Just know, that in the present day, there are a lot of people who hide the fact that their families and that their grandparents fought against principles of equal rights in the United States.

‘People who are trying to mock and delay this moment, I mean, I just feel bad for you. I just pity you for your role in history right now.’

The congresswoman, who makes $174,000 annually with her congressional salary, rents the property in the posh Navy Yard neighborhood, which ironically is also a favorite of President Trump’s staffer. 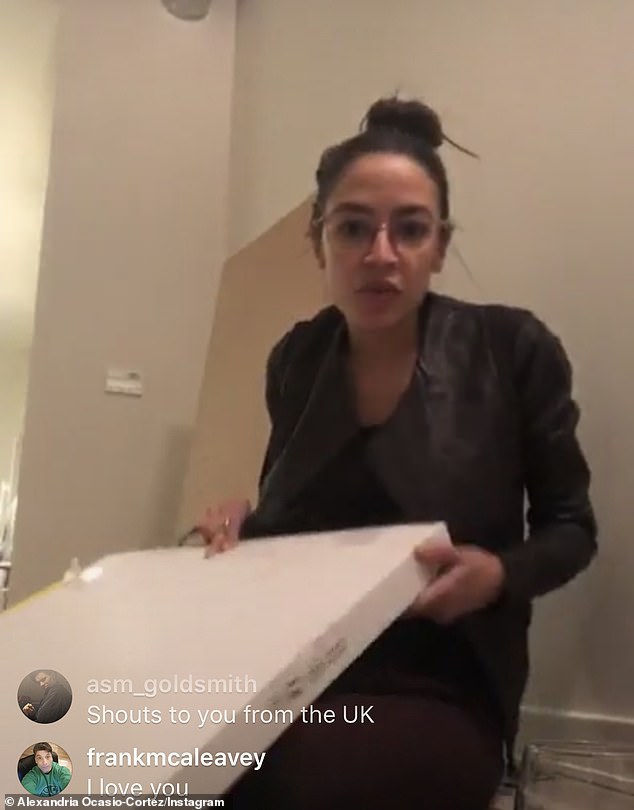 AOC rents the property in a posh DC neighborhood, which ironically is also a favorite of President Trump’s staffer

Last year Forbes magazine named the Navy Yard neighborhood one of the 12 coolest in the world.

It’s the fast growing area in the nation’s capitol and features the Nationals Ball Park; District Winery, the only winery in the city; beer gardens; posh restaurants and expensive workout studios like SolidCore and Pure Barre.

The Yards Park – situated on the banks of the Anacostia River – contains a fountain, outdoor concerts, outdoor workout classes, restaurants, and speciality shops.

And the city is building a soccer stadium in the area.

Her neighborhood also contains a Whole Foods, which is owned by Amazon, the company Ocasio-Cortez has railed against for its corporate practices.

She celebrated when Amazon announced it would not be building a second headquarters in Queens, New York, near her congressional district.

She was spotted shopping in the Whole Foods in her new D.C. neighborhood sometime in February, Politico’s Playbook reported, after moving in the previous month.

What her building doesn’t offer is affordable housing – a platform the self-described socialist campaigned on in her bid to become the youngest female member of Congress.

Housing affordability was a major campaign issue for rising Democratic star and helped her defeat Democrat Rep. Joe Crowley in the June primary, a victory that shocked the Democratic establishment.