Alexandria Ocasio-Cortez has denounced the NYPD’s new crime-fighting robot dog, appearing to accuse the department of racism for deploying the device for testing in only low-income communities of color.

The Democratic firebrand blasted the police department’s four-legged ‘Digidog’ in a succession of Thursday tweets, two days after the cyber hound was filmed responding to a home invasion in her home borough of the Bronx.

‘Shout out to everyone who fought against community advocates who demanded these resources go to investments like school counseling instead,’ she wrote.

‘Now robotic surveillance ground drones are being deployed for testing on low-income communities of color with under-resourced schools.’

Ocasio-Cortez then argued that police funding that allows for new technology like the Digidog would have better served the community if it had been allotted to programs for education or housing.

‘Please ask yourself: when was the last time you saw next-generation, world class technology for education, healthcare, housing, etc consistently prioritized for underserved communities like this?’ she added in a follow-up tweet.

Digidog, which was designed by Boston Dynamics and has a starting price of around $75,000, joined the NYPD last year. It was given a test run in the Bronx on Tuesday 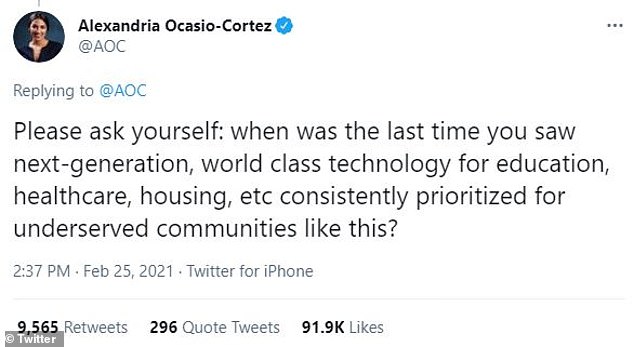 Digidog, which was designed by Boston Dynamics and has a starting price of around $75,000, joined the NYPD last year.

The blue and black rover, which weighs approximately 70 pounds, is equipped with lights, two-way communication, and video cameras, the department said.

The robot is fitted with cameras to search an area and send back real-time footage and is powered by artificial intelligence to navigate on its own.

The cyber canine can also climb stairs, see in the dark, and run at about three-and-a-half miles an hour. It was designed for emergency situations that would otherwise be too dangerous for human officers.

Digidog is currently being tested by the NYPD’s Technical Assistance Response Unit, which deployed it at a home invasion and barricade situation on East 227th Street near White Plains Road in Wakefield on Tuesday.

Two men were reportedly being held hostage in a Bronx apartment. They had been threatened at gun point, tied up and tortured for hours by two male assailants who pretended to be plumbers to gain access to the home.

One of the victims managed to escape and called the police.

Digidog was deployed and helped officers determine that the armed suspects were no longer inside the home.

The police said they were still searching for the two men, who stole a cellphone and $2,000 in cash and used a hot iron to burn one of the victims.

Digidog was also previously deployed in Brooklyn in October to help find a gunman hiding in a basement, and was also used in a hostage situation in Queens the following month.

The robotic dog is also currently being used by the Massachusetts State Police and the Honolulu Police Department.

Residents in the Bronx, New York stopped dead in their tracks as a four-legged robotic dog trotted down East 227th Street Tuesday 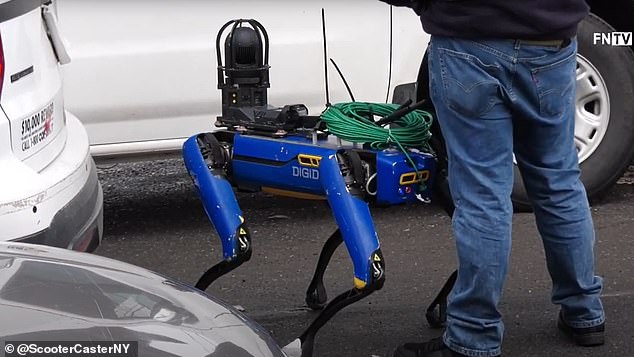 The blue and black rover, which weighs approximately 70 pounds, is equipped with lights, two-way communication, and video cameras, the department said

‘The N.Y.P.D. has been using robots since the 1970s to save lives in hostage situations & hazmat incidents,’ the department tweeted last week. ‘This model of robot is being tested to evaluate its capabilities against other models in use by our emergency service unit and bomb squad.’

However, Ocasio-Cortez isn’t the only person to criticize the NYPD’s newest robotic gadget.

The act requires the Police Department to be more transparent about its surveillance and technology tools, including Digidog, something critics say had long been lacking.

Similarly to Ocasio-Cortez’s concerns, Jay Stanley, a senior policy analyst with the American Civil Liberties Union, told the New York Times that empowering a robot to do police work could have implications for bias, mobile surveillance, hacking and privacy.

‘We do see a lot of police departments adopting powerful new surveillance and other technology without telling, let alone asking, the communities they serve,’ he said. ‘So openness and transparency is key.’ 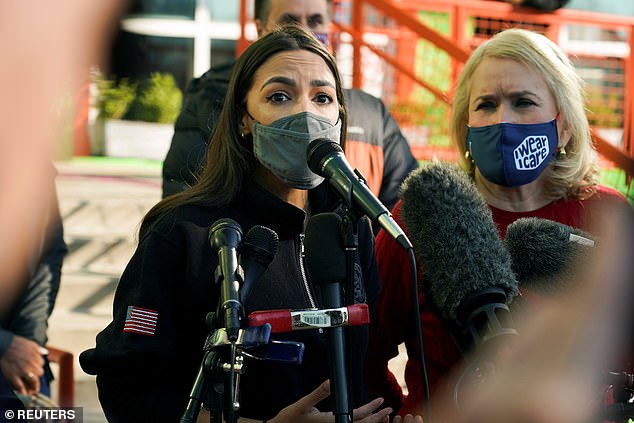 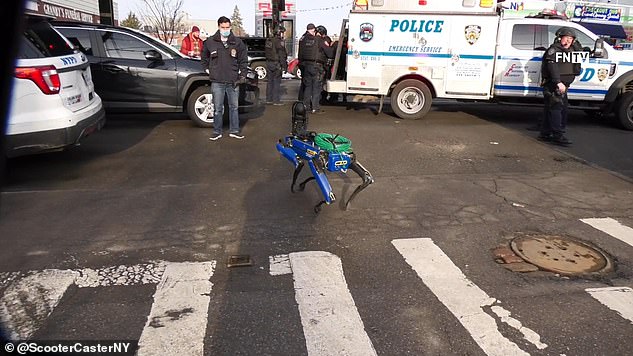 Digidog is currently being given a test-run by the NYPD’s Technical Assistance Response Unit, who deployed it at a home invasion and barricade situation on East 227th Street near White Plains Road in Wakefield on Tuesday 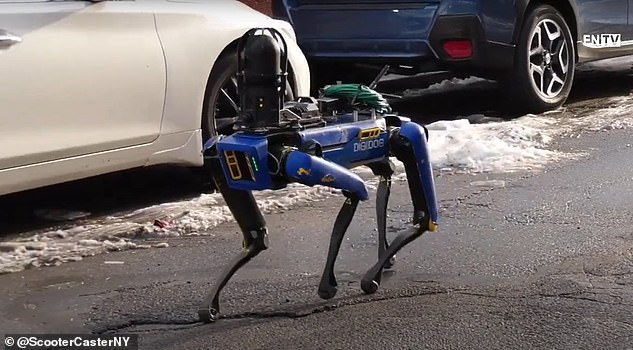 ‘An army of robots with gun arms is not kicking down your door to arrest you,’ he said. ‘Instead, a robot snitch that looks like a rolling trash can is programmed to decide whether a person looks suspicious—and then call the human police on them.’

‘[While] police robots may not be able to hurt people like armed predator drones used in combat – yet – as history shows, calling the police on someone can prove equally deadly.’

‘The next time you’re at a protest and are relieved to see a robot rather than a baton-wielding officer, know that that robot may be using the IP address of your phone to identify your participation,’ he said. ‘This makes protesters vulnerable to reprisal from police and thus chills future exercise of constitutional rights.’

There is also concern that the robot could be paired with other technology and be weaponized – much like in 2016 when cops in Dallas rigged a police bomb disposal robot with explosives to blow up a sniper who’d killed five officers. 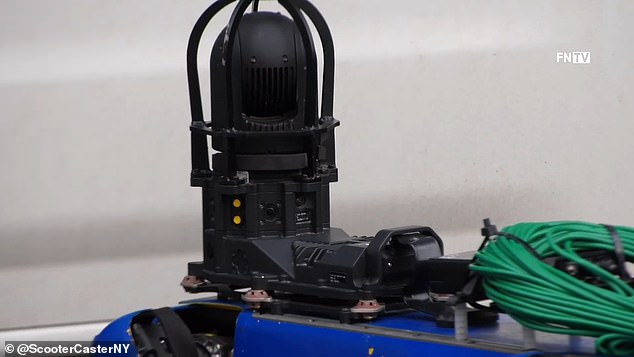 It is also capable of two-way communication, for example, if an officer needs to talk with a suspect they are able to without getting in harm’s way

Boston Dynamics has previously say it doesn’t want its robotic dog – originally called Spot – to be weaponized, with lease agreements subject to a clause requiring the robot not be used in a way that would ‘physically harm or intimidate people’.

Keith Taylor, a former NYPD SWAT team sergeant, however, believes the Digidog has ‘tremendous potential’ to limit injuries and fatalities.

‘It’s important to question police authority, however this appears to be pretty straightforward,’ he said. ‘It is designed to help law enforcement get the information they need without having a deadly firefight, for instance.’

In San Jose, California in 2015, a man with a knife who threatened to jump of a bridge was safely brought into custody after the police had a robot bring the man a cellphone and a slice of pizza.

The year prior, police in Albuquerque used a robot to ‘deploy chemical munitions’ in a motel room where a man had barricaded himself with a gun. He later surrendered without incident, police said.