An app that allows men to test the health and strength of their sperm from the comfort of their own home is now available on Amazon in the US and UK for the first time.

YO Home Sperm Test turns a smartphone camera into a microscope lens, powerful enough to assess a tiny sample which is dropped onto a slide and inserted into a phone clip.

The FDA and CE-cleared device – said to be 97 percent accurate – is the only test of this kind that analyses motile sperm concentration – the number of moving sperm.

It was previously only available on the manufacturer’s website but can now be delivered by the retail giant for $59.95/£56.

The app’s developers claim it will save millions of men the often embarrassing process of going to doctor’s office.

It says other home tests report sperm concentration (the number of sperm), but your sperm could all be dead or not moving and you might still get a ‘normal’ result. With YO, which also shows you a live video of your sperm, you’re testing the swimmers – the ones that have a chance to reach an egg.

YO Home Sperm Test is an app that has been developed to test men’s motile, or moving, sperm count from the comfort of home 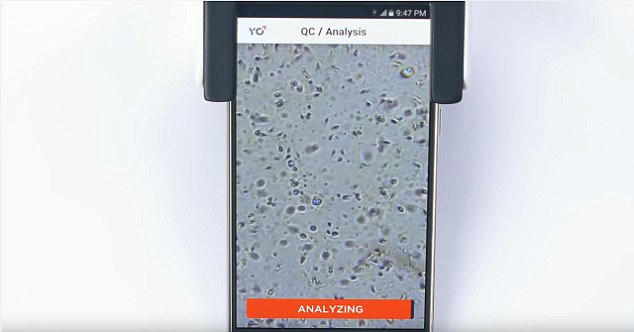 Users fill a sample cup and then mix it with a powder. After letting it sit, it is inserted into an attached phone clip, which analyzes the sample for sperm count and motility

HOW THE YO HOME SPERM TEST APP WORKS

Following a download of the app, users purchase a starter kit that comes with a collection cups, liquefying powder to mix with the sample, testing slides, a plastic pipette and a YO clip.

The clip attaches to your Android or iPhone to take a video of your sample.

To begin testing, users collect their sample in the cup.

Then, one vial of liquefying powder is added and the sample is gently mixed for between 10 to 15 seconds.

Next, users set aside the sample, which will turn slightly pink, for about 10 minutes.

Once the sample is ready, users mix it again and draw some of it into the pipette.

Then, on the testing slide, some of the liquid is placed on a red dot, which will slowly fill the base of the slide.

The filled slide is finally placed into the YO Clip all the way and then users tap ‘start testing’.

In about 30 seconds, the app take a video of the sample and then spends a couple of minutes analyzing before the video appears on the screen along with a sperm count and motility.

A couple is said to be infertile if there is no pregnancy after one year of normal sexual activity without contraceptives.

In approximately 40 percent of infertile couples, the male partner is either the sole cause or a contributing cause of infertility.

Researchers have recently claimed the Western lifestyle has more than halved the sperm count of men in the US, Europe and Australia since the 1970s.

Stress, smoking, drinking too much and eating unhealthy food were named as contributing factors. Studies also reveals sperm quality is affected by chemicals found in soap, sunscreen and plastic.

In a statement, the firm’s CEO Marcia Deutsche said: ‘We developed the YO Home Sperm Test to give men a simple, affordable and accurate way to test their fertility at home, in private.

‘Couples are realizing that coping with infertility is a shared journey. So now while monitoring and testing the woman, there is also an easy way to test her male partner using the YO Home Sperm Test.

‘Having the kit available on Amazon makes YO easy to purchase.’ 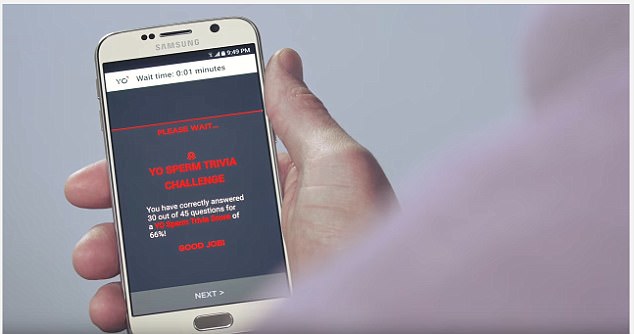 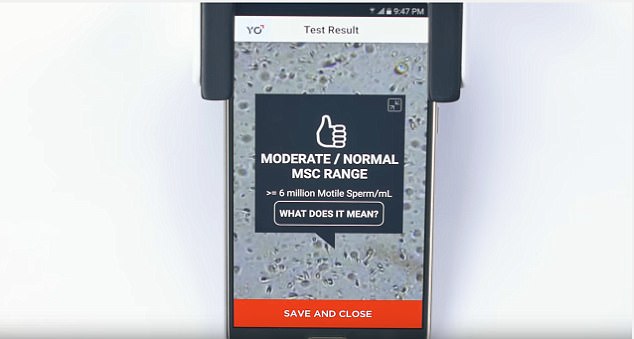 In approximately 40 percent of infertile couples, the male partner is either the sole cause or a contributing cause of infertility 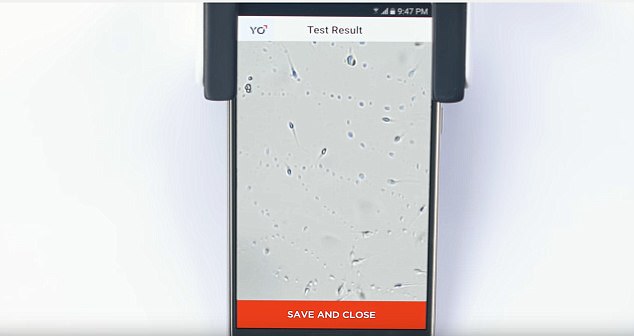 Many fertility treatments have been geared women in the form of apps or drugs. CEO Marcia Deutsche said: ‘No other company is tackling male reproductive health in this manner’

HUGE DROP IN SPERM COUNT COULD LEAD TO HUMAN EXTINCTION

Humans could face extinction if sperm counts continue to drop as fast as they have done in the last four decades in Western countries, a study warned.

Scientists claim the Western lifestyle has more than halved the sperm count of men in the US, Europe and Australia since the 1970s in research published in July by Human Reproduction Update.

Sperm count is the best measure of male fertility, and lead author Dr Hagai Levine said the findings are an ‘urgent wake-up call’ to investigate lifestyle factors, chemicals and environment that could cause the human species to go extinct.

‘If we do not make a drastic change to how we live and the chemicals we are exposed to I am worried about the future,’ he told Daily Mail Online.

‘I think the data serves as a wake up call, because I am personally worried about that [human extinction] if we do not address current environmental issues.’

Researchers at Hebrew University-Hadassah Braun School of Public Health and Community Medicine and the Icahn School of Medicine at Mount Sinai looked at 185 studies collected between 1973 and 2011 regarding sperm count and concentration in men from North America, Europe, Australia and New Zealand.

Decline in sperm rate has previously been linked to environmental and lifestyle influences such as prenatal chemical exposure, adult pesticide exposure, smoking, stress and obesity.